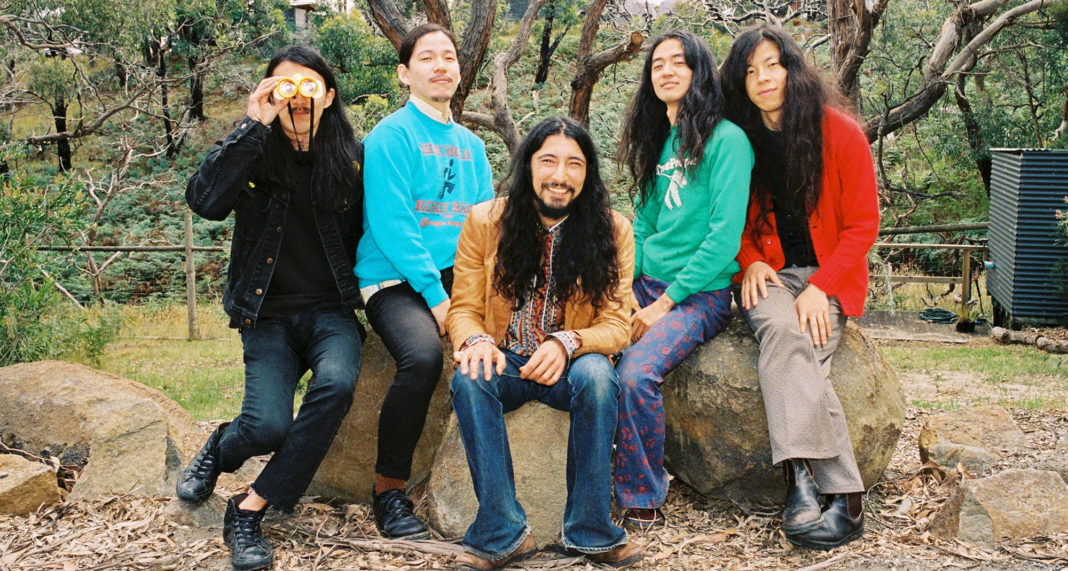 It’s dinnertime in Amsterdam when I get Go Kurosawa on the phone for our interview.

‘It’s okay, I can talk and eat,’ says the Kikagaku Moyo drummer, declining my offer to call him back in 20 minutes. He’s obviously being polite, keeping to the agreed-upon time, but he’s also a busy man these days. At 33, he’s spent the last few years touring almost non-stop with Kikagaku Moyo, co-running his DIY Asian psych record label, Guruguru Brain, and putting out a new album or EP every year since 2016. A mid-dinner interview isn’t a big deal.

Kikagaku Moyo formed as a jam band in Tokyo back in 2012, and their sound ranges from riff-heavy rock and roll to dreamy sitar-laden psych. They first came onto my music radar at Gizzfest a few years ago, when I stumbled upon these five handsome, longhaired Japanese men who had the crowd enchanted. Their set was both tight and loose, as if they were jamming spontaneously, but never failing to reel it back in and kick into the next phase. The paradox that really grabbed me though, was how they appeared so humble and yet so utterly sure of themselves on stage.

Kurosawa tells me that Kikagaku Moyo cut their teeth on the streets of Tokyo, busking outside busy train stations. ‘We could play any time and however long,’ says Kurosawa. ‘And if people stop by, you have to end [the song] at some point so people can clap or pay or something. So we have this kind of talent where we play long jams but we have to also make sense for listeners.’

Kikagaku Moyo took to busking because the live music venues in Tokyo had a policy of charging bands, rather than paying them, to play gigs. This was a massive issue for the band. ‘We wanted to shut down almost all the Tokyo venues, that was our motivation,’ Kurosawa laughs. ‘We tried to make this band union and fight this kind of system where the bands have to pay to play. So we told all the cool bands not to play in these venues.’

In defiance, Kikagaku Moyo started putting on psych festivals around Tokyo and charging the equivalent of about $5 for entry. The aim was to cultivate a cheap and accessible DIY music scene from scratch. But Kurosawa says that ultimately, it didn’t really work out. This was partly because in Japan, ‘most people don’t like this kind of thing, they like following the rules’. And then there was the crowd; the people who showed up at these psych festivals were mostly foreigners. ‘We started thinking we should get off this island and maybe try to play other countries.’

They went on to tour Australia, Europe and the States. Kurosawa moved to Amsterdam a year and a half ago, along with guitarist, vocalist and record label co-founder Tomo Katsurada. The other three members, Daoud Popal, Ryu Kurosawa and Kotsu Guy, still live in Tokyo. But Amsterdam has become the band’s base, partly because it has a healthier live music scene than Tokyo, but also because it’s a good launching point for touring Europe. 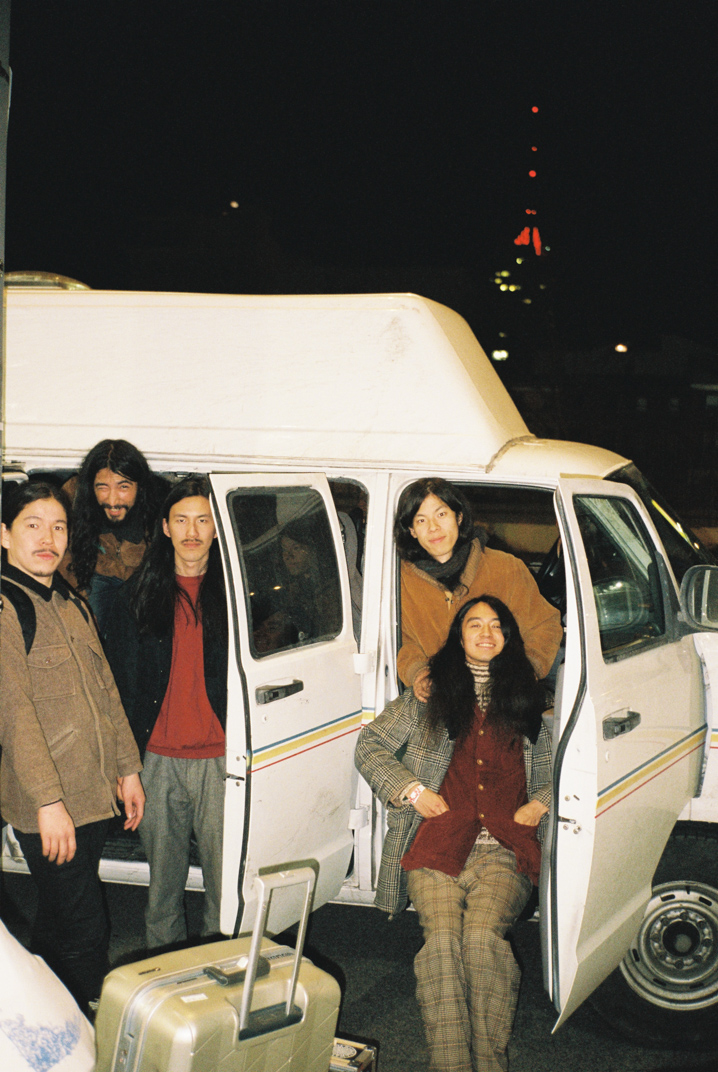 Kurosawa admits that Kikagaku Moyo are now much bigger internationally than in Japan. Their latest release, Masana Temples, came out in late 2018 and was heralded by several critics as one of the best albums of the year. It’s a happy album that was written in multiple countries and recorded in Lisbon (with jazz legend Bruno Pernadas) during summer. The theme of the album is ‘masana’, a made-up word that the band coined on tour, which loosely translates to being nomadic or transnational.

As Kurosawa puts it, ‘Being on tour and being in a different country every day, we wanted to express that feeling… almost like we are not belonging anywhere.’ For a band who have made it bigger internationally than domestically, whose members live in two different continents, and whose lyrics are indecipherable to most of their fans, it kind of makes sense. But rather than being dislocated, it’s more universal, celebrating the idea that by and large, people are pretty similar all over the world.

I comment to Kurosawa that ‘Kikagaku Moyo’ is a pair of words that took me ages to remember and which I’m still probably mispronouncing. ‘Sorry for that,’ he laughs. The name translates to ‘geometric patterns’ but he doesn’t seem to care whether English-speaking fans comprehend Kikagaku Moyo lyrics or not. ‘I grew up listening to Western music and I never understood lyrics… I also feel like I’m missing out on something but I can feel when good music is good music. And why shouldn’t people from other countries feel that?’

Outside the context of Tokyo, Kikagaku Moyo is sometimes classified as ‘world music’, which is a genre that doesn’t mean much, except that it encompasses anything non-white and non-English speaking. Kurosawa points out that, as it stands in the music industry, nearly everything is in English, regardless of where it comes from. This is partly why he and Tomo Katsurada founded their record label, Guruguru Brain. It’s a reaction to, ‘this kind of monoculture thing.’

Although based in Amsterdam, Guruguru Brain is specifically a platform for giving Asian bands more international attention. The goal is to reach people in various music scenes and ‘give them the opportunity to listen to what’s going on in Thailand or Indonesia or Japan and be more curious’. ‘Hopefully, they realise it’s unbalanced in the music industry, how everything is in English,’ he says.

As for the business platform, Kurosawa says he was very much inspired by Flightless Records, which is owned and operated by Eric Moore, the drummer of King Gizzard and the Lizard Wizard. Kikagaku Moyo met the King Gizz guys at a festival in Italy a few years ago and visited the Flightless office in Carlton in 2017 when they came to Australia for Gizzfest. ‘Everything is still DIY,’ he says. ‘All the friends are helping each other and it became kind of a community.’ Guruguru Brain aims to mirror that, except specifically for Asian psych bands.

Kurosawa must have finished his dinner a while before our interview ends. He’s telling me about the difficulty of writing and recording music when half the band lives in a different continent. Since Kikagaku Moyo will be touring relentlessly again, the plan is to try to write the next album on the road.

‘We’ve never done this; we’re always kind of like crazy on tours, and always drinking,’ he says. ‘But we want to write more songs on tour. We have five or six months of touring already booked so that’s very exciting and kind of a challenge for us: Can we actually write music while we’re doing this?’