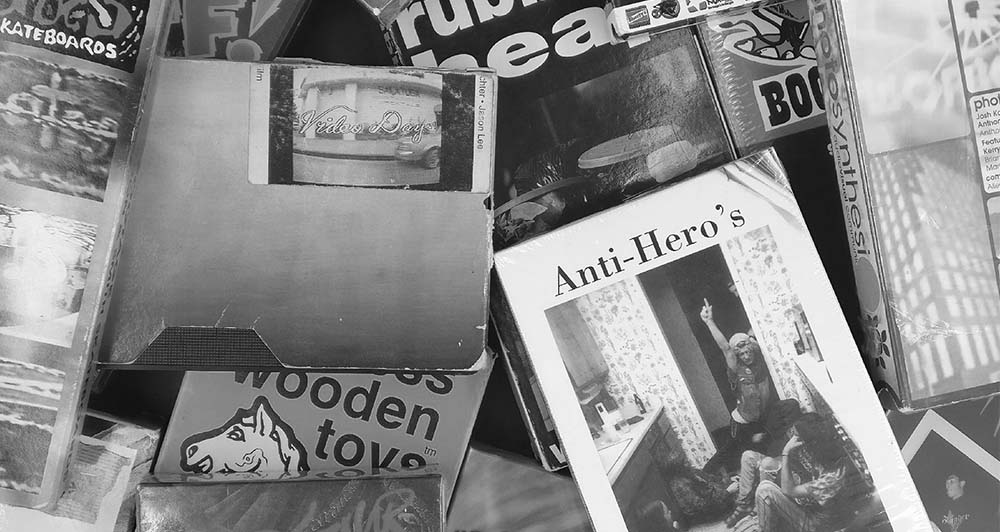 Brendan Spohn has more skate videos than anyone on the planet.

Probably. I’m talking VHS cassette tapes. But my desire to dig into numerical facts or to quantify what “the most” actually means went out the window as soon as I started talking to him.

Settling down on my couch, more in the fashion of having a toke than conducting an interview, I immediately lost interest in asking questions that led to any actual story and got lost in his world of analogue philosophy. I wish I had spent a day with him and could see that world more clearly through his eyes, but he had to hightail it back home to Bethlehem, PA from the Agenda Tradeshow in Long Beach, where I met him.

Brendan’s booth was a bright spot in the shopping mall of 10-year old Consolidated graphics, weed-print apparel and big shoe companies. He runs an Instagram account called The Secret Tape which showcases videos from the past and also serves as their marketplace. Dude has everything, seriously. I’m talking multiple copies.

His booth was done up as if the set of Wayne’s World was a video rental store: A small space the size of a darkroom with a TV-plus-VCR combo on a crate. The range of classic video titles invited industry veterans and pros alike to geek out on their favourites. The effect was valuable to the tradeshow; Brendan’s booth helped to ground Agenda in skateboarding’s past simply for its joy rather than mining the laurels of its own lore to sell future product. Someone at Agenda was paying attention.

However, they couldn’t pay for his transportation with all those tapes and Brendan needed to be convinced. That convincing came when he got laid off from his job two weeks before the show and figured fuck it—he’d never been to California or on a road trip and somehow roped his girlfriend into cramming his tapes into their car and hitting the road. By the way, his job was controlling a local news station—ingesting all the shows into the system and setting up the broadcast playlist, arranging and organizing the entire station’s programming. Seriously, this dude is straight out of the AV closet. 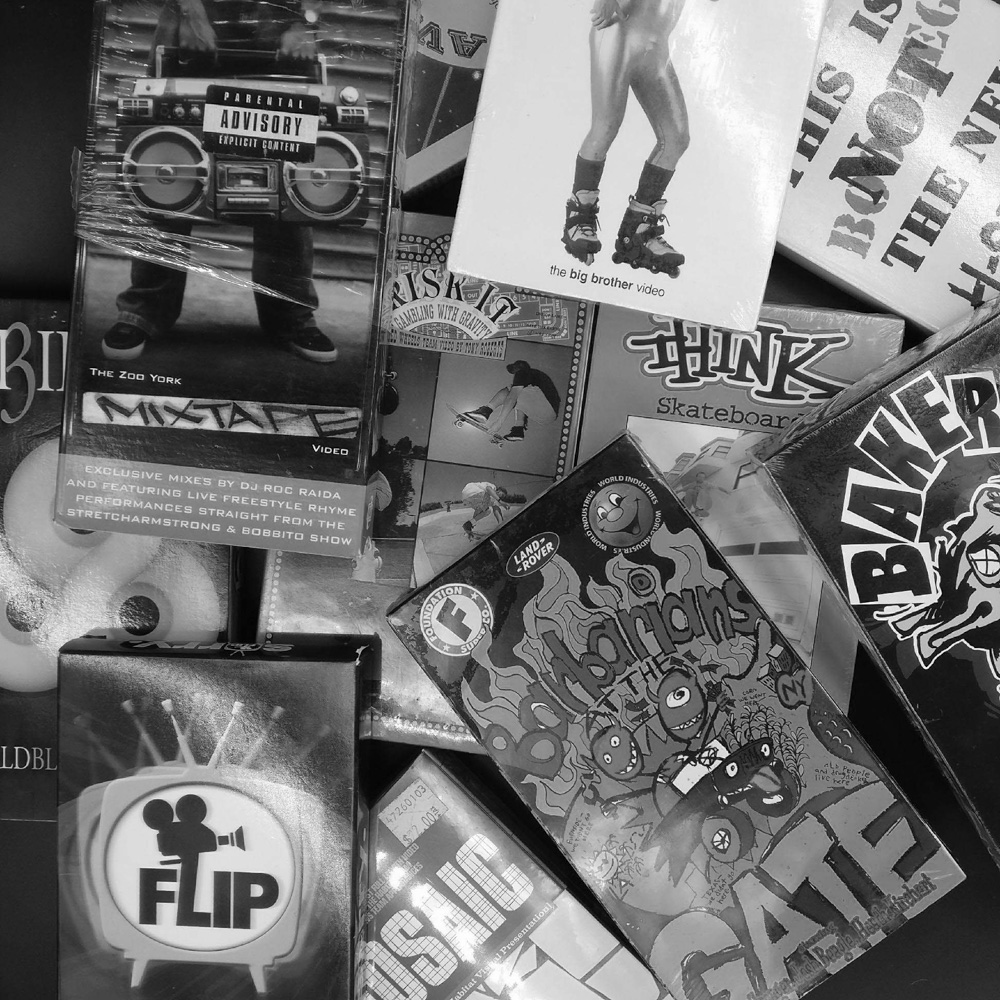 Do you have your own methods of finding videos that you’d rather not divulge?

I lurk the whole internet. Like straight up. Whether it’s local, Facebook classifieds, email. Obviously Craigslist. Anywhere I think there’s a skateboard video. I’m a loser, man. I spend like all day looking for this stuff. It’s what I do.

Were you an internet lurker before The Secret Tape started?

Totally. I was born with a phone jack in my vein. I’ve always been a big internet dude. It’s the greatest thing that’s happened to us. I was the kid who used to download everything off of IRC channels, I had all the rips and shit. I think the internet is why we’re here. God wanted the internet and he couldn’t do it himself.

The real answer to that is a Tony Hawk’s Pro Skater demo disc from Pizza Hut.

How did that lead to the Secret Tape?

In our area here (Bethlehem, PA) we had a cool shop (Homebase Skateshop) and we had a wack shop (Amateur Athlete). Amateur Athlete is a skateboard store. They’re not a skate shop. They had four locations at one point at the malls and shit. It was only a matter of time before they started closing. When they started closing and a friend of mine hit me up like ‘Yo, I just got a copy of Mosaic over there for five bucks!’ So I went over there and bought a ton of videos when they were going out of business. And the next thing I knew I was hooked. I decided ‘fuck it’ now I’m going to buy all the stuff I couldn’t afford as a kid. I never set out to start this. This was just a doubles pile that went crazy.

What does the Secret Tape do?

I help to reunite people with the shit they used to have. I don’t know. That’s what I hope to do.

Are you more of an archivist or more of a marketplace?

I wish there was a way I could properly archive stuff for people to see. That’s a horse everyone’s chasing. And you can put this in writing—I don’t care if people buy anything. That means dick to me. I’m happy people just want to look at this stuff. If it even just reminds people of that copy of Second Hand Smoke they had when they were kids. People probably haven’t seen that cover in a while, especially normal people who aren’t big skate nerds.

I’m here to remind people that skate videos are still just as important as anything else. Pieces of history. I think that videos died off big time in the last few years just like everyone says, but I think it’s going to start to hit a point where they come back. Even if they come out and the first kid who buys it rips it to YouTube. Things have to completely die for them to come back. I think the skate video had to go away for a little bit but I have a feeling, over the next couple of years, there’s going to be more full-lengths. 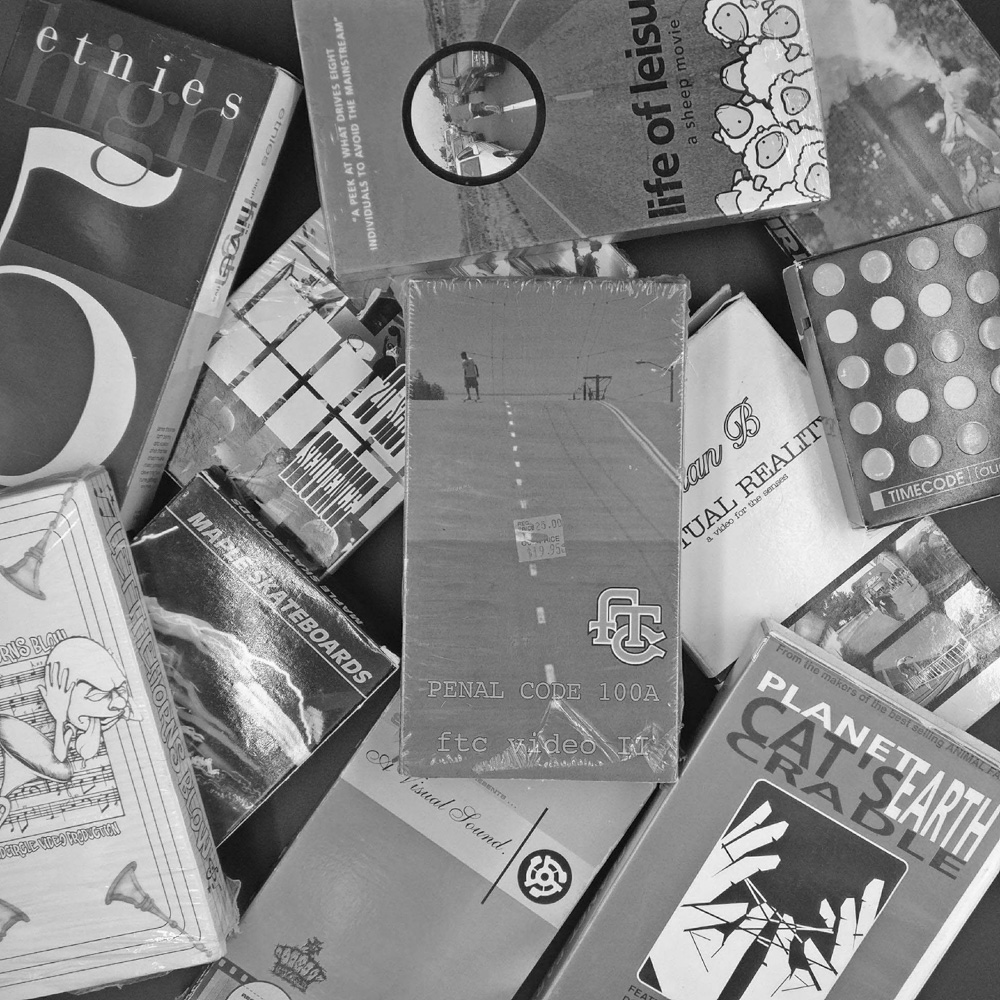 What are some of your White Whale videos?

I would say…well, I have most of the stuff I really want. But there is one. I’m actually hunting for a Photosynthesis premiere copy, more than anything. I’m actually kind of bummed that it got brought up in that Kalis Bobshirt. Because people didn’t know about that. I’ve known about it for years. I’ve come in contact with people that have them and they’re not giving them up and rightfully so, they shouldn’t.

The House video—that video’s probably the best thing ever. It was an extra on the Our Life DVD I think. Those dudes are straight scary to me, but it’s awesome. I’d be scared to hang out with those dudes, like they’d throw a couch on me or something. It reminds me of Ian Reid’s video Sex, Hood, and Videotape. Actually, in a different way, that’s one of the best videos ever made.

Where do you think full-length videos fit into the skateboarding culture? Why are they important?

I’m a really big believer in themes. If you’re going to make something, have a consistent look and theme. You know, in this day and age of video parts I think it’s pretty hard to capture a singular theme in something. I like seeing a full length that has a certain art direction about it. Take Baker videos for example. Baker videos are more famous for the shit in between the parts than the parts. I think that gets lost in single parts. The single biggest casualty of single parts is there’s no extra bullshit. There’s way more to people than just their skating. I couldn’t really give a fuck who does what tricks. I’d rather see them acting goofy on the streets with their friends. I relate more to that than anything. All that goofy footage of Antwuan Dixon after his part in Baker Has a Deathwish. That’s almost the best part. I think that’s the most important part of a full-length.

Final thoughts on why you do this?

I think all sides of this thing are fucking interesting. I don’t know, it’s corny but with skateboarding—if you pay attention to it it’ll teach you about other stuff. I learned things about the world through skating that school could never teach me. I know that’s a really cliché thing to say, but you can get a lot from skateboarding. People either pile out or they become creative people. It can go one way or another. Skateboarders are very creative people, though.