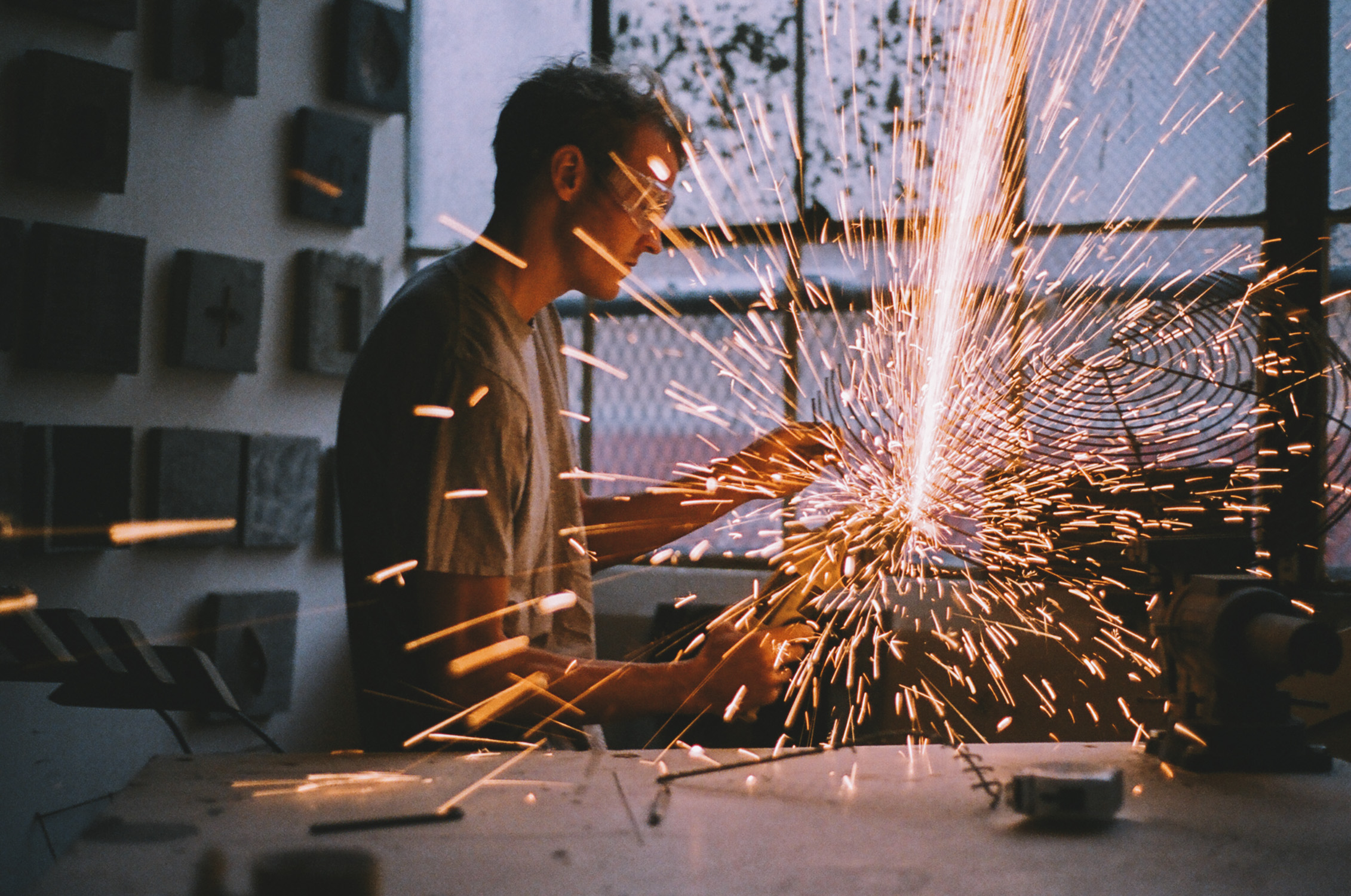 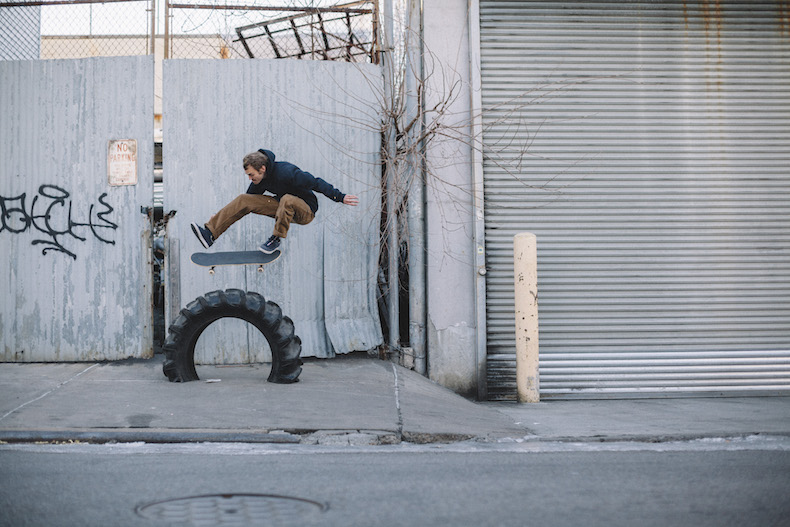 I would be doing us all a disservice if I sat here and tried to illustrate Max Palmer’s genius.

I could give you a spiel about the skaterly gaze, the blank canvas of a bench, the hidden potential of a crack in a sidewalk. I could tell you about the wild parking blocks and tiny Jersey barriers that magically appear at Blue Park from time to time. I could tell you all about the wheel bite and the Kiltys, the lack of Instagram and even the fucking flip phone. He’s having his first solo exhibition this Friday in New York City, put on by Carhartt Work in Progress. So I went over to his studio to visit, talk and try to get somewhere close to articulating his talents and the ideas that motivate them. 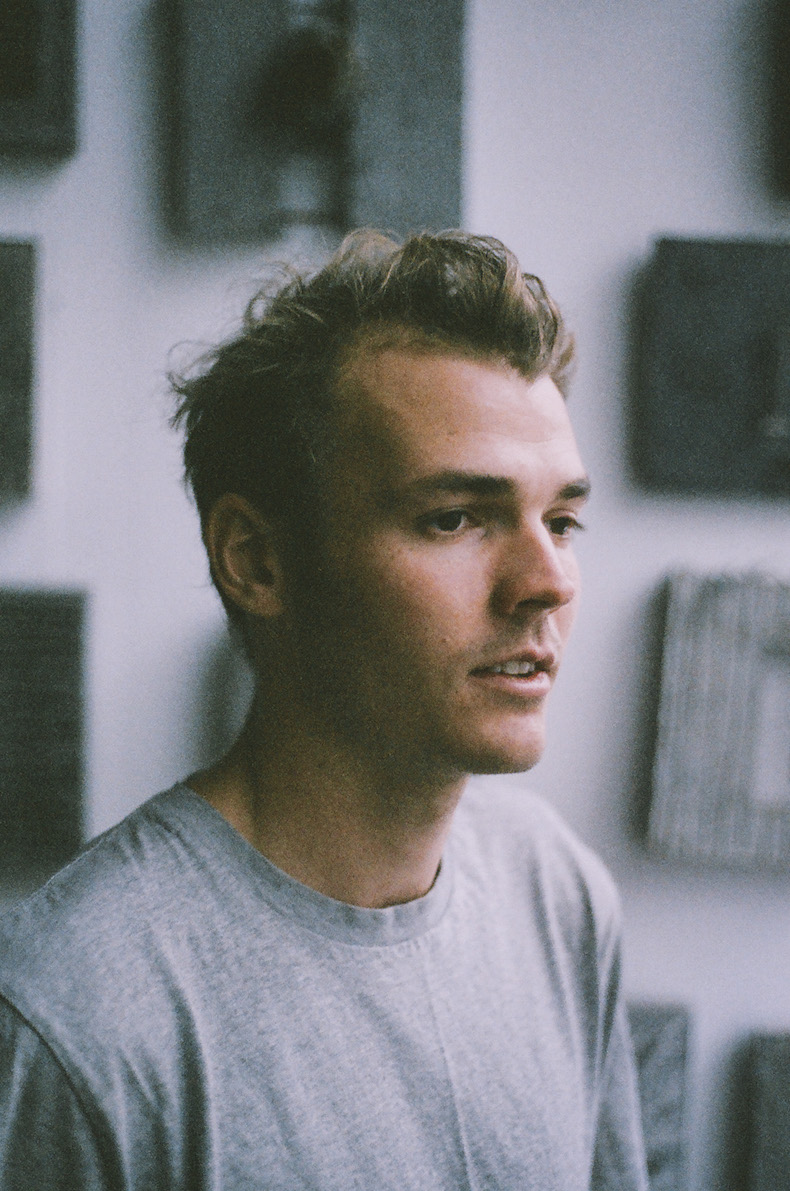 “Loose Trucks” Max Palmer, the nickname he’s been assigned for as long as I’ve known or known of him, is in many ways an understatement. It sounds like some sort of novelty, until you actually see him skate. While his setup is absolutely way too loose, there is a brilliance in the way he approaches skating. There’s an originality in his approach that actually demands such a setup; while harder to use, it does much less to hinder potential than it does to enable it. Max has made a career out of conceiving things that inherently require much more effort than the average human is willing to invest; in fact, that most people would think downright undoable. As a sculptor, it is from that same place of stubborn curiosity that much of his work stems.

“I wonder,” he says as he picks idly at a latex mold in his studio, the tarpaulined-off back section of a larger shared space, “if some things would even work, if they’re even possible.” The walls are covered with works in progress, some resembling medieval torture devices, some just actual bins of other people’s trash. Big crates full of varying types of industrial waste reach ceiling-high, while molds and casts are arranged tightly onto neighboring shelves. “I’ll try it, and it either works, or I run into problems and it starts to go into a different direction and becomes something else.”

Palmer’s art is an amalgamation of concrete mold work and a variety of salvaged materials including scraps of metal, found two-by-fours, railroad ties, and the crushed and rusted-out remnants of discarded household appliances. “I don’t like wastefulness at all,” he says, “that’s part of the reason why I like picking up the metal trash off the street, in order to reuse something, repurpose it as opposed to leaving it on the ground as pollution. I try to buy as little material as possible. I try to reuse [the things I do buy] as many times as possible. I feel pretty bad about producing waste. There’s so much trash produced here, it’s crazy.” 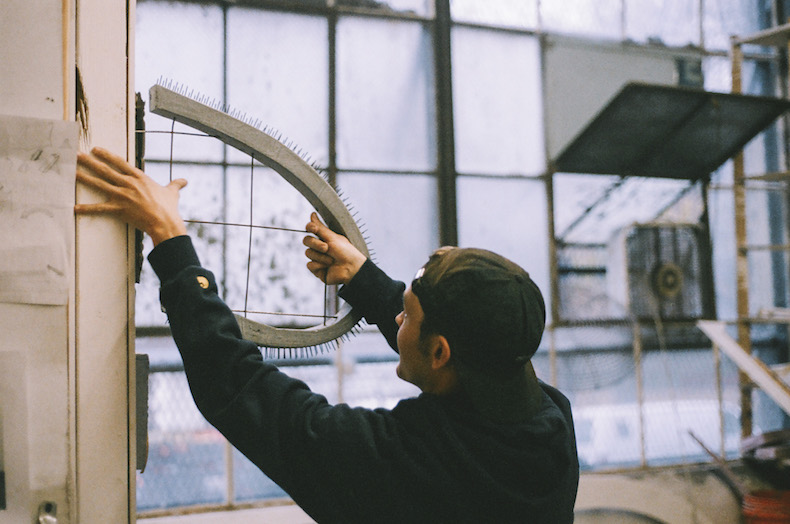 Having attended the Pratt Institute, Palmer’s initial medium of choice was photography. It was a combination of art assisting, mixed with undertaking to build the hardest bowl imaginable, dubbed the Sideyard, that led him to experiment with other art forms.

“I was working for a woman named Sarah Van der Beek as her artist’s assistant, making sculptures for her to photograph. I had never really sculpted before. Then I started building the Sideyard.  The Sideyard was basically an abandoned lot right next to our apartment. It was in Fort Greene technically but right next to the BQE, close to the Navy Yard. People just dumped trash in there. You would wake up in the morning and there would be just a bunch of trash. So we basically piled up all the trash and built on top of it. It was like a landfill. That was the first time I did anything with concrete, I had no idea what I was doing. I started to learn how it worked by doing more and more. It was insanely hard to skate but that’s what made it fun. Once I finished the Sideyard, I didn’t have anything else to work on. I started having ideas of stuff to do with mold-making because I was doing so much of that at work, so I started building little concrete sculptures. I was making pool coping for the Sideyard out of cardboard tubes and PVC pipes. That’s pretty much how I got into it.” 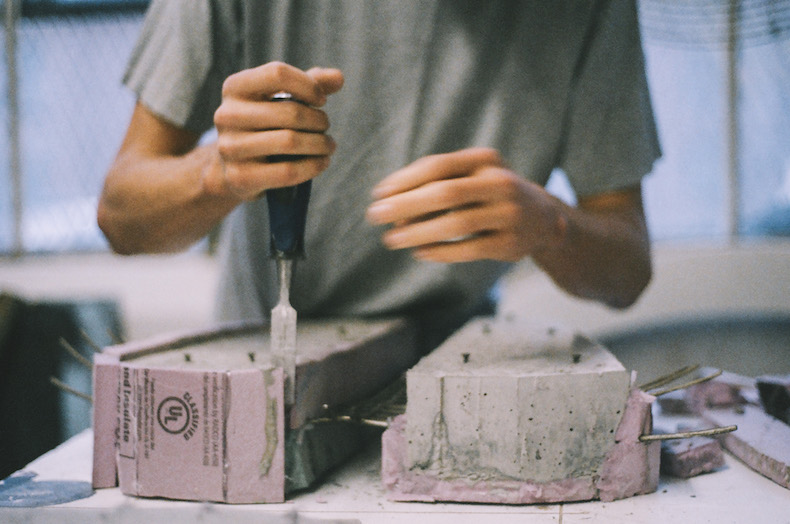 While the Sideyard maybe lasted two years at most, Palmer continued his work with concrete, building obstacles that would anonymously appear in ball courts around Brooklyn and Manhattan, like makeshift pole jams, small-scale Jersey barriers, and oddly-shaped slappy curbs. They’d sit there until they broke or were tossed by the Parks Department. This type of work seems to almost enforce progress–the soundness of the design is tested as brutally as possible, making any flaw pretty apparent, and he’d often go back again and try to get it right. Or conversely, the flaw will just shape the initial idea into a whole new one.

Inspiration is drawn from looking down, and like some sort of post-industrial Gaudi, Max draws from the shapes and forms that he finds in nature, or in the gutters of the man-made city that succeeded it.  “All the metal pieces and stuff are just industrial waste that I found on the ground and I, for some reason, decided to pick it up and give it a second life; another purpose than just a piece of trash or debris on the street that eventually is going to find its way into the ocean or something.” 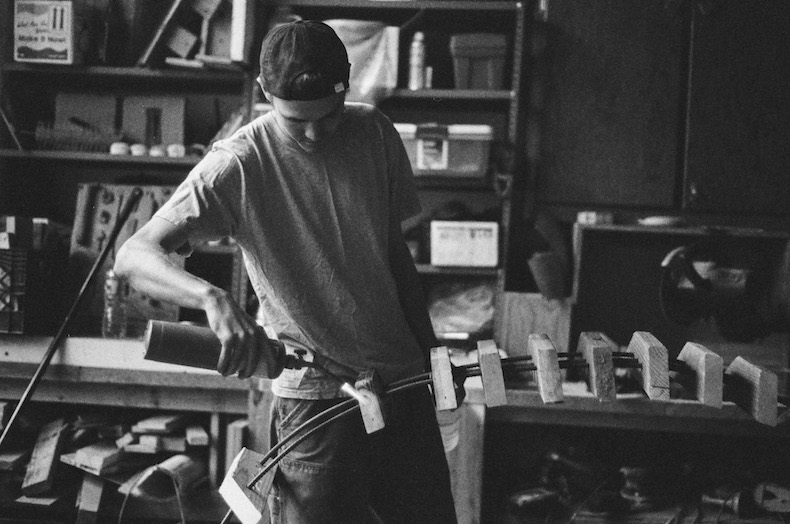 A commonality throughout much of his work is the shape of the human spine. “I’m very attracted to it. I just started recognizing this shape in everything around us pretty much… in the human body, in nature, and in man-made structures. Then once I started seeing it everywhere I kind of just started collecting all of it.”

In some cases, the shape will be plucked right off of the street, unmanipulated, and in others, he’ll cut up a smashed table fan, or cast a series of nails into a base of concrete. Perhaps the largest piece, spine-like and taller than human, is two machine-bent pieces of rebar held together with a series of brick-sized wooden blocks, through which each piece of metal is threaded. It was an attempt at replicating a small piece he found on the street whose original purpose neither of us could even begin to decipher. “I can’t tell if it’s part of a computer… it looks like an electrical thing, but also it doesn’t.  It’s probably some type of packing material or something but… it just doesn’t make sense.” 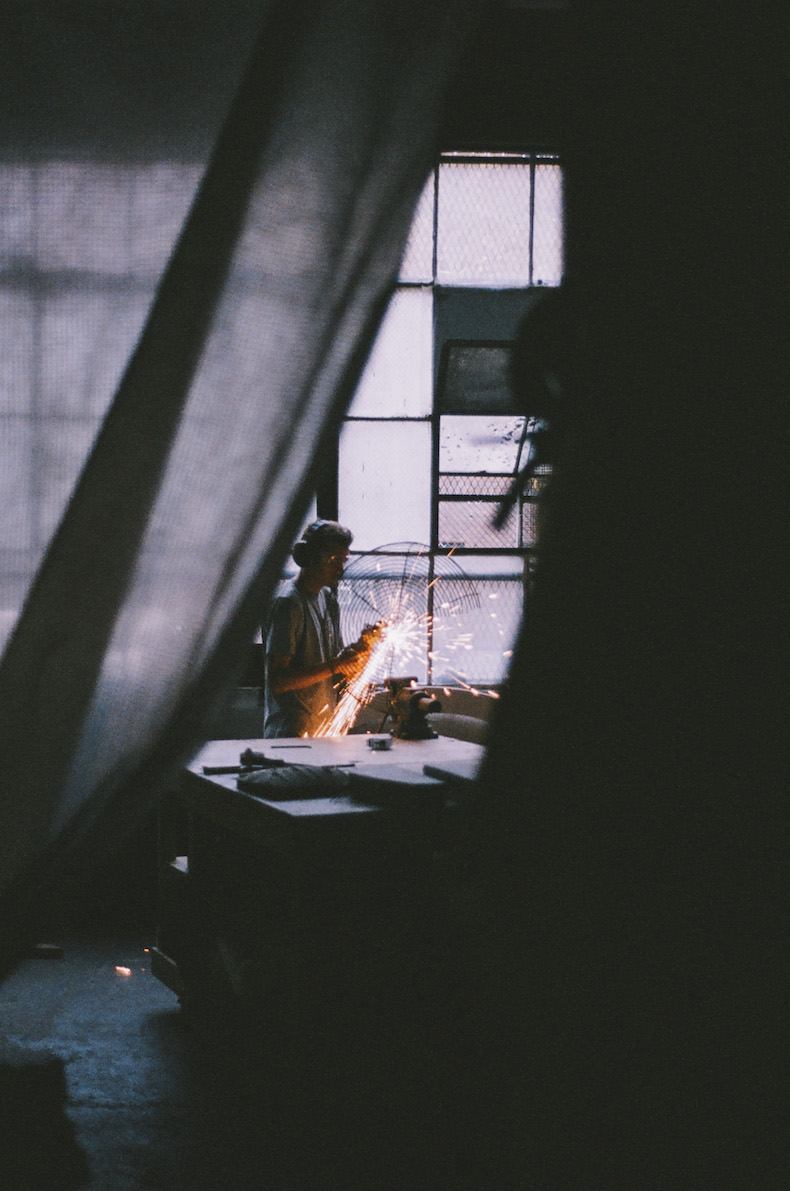 There’s a thoughtful consideration to the refuse that Palmer collects.  He thinks hard about his found materials, other people’s waste, what it was for, and then about what it could be for. “All these pieces were once an important structural piece to something, then eventually they just became industrial waste. At one point, they were fabricated for a specific reason—to be part of a machine or a car or a structural part of a building. That’s kind of what I like about them. That they once had a purpose structurally.” 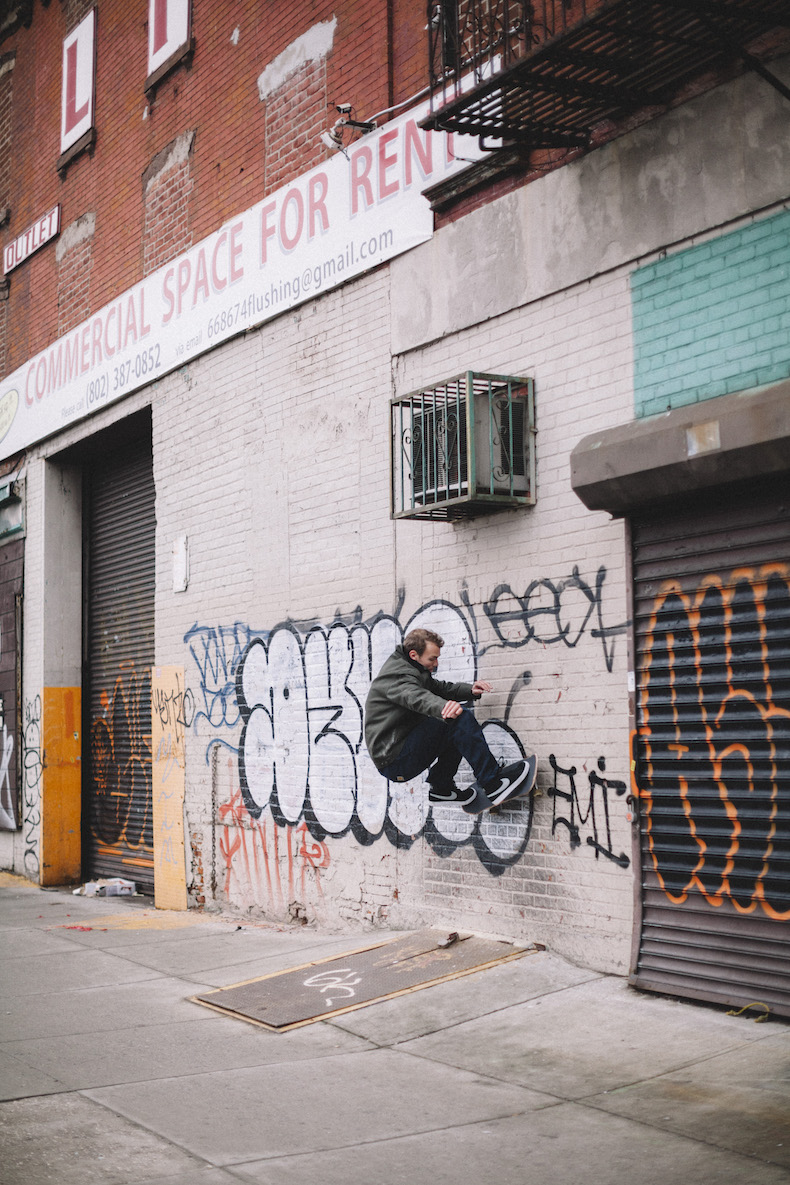 This urge to recycle, reuse and recreate the things that society has thrown to the curb are quintessential to the act of skateboarding—for what is modern-day street skating if but a revival of useless junk? Taking discarded spaces and materials that no one else seemed to be doing anything with and making something new. His work, his habits and ideas, articulated in action, not words, are what make him an embodiment of skateboarding and its ability to undermine the frivolity that flows inherently from the gutters of our global capitalistic society. His art is an extension of that subversive curiosity. But what truly defines Max Palmer’s genius is its effortlessness: he couldn’t be happier than to wade out into that gutter and bring you back something incredible, something that you wouldn’t have even thought possible.

His show, Improper Slope, opened this Thursday at 43 Renwick Street in New York and shows until Tuesday, May 9th. 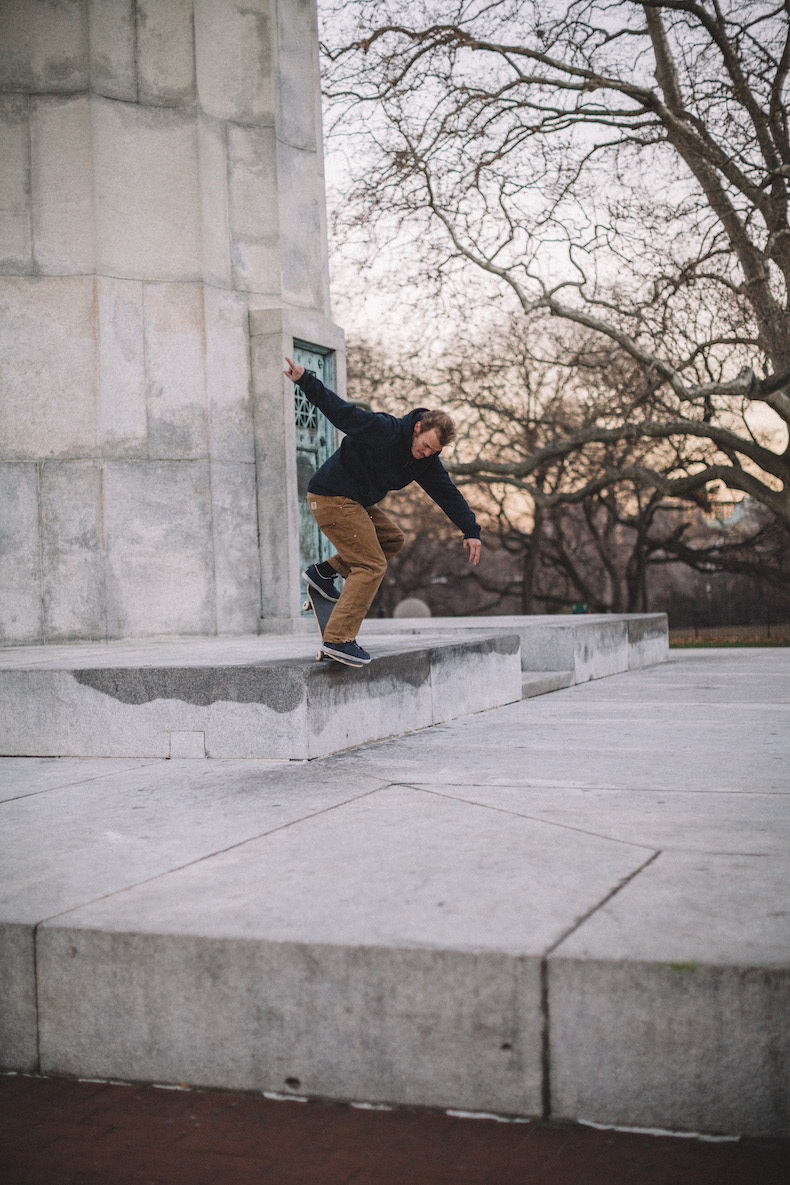