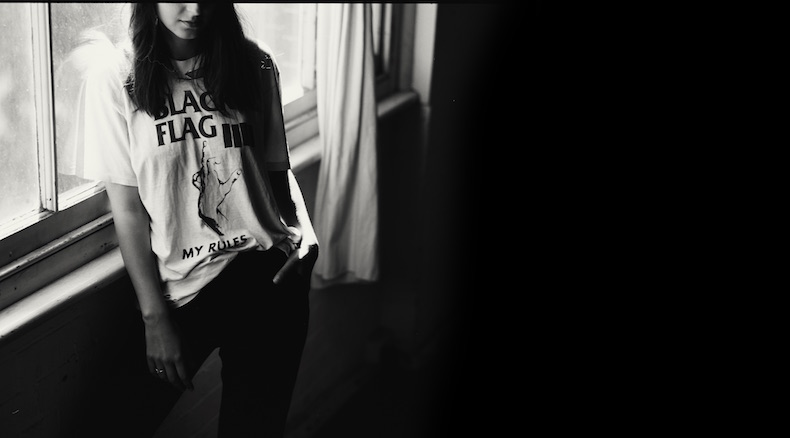 Half a roll of film, a diary full of words, and seemingly indecipherable numbers.

That’s all Stanislava Pinchuk will leave a nuclear exclusion zone with, but she admits she’ll dream about it every night for weeks. “After I leave I feel like I’m always a bit out of my mind, you know? I still don’t have a hard shell—that I see a lot of people do have—but maybe that’s my job. Maybe it’s good not to harden up.”

The “job” she’s talking about is as a widely exhibited artist, mapping areas of conflict around the world in the most delicate of ways; through tiny, intertwining galaxies of dots. She’s mapped nuclear zones and topographies of changing borders in war, all within locations that have personal significance to her. 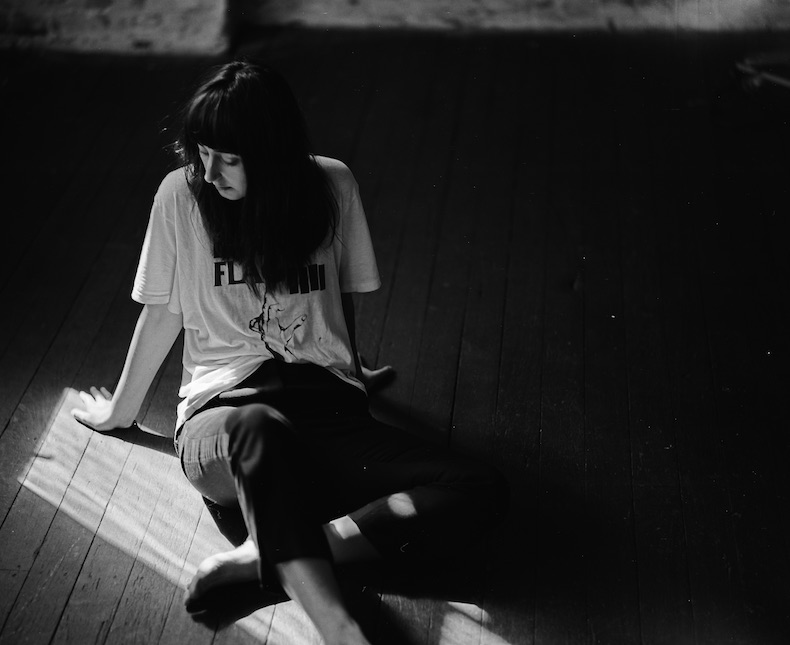 But an introduction to the artist (known also as Miso) wouldn’t be complete without mentioning a different kind of art that she’s become known for, one that takes place at the end of a long day in her Melbourne studio, and best done with a bottle of whiskey present.

Miso the tattoo artist is her after-hours hobby; referring to it as such not only for the enjoyment factor, but also because she refuses to take money for it. But you can’t just book yourself in for an appointment; her delicate tattoos are only found mapped onto the skin of friends, and only in exchange for a trade of the person’s choosing.

And though her tattoos are as delicate as her larger scale artworks, they’re both a physical and mental reprieve from the long-term process of creating a single series of works. “It’s creative and energising and you do something super permanent in about 15 minutes. That’s just the nicest balance between making this really archival, laborious work that no one is going to see for a year.”

Such as the year spent on her most recent work, Sarcophagus, which resulted from her time spent inside the Chernobyl Nuclear Exclusion Zone, recording the radioactive topography of the area surrounding Reactor 4, the site of the catastrophic meltdown. A large sarcophagus was built around the remains to act as a radiation shield, but by that time the contamination had killed 31 firemen and plant employees, and would go on to have long lasting health effects for generations to come. It’s a haunting place to visit, and even more so for Miso, who has close ties to the land that stretches beyond the contaminated 30km radius.

Born in Kharkov, Ukraine, shortly after the nuclear disaster of 1986, Miso spent her childhood there before moving to Australia aged ten—describing it as both a difficult and special place to grow up. “I’d never thought about it, but being born in Ukraine right after Chernobyl kind of raised this narrative of paranoia and the logistics of the whole thing. I almost surprised myself how knowledgeable I was, going to Chernobyl and mapping Reactor 4.”

Chernobyl isn’t her first face-to-face encounter with a nuclear zone however—in the strangest of coincidences, Miso has personal ties to both Chernobyl and Fukushima, the two worst nuclear power plant accidents in modern history. For her previous body of work, Fallout, she visited the site of the Fukushima Daiichi nuclear disaster, something she felt compelled to do as she’d been living and working in Tokyo for a number of years at the time.

“In a way, Fukushima was strangely almost easier,” she says. “It was a really active site, there were cleaners, bags, and machinery, still a lot of houses and sites weren’t fully cleaned up.” This, in her experience, was the polar opposite of “the complete desolation” of Chernobyl, where an eerie sense of quiet blankets the place and the only sign of activity within the zone comes from “the returned”, a small community of people who’ve come back to live within the exclusion zone.

Opening up her diary from the time spent in Chernobyl, she flicks through pages that have inky black columns of numbers scrawled onto them; data, taken from her Geiger counter. It provides her with tangible evidence of what can’t be seen with the naked eye, her tool in manifesting the invisible. “Nuclear zones are difficult because as much as they’re cleaning sites, everything is invisible. I mean the radiation, it has no smell, no sight, or feeling, it’s nothing. And I always wonder how differently I’d be reacting and negotiating those zones if I could see the levels of radioactivity beyond the relatively abstract numbers on my Geiger counter.”

When she peels the bubble wrap away from her works (all of which were snatched up within half an hour of going on sale), the painstaking process behind her art is revealed. The most miniscule marks move across the white space, tiny parts of a big and beautiful whole. The delicate, sweeping patterns do well in hiding the actual process that goes into making them—she goes to yoga every day to counteract the physical pain that the dot-by-dot hammering inflicts on her body.

I mention that her works deal with incredibly heavy subject matter, but they just look so… pretty. She laughs, saying as a “non-modernist” her desire is to put beautiful things into the world, and that’s what she likes about her work. Instead of employing commonly used war motifs, she relies on the titles of her work to reveal the darkness behind the beauty, and it’s that double bluff which draws people in. “I don’t want to show blood or weapons or tanks or nuclear storage. It’s very much about the feeling and the poetry, a wider feeling than something you’d expect to see.”

Stanislava is gently spoken, and seems to answer each question I ask with the same careful consideration that I imagine she uses when making her art. She’s precise, relaxed, and incredibly thoughtful towards everything she creates—in essence, probably the exact person you’d want holding a needle that’s about to mark you for life. Her trademark tattoos have subtly inked their way on to bodies of friends, but they’re less your “traditional” tattoo, and more like the dots in her work—carefully placed and thoughtfully done, like intimate little body adornments. 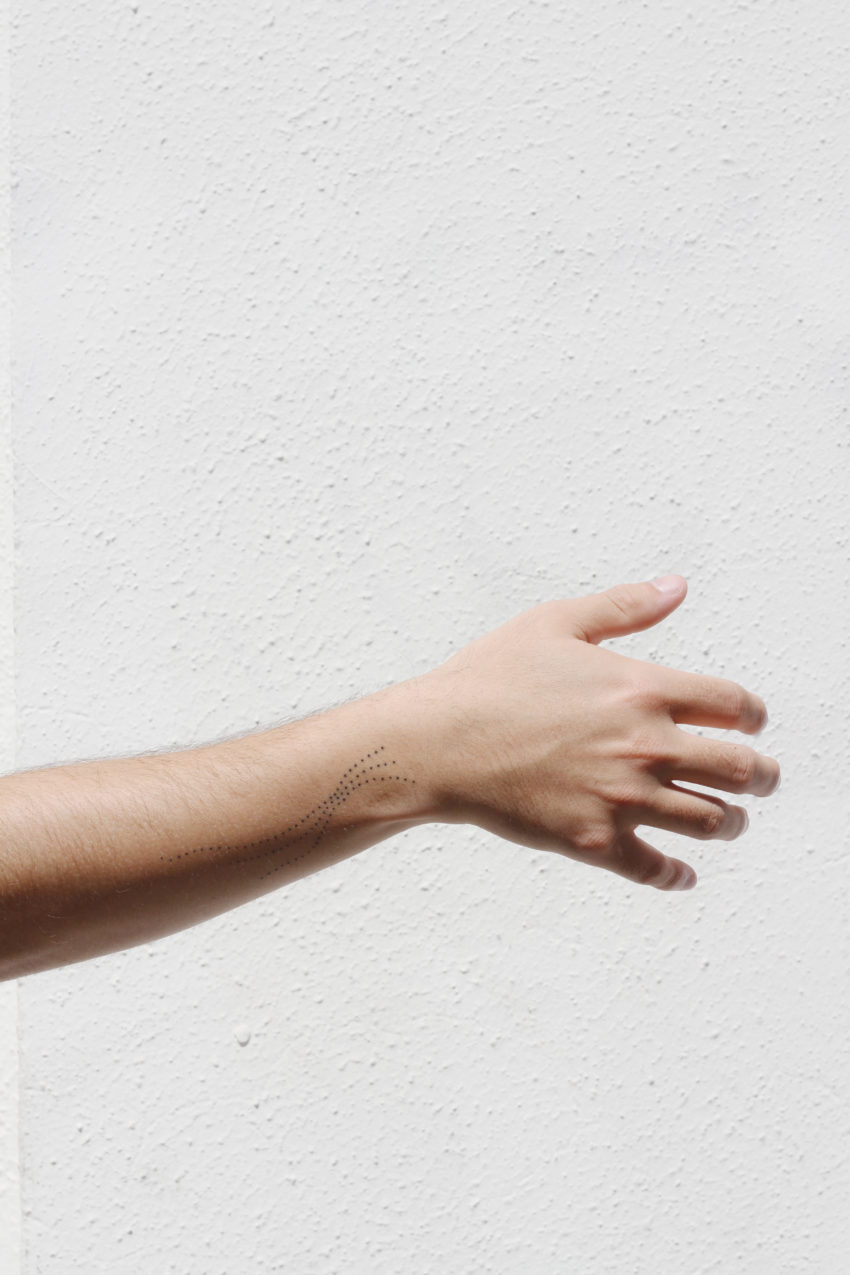 She tells me how the first time she ever tattooed anyone it was her best friend. They were 18, and she did half of a hand poked tattoo on each foot. “It’s so crazy and with so much adrenaline, you’ll never forget that. I was solidly terrified for the first three years that I tattooed.”

Miso had a big studio at the time and would let her best friend (the receiver of her first tattoo) and the rest of their “idiot punk friends” set up shop in the corner to dabble in their homemades, but she kept getting distracted from her own work by the electricity of the process. She couldn’t restrain herself from watching, ultimately ending up the one handling the needle. “I was sewing and embroidering a lot at the time, so it didn’t feel like a huge stretch to put some ink on the end of that needle,” she says. 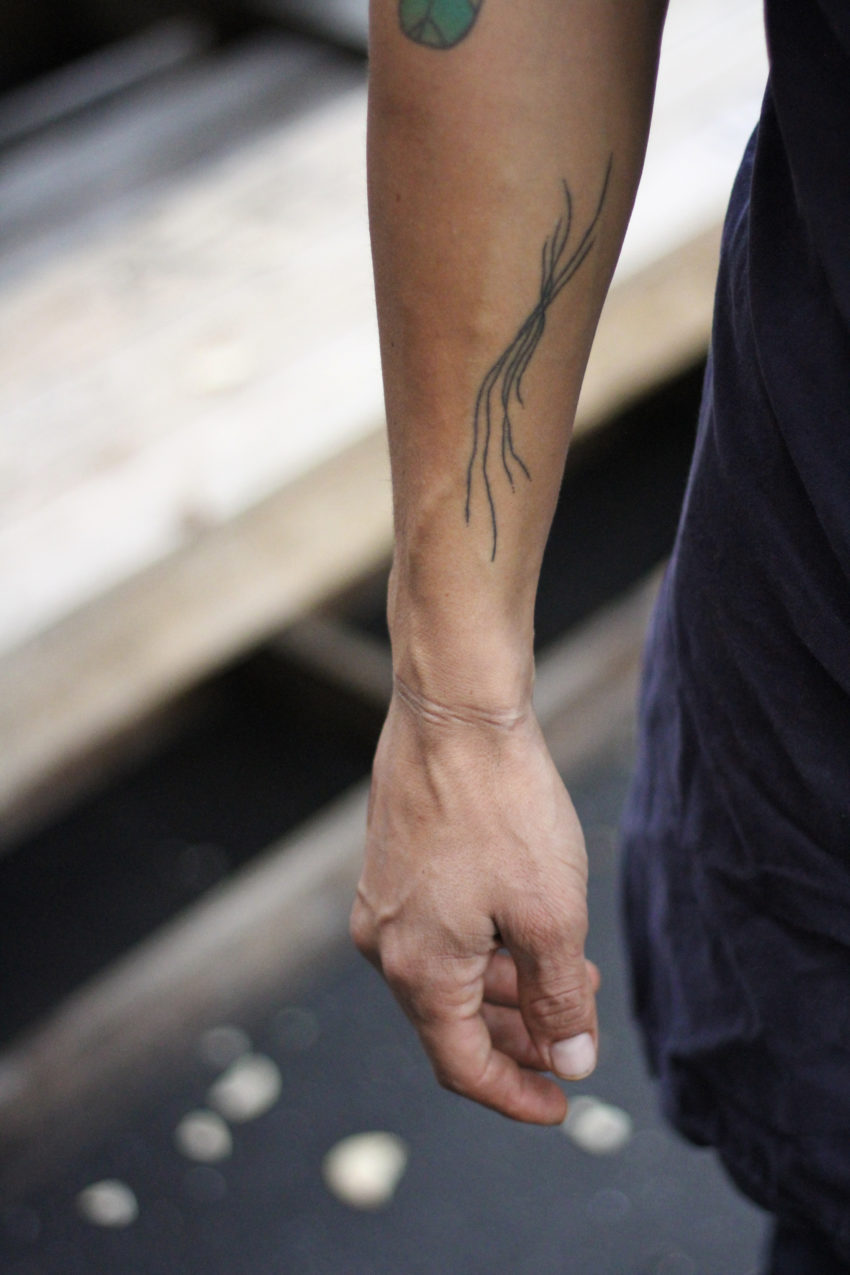 Friends started dropping by for tattoos, and Miso unintentionally became the creator of a kind of alternative trade economy. “Everything that I own is kind of from that, like artworks, shoes and jewellery, furniture and the books I’m reading, even half my fridge at the moment, it’s all from trades,” she says. I have to ask the obvious question (what’s been her favourite trade?), thinking that surely tattooing Florence Welch in exchange for a song is up there. But Miso says the ones she’s most amazed by are those she can’t access with money. 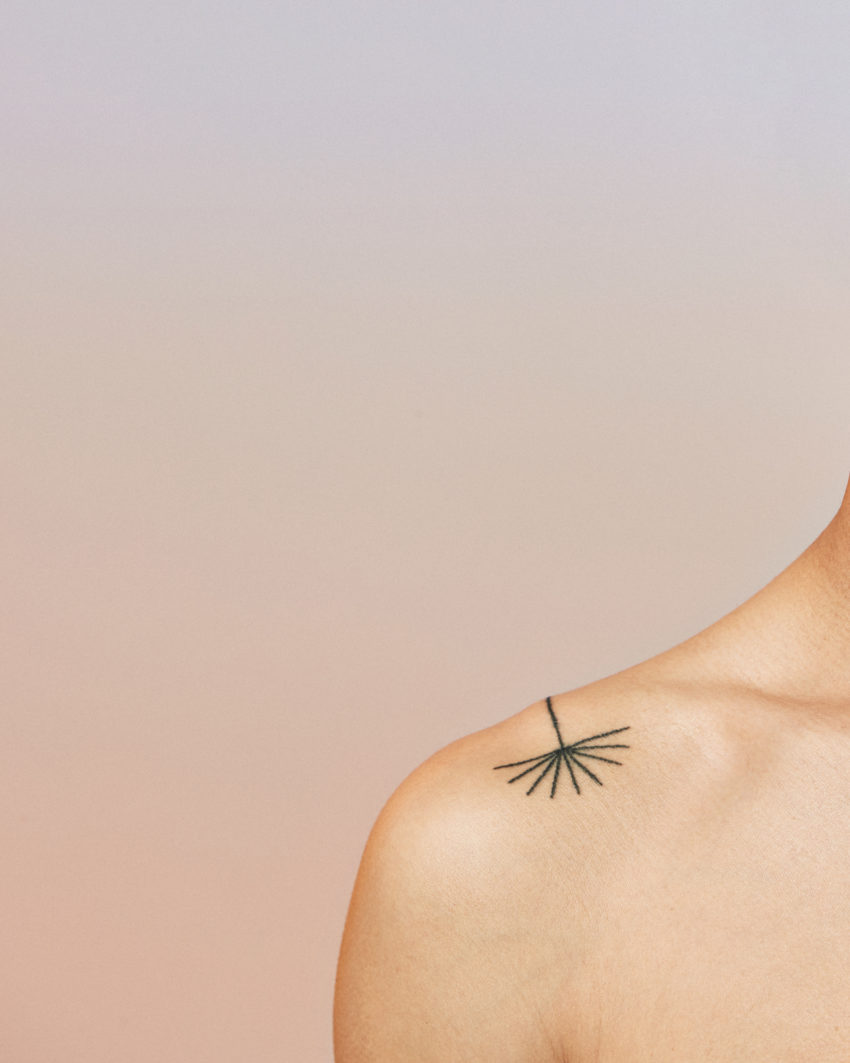 “Like my friend’s Italian Nonna making dinner for me, that’s not something you can buy… sleeping on a friend’s boat, a road trip, or a hike to get me out of the city,” she says.  “Likewise, creating a tattoo for a friend who would never have been compelled to get one from a stranger at a shop, but they got one from me and they’ll probably never get one again.” 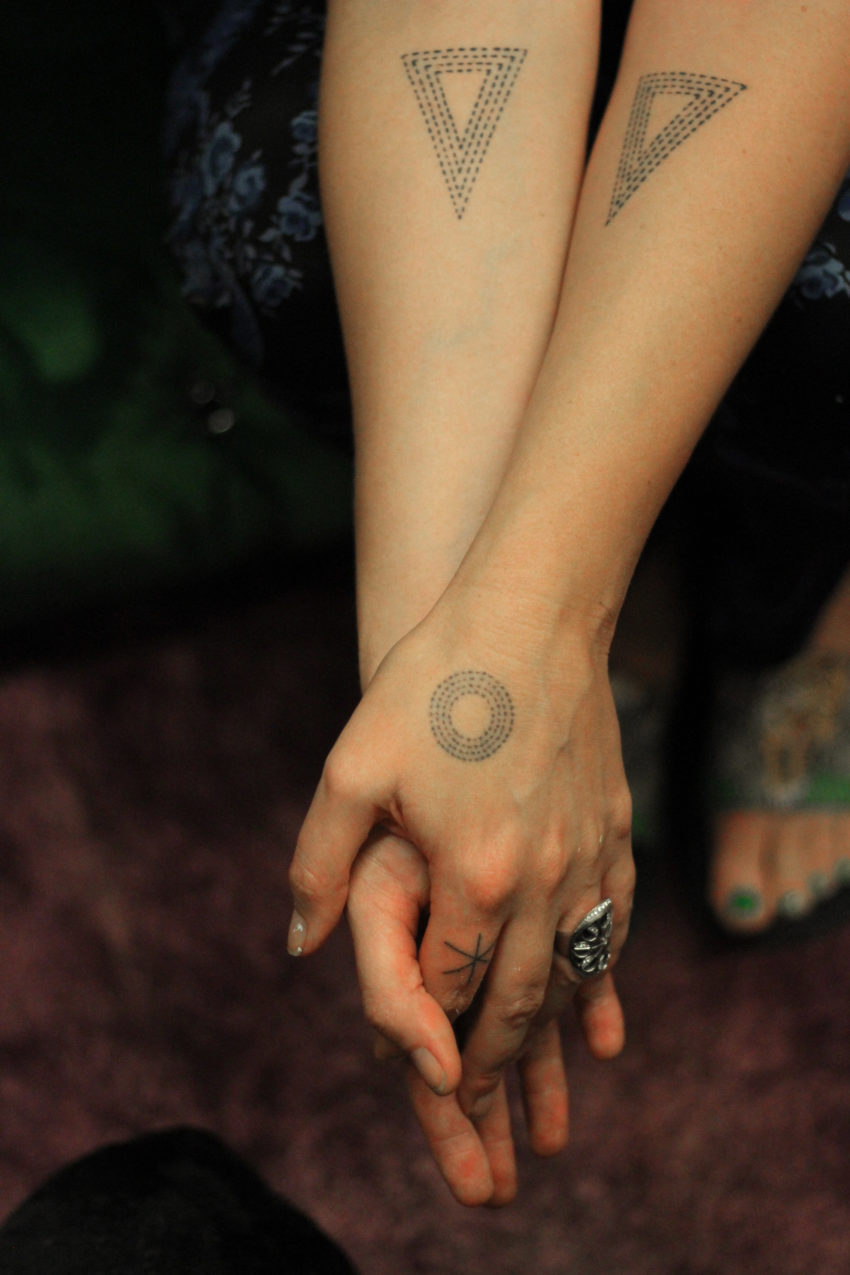 The studio where much of her tattooing takes place is in Melbourne’s iconic Nicholas building. She’d gotten a call one day about a studio that’d become available in the building, and it ended up being the perfect fit. Turned out it also belonged to Vali Myers, the Australian artist and bohemian whose gypsy lifestyle in Paris’ Left Bank and the Chelsea Hotel was well documented in the 50s.

Something that’d be an interesting fact for most, but for Miso it was a weird twist of fate. “I’m a huge Vali Myers fan, I actually have a V tattooed on my hand for Vali,” she says. “Every time I went to New York I used to pass by the Chelsea Hotel and blow her a kiss. You can still see (in the studio) these really wild magenta colours underneath where the next tenants have painted over. These little finds, these little pieces of Vali, it’s pretty magic.” 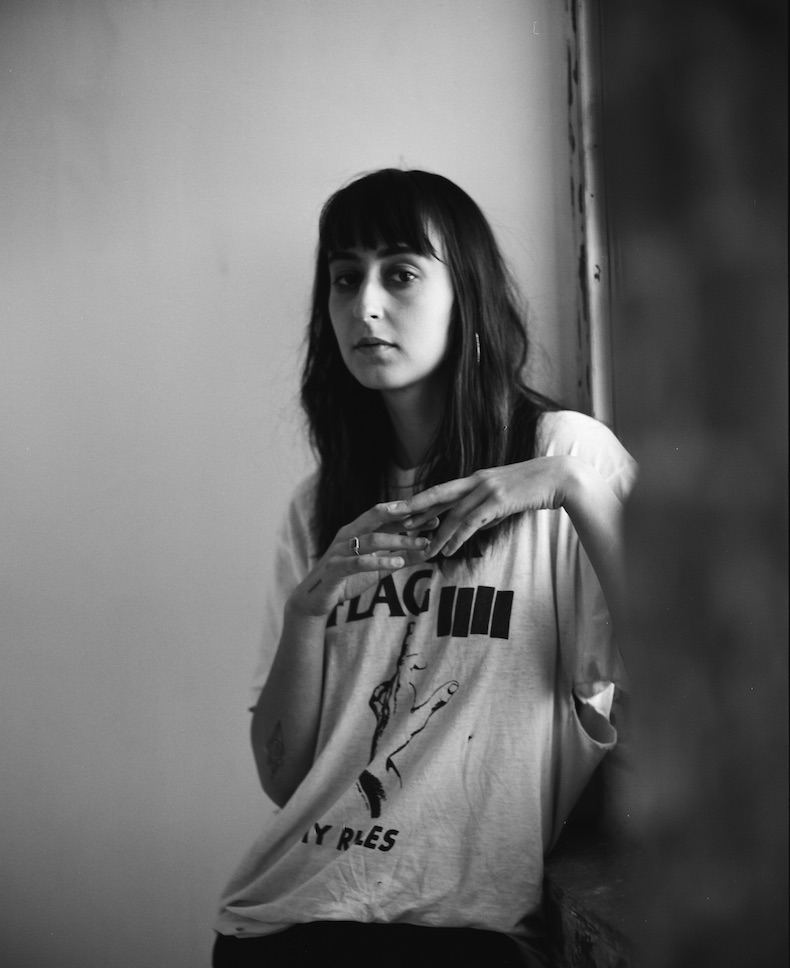 A fitting studio inheritance for Miso, an artist who also leaves little pieces of herself not on the walls of her studio, but on the skin of those close to her. But the after dark tattooing sessions are going on hiatus for a while. Miso’s off to Scotland for three months as the recipient of the Glenfiddich Artist in Residence Prize, where she’ll be posted up in a cottage within an old whisky distillery, presumably in the midst of some green, foggy marsh. There was tight competition for the spot, making the judges’ final decision a tough one. But when it came down to the crunch, she’s convinced she knows the motivations behind the judge’s final choice.

“I asked a lot of questions about whisky.” 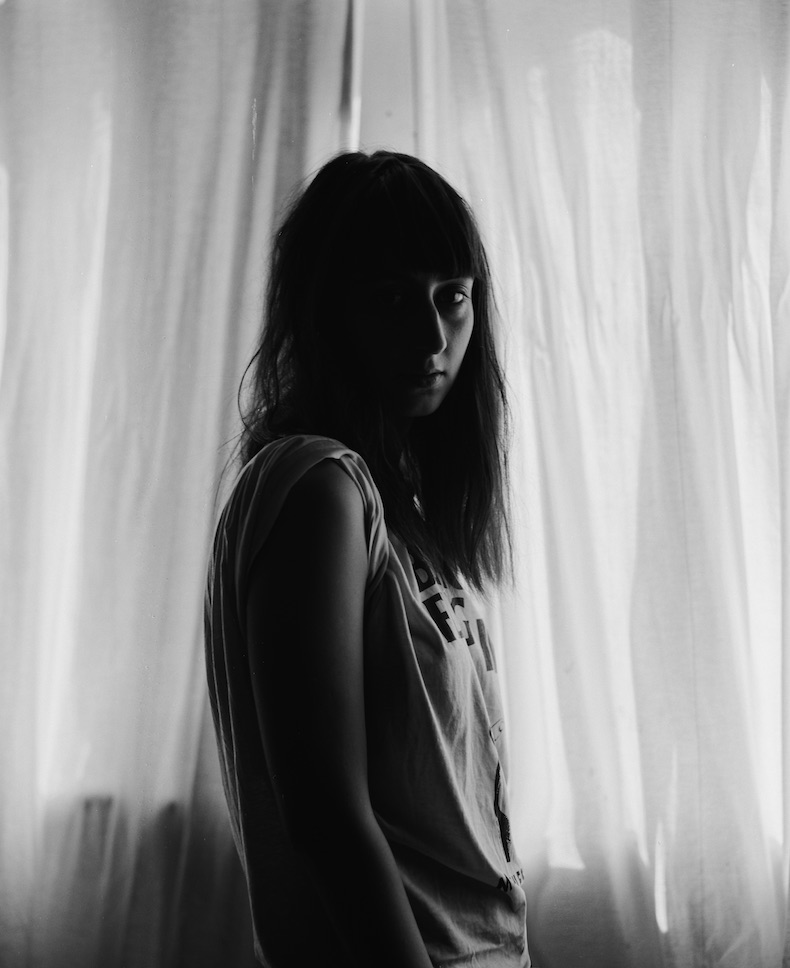