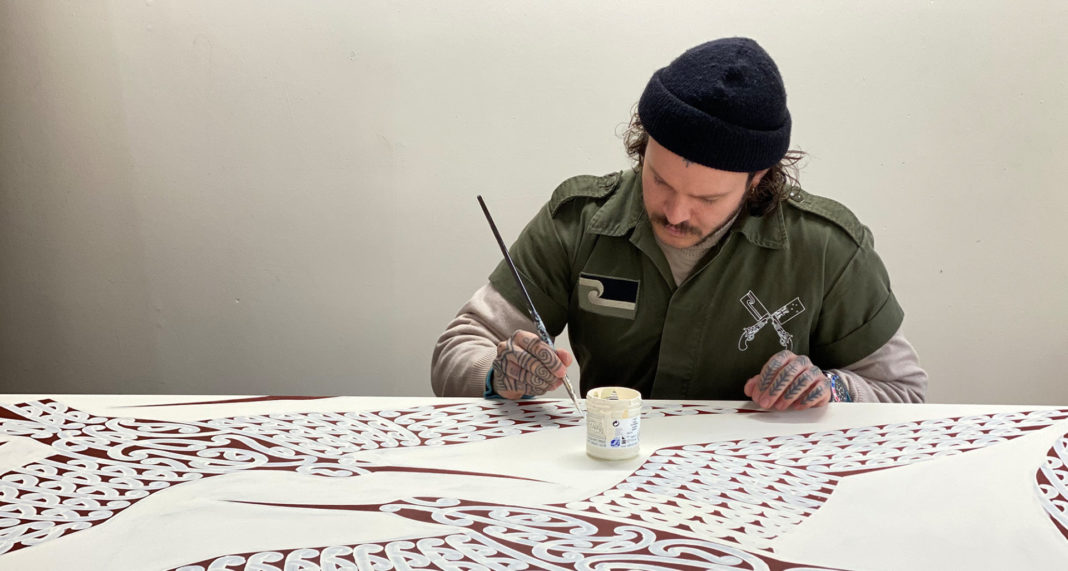 Tristan Marler, aka Manawa Tapu, is a multi-disciplinary artist who hails from the Hokianga in Te Tai Tokerau, in the far north of Aotearoa (New Zealand).

Like many Māori, Tristan grew up straddling the worlds of his whakapapa (ancestors) and pakeha (white) culture. Happily, his life has led him towards reconnecting with his Māoridom and expressing it through his work, while the rest of us get to learn and enjoy it. On the occasion of Tristan’s work being featured in a collection of clothing by Roark, this pakeha caught up with him to kōrero on his practice. 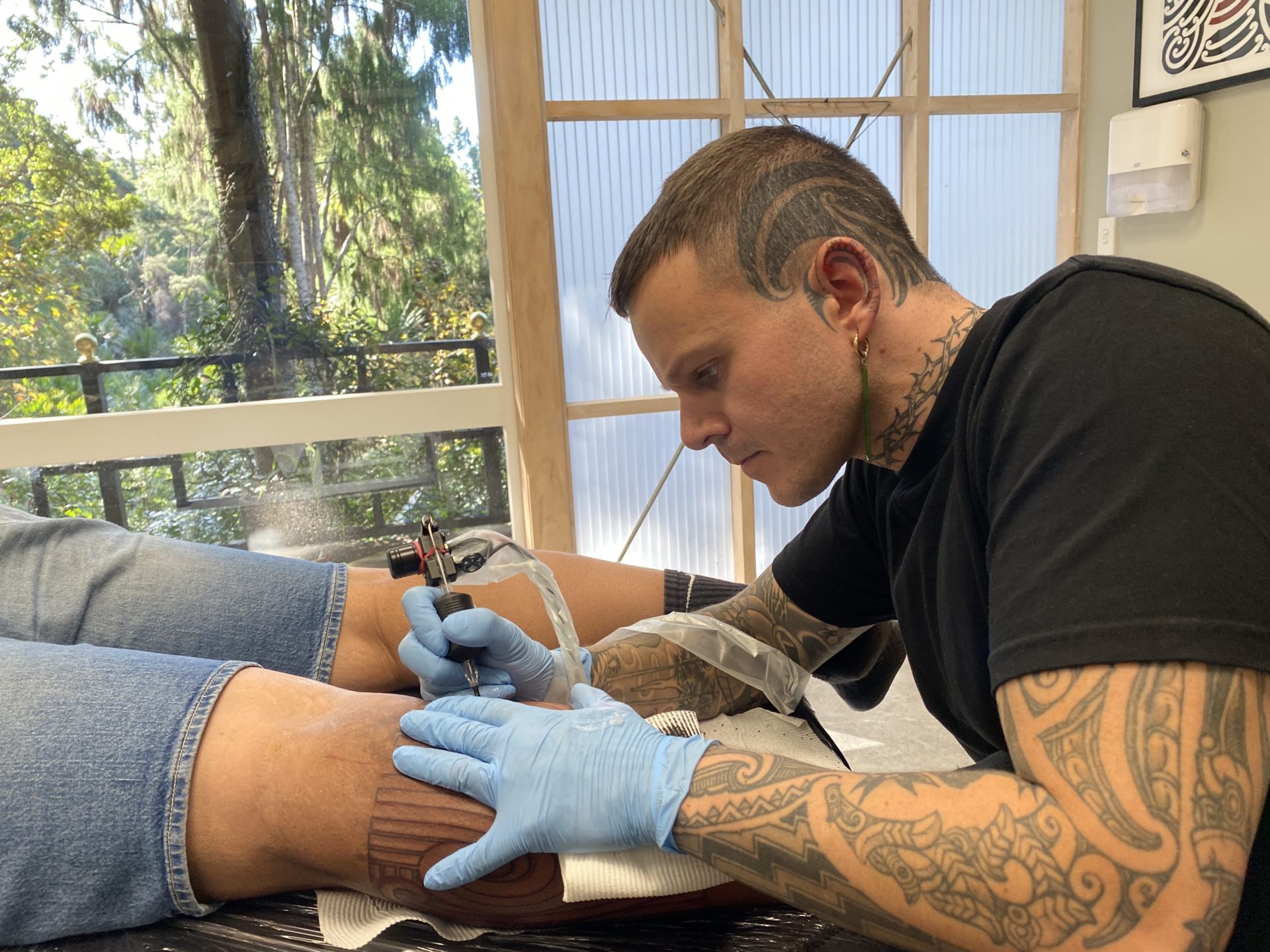 What are you doing today?
I’ve just tattooing someone’s knees this morning and this afternoon I’m doing someone’s inner arm. Typically, I’m doing moko for about two people a day.

What led you to this practice? It’s not just that you’re a tattooist. That’s a part of your life’s practice, right?
Yeah. I guess it started off growing up in Auckland. From childhood, I knew I had whakapapa [ancestry] Maori through my mum’s side and I was always fascinated about that, without really knowing that much about it or having much connection to that side of my heritage. After visiting my marae a couple of times, I started connecting with Māori culture through art and music during my high school years. And when we started Kōwhaiwhai studies and learning about traditional Māori music, that’s sort of what started me on my journey.

Being on that journey, it’s continually helping me to feel more connected with my sense of Māoridom. So that’s why I keep pursuing it deeper and deeper. I’ve started studying Te Reo Maori as well, which is also helping me on that journey. I guess my end goal is to be able to contribute back towards the collective and be able to serve my community up north in any way I can; to pass on any knowledge or skills I might have along the way. 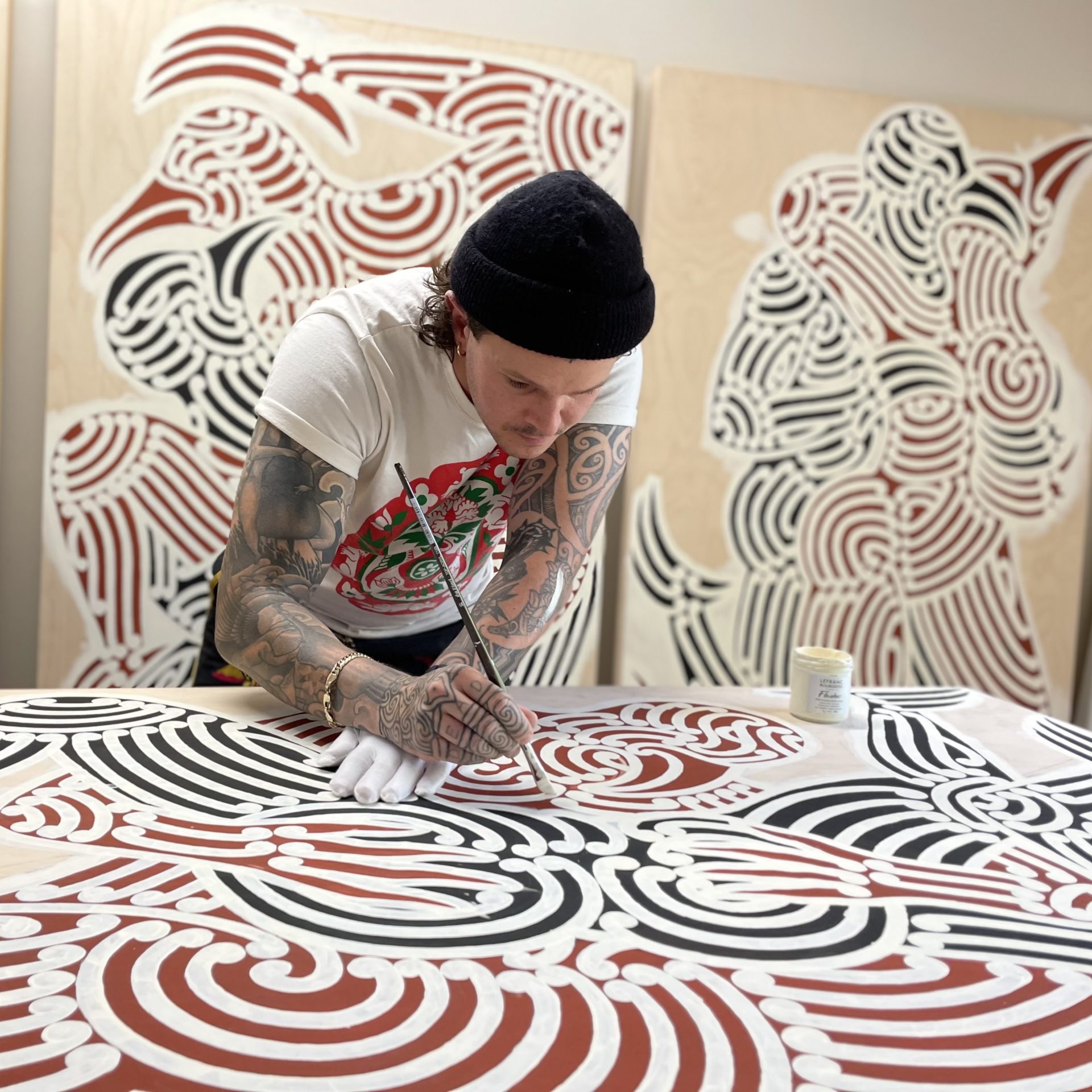 I guess part of that is communicating with the wider world as well, which is what we’re doing today.
Yeah, exactly. I’m always a little apprehensive working with non-Māori companies, especially from overseas. But what Roark are doing with their global mission seemed pretty cool. And they understood when I explained to them about being a Māori artist, not being able to actually sell them designs I don’t own.

What do you mean by that?
You know, all the patterns I work with come from the collective pool and belong to Māori culture as a whole. They were really cool with that.

These patterns tell stories, right? These are visual communication. This is what we’re talking about when we say Toi Māori.
Yeah, yeah. So there are x amount of patterns, plus you can create new patterns from the environment around you, and it’s how you use those patterns that tells the story.

The patterns you used in the collection, they all trace back a long way?
Yeah, as well as some patterns I’ve developed. And most of them come from textile patterns. Lots of them relate to the sea—pathways of the sea, fish, birds… so they also relate to navigation and travel. 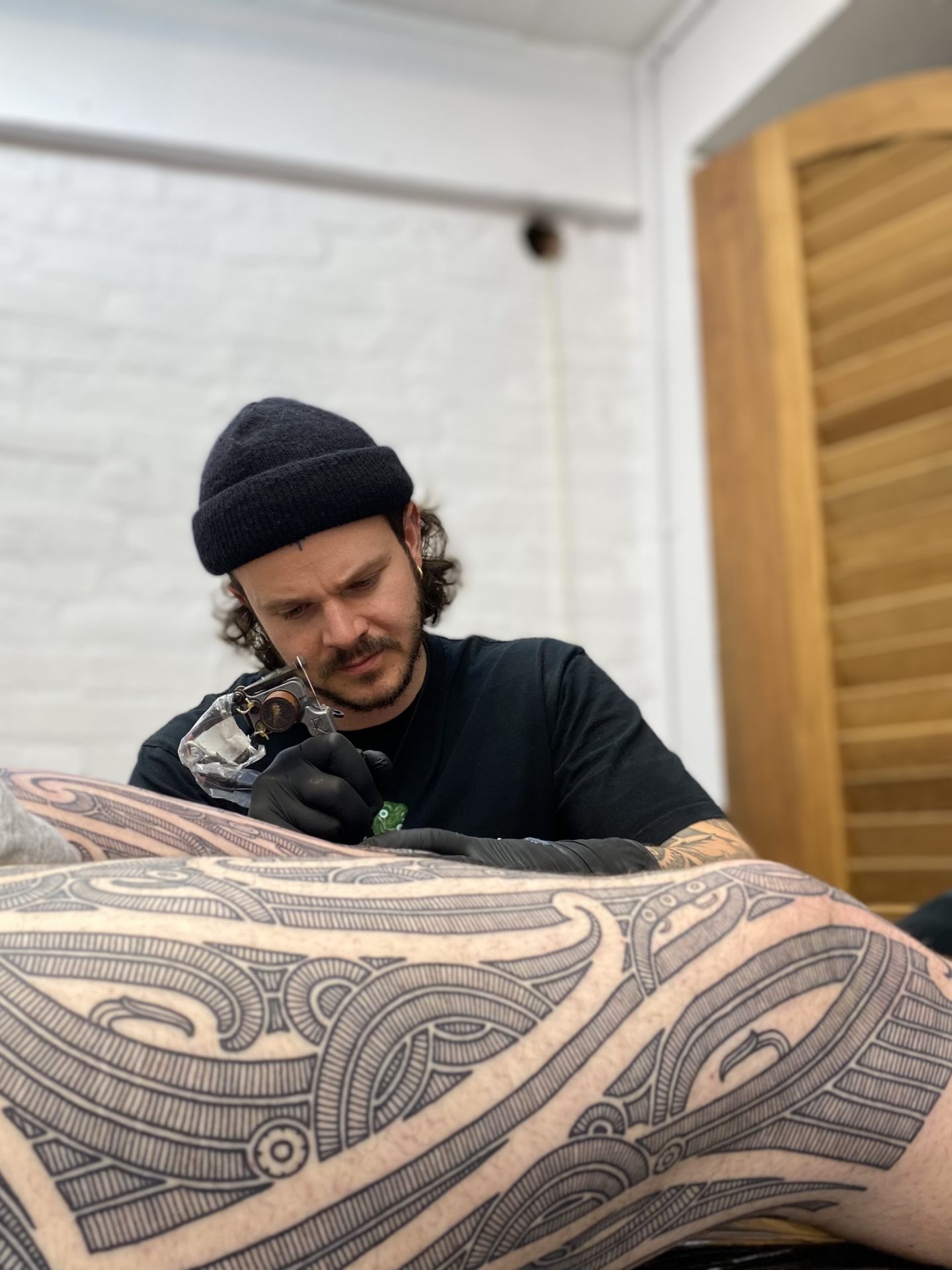 How did your iwi and the people around you react to you putting your own spin on those designs? Is that kind of the evolution of the artwork?
I haven’t met any resistance so far. I think when it comes to my iwi, where I’m from up north, through colonisation and Christianity, we lost pretty much everything in terms of our traditional Toi practices. You weren’t allowed to wear Moko in churches, so people in the 19th century stopped receiving their Moko. And the missionaries banned carving, and all the carvings were taken down from the houses. So the carving was gone, the weaving, the tattooing… everything like that disappeared. 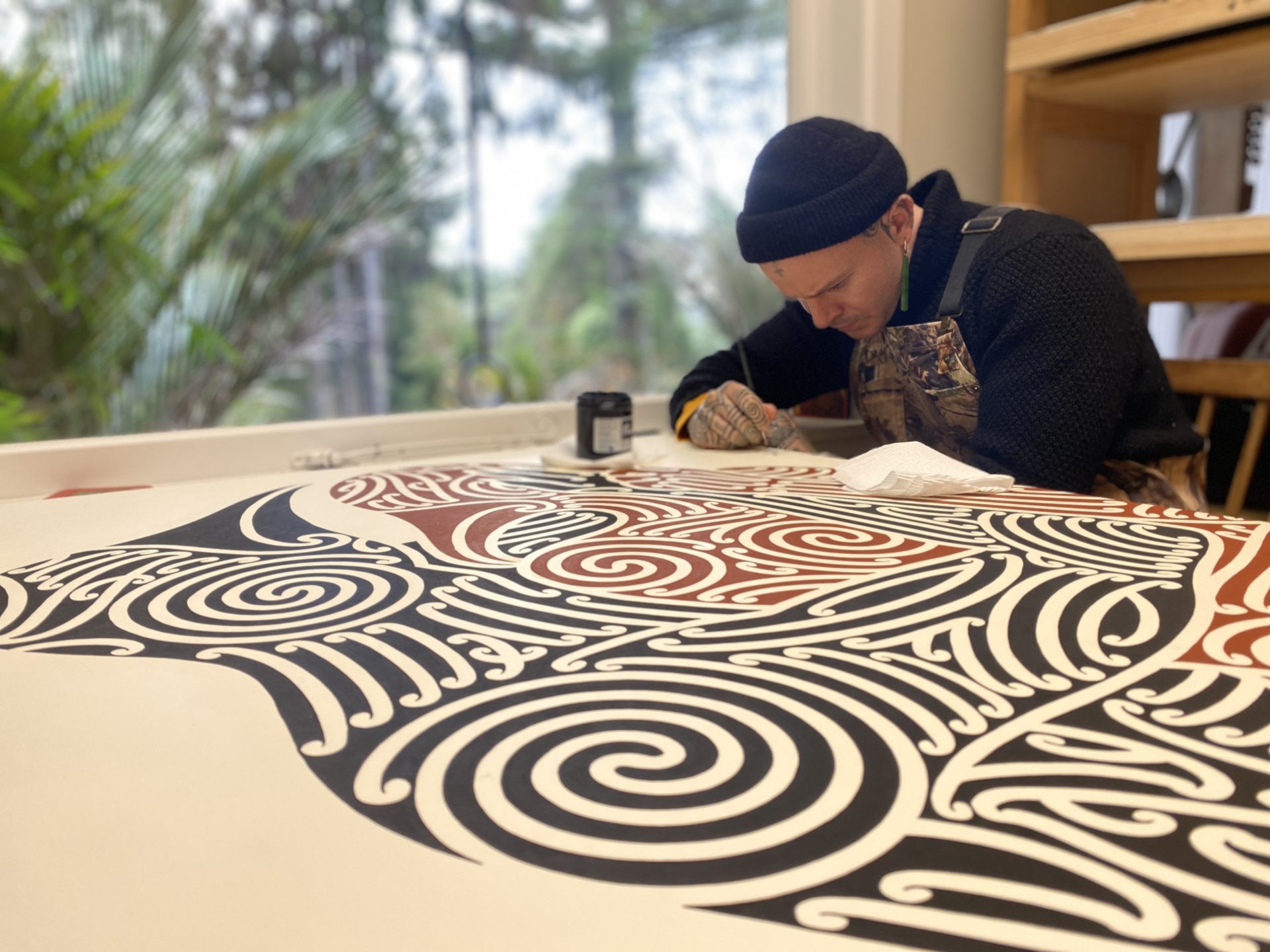 So you’re bringing it back.
That’s one of my missions, to see our traditional arts flourish again in the north, and there are a lot of other artists doing it as well. There’s a big resurgence in Moko Kānohi, which is a moko on the face for men and women.

It’s really great there’s a huge resurgence of support and awareness around Te Ao Māori in mainstream culture. It feels like a permanent thing, that maybe Māori is being acknowledged as a huge part of who we are out here in New Zealand.
Back in the eighties and nineties, there was a lot of negative portrayal of Māori culture in the media. It was portrayed through gang culture. So there’s been a huge push to sort of change the direction of that and portraying Māori as upstanding citizens, which is really good. Rather than being portrayed as the bottom of society and not doing well, which only perpetuates a downward spiral. So yeah, things are changing and it’s great to see that and to be a part of it as well.

That’s awesome. And speaking as a pakeha, learning about Māori culture is a great way to connect with the country. There’s a real connection to the natural world and it’s a way of approaching life that’s not so regimented to a non-natural way of looking at things, which I guess is really good for everybody the world over to think about. Also, speaking of giving back: you’ve partnered with an organisation called KidsCan for this collection, is that right?
I thought that donating to a charity that supports kids is a great way to start because they’re going to be the next generation to take everything over. 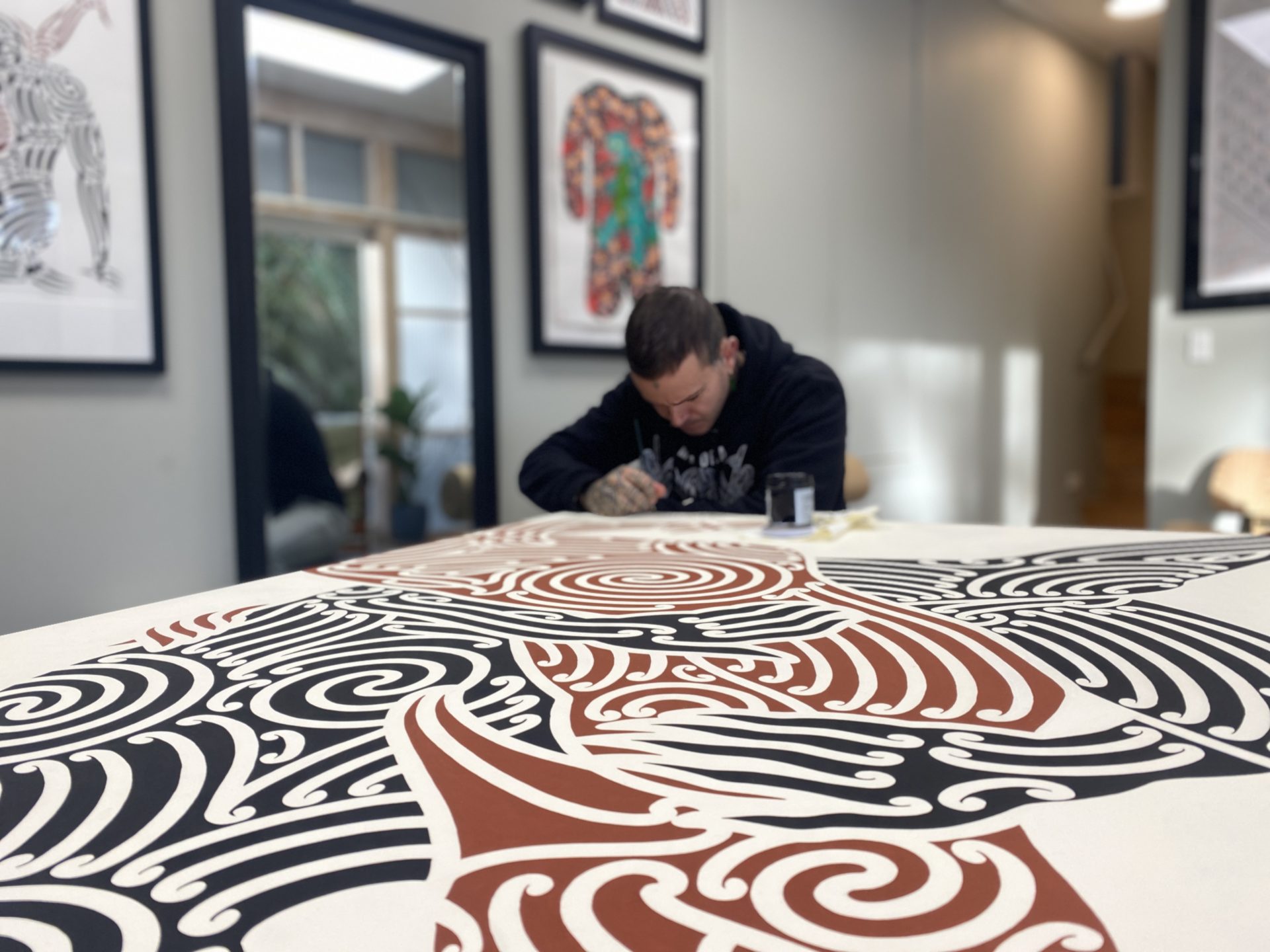 You talk about how part of your practice is continuing to learn and you also talk about heading towards giving back to a community. Where are you headed in the future, do you think? Do you have a plan for where your practice is going to take you in the next five or ten years?
In terms of learning, one of my primary goals at the moment is just to study Te Reo Māori, because my daughter goes to a Māori school. I want to be able to support her and be able to speak with her in Te Reo Māori, and have a better in-depth understanding of my own culture.

How would you describe the significance of Te Ao Māori culture and Aotearoa New Zealand?
It’s quite a hard question. I think in terms of Toi Māori, a big part of it would be identification. For a lot of people, our art is as recognisable as only belonging to Māori culture. So we as Māori feel a really strong connection with that and it gives us a sense of pride and identity and feeling connected with our culture.

So it carries a lot of power and significance with it.
That’s how we told our stories, and how we represented our ancestors. 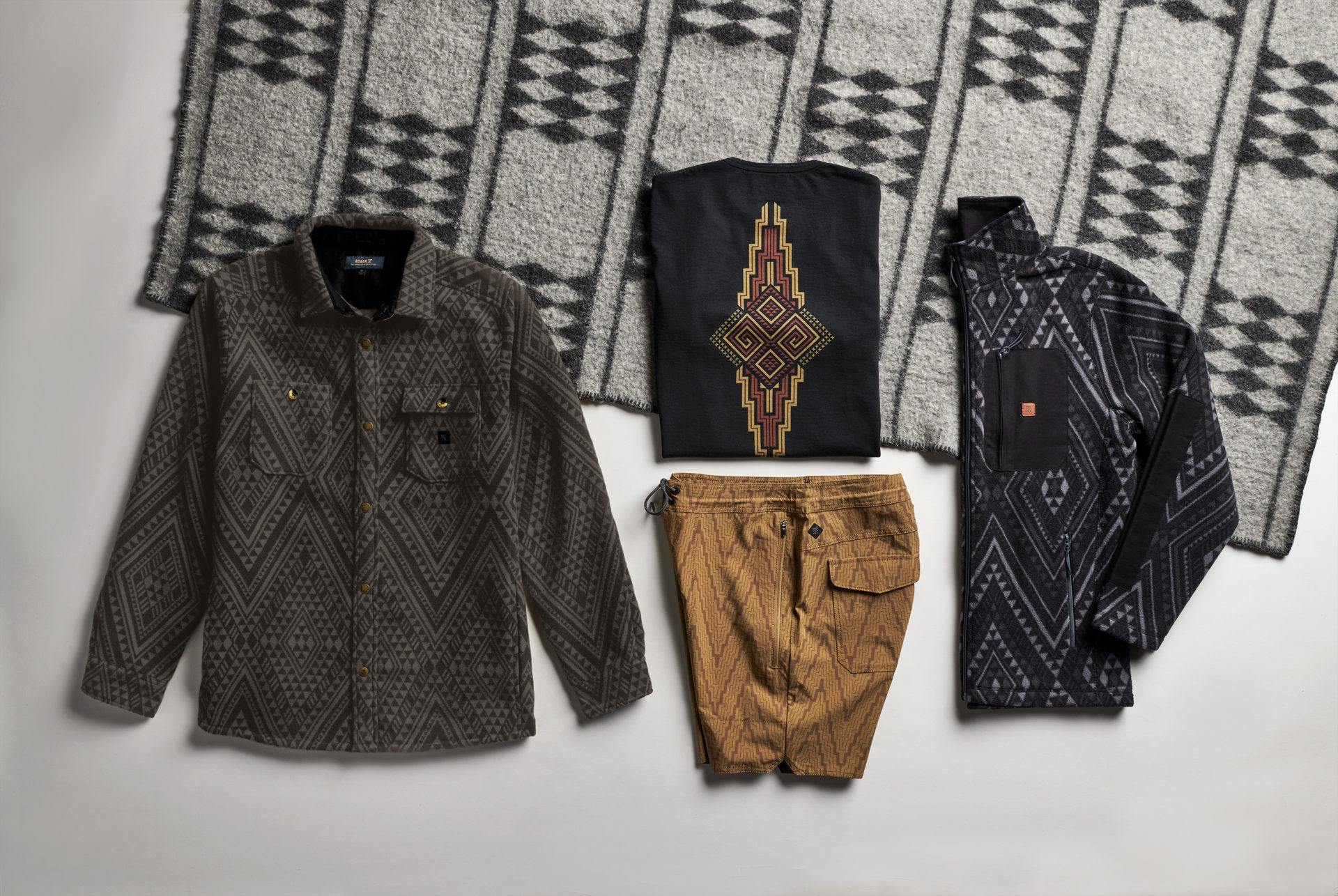 A portion of all the sales from the Roark x Manawa Tapu collection will be donated to Tristan’s charity of choice, KidsCan, which is New Zealand’s leading charity helping kids affected by poverty.