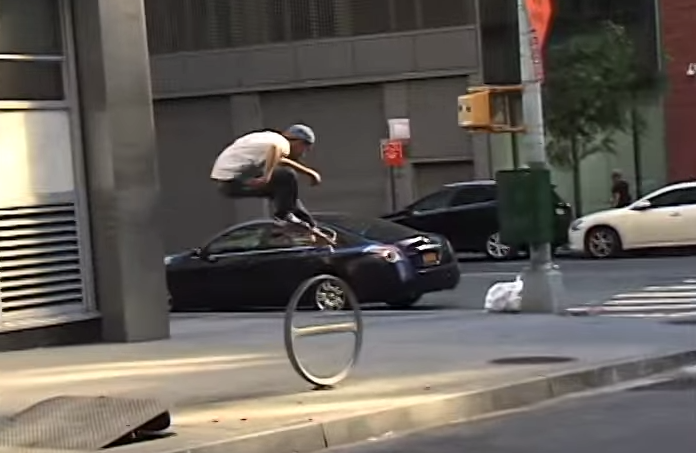 Behind the obvious bullshit that surrounds skateboarding lives a good list of people, ideas, and companies that are actually exciting. A handful of companies like Magenta, Palace, or bronze 56k are putting out material with refreshing twists that shy away from what typical skateboarding has to offer.

Then you have series like GX1000 that shows skateboarding how it really should be shown. Nick Von Werssowetz  (aka LURKNYC) is putting out the most exciting stuff we’ve seen in the past few years. Rugged and rigid, LURKNYC shows skateboarding in its truest form. Nothing but raw spots and raw skating. From the filming to the thematic selection, Nick is fucking good at what he does, plain and simple.

What started off as a few montages, LURKNYC has turned into a repertoire with four full videos and numerous shorts that has kids constantly refreshing his YouTube page waiting for another edit. His filming is eerily reminiscent of an Eastern Exposure 3 with its lo-fi feel and head-nodding hip-hop selection. His fifth video, Strangers, (featured above) dropped last month, so we caught up with him to talk more about his history, his filming process, and Strangers. Turns out it was his first interview ever. 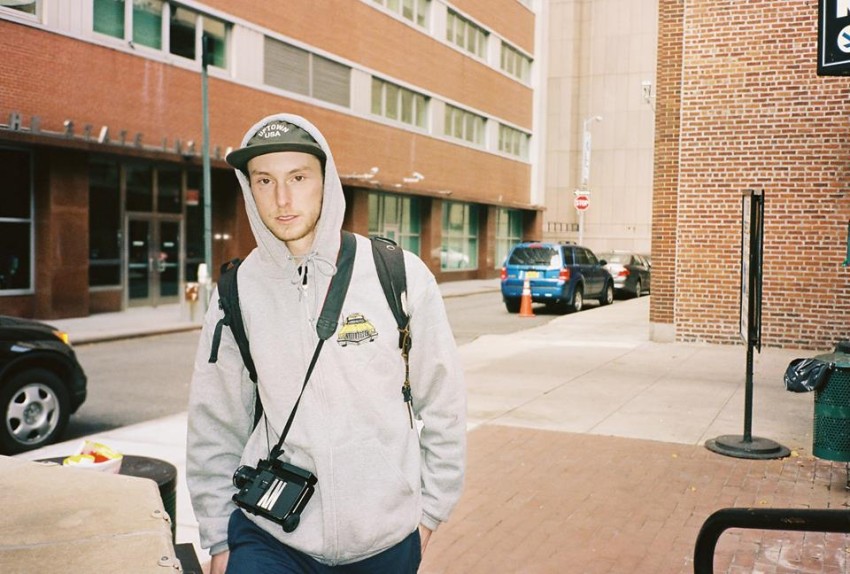 MC: This your first interview, so lets start with the basics. Are you originally from New York?

NVW: No, I’m originally from this town in the woods called West Milford in New Jersey. When I was 18 I moved to New York and started going to school but it didn’t last long. After two years I dropped out and moved to San Francisco.

Why did you decide to move out San Francisco?

San Francisco offered a lot of possibility even though I went there not knowing one person. The weather was the biggest motivator. After going through 20 years of winter you start wondering what its like to not have them anymore. I chose SF specifically rather then LA or other parts of the West Coast because it has a good public transportation system. Or so I thought. Along with that, the skating in San Francisco is iconic and the hills looked too fun. It’s a paradise there.

True. Then why move back to New York?

It’s funny, I moved back because I missed the seasons, amongst many other things. My parents seemed very far away and maybe its just me but I’d start imaging that when I get back they would be old or that they’d die while I was out there. It sounds dumb I guess but because I could rarely go visit them it would constantly eat at me. Besides that, I just missed the feeling New York has always given me. I missed the cheap food and easy pushing from spot to spot. I missed how spontaneous the days were. That’s my favorite thing about New York, you start off with some plan and by the end of the day you’ve skated a hundred blocks in every direction and now you’re at some art show with free beer. There’s a lot more going on as far as the art scene and nightlife over here. I missed those late nights and 24-hour bodegas.

Seems like you prefer New York over San Francisco for skateboarding too.

I really can’t say. I’d live in both if I could. One day I plan to be back and forth but it’s hard to have that established. Yeah, I have friends to stay with but I wish I could afford rent in each city at the same time along with plane tickets back and forth whenever. I know I’ll be back out in SF eventually, but for now I like the busy New York streets.

For not knowing one person, you seemed to gain a huge crew who were all really raw skateboarders. How did you immerse yourself in the city?

It was a lot easier meeting and skating with people in SF, they aren’t as cold there as they are in New York, and you don’t feel as vibed out. Anyway, this kid named Dale Thorn let me sleep on this futon in his room until eventually he moved in with his girlfriend and that’s when Adrian Vega moved into the room with me. These kids Robby Joseph and Jed Gabelman lived in the house too, so I’d go skate with them and their friends. Eventually I ended up meeting a good pal in Alex O’Donahoe, then soon after I met Nick Carracino and Harrison Hafner. That’s when we created Lunchbox.

And that was the name of the crew?

Yeah, Lunchbox was our crew consisting of mostly Nick Carracino, Alex O’Donahoe, Harrison Hafner, Keith Hanlon, Adrian Vega, Kevin Davis, Bobby Groves, and Myself but we skated with everybody. Everyone was cool with people from other crews so we would skate with everybody. I feel as if Lunchbox made a lot of different groups of people into friends. The name came from some pawnshop store clerk selling me this VHS camera I bought which came with a “nice case” that ended up being a blue lunchbox.

Those VHS revival edits you were doing with the VHS1K video and the Lunchbox short you did in San Francisco are ones that really stick out for me. Seems like you might have even hopped on it before Palace. Did those concepts just stem from randomly buying a VHS camera from a pawn shop?

I’m not sure if I did the edits before Palace but to be honest, I didn’t even know what palace was when I made them. It’s ironic that I’d end up filming for them years later though because of Shawn Powers. This kid Logan Lara would film these YouTube clips with all different kinds of cameras and the VHS just felt nostalgic. I ended up walking around the mission district in SF rom pawnshop to pawn shop until we finally found one.

I think people like the Eastern Exposure Vibe and the nostalgia that comes with it too.

I’ve always been a fan of eastern exposure, it’s timeless. It’s how I wish my videos could be but impossible to recreate so if I’m giving out some kind of similar vibe I want that to be it.

But one plus to your edits are the themes. From CCTV to Loony Bin, they all seem to compliment the skating really well. How do you come up with them?

I think skate videos can get really fucking boring really quick and I’m not sure if what I’m doing really helps but I started thinking that if I put themes in there, it would keep it entertaining. I usually base themes off movies I like or things I find in the street. For example the Surveillance Tapes. That was based on a sign I found saying that the building was under video surveillance and it made me realize how you’re being watched everywhere you go. The CCTV screens in stored always caught my attention so I just started filming off of the ones that I could. Then there was Loony Bin, which was based around all the crazy people you encounter in this city. Unfortunately I didn’t run into as many I thought i would during the filming for it, its kind of like finding money on the ground. Sometimes transitioning between each person’s part in the video can be hard and having a theme makes it a lot easier. Now I get kids adding me on Facebook and sending me clips they made with themes in them asking me what I think, one kid even used the same song and similar robbery clips like this one edit i made called.

Even with the lack of crazies in Loony Bin, you still have an abundance of them in the other shorts especially the New York Times.

Yeah, we always have a lot of shit happen. We’ve had a knife pulled on us by some chick in the Excelsior district in SF and also have had this dude telling us he’s going to pull out his pistol if we told him to move one more time. Recently, this lady sat down on this ledge we were skating and wouldn’t move so we told her we’d buy her Halal food if she moved. We didn’t, so she got pissed and ended up saying, “let me show you the crack of my ass”, pulled her pants down, and spread her ass. Then she tried pouring her beer on my camera. A bunch of stuff is always happening when we’re out.

Another aspect are the stills from your videos. I feel like i can stop the video at any point, screenshot it, and have it be an amazing photo. Have you tapped into other formats within skateboarding like photography?

I’ve always been big on photography, it’s a shame the iPhone is so good at taking photos because it makes me lazy about bringing out my photo equipment. I think composition is the most important thing with shooting photos and making videos, so I try to be on point with it.

Talk about your new video, Strangers. The name at first glance has me guessing it’ll be more in the vain of Loony Bin.

It’s not exactly theme based but there are a lot of cut-ins of strange people similar to Loony Bin but with more input from them. I came up with the name because of all the random crazies that come up to me for some reason. Its like I have something they want because they always come talk to me directly. I’m not complaining either; those kinds of people make me laugh. I like all the characters that live in New York, you can learn from them–maybe from their mistakes anyway. In the video theirs footage from Jed Anderson, Cyrus Bennett, Jason Byoun, Stu Kirst, Jacob Gottlieb and Ben Kadow. Then theres a Lunchbox section and a friends section from guys here. Its all New York this time, no San Francisco, which I like and don’t like. Strangers has been kind of a headache. People getting hurt (Stu broke his hand, Ben broke his wrist, and Jacob fractured his elbow) or some people would tell me they want to have parts but flake when it came down to it. It took way longer then I would have ever liked it to so I hope its worth the wait. It’s only 16 minutes too.

I think the length of it has some people mad.

It’s not that I decided to make it 16 minutes, it’s that I didn’t want to let it take any longer. People have small parts but it’s interesting. The 16 minutes goes by very quickly–even for me–and I’ve probably watched it a thousand times making changes. It could have been a lot longer if I never made the New York Time series but I love those little edits, they are fun to watch because its just the bullshitting that goes on when your out skating here. I didn’t want to put that footage into the video but I wanted people to see it, hence the title, “New York Times”. People seemed to really appreciate those edits and from what I’m told it makes them feel like they live in New York.

What’s next for you and the LURKNYC edits?

No real plans, just waiting for something random to come into my head.

LURKNYC’S Strangers is available to pick up here, and you can keep up with Nick and LURKNYC on his YouTube page.