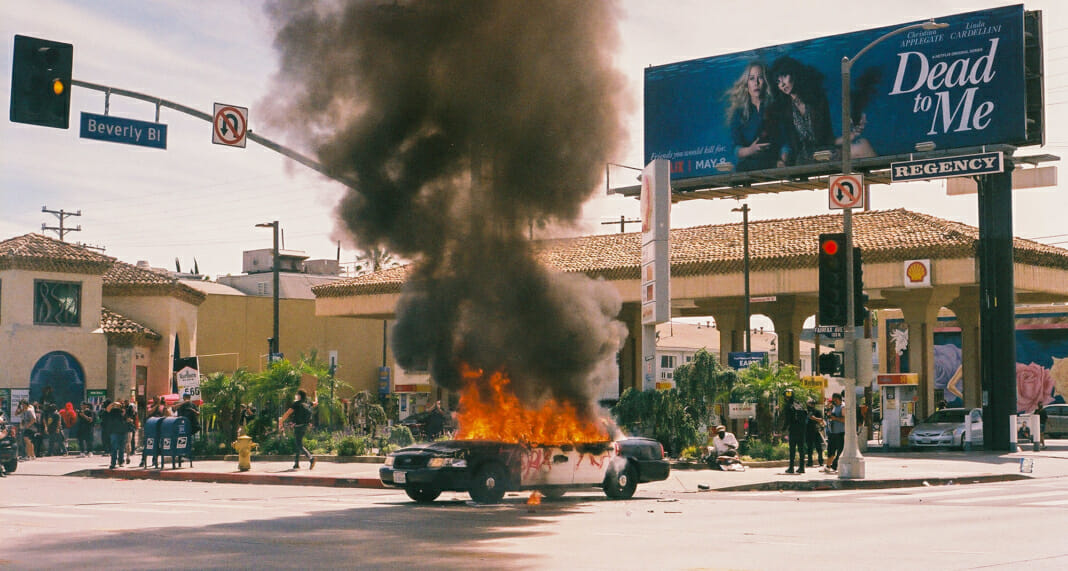 Lexis-Olivier Ray was running late for our interview, so he took his skateboard to breeze past the Sunday bumper-to-bumper on Wilshire Boulevard, a major artery of central Los Angeles.

It’s his ideal means of transportation as a field reporter, though it’s not always practical. When you’re one of the Los Angeles Police Department’s most wanted journalists, you have to bring your camera around, too.

Ray thought he was going to be a filmmaker, but his love of cameras also opened the possibility of image as reporting. Nowadays, he’s known in Los Angeles for his coverage of housing and policing issues, but his artistic interests are multidimensional. In New York, Ray stumbled into an assistant director role for R&B artist Tinashe’s music video. Almost five years later, he became a name among Angelenos and authorities alike for his infamous shot of an LAPD cruiser licked in flames, corroding before a Black Lives Matter protest that came face to face with a hostile police force.

The art of seeing has yielded amazing moments on the field for Ray. It has provided him with a trove of photos for upcoming shows, zines, and video documentaries on policing, housing, and culture. It’s also no secret that Ray thinks you could do it, too.

Ahead of his November group show On The Ground: Los Angeles at Art Share L.A., Ray spoke to Monster Children about reporting through photography and how 2020 empowered Angelenos to start filming. 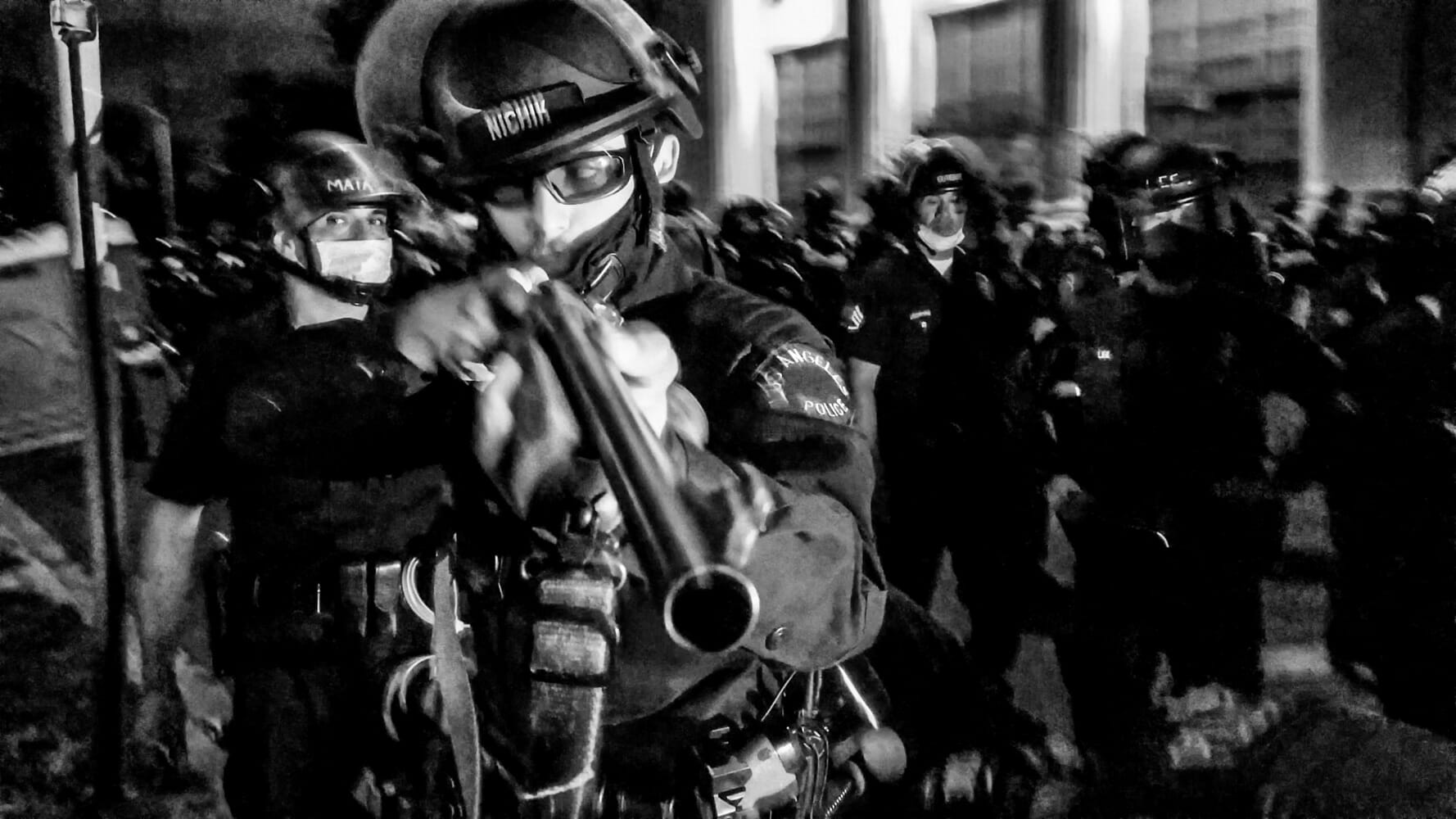 You seem really busy. What did you do this weekend?

I was working until late last night. I am shooting a documentary with Film the Police LA. I’m doing a story on [the account owner] William and his cop watching, so I’ve been shadowing him for a few weeks. It’s been really eye-opening to see policing from his perspective.

Do you take days off? What do your breaks look like?

I took it easy during the day yesterday, but no, not really. I worked from 9 to 4 in the morning and got four hours of sleep. It’s difficult to take breaks. I always have my camera on me and a lot of my photography is documentary-based, so if I see something, I’m going to take a photo of it. So on that level, breaks are hard. It’s especially hard with writing. I always want to get a head start.

How’d you get into photography? Did you see yourself doing both photography and journalism at once?

I started taking photos as a kid. My mom was a photographer, and she had a darkroom in our basement growing up. She took photo classes, and I would go with her. She eventually gave me my first camera—a Holga—and then I’ve just been taking photos for most of my life. Later on, I got more into video and tried to make movies. It was self-taught, and then I ended up going to film school. I went to college in New York for that, lived there for eight years, then moved out here in 2016. But in film school I still always had a camera with me, so I was always shooting photos. Then I got into writing through photos. I started off with photo essays and then expanded on that. 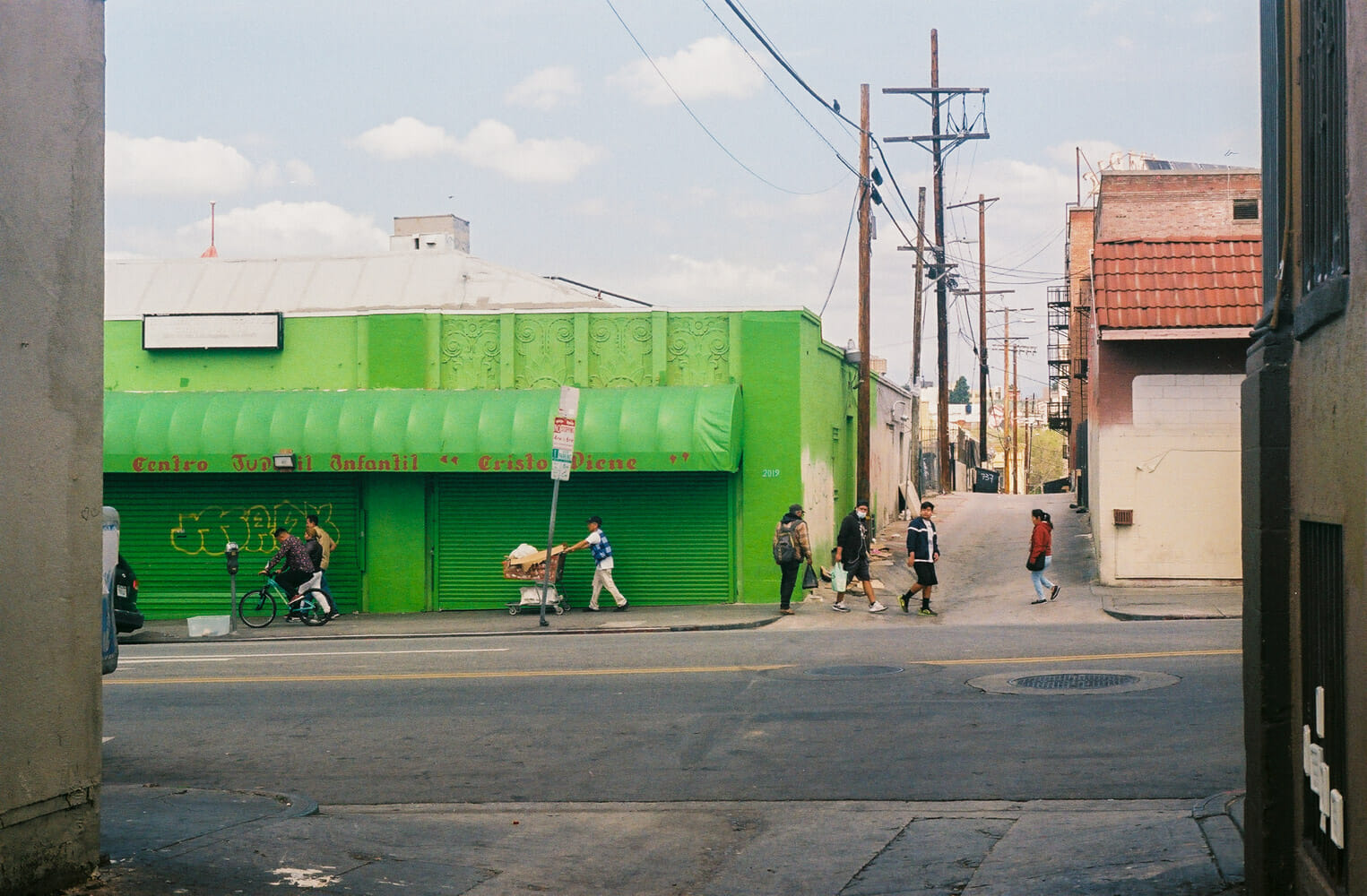 2016 is so much more recent than I would have guessed. I turn to you for LA stories.

I surprise myself sometimes too. But I had family and had siblings who grew up in Inglewood and South LA. As I got older, I started coming here pretty regularly. At some point, I was just ready to move out here.

Photos have always been a way for me to get out and see things. Growing up in Connecticut was really suburban and felt really confined, so it was an excuse to go out and explore a bit. That’s how it is even now. It’s more about exploring than it is about taking photos.

What does film photography offer you that digital doesn’t?

A huge part of it is that that’s what I learned. I’ve never really shot digital like that. Now when I pick up a digital camera that I’m not familiar with, all the menus and interface don’t really make sense to me. Film is really simple. The cameras I use are really simple and reliable. Some of them don’t even take batteries and are all manual. Film strips everything down to its basics so then you can focus on the imagery.

What cameras do you like to use when you are shooting at leisure? What digital cameras are most reliable for you when you are on assignment?

Right now, my main 35MM camera is a Nikon N8008s. Before that, my main 35mm camera was the entry-level Pentax K1000. I pretty much shoot all my digital photos exclusively on a Samsung Galaxy 8 phone. It takes pretty good photos and is the most straightforward to use and upload/share. I recently got a Panasonic S5 for video, which I’m very happy with. 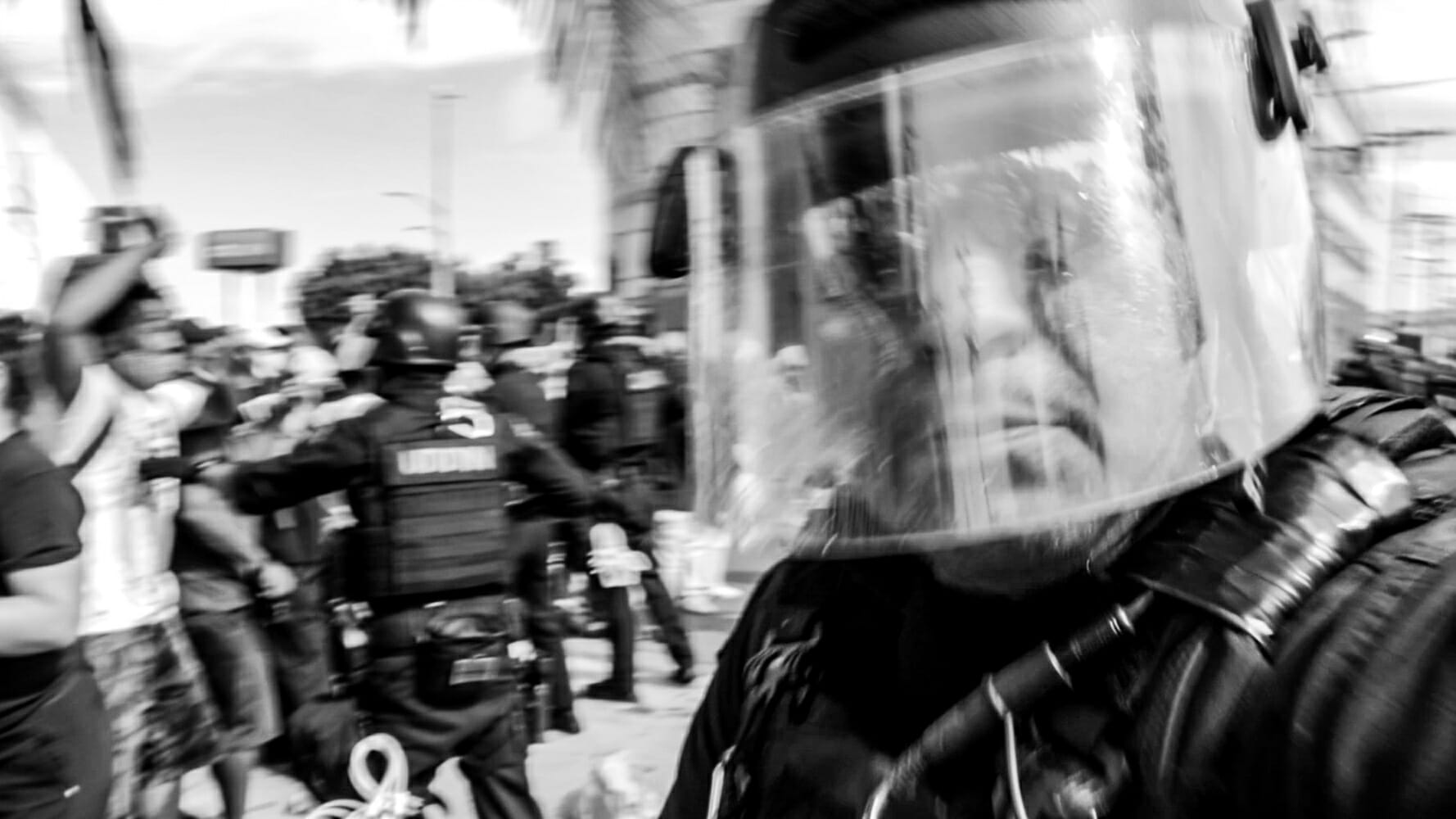 You worked on Tinashe’s music video for “Party Favors” as an AD. How did that happen?

Interesting story. I lived on the top floor of an old brownstone from the 1920s when I lived in New York. One day I came home and noticed some sort of a production on the ground level. I got up to my apartment and found out my friend was working on the shoot. I think they texted me saying, ‘Yoo, I’m shooting a music video in your apartment,’ or something. I went down and I happened to know a few of the crew members because of film school, and I also knew some of the talent from throwing parties. On the spot, the DP/Director asked me if I would AD the rest of the shoot. He mainly wanted me to use my connections with everybody to keep them on schedule because they were having a tough time managing the talent. Working with Tinashe was cool […] and I got to see what the ground level apartment looked like, which I had always wanted to see.

Would you ever return to the music video space?

To be honest, every music video production I worked on was a mess in some way, with the exception of the Tinashe shoot maybe. There’s usually not enough money, time, or resources. And then you also have to deal with egos. Executing an idea can also be really challenging. But back when I worked on them they were an easier entry point into the industry than other routes, and sometimes you can make decent money. If the opportunity presented itself again I would proceed cautiously.

What do you have going on right now?

My next zine about the MacArthur Park neighbourhood is printed, and then I have the On The Ground group show coming up November 6th. The show is a bunch of people who know each other and have been shooting together over the last year. It’s us coming together and reflecting on things. 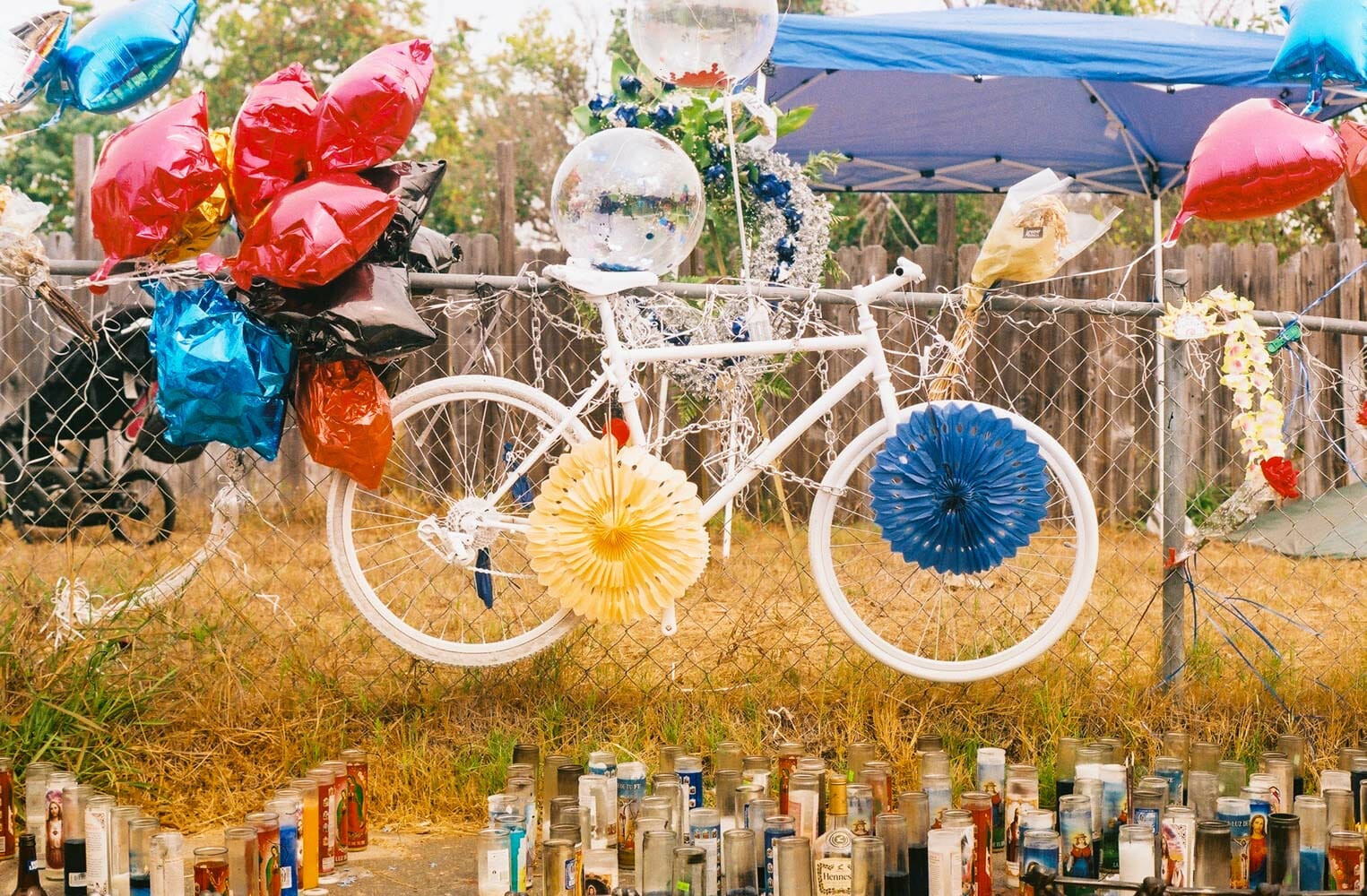 2020 brought a lot of opportunities for people in LA to become photographers, in a way. There was a lot happening, from the pandemic to uprisings. What does the photographer scene look like, one year later?

In the last year, I saw a lot of people who didn’t necessarily see themselves as photographers get into the practice and start documenting everything, especially at the protests. I feel like people started to feel empowered to document and take photos. That’s really cool to see. For a lot of people in the show, this is their first time showing work. They were able to nurture their photography skills over the past year while once-in-a-lifetime events were unfolding.

Tell me more about the MacArthur Park zine.

I learned a lot from making it. It’s basically three years’ worth of 35mm photos, but mostly shot during the pandemic. Last year when the pandemic first hit, I lost a bunch of work and was trying to make sense of things. It was so confusing. I was wondering just how long any of this would last, so I started walking five to 10 miles a day. That’s how I came across a few of the stories I worked on: mainly observing, going to stores, going up to food vendors, and talking to people. In the end, I was really drawn to MacArthur Park. I love how it’s so dense… it reminds me of New York a little bit.