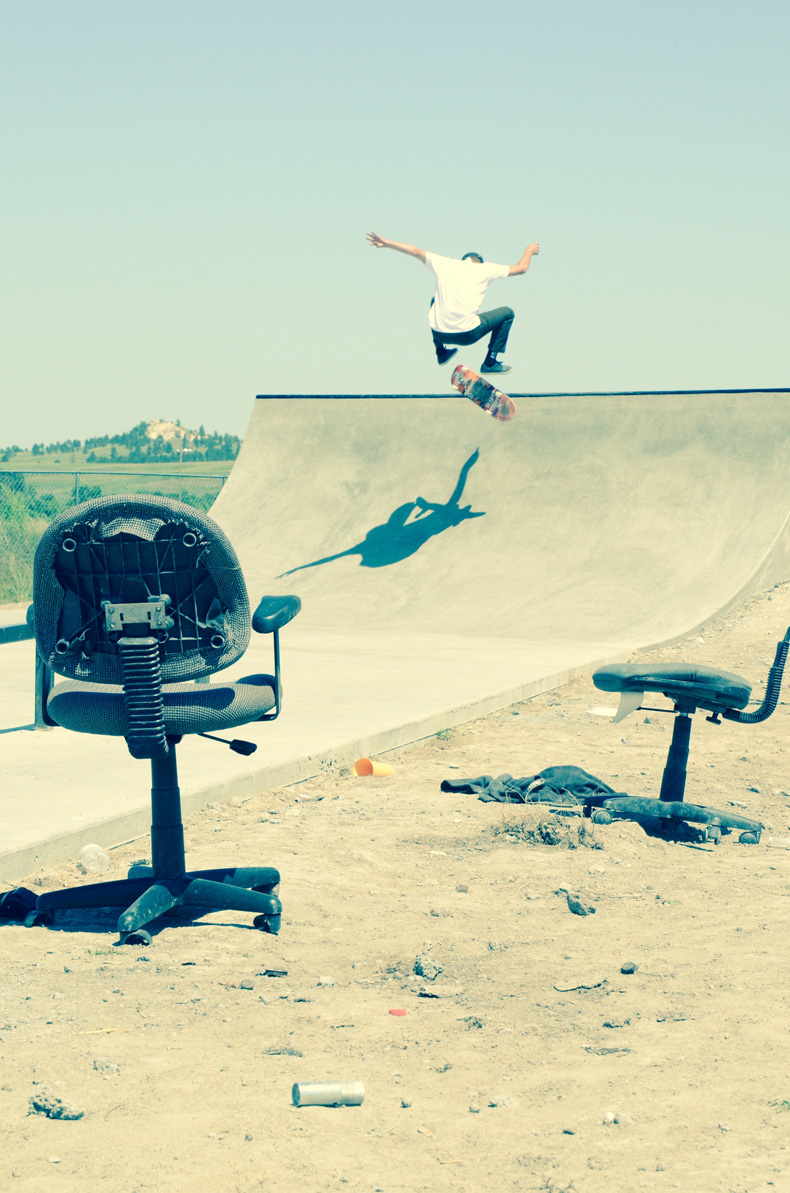 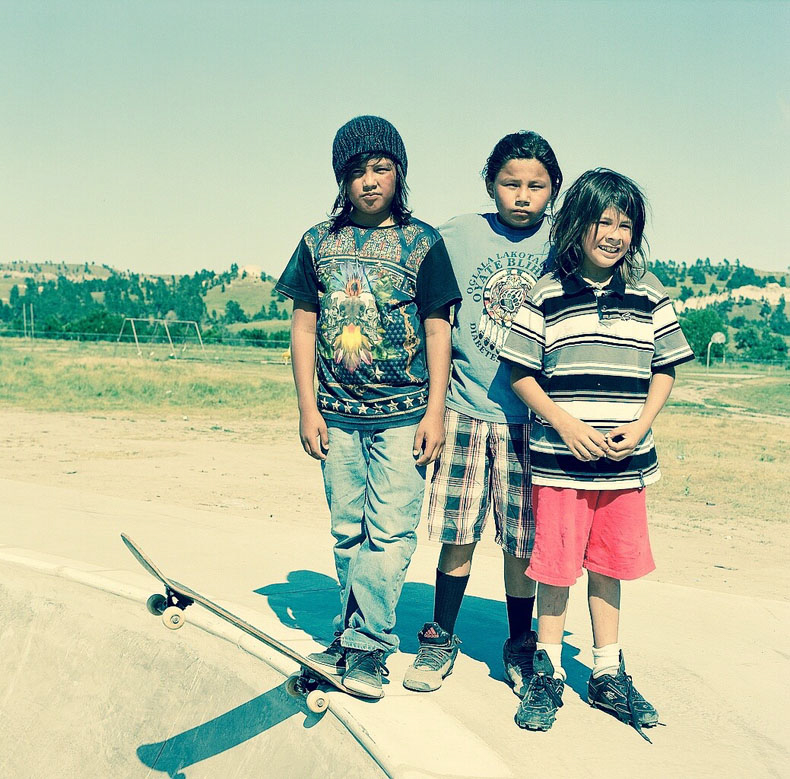 During a spring visit to New York, Matt Sharkey had mentioned that Levi’s would be doing a build on an Indian reservation in South Dakota. They’ve been lending time, money, and labor over the past few years to the build a number of parks worldwide, D.I.Y. and government-sanctioned.

I e-mailed him like, “Y’all done yet?” and he was like, “Nah, but I’ll ship you out at the end of July and we’ll get it. The parks will be done and there’s going to be a big pow-wow.” So, end of July rolls around and I find myself arriving in Rapid City, South Dakota to bear witness to and skate the Pine Ridge Indian Reservation with the Lakota Nation and some of the best skaters in the biz, including Marius Syvanen, Josh Matthews, Pat Moran, Joey Pepper, and Jerry Mraz. 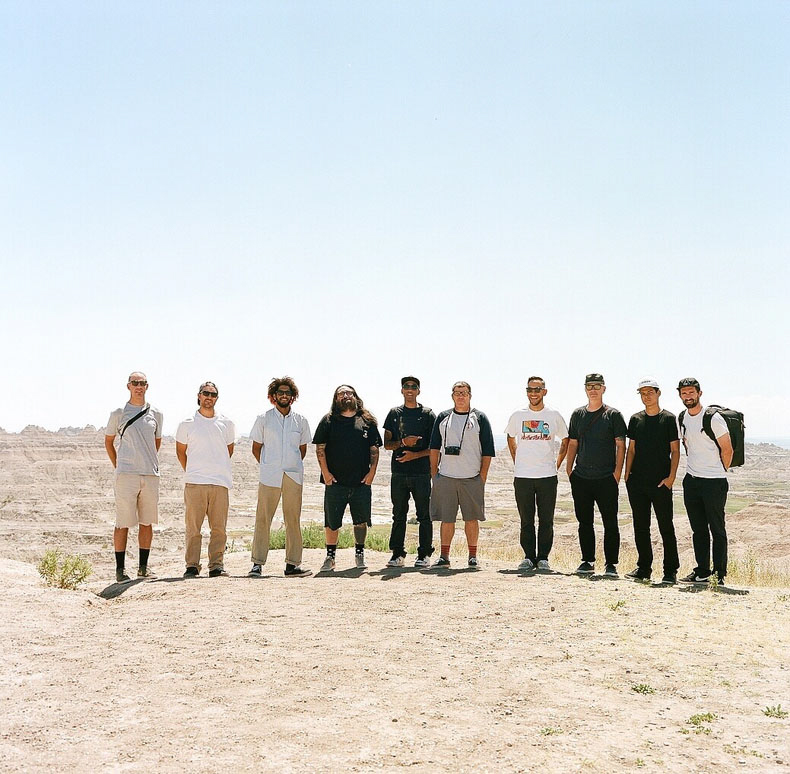 Upon arrival, I came to learn that there was something far less chill going down in western South Dakota simultaneously: the seventy-fifth annual Sturgis bike rally, a.k.a. the largest motorcycle rally in the world.  While they usually expect half to three-quarters of one million riders to attend, this year was projected to see well over one million. Meaning that while plenty of these dudes may well have been your stereotypical, aggro, drug-dealing, hog-ridin’ criminals, the vast majority were the two-wheeled equivalent of Sunday drivers taking a week off from their accounting jobs to dust off the ‘ol du rag, and huck their motorcycles out by the truckload as they kicked back in business class. The social climate of Rapid City and the places nearby was fucking weird. A highly-policed, highly-commercialized destination for a subculture of retirees flocking for a week out of the year to ride around without confidence, buy up all the kitsch that they could haul, and get really, really drunk. There were juggalos, cover bands playing Skynyrd, the guy from Orange County Choppers, and probably twenty to thirty cumulative miles of yellowish-gray hair. 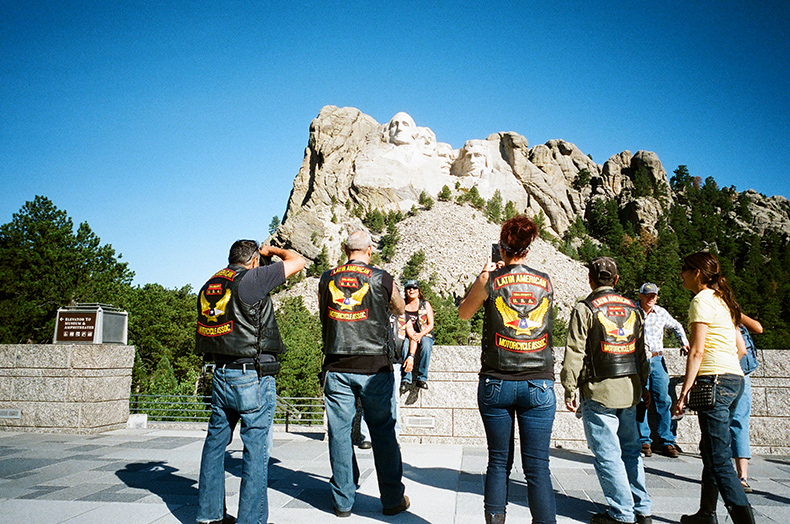 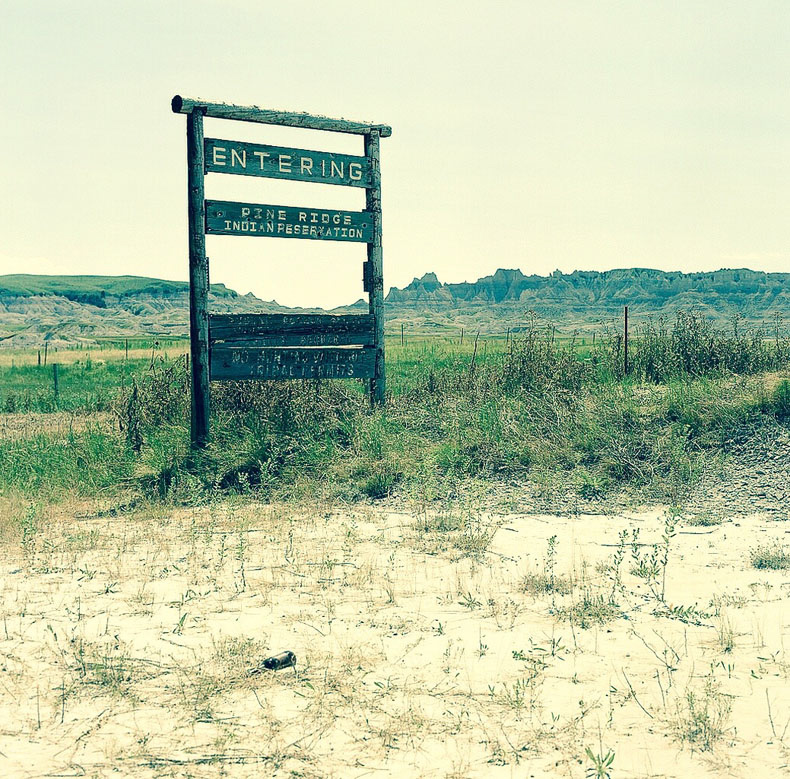 And then there was the reservation. It seems that it wasn’t up until the past decade or so that many of the world’s more disenfranchised areas began to reap the benefits of skateboarding, and the Pine Ridge Reservation is without question the most disenfranchised place I’ve ever been. It’s the eighth largest Indian reservation in the country, and the three counties, which comprise it, are the poorest in the nation. 80 to 85% of its population is unemployed. It has eight times the national rates of diabetes and tuberculosis, and five times the national rate of cervical cancer. Alcoholism plagues around 80% of the population. One in four children show signs of fetal alcohol syndrome or fetal alcohol spectrum disorder. The life expectancy on the Pine Ridge Reservation is the lowest in the United States, and second lowest in the Western Hemisphere (the first being Haiti). As a result of these conditions, youth suicide has been an epidemic. In 2015, fifteen people between the ages of 8 and 15 have committed suicide. 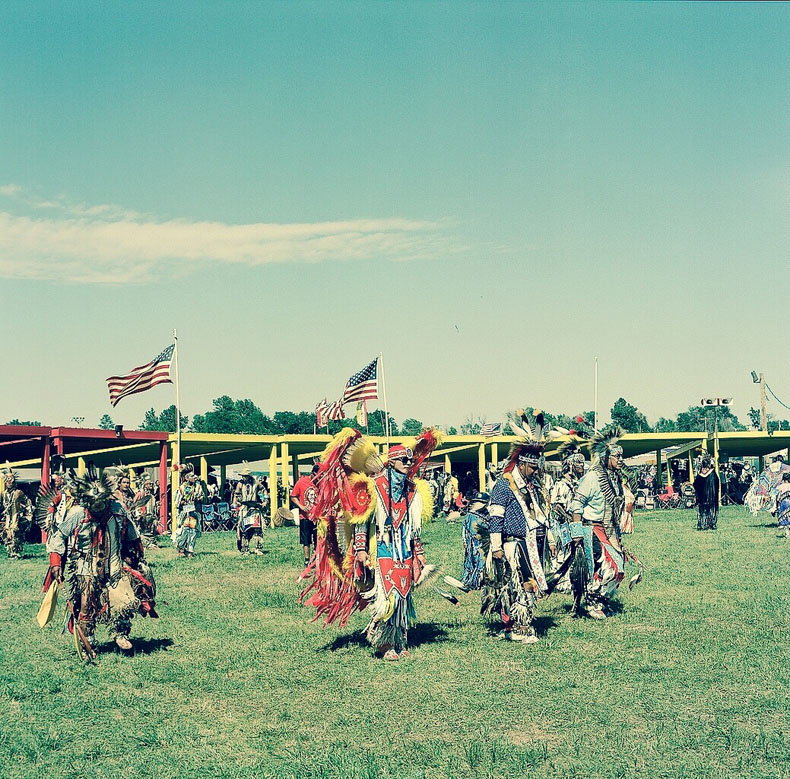 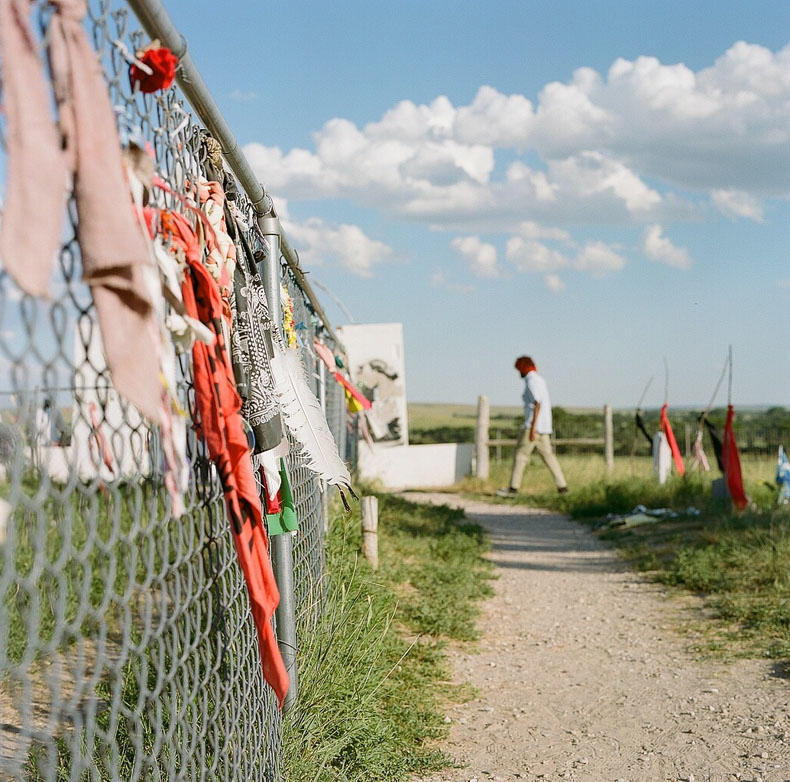 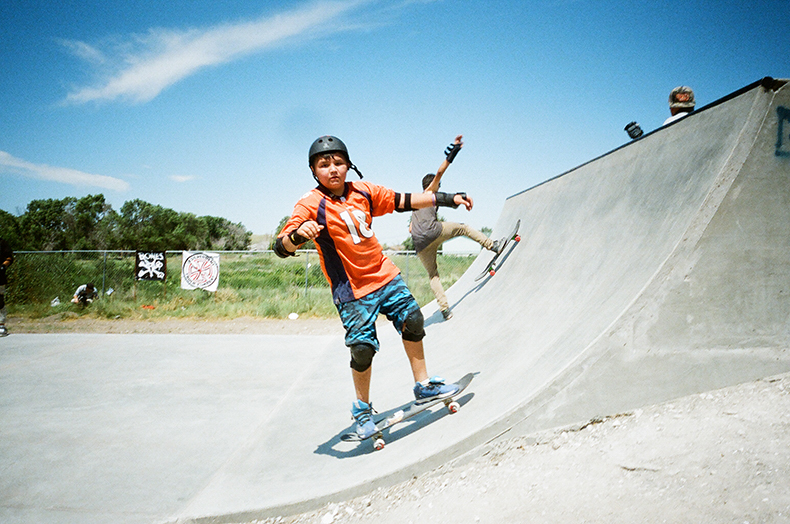 Then there are the people and groups who are working to reverse these conditions. Jim Murphy, a New Yorker and member of the original Alva Skates team, started Wounded Knee Skateboards with the great Andy Kessler a few years back. In this time, he has used the proceeds and product from the company, while raising resources elsewhere, to promote creativity and self-worth to young Native peoples through skateboarding. Walt Pourier, who himself is Oglala Lakota, runs a non-profit called the Stronghold Society, whose task is to inspire “confidence, creativity, hope, and ambition for the youth of Native communities and non-Native communities through leadership development, arts programs, skateboarding and athletic activities while encouraging youth to take action to live a healthy life in mind, body, and spirit.” Between them, and with aide from companies such as Levi’s, they’ve made it possible for these two skate parks on the rez to exist. 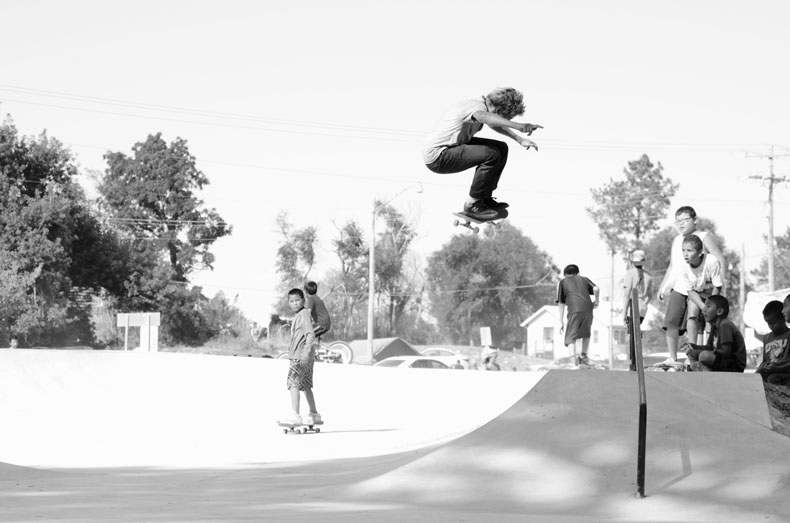 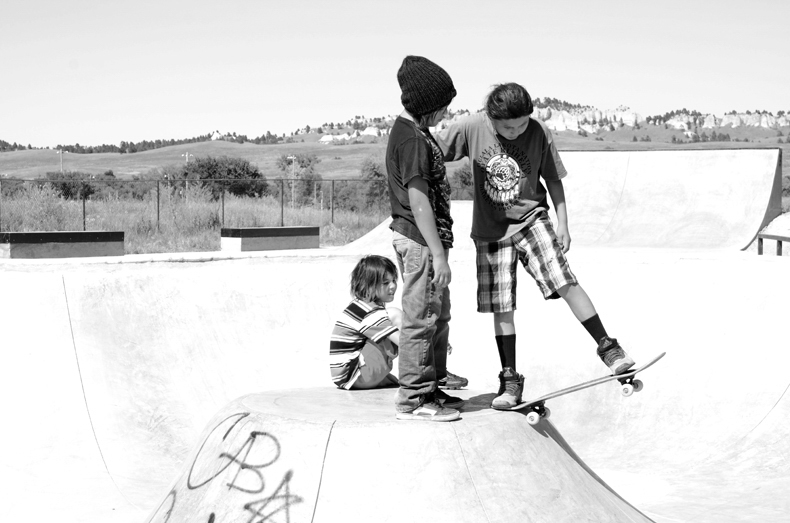 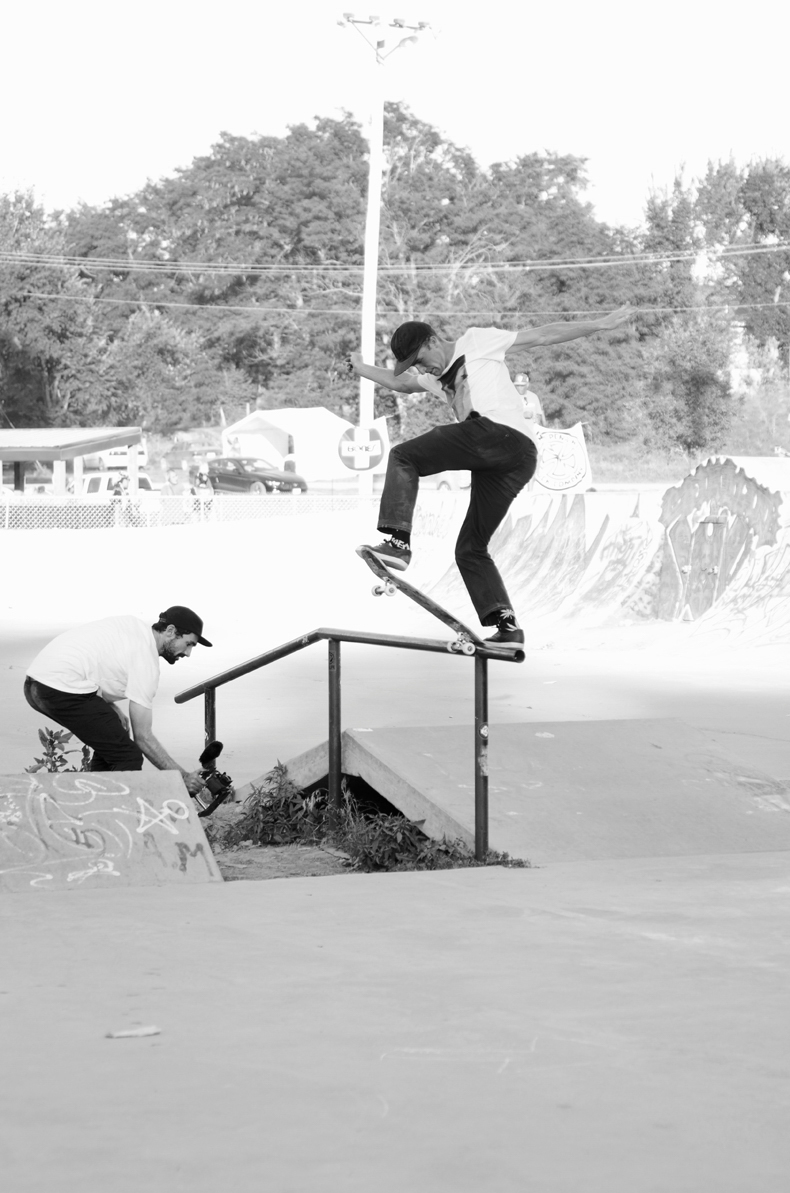 The first park, Four Directions, is in the central town of Pine Ridge. It was actually built a year ago but with the building of a second park, the guys at Grindline also worked to double the size of the first. The second park, entirely new as of my arrival to it, is in Manderson, right down the road from the site of the Wounded Knee Massacre in which, in 1890, the U.S. military disarmed, murdered, and mass buried over 300 Lakota people. It’s important for the Lakotas to hold on to these histories, shared orally between generations, because so much of their culture and religion was systematically shot, burned, and suppressed over the past few centuries. Up until very recently, doctors on the reservation, when delivering Indian births, would forcibly sterilize Native women. It is for this reason that abortion is now illegal on the reservation—repopulation is vital. It is then an anomalous tragedy to see so many youths annually making the decision to end their lives.

With all this being said: skateboarding works.

It’s the perfect outlet for an at-risk child. It makes you look cool as shit—way cooler than smoking. By becoming skateboarders, kids join a worldwide community of all different types of people who accept you for who you are. It’s creative and inspires a unique, alternative perspective. While being inherently mischievous, it also creates a work ethic. It teaches kids to set and achieve goals. In every way, it makes a kid feel good about him or herself, with a constant yearning toward self-improvement, which is something that extends much further than merely the act of hopping around on a four-wheeled toy.

And dude, these kids were feeling it. They were psyched.

It was a full weekend party with a bowl contest and music. The pow-wow is held on the adjacent field and people were gathered from all around to appreciate the positive shit that was going down. Dudes and chicks alike were getting busy in the deep end, while the Levi’s pros went in and showed the kids the limitless potential that a skateboard doth possess. I saw so much progress in the two days I spent on that reservation, because it’s something that these kids want so badly to be good at. They are going to be better than any of us in a few months time: just watch. This shit helps you forget what’s wrong, and appreciate what’s not, even if just for a few hours, and in many cases, that’s all it takes to make a person value their own life. With self-worth comes a reverence for life in general, and when enough people got that, that’s when you can really start gettin’ busy and making some heavy, posi changes. 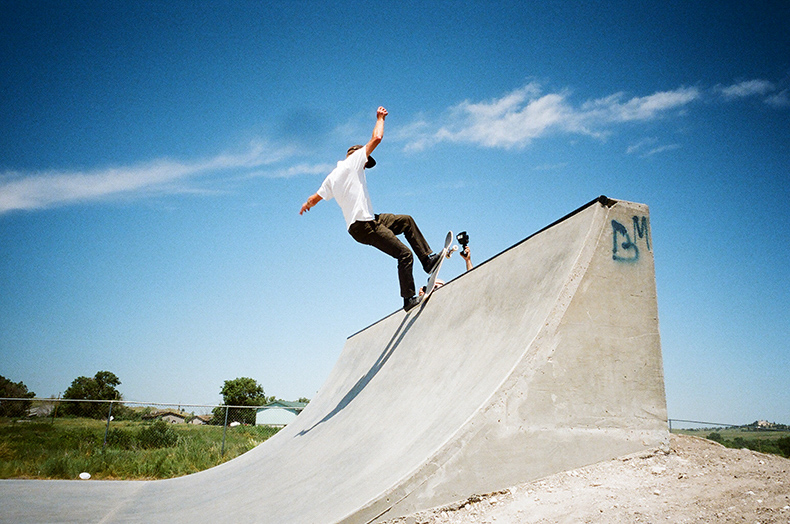 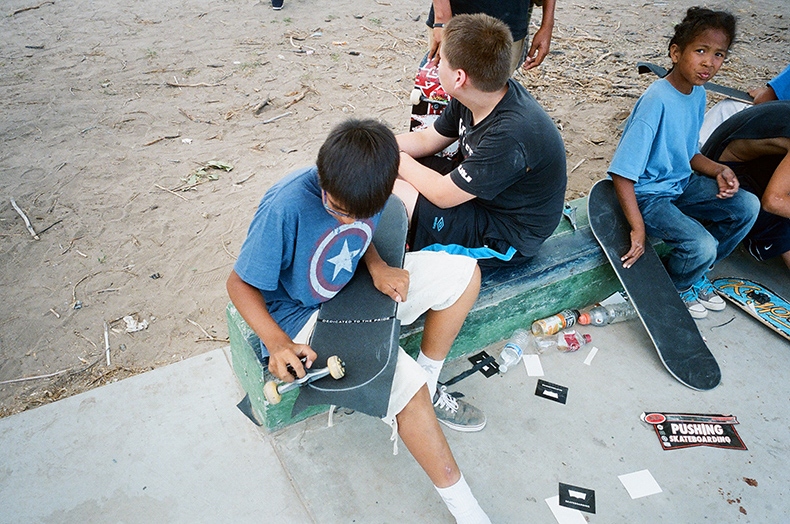 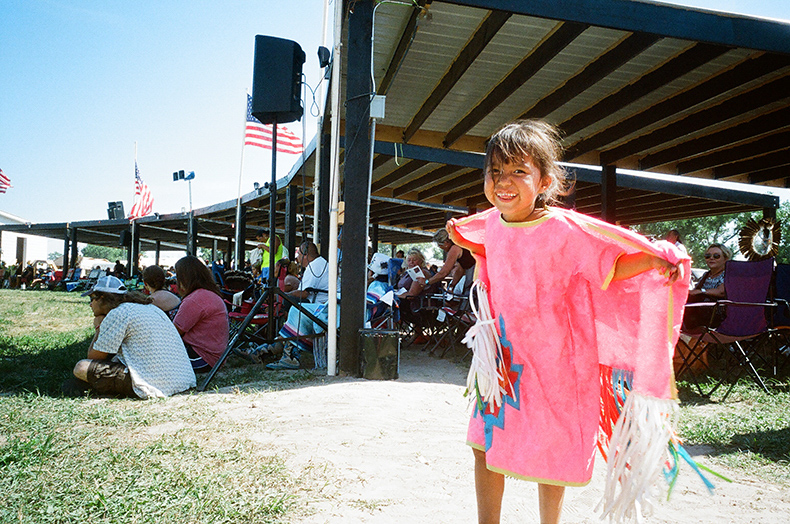 Props to everyone involved—Levi’s, Independent, Bones, Wounded Knee Skateboards, the Strong Hold Society, and Jeff Ament’s Army for the generosity and for spreading the vibes of skateboarding—and endless love to the Lakota Sioux for so warmly welcoming us and for being so effortlessly beautiful and resilient. Stay tuned for Greg Hunt’s documentary of the experience. Live life, skate ‘til you can’t, be nice to people, and, unless you have paint airbrushed onto your tits, stay the hell out of Sturgis.

SEE MORE IMAGES IN THE GALLERY: