Ideally, we’d live in a world where concepts such as “racism,” “systematic oppression” and “colonialism” don’t exist.

Unfortunately, that is not this world and we live in a time where colonialism is alive and well. Born from a disgust for this colonialism, and also of a hopefulness for a future without it, is one of the most interesting, thoughtful and beautifully executed skateboard brand concepts I’ve seen—Colonialism Skateboards.

Michael Langan, a Cote First Nation aboriginal artist and skateboarder from the Treaty 4 Territory in the Saskatchewan Province of Canada, is the founder of Colonialism boards. He aims to use skateboarding as a means of engaging with “the complex and untelling aspects of indigenous Canadian history and culture.” As a teen, Mike moved to Regina, the capital of Saskatchewan, and embedded himself in the small city skate scene there, focusing his life around the familiar hallmarks of the culture—hitting the streets with your friends, having a good time, and generally not worrying about anything else in the world because, hey, who needs to when you have a skateboard? That was until he attended a trade college and took a basic Native Studies class, where he soon became as passionate about his native history as he was about skateboarding.

Mike read the book Clearing the Plains by James William Daschuk, which examines the role of Old World European disease, technology and politics in the killing the indigenous peoples of the Canadian plains. “Skateboarding was all I knew,” he explains of his decision to combine the two. “And I found that studying colonialism and skateboarding worked so well together. Skateboarding itself is already so educational. You have to know and learn about your body, the way it moves. Blending them together for me was so natural.” Mike can talk for hours about this blend in a focused stream-of-consciousness that perfectly connects the always roving brain of a skateboarder with the focus of a college student working on their thesis. “I started connecting the dots. I’d seen the suicides and addictions and incarcerations around me that are a result of some colonial policies, but I didn’t really tune into it. I was just skateboarding. When I took that class I got really interested in it. I’d talk to my friends about it and post stuff online. That’s how it all started.”

In true scholarly form, each board has a fleshed-out thesis related to a particular aspect of Canada’s colonial past. And, while the brand focuses on the effects of its namesake on Canada, Mike is aware of Colonialism’s global impact as well. “I think about the future generations and how I can help them understand what happened with colonialism in Canada. And it’s not just Canada. It’s everywhere. I think we can all come together and understand the history and talk about it and discuss it in safe spaces. I envision a future generation where people can understand and come together to help, and I hope that Colonialism Skateboards can help with that.”

On that note, I want to offer this as a small effort toward spreading that knowledge amongst a broader audience of skateboarders and non-skateboarders alike. Given that he has a much greater breadth of knowledge on the topic than I do, I asked Mike to explain, in his own words, what each board represents to him in the context of Canada’s indigenous histories:

“I think that this was a really great first board. The pass and permits system was implemented in parts of western Canada in the late 19th and early 20th centuries. It confined people to their reserves and made it so they needed a pass to leave. The Canadian government used it to attempt to dismantle the indigenous people of Canada’s way of governing themselves and put a huge prohibition on ceremonies and traditions. It was hugely damaging to indigenous life. There were fines if you were caught having a pow-wow, or feast, or dance, or even just praying in your own tradition. Some people were caught doing these things and taken away and never seen again.

Since it was technically illegal and the government didn’t want anyone to know about the system, it was super hard to get a hold of these images. In certain areas, it’s not long ago that these were enforced. Some of them date as recently as 1969. I got that image from the Glenbow Museum archives in Calgary.”

“There’s one quote from Sir John MacDonald, Canada’s first prime minister, who said to the House of Commons in 1883, ‘When the school is on the reserve the child lives with its parents, who are savages; he is surrounded by savages. Though he may learn to read and write he is simply a savage who can read and write. Indian children should be withdrawn as much as possible from the parental influence.’ Thus, the Residential Schools were set up by the government to take indigenous children away from their families and to assimilate them into “mainstream society.” The odds for children dying in residential schools were higher than the odds for Canadians serving in World War II. To this day there’s still a high number of indigenous children in Canada in foster care. And they’re dying at higher rates than other children. There are some residential schools that are still standing. Some people want them removed because of the horrible memories, but others want them there so we have to still acknowledge them and see what happened.

I also got that image from the Glenbow Museum archives in Calgary. One thing about the graphic—the image was super blurry—you couldn’t identify anyone in that photo. But I didn’t mind that, I wanted it that way. Some people thought that it was too lo-res but that was my point. They could have been any child in the residential system.”

“The bison was the main food source for indigenous peoples and when the plains were settled they were heavily hunted and eradicated. The bison population of North America was between 20 and 30 million. There’s less than 500,000 left. It was one of the biggest disasters to hit the grasslands: devastating for the environment, the animals and the ground. With this graphic, I wanted to show the power that the bison has. It’s just an image of a bison staring out. My homie Logan Miller did that painting. I basically used the Aesthetics endangered species graphics as a template and it evolved into its own thing. I wanted to give a nod to Aesthetics skateboards because they’re super legit—Rob Welsh, Clyde Singleton, Joey Pepper—you know. That was the sickest team and brand. I didn’t want to bite them too bad, but I wanted to pay homage to that great company.”

“This board wasn’t going to be just this photo. Originally, it was going to be a bunch of old photos, but my friend convinced me it had to be this image on a full board. It shows the devastation of what happened to the bison—huge stacks of bison bones and a two-storey house overshadowed by them. They’re stacked by train tracks ready for shipping for whatever they were going to do with them, like making medicine. I got that image from the Saskatchewan archives here in Regina. It’s such a sick image. I still get DMs from people asking me for that board.”

“Louis Riel has been my hero for a long time. He’s a leader of the Métis people of the prairies who staged two rebellions against the Canadian government, so I wanted to depict him as a hero. I wanted to bring him into the digital age so I used RZA’s Bobby Digital album as a template. I added some teepees instead of the cityscape and an Indian Agent named Hayter Reed and a guy named Edgar Dewdney—two evil guys, not very good to indigenous people—with Luis Riel in the middle looking like a hero. I put those guys on there and the eight people who were hanged in North Battleford as a result of the 1885 Riel Rebellion. There’s Sir John MacDonald, the Prime Minister with the quote about savages who also hung Riel, holding a noose, and Gabriel Dumont, another Métis leader, there in the bottom. The whole concept was pretty far out from the beginning and I didn’t know if people would be stoked on it. Once I had my mockup I gave it to Logan Miller, the guy who drew the bison board, to paint it. It turned out really awesome.”

“That board’s hung up at the First Nations University of Canada. I wanted this board to be the graphic to launch the company but it just didn’t work out that way. Before I even started Colonialism, I got a hold of James Daschuk and was like “Dude! I want to meet you, I want to talk to you about something—a skateboard company.” We got a coffee and I asked him about putting his book on the board and he was super supportive and down but it didn’t happen right away. The University of Regina Press, who published the book, got me the image and I took it from there. Hopefully people buy the book and read it based on the board and understand the history in it. Once it’s on a skateboard it’s in the streets. It’s in schools. I got an email from a teacher who had a student bring the board into school. When I heard that I was psyched. That’s exactly why I started this company.” 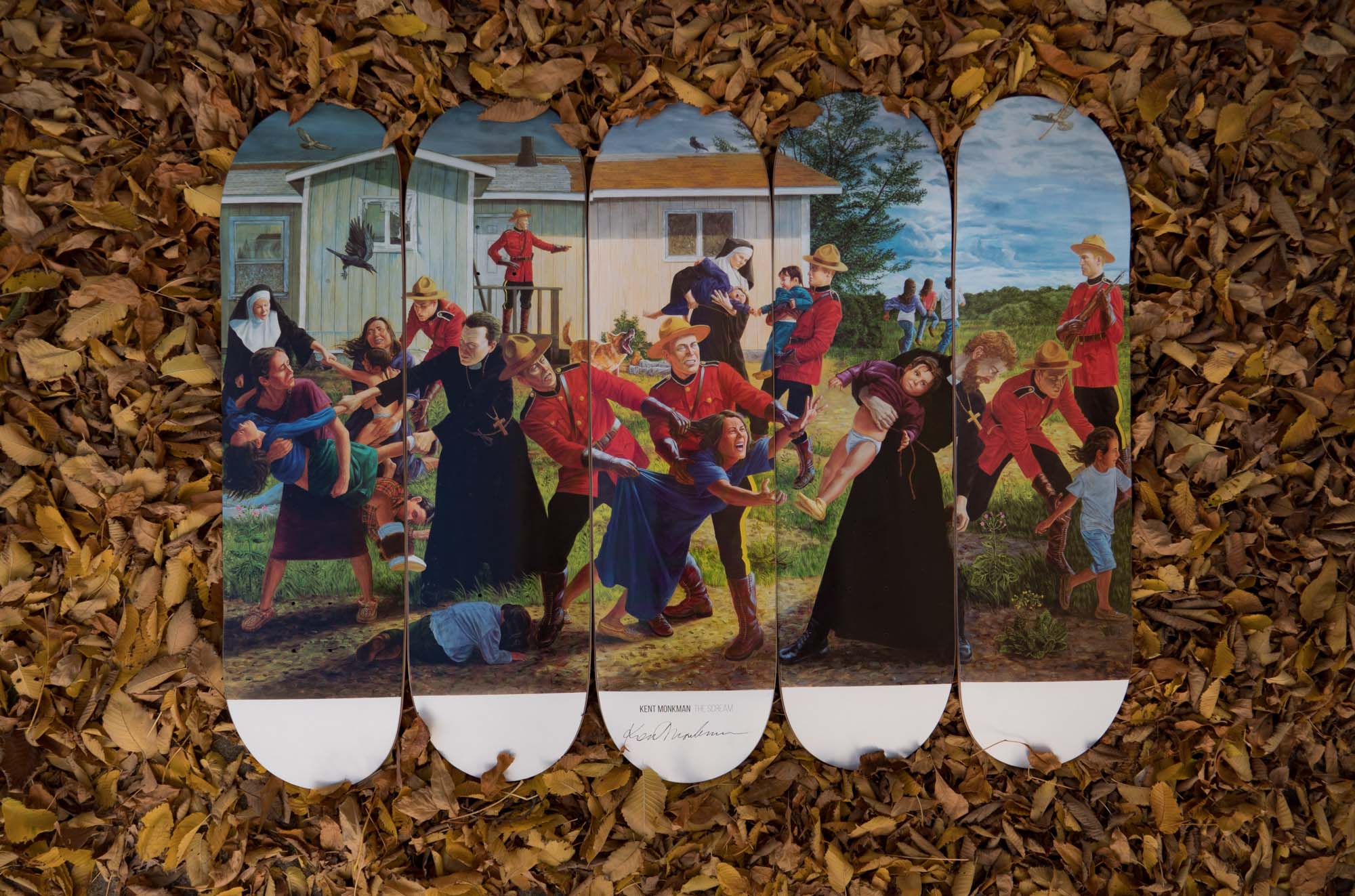 “Canada was coming up on its 150th anniversary and I wanted to release something for it. Something that would help educate people about the effects of the residential school system and colonialism. In this graphic—a painting by Kent Monkman called The Scream—you can just see colonialism. It depicts the Royal Canadian Mounted Police and the clergy who came onto the reserves and took children away to the residential schools forcefully. The image on that painting is the effects of colonialism. Kent Monkman’s artwork challenges us to think critically about our history and what Canada was doing celebrating it as it turned 150 years old.”

In general, it’s all well and good to grab your board and let the good times roll, momentarily clearing your mind of all that’s rotten and hateful. But, if we are lucky enough to use skateboarding this way, once we’ve found some personal solace we can then redirect ourselves towards a place of growth and learning. Colonialism Skateboards brings an important reminder that we can also use skateboarding as a means to engage with our history in an attempt to move closer to healing and further from our oppressive past.

Go to colonialism.ca or check finer board shops to buy Colonialism Skateboards.