Jason’s work gives him the opportunity to explore alluring, yet harsh environments while telling the stories of its local inhabitants. Trying to do away with the cliches of exploration and adventure, he creates films that highlight the tensions between the strength and fragility of the region.

His recent film Keeper of the Flame profiles friend Derrick Pottle, an Inuit hunter, carver and guide from Nunatsiavut, North Eastern Canada. The incredibly shot short tells the story of Inuit culture and provides the viewer with a deeper understanding of their way of life. We sat down with Jason to find out more. 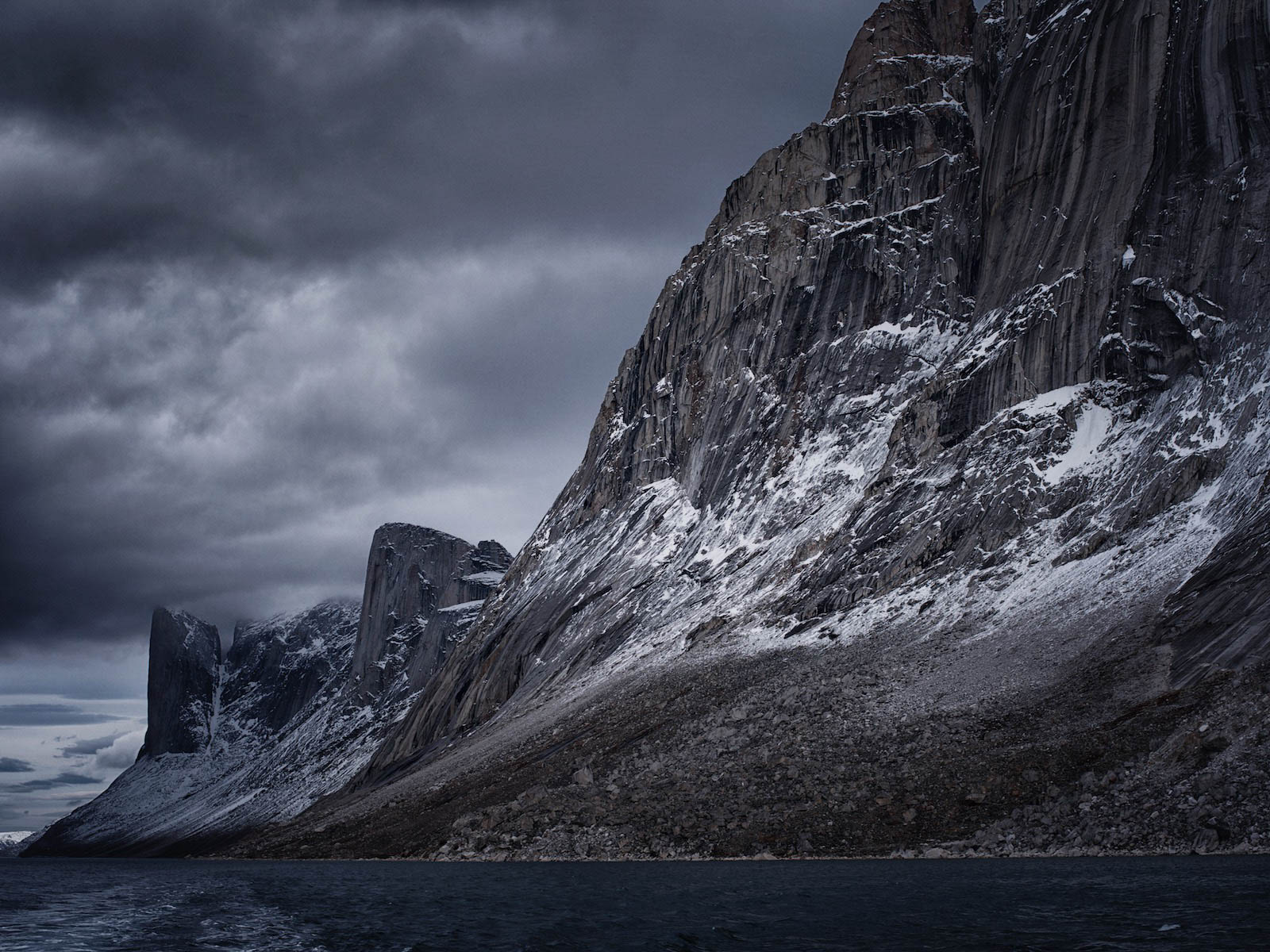 You just got back from remote Eastern Europe. What were you doing there?

I was shooting a job for Tennis Canada, spending time with an exciting new generation of Canadian players making their mark at tournaments in Croatia and Romania. I also spent a bit of time in Serbia, all for an upcoming TV campaign I’ve been working on.

Sounds like a good gig. Have you spent much time in that area before?

Yeah, I’ve been to that part of the world a number of times. I really love the mix of medieval and ancient architecture, the monolithic and austere structures from the Soviet era and the more recent hyper-modern infrastructure. It provides some very graphic locations to work with.

Tell me a bit about yourself, where did you grow up?

I’m Canadian and grew up between Canada and Holland. My mother was a photographer and I was exposed to visual arts from a young age, although I have no formal training. I tend to seek out fresh professional challenges every few years and came to film after a few other exciting, unrelated career paths.

What kind of careers?

I spent some time working around the world in international development, then in military logistics in places like Iraq, Afghanistan and Sudan. I ran a production business and dabbled in clean tech. Now I make my living as a commercial and documentary director and fine art photographer. Most of my time is spent in the Arctic and some of the world’s toughest places; they are where I find the richest material and what I find are the most compelling landscapes. I’ve been working with Canada’s national tourism board, some high-end tourism operators, and NASA—they’re all interested in telling truthful stories and tackling some of the biggest issues of our time. In many cases, I’m lucky to get paid to tell the stories that I find intellectually compelling and important.

Your film Keeper of the Flame is set in Nunatsiavut, Labrador. Can you tell me about that area?

Nunatsiavut is geographically part of the province of Newfoundland and Labrador, the northeastern tip of Canada’s maritime provinces. It has an Arctic and sub-Arctic climate and as of 2005, it has been an autonomous region claimed by its Inuit residents. The focus for them is the preservation of Inuit language and culture and stewardship of the environment. I am not from the area, and don’t claim to be an expert on the subject, but have enjoyed spending time on the land and meeting the people who call it home. Nunatsiavut means “Our Beautiful Land” and that speaks to a really significant part of my connection to it. I am forever drawn to the beauty, the light and the cultures of our Arctic lands. I have a number of friends who live in the region, including Derrick. It’s been a privilege to spend time on the land with them and travel through various parts of the area. 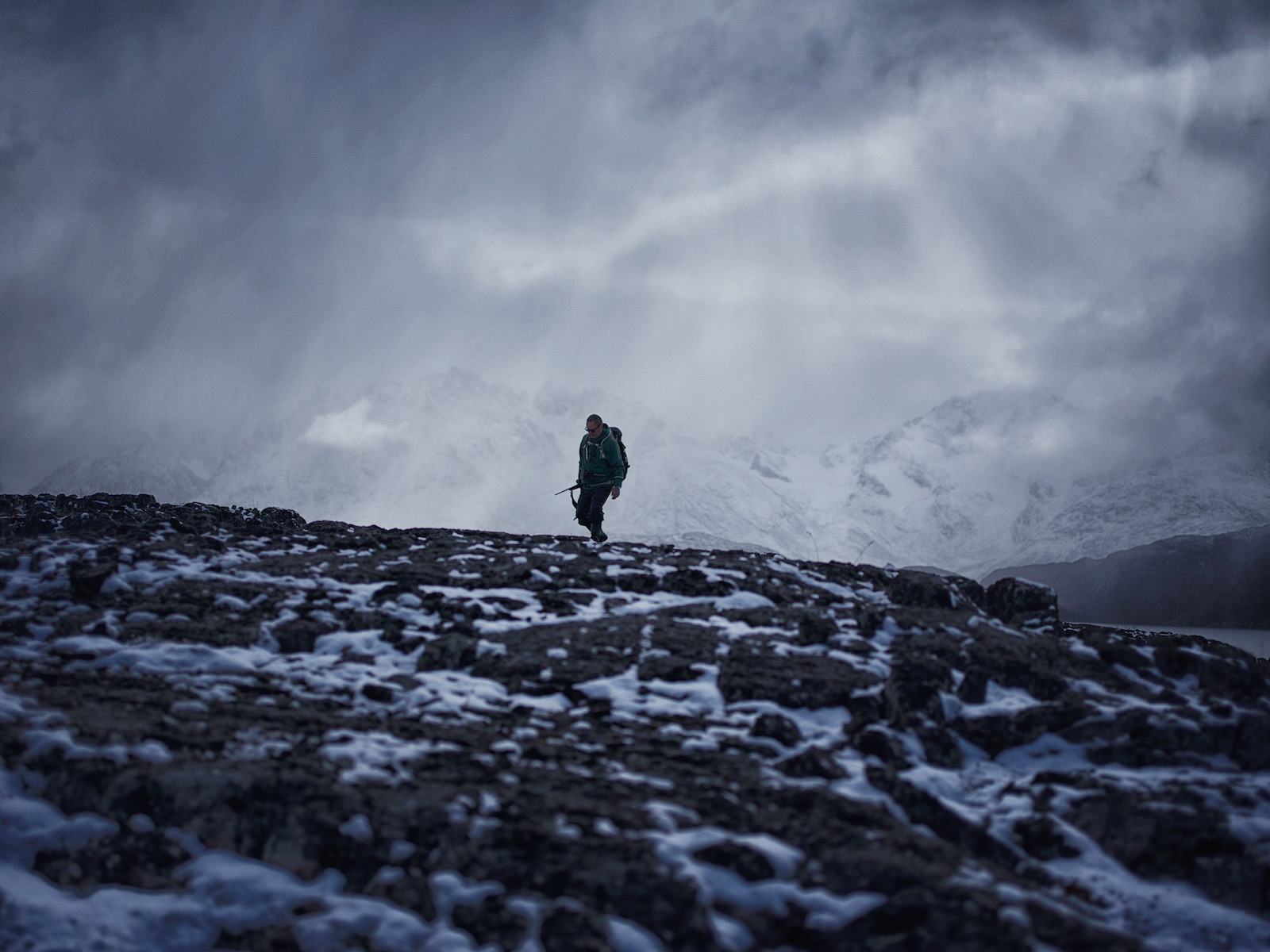 How do you know Derrick?

Derrick and I met aboard an expedition tourism vessel a few years back. Derrick works seasonally as a bear guard and culturalist for a great company called Adventure Canada. They are a family run business that leads groups through various parts of the Arctic using ship-based expedition travel as a means of connecting with very remote areas and communities. I was hired by the company to make a series of films. Derrick and I spoke to each other of our love for the lands we were visiting, our concerns and our shared ambition around what the future of the Arctic could hold. I wanted to make a film and share some of his insights and experiences with others.

He seems like a strong character, can you tell me a bit more about him?

Derrick is a modest person and a man of few words. I didn’t really know much about his reputation as a carver until someone else told me about his proficiency. He’s represented by a very well respected gallery and his work has shown around the country and internationally, but he’d never tell you that. He is also a legendary hunter, a cultural ambassador and was a member of the steering committee that founded the Torngat Mountains National Park, one of our most famous and largest national parks. 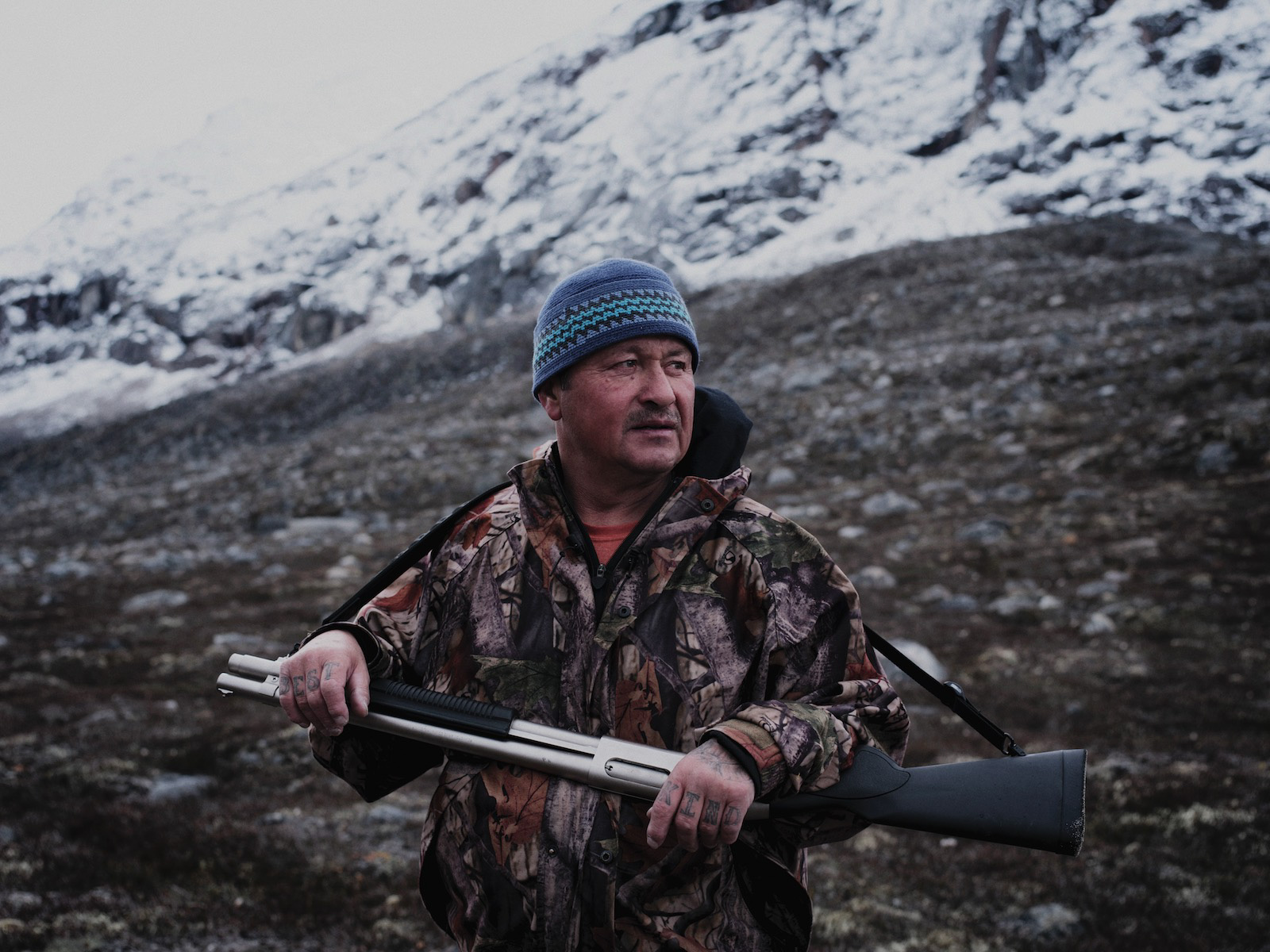 Inuit culture seems strong in Labrador. The break from Newfoundland would have played a big part, but what is it about the Inuit people there that maintain such richness in society?

There is great pride and resilience in the Inuit culture in Nunatsiavut. I see a great concern with maintaining the cultural and geographical integrity of their homeland. This is informed, in part, by a long history of cultural suppression and some very tragic incidents. I am mindful of my role as a visitor and a guest in Inuit homelands and for that reason, I’m reluctant to make any assumptions about Inuit culture. What I can say is that I am very impressed by how I have witnessed my friends and acquaintance react to adversity and how they have continued to move ahead in a way that honours the ancient traditions and culture of their people.

The film is beautifully shot, what gear did you use?

We shot this piece on my RED Helium Weapon. It’s an 8K camera with great dynamic range, frame rate options and a light carbon fibre body. Mostly I used Zeiss Aspherical lenses for this spot. I wanted a camera package that was light and nimble and could deal with the cold and inclement weather. My team and I are pretty accustomed to filming in some of the harshest conditions on earth. Experience has forced us to develop a shorthand for choosing the right gear for these jobs, as well as using some pretty unconventional workarounds when it comes to keeping that gear working way off the grid. 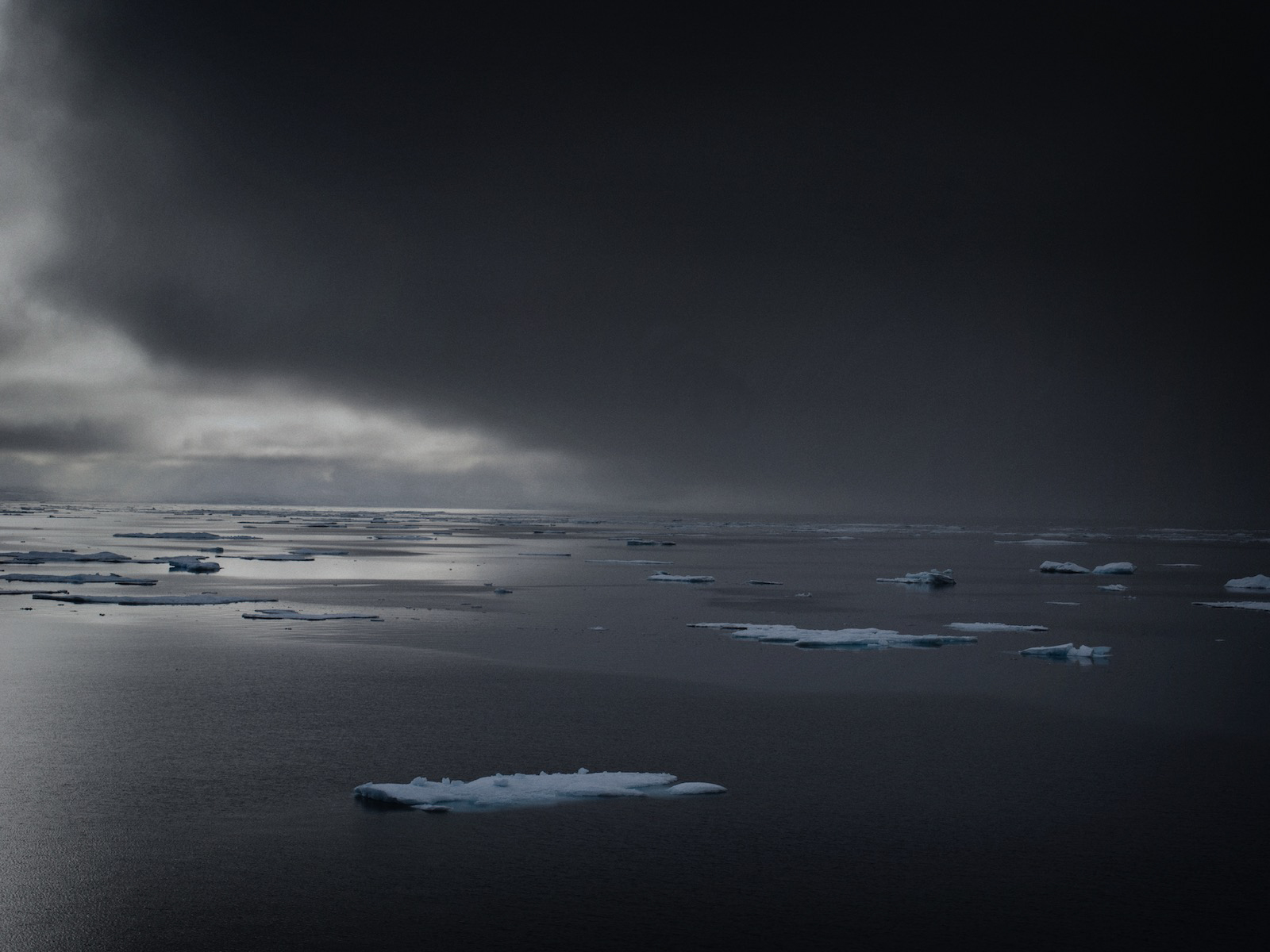 You went as far as Greenland to shoot this. Did you have the direction locked down from the start, or did it evolve as you went?

We were meant to be on a set schedule, more or less. We’re really at the mercy of the air charters and ship schedule of the vessel we were on. The reality of Arctic travel is that itineraries constantly change. The density and position of sea ice, snowfall, inclement weather and other factors require constant flexibility and adjustment. We were able to rely on a very strong expedition team to consistently put us into places that allowed for rich experiences and great visuals. Within those broader environments, it’s my job to find the best light in which to place my subject. There were a few locations I was very keen on that we, unfortunately, did not get to and a few locations I was able to visit for the very first time on this trip.

And finally, what are you working on for the year ahead?

Three weeks ago I was shooting a helicopter job in the Northern Yukon, filming herds of caribou near the Alaskan border for a Canadian commercial. It was an incredibly remote region, and the temperatures were shockingly cold on some days. I travelled from there directly to Eastern Europe. I’ve got a few jobs in edit and am also working on a longer version of the piece about Derrick to put into the film festival circuit. In the coming months, I’ll be shooting projects out of Toronto for a while, so I can spend time with my family before heading to Central America and then back to the north in the late summer, if not sooner. 2018 is shaping up to be a stellar year.

Enjoy the film and for more of Jason’s work, head to his website or Vimeo.