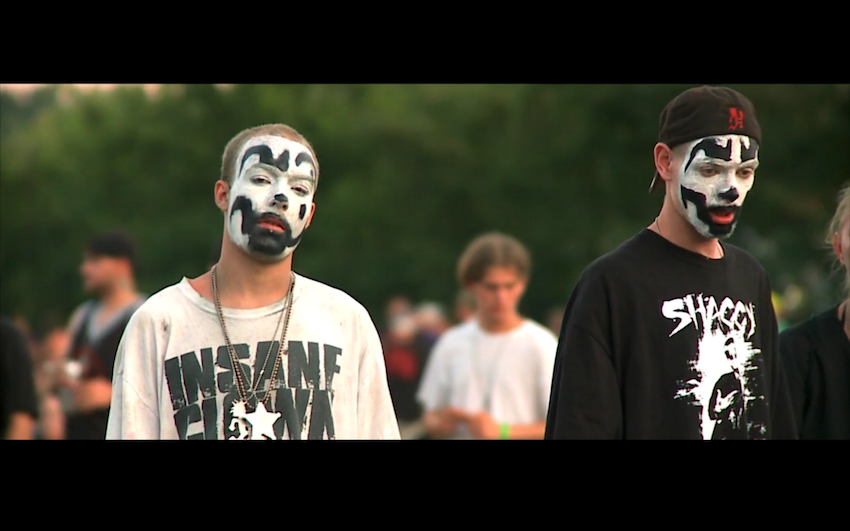 Sean Dunne’s documentaries aren’t necessarily easy to watch, but damn they hit you right between the eyeballs.

Humble people suck. Which is why I’m not one of them. I’ll text you every time I’ve successfully pulled off a reverse parallel park and I’ll keep staring at you eating, until I hear my cooking is great, fab, how’d you make this? So when I chatted with filmmaker Sean Dunne it was really confusing when not once, did he mention how shit hot his films were. And they are.

After watching his short film American Juggalo, I was on my hands and knees praying to the binge viewing Gods that he had more, and he did. Some of his films include Oxyana: a feature length about the prescription pill epidemic in a poor coal mining town, Florida Man: a collection of stories from drifters in Florida, and Cam Girlz: about the women who are earning a living performing on webcams. It’s confronting, challenging, and hopelessly moreish content.

The films you do are pretty far removed from everyday New York life. When you go out to these places does it scare the shit out of you?

Less and less I’m scared shitless, but when I was making American Juggalo and Oxyana I discovered that marijuana makes me feel a lot more comfortable in these situations, and I think it’s coming across in my films. Now, I’m deliberately putting myself in situations where I’m challenging myself, like the Trump rally we just did.

I had to go there, I was like, “These people exist, I can pretend like they don’t, but they do.” And it made me feel extremely uncomfortable. But I smoked a little weed and just went in there and I was immediately filled with empathy, and I thought, “Oh my god, these are just people.”

I go into these things probably because I had some silly judgement. The whole reason that we went to the gathering of the Juggalos was because there was a lot of negativity surrounding them, and I was buying into it one way or another. I thought, “Ooh it’d be so scary to go there.” That film in particular is a really good example because it started to create the archetype of what the rest of my films are. Let’s put the audience in these wild situations and see how they react.

There’s some crazy stuff going on at the Juggalos gathering. What was the weirdest?

On our last night there I remember seeing this terrified kid, forcibly get a lap dance from this Juggalette while his Dad and creepy uncle sat there laughing their asses off. This kid was totally traumatised by it and it was just really weird and disturbing. I kinda wanted to run over there and be like “Yo leave him alone man, he’s gonna have sexual hangups the rest of his life because of this situation!” And his dad and the uncle are throwing money around and we stood there like, “Man this is a scene out here.”

How does someone from Brooklyn come across a small town in West Virginia, which ended up being the whole focus of Oxyana?

Shortly after the Juggalo’s film I was on a road trip with a country singer friend of mine, Jonny Fritz, who I’d actually made a film about called Stray Dawg. He showed me this small town, Oceana, and it had a very dark feeling, like there was a dark cloud over the town.

There were a lot of hitchhikers, a lot of people that were really down and out. It felt very charged, and not in good way. We saw some Juggalos standing on a corner and I was like “I know how to talk to them,” and I went up to him and he said, “I’ll tell you the real deal about this town, everyone’s on dope, and they call us Oxyana.”

And I was like holy shit, then five minutes later he was shooting up right in front of us. Unfortunately, the thing with that film is that it’s even more relevant now, than it was when we were making it. There’s more towns like that then ever.

The way we handle it in this country is we throw you in jail and shame you and label you a criminal, and there’s only one thing worse than being labelled a drug addict in our society and it’s being labelled a criminal. So it’s all fucked up…I really feel like my anti-drug war stance is there, because it’s so obvious that we’ve created this issue and we can do something about it.

People were so open with you, letting you into their homes, even shooting up in front of you… it seemed strange to me because usually in small country towns like that people are really guarded…

That film taught me more than the others, that you get what you give. If I’m open and can relate, I mean, my Dad struggles with the very same issue that they do, so this stuff is close to my heart. I think people can feel that. If I came with any hesitation or tension and thought, “Are these people are gonna rob me?” then that’s all I’d get in return. “Oh you wanna look at us like weirdos? Well, we’ll fucking treat you like you’re one then.” Audiences can sense that disconnect in movies.

You can’t change the landscape but you can change the lens, and that’s what I’ve being trying to do with these subjects that are so generous to let us in on their stories. That’s honestly been, straight up fucking psychedelic, and that was before I even started taking acid and mushrooms. Anytime I’m judging something there’s something wrong with me, that’s my dirt on the lens.

That’s a pretty cool mindset to have, especially going into your Trump Rally film. I think a lot of people would find it impossible to maintain that open perspective there.

Well I could’ve done that, I could’ve pandered to the audience and gone ha ha look at these doofuses. I just walked in there and all I saw was a whole bunch of people, who are slightly confused, and chronically misled. I’m not scared Mexicans are gonna rape me, or whatever it is that everyone’s so charged up about.

With your movie Cam Girlz, I had a completely different opinion about the girls once I’d finished watching…how did you even find them?

I was probably a lot like you, I had a way different feeling about this before and after filming. I hate to say it but maybe I was a bit of a closet ‘slut shamer,’ like “Oh no you’re being promiscuous that’s a bad thing,” or whatever… but the more I got to know them, the more I found them to be the most intelligent, empowered women I’ve ever come across in my entire life, in any field.

They’re not just going to some cubicle job every day and typing in fucking excel spreadsheets, they’re creating, marketing and distributing their own work, a lot like I am. They definitely earned my respect. Like the lady with the kid? Even when we signed her up to do it, I was like, “Oh my god she’s gonna let her kid be on camera?” Then I got there and this kid’s being raised in such a loving household because she can be at home, and she can make a living by doing this thing for three-or-four hours a night after he goes to bed.

With Cam Girlz, was it weird for you, filming while they cammed?

I made the decision not to shoot on camera interviews. So basically there’s two films going on, there’s this vérité stuff about their lives, and then audio only interviews with every girl. That was a ploy to get their true selves not their cam personalities, to get what I call their ‘midnight voice,’ that, chilled out with a friend voice, where I’d sit down with them in their actual setting and have a long conversation with them.

Florida Man was the result of a really creatively productive mushroom trip. Me, my producer and cinematographer took mushrooms together and I’d already had the idea to go there. At the tail end of that mushroom trip, as the sun was coming up over Brooklyn and we were on my roof, like, “We gotta go down to Florida and do this thing, we’re in such a loving place, let’s put that energy out there.”

We went down there for ten days with zero agenda and we would work in two shifts. 4pm-9pm, then we’d go home, smoke some blunts and fucking chill, then go back out midnight till 4am. We’d go to a parking lot, take out our camera and boom mike, and people would come up to us, or we’d see someone interesting and we’d ask, “Hey, any words of wisdom?”

They’d start telling stories and we’d hang out and it was so loose and funny, they’re such natural story tellers. Half the guys are drifters and there was a lot of wisdom and humour that we tapped into.

Which film has been the most intense for you?

Oxyana. For sure. I wake up thinking about those people every day. Maybe it’s because I’ve seen my Dad continue to struggle with this stuff, so it’s very real and in my face on a daily basis. This illness doesn’t discriminate, and a lot of people are out there struggling and suffering. I think seeing my Dad go through this, keeps them fresh in my mind and in my heart all the time. I kind of have to confront that constantly.

The next bigger project is about psychedelics, and it just seems like the next obvious step, it’s just such a big part of my world right now. It’s gonna be a difficult thing to grasp because it’s such a personal thing. But it’s a challenge and I like it.

See more of Sean’s work for free here or chuck him a follow on Twitter at @SeanVeryApe.