“I love being alive.”

It’s not a declaration you expect to hear come from the mouth of a man who has been cut down in his creative and physical prime by a degenerative disease. A disease which will, bit by bit, render the body the unable to move, speak, or even breathe without assistance.

But that’s exactly what Simon Fitzmaurice says, and he means it. Or rather, what Colin Farrell says, who narrates Simon’s words in the heart-wrenching documentary It’s Not Yet Dark. Father, husband and Irish filmmaker Simon no longer has possession of his once boisterous voice; just one of the many unfair things that Motor Neuron Disease (also known as ALS or Lou Gehrig’s Disease), has slowly taken from him.

What was left with Simon was a devoted family, friends, an eye tracking computer system that would allow him to communicate, and the determination to not just exist, but to do something with his final years on earth. Knowing that his body would tragically deteriorate while his mind remained as it was, he wrote a book about his life and directed his first ever feature film titled My Name Is Emily (currently doing the rounds at festivals across the world at the same time as this very documentary). And, he did it using only his eyes.

Thanks to the film’s ability to walk the line between utter devastation and uncompromising determination, you’ll spend a good portion of it with tears running down your face, but don’t be deterred—it’s one of the most moving documentaries you’ll see this year. We caught up with the director of It’s Not Yet Dark, Frankie Fenton, to find out how he managed to piece together such a poignant visual of one remarkable human. 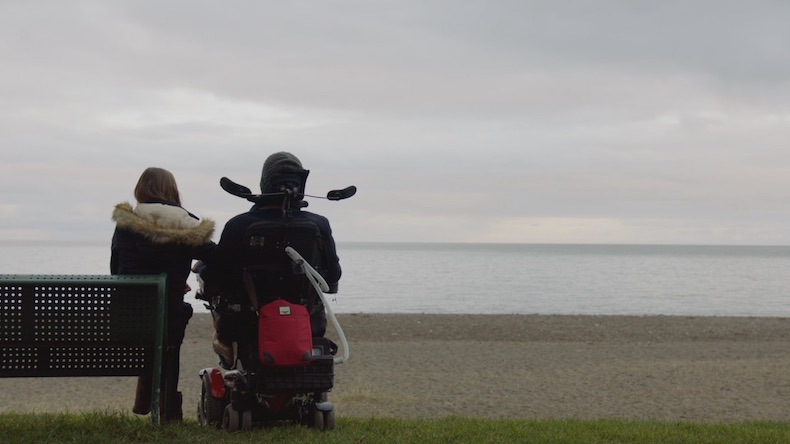 Why do you think you were chosen to direct this film?

I was originally approached by producer Kathryn Kennedy to help out on a crowd-funding appeal for Simon’s film My Name is Emily. I had in fact grown up with Ruth (Simon’s wife) in our small hometown of Ardee, Co. Louth in Ireland. Being a director myself, producers Kathryn Kennedy and Lesley McKimm asked me to make a small promo of what I thought would make a good direction for the film. So I did and the rest is history. I think the fact that Simon and Ruth knew me made it that little bit easier to trust what it was we were finally going to create.

I read that your initial idea for the film was quite different to the end product, in that you got hold of the home videos and also the autobiography at a very late stage. Can you explain how this changed things for you and the film?

The book didn’t come about for quite some time, but when it did it was pretty obvious to us all that it needed to form the spine of the story. Every line in the film apart from interviews with his friends and family is from Simon himself.  Nobody says it better than Simon and this incredible book was something of a gift for us while planning a film about him. The biggest problem was that we only had about 15 seconds of footage of Simon before MND took a hold on his movement, therefore my focus was on using the filming of My Name Is Emily as the main story. 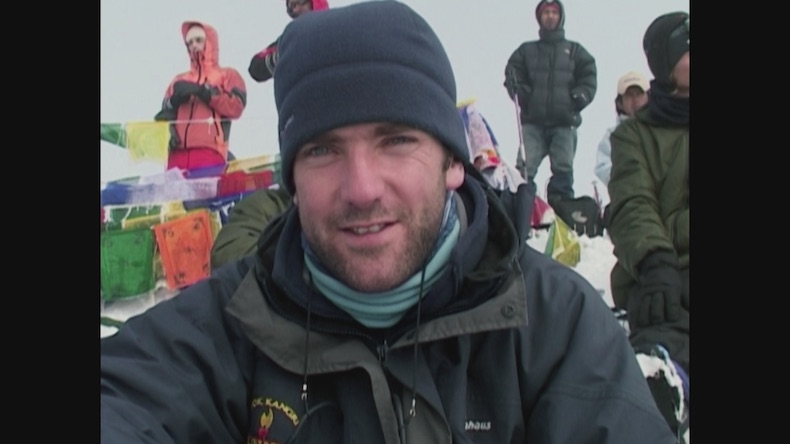 However, one week into the edit Simon asked us to pick up a hard drive from his house. It contained 10 years’ worth of home footage from that entire period. So this meant that we had the story, and the footage to go with it. Apart from that, I just needed to be creative with visually representing his thought processes. In my original pitch promo I had used drone footage moving fast through the desert. I had envisaged Dali-esque landscapes to represent Simon’s mind, but this eventually turned into the still, green, misty landscape of Ireland, as this is where he is from. Visually I felt Ireland personified Simon’s writing better than any surrealist panorama.

How do you strike that balance between being realistic about the sadness of this disease, and the positivity of him and his family to enjoy life as much as they can?

For me, I think the only way to go about this film it is to sideline the idea of realistic positivity and realistic negativity and embrace the idea of living and dying. With MND there are no right or wrong choices. It’s very different for each person who gets it. It’s not about talking about the disease, the fetishizing of the personal details, the how he gets dressed or eats. It’s also not about applauding Simon for the sake of applauding, but rather about telling Simon and Ruth’s individual story. Their story just so happens to be the one we told. They are both such incredible people that have a magical way at looking at their place in the universe. It just so happens that their story contains those elements from which life can be enjoyed. In this way I hope we made something a little different. 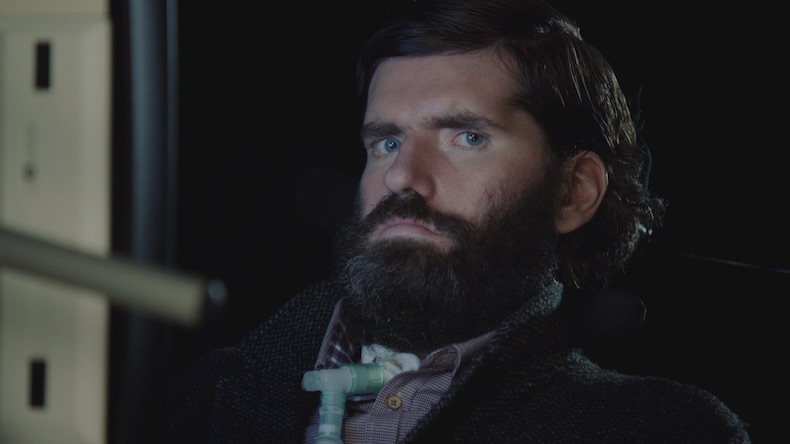 What made you decide to use Colin Farrell as a voiceover, instead of Simon’s computer generated voice?

I had been playing around with different modes of telling the story. At one point I was only going to rely on interviews and use a fly on the wall approach, however, when his book appeared we had an opportunity to use Simon’s amazing words, accentuated so beautifully for all to hear. Simon’s voice, before he lost it, really was something special and I wanted to be able to use the emphasis, intensity, and weight he used before MND to articulate every bit of passion that he has. Simon agreed and even wrote to Colin to see if this would be something he might be interested in. Colin was incredibly adept at picking up exactly what we were trying to do. It was a brave direction, but it seemed to work. It also helped that both Simon’s and Colin’s accents are unquestionably very closely aligned. Simon and Ruth later told us that his Mom, on watching an early screening, kept on forgetting that she was listening to Colin Farrell and not her own son.

What was it like being on set of My Name is Emily, watching Simon essentially direct a movie with his eyes?

It was monumental, inspiring, just colossal. No other human has done this. And I was privileged to sit there and shoot it as it happened. My hat comes off to Lesley McKimm and Kathryn Kennedy, the producers of the film too. They compiled an incredible team that helped Simon get over the line. It’s tough enough to shoot a film, but to do what Simon did is something so astonishing I find it difficult to find the words. When they were planning the shoot they thought maybe he might do five hours a day… maybe. But from day one he was on set for 12 hour a day, then emailing from home, well after dark to all heads of departments, to his crew, and of course his actors, to make up the time he lost from his communication speeds on set. It was something really very special and I really treasure that time in my heart. 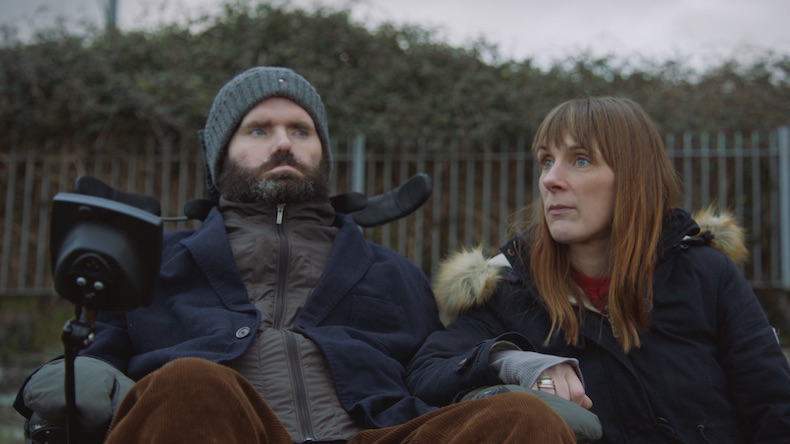 They seem like a really incredible family. What was it like to get the tick of approval from them after so much work?

Like nothing else. It’s always going to be scary whether or not your subjects are happy with the end product, but to get that warm reaction from them all was really something special. They were all so kind enough to allow us to put their thoughts and innermost feelings up on the big screen for all to see, and that’s a very brave thing to do. Ruth thanked us for having made such a nice document for their kids to appreciate when they get older. Simon said that he “wouldn’t change a thing.” I can’t think of two higher compliments we could have wished for.

Was there a scene in particular that really struck an emotional chord with you?

Without trying to give too much away, I really like the part where they move to Australia. But for me, it’s the completion of My Name Is Emily. There was a lot of tears on set. It still amazes me to think that he really achieved it, like that feeling of getting to the top of a mountain. Watching it now, although it dissipates with time, I still get that same butterflies feeling from what took place that day.

Were there any particular moments during filming where Simon’s determination or spirit really blew you away?

Honestly, without a shadow of a doubt, every moment Simon was working was incredible. The sheer concentration and drive in him is unreal. Puddles of water, stormy winds and rain pouring into a makeshift tent, splashing his monitor. He didn’t bat an eyelid, just got on with it. That was something else. Maybe one day we’ll make The Making Of  My Name Is Emily so that you can see it in more detail for yourself.

Find out where It’s Not Yet Dark is currently showing here.