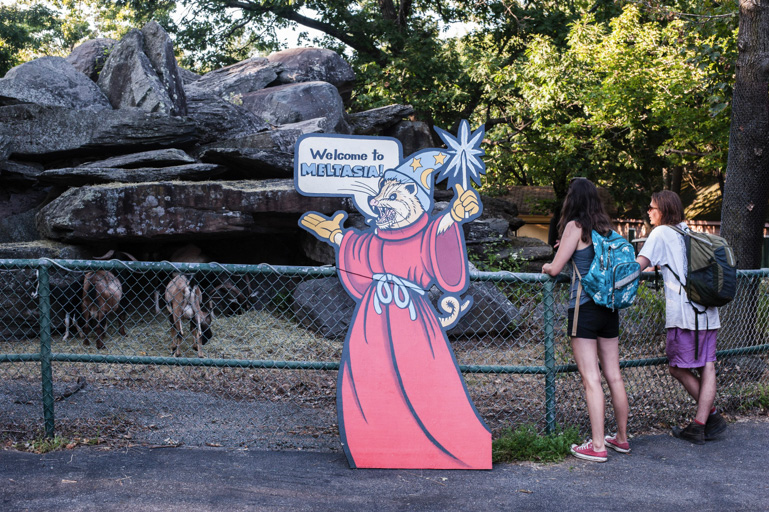 Photography by Alec Castillo / Words by Connor Mikita, both of the band The Nude Party

Enter Meltasia, a festival that shuns advertising whilst celebrating rock and roll.

It certainly seems far-fetched to strip enlightenment from what could be seen as merely a bunch of strange people camping, dancing, taking drugs, and listening to music. My point isn’t to convince you that this musical gathering had a grander meaning that some may never be in tune with. The current climate of music festivals is hardly original or exciting and resembles many of the capitalist ideals people originally congregated to protest in Woodstock many years prior to this gathering. One glance at a colorful festival lineup announcement often triggers visions of clever marketing men speaking about “targeting millenials” as if they’re attempting to trap wild game. In most cases, they are.

Meltasia Music Festival was delightfully resistant to this stale structure, with the entire shindig taking place in an abandoned zoo in the Catskill Mountains of New York. The serene rural landscape leading up the old zoo was the perfect disguise for the chaos that would ensue when guests arrived. All attendees pitched tents in an assortment of retired animal cages throughout the grounds, allowing for the intermingling of artists and festival goers alike.

Distinguished by the eclectic lineup accrued through the festival’s aptly named presenter, Andy Animal, each and every band displayed their own unique piece of the rock and roll puzzle. Established acts like Fat White Family, Shannon and the Clams, Pentagram, Natural Child, and Kool Keith shared a singular stage at the core of the grounds with burgeoning punks like The Mystery Lights, Birdcloud, and Surfbort. Surprise guests Daddy Long Legs erupted into a set within a reptile cage that shielded them from a Road Housesque barrage of half-full beers. Security scrambled to stifle the attempts of humans climbing the cages wiring as the bands’s primitive blues fueled the flame.

Perhaps the pivotal moment of pandemonium came to a head when England’s Fat White Family took the stage. Conveniently placed as one of the last acts of the entire festival, there was a rising feeling that the stage would self-implode at any given moment during their set. The cult following and mythical presence they’ve built was reassured as an absolute wall of evil sonic energy emitted from their instruments. More beers were launched than ever before, casually ricocheting off the electrical sound systems that dictated the survival of the entire festival. For the first time during the entire weekend, the sound engineer reached a point of panic as the band barked commands at him over a violently thrashing crowd. Perhaps the most symbolic moment of the entire festival occurred as an American flag was thrown on to the stage. Lias, the band’s lead singer, reacted by picking the flag up and using it to wipe his ass before tossing it back at a roaring crowd member who quickly wrapped himself in it. There’s a metaphor there somewhere.

Reflecting on the festival, I now realize the lesson I took away from the weekend. While enlightenment might be too powerful of a word, for a few days the ambiguous spirit of rock and roll was brought to life in a spot that hadn’t seen actual life in decades. Through a grass roots effort of extremely dedicated staff, bands, and fans alike, a rejuvenated sense of camaraderie in the very purpose of musical expression echoed throughout the zoo. In an age where many forces seem to be working against the idea of making music, it’s essential that those who’ve remained loyal and intimate to the sacredness of music’s charm continue to not lose hope. Rock and roll will never die.