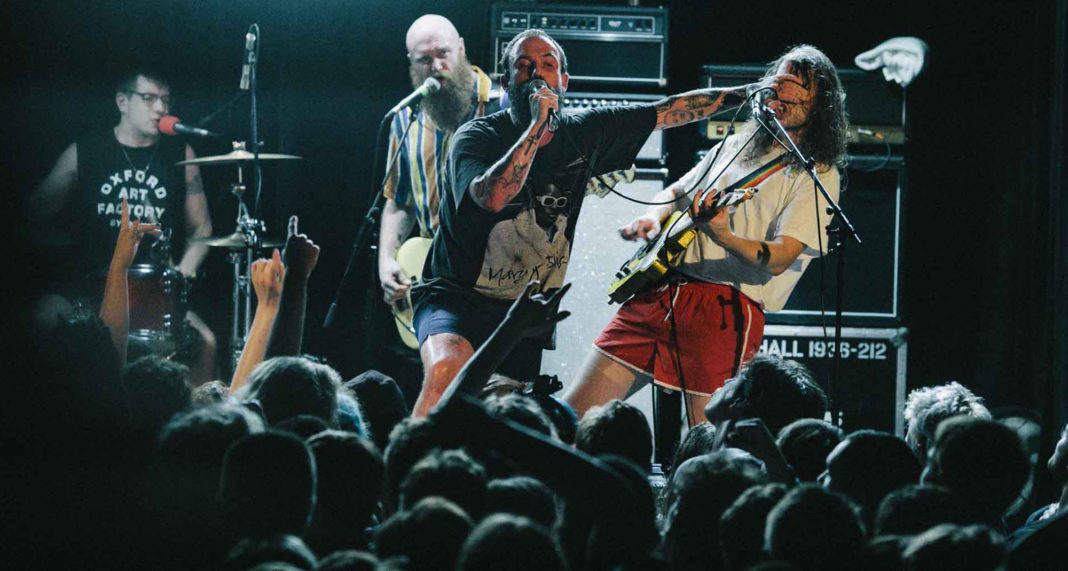 Live music has such a unique ability to unite an otherwise divided group of people. Never have I seen a more powerful example of this than at the Idles show on Monday night.

The first thing I notice when I arrive at Oxford Arts Factory for the UK punk band’s first Sydney show is the ratio of male to female attendees. Roughly estimating, I’d say the crowd is 70% male. Who cares? Well, for starters, Idles do. Before you get on your Gillette-boycotting-ball-bashing-high-horse (yep, you already mentioned that you’re hung like one too), Idles aren’t bummed that they have so many dudes as fans. I’m not either. But they are aware of it, and what they are doing with their platform and influence is what makes them so worthy of all the gross praise I’m about to heap on them. 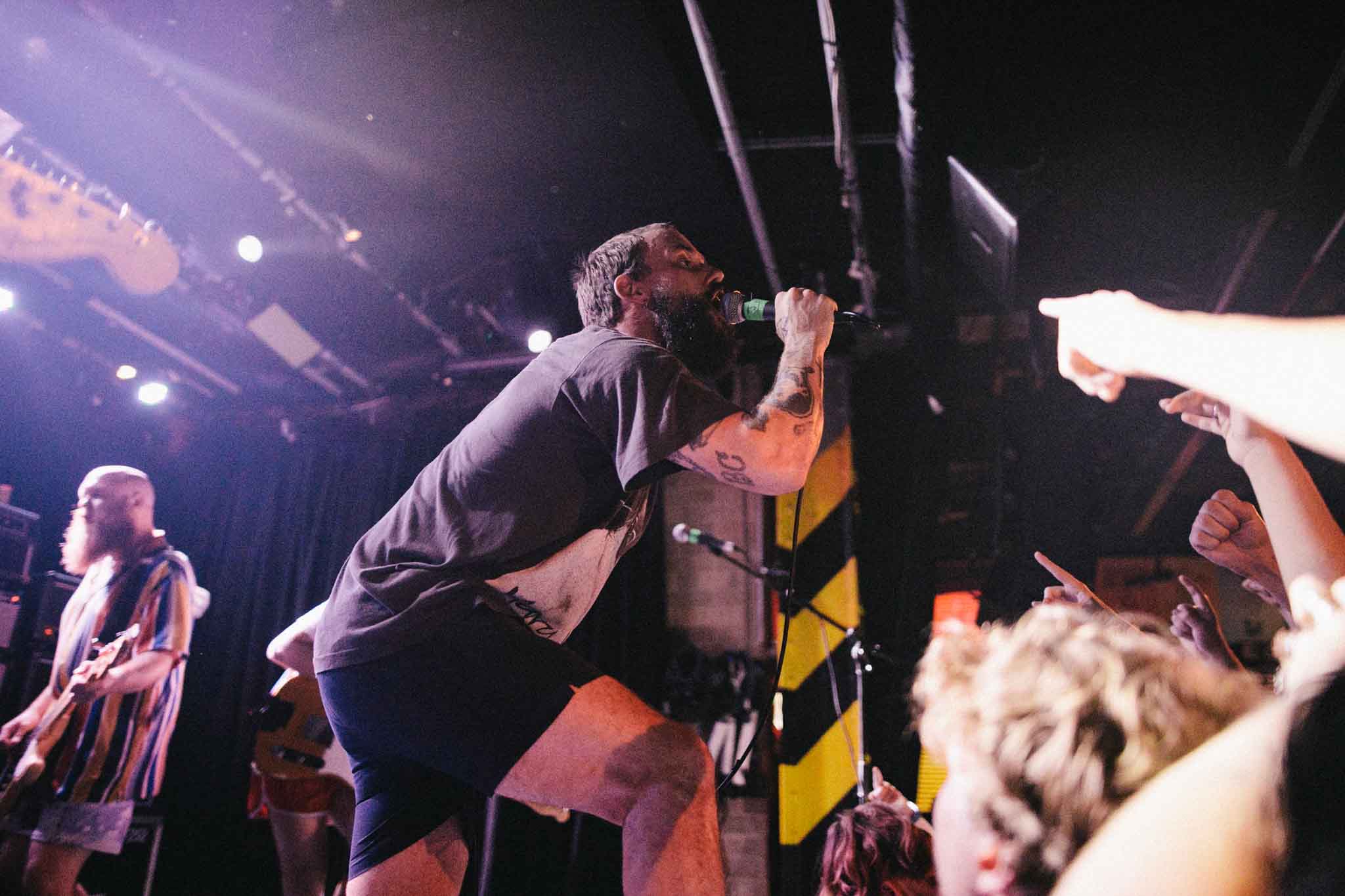 Historically speaking, punk music has bred a scene that champions violence, disrespect, sexism, and xenophobia. Throughout the years, there have been a bunch of punk bands that have challenged this kind of behaviour—like Fugazi—and now it’s Idles’ turn to lead this generation of punks into a new dawn; one where women don’t have to fear being assaulted and men don’t have to fear their own feelings.

Within three minutes of taking to the stage, Idle’s frontman, Joe Talbot, is already teaching the unruly crowd a lesson in moshpit etiquette. ‘Be kind to each other, look after each other, and respect each other’s personal space,’ he says. It’s the first of many attempts he makes to ensure the safety and comfort of everyone around him.

As a woman who loves punk music, but has never felt truly welcome in the boy’s club, I can’t tell you how cool it feels to hear the singer of my favourite punk band introduce a song by screaming, ‘I am a feminist!’ before launching into the lyrics ‘My mother worked 17 hours, 7 days a week,’ as a bunch of sweaty guys in the moshpit sing along in unison. But it is really.fucking.cool. 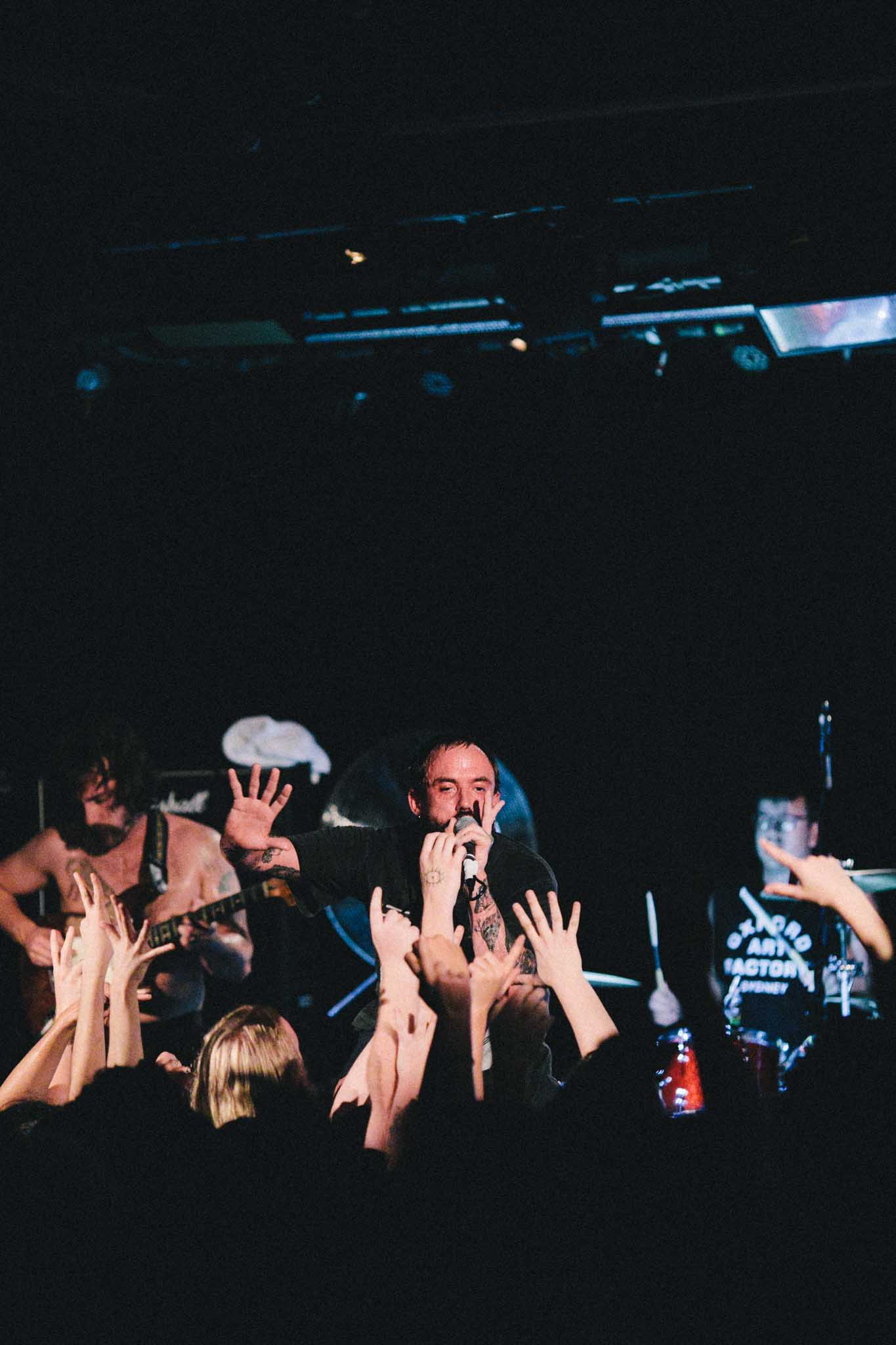 It’s worth mentioning that last year, with the release of Idles’ second album, Joy As An Act of Resistance, Talbot spent most of his press interviews talking about grief, sobriety, anger, and the value of therapy. In almost every interview, he spoke about toxic masculinity and the importance of men learning to talk about their feelings. His message obviously struck a chord with a lot of listeners in Australia, and it’s during the song ‘Samaritans’ that the importance of a man like Talbot fronting a band like Idles really hits me. As Talbot sings the lyrics, ‘The mask of masculinity is a mask that’s wearing me…This is why you never see your father cry,’ a sea of fists punch the air instead of each other. It’s so powerful, I actually feel like one of those punches has somehow found its way to my guts. 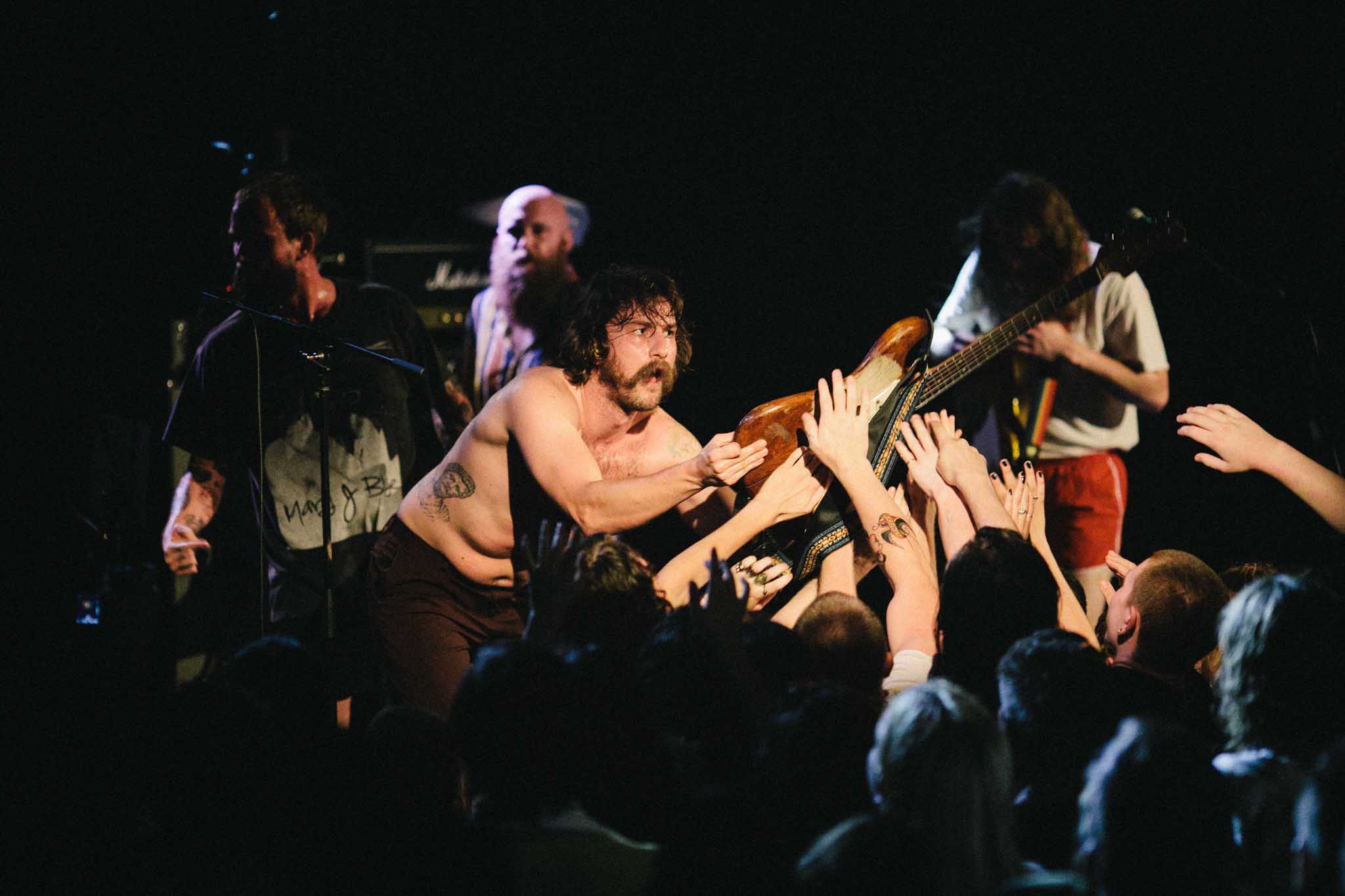 I think Talbot resonates so much with young men because he’s far from perfect himself. He’s honest about his past mistakes, and makes no excuses. He’s well built, heavily tattooed, swears like a sailor, and even shows traces of the aggression he’s campaigning against. During the show, there are a few wisecracks at the expense of some members of the audience—’I just saw you throw water on the stage, don’t do it again, because fucking electrics, ding-dong’—and more than a couple of not-so-friendly shoves against some unruly men who try to jump up on stage. But even in those moments, you can tell he’s actively working through them. Moments after he shoves, he finds the same men in the crowd, shakes their hand, kisses them on the cheek. The therapy is obviously working. 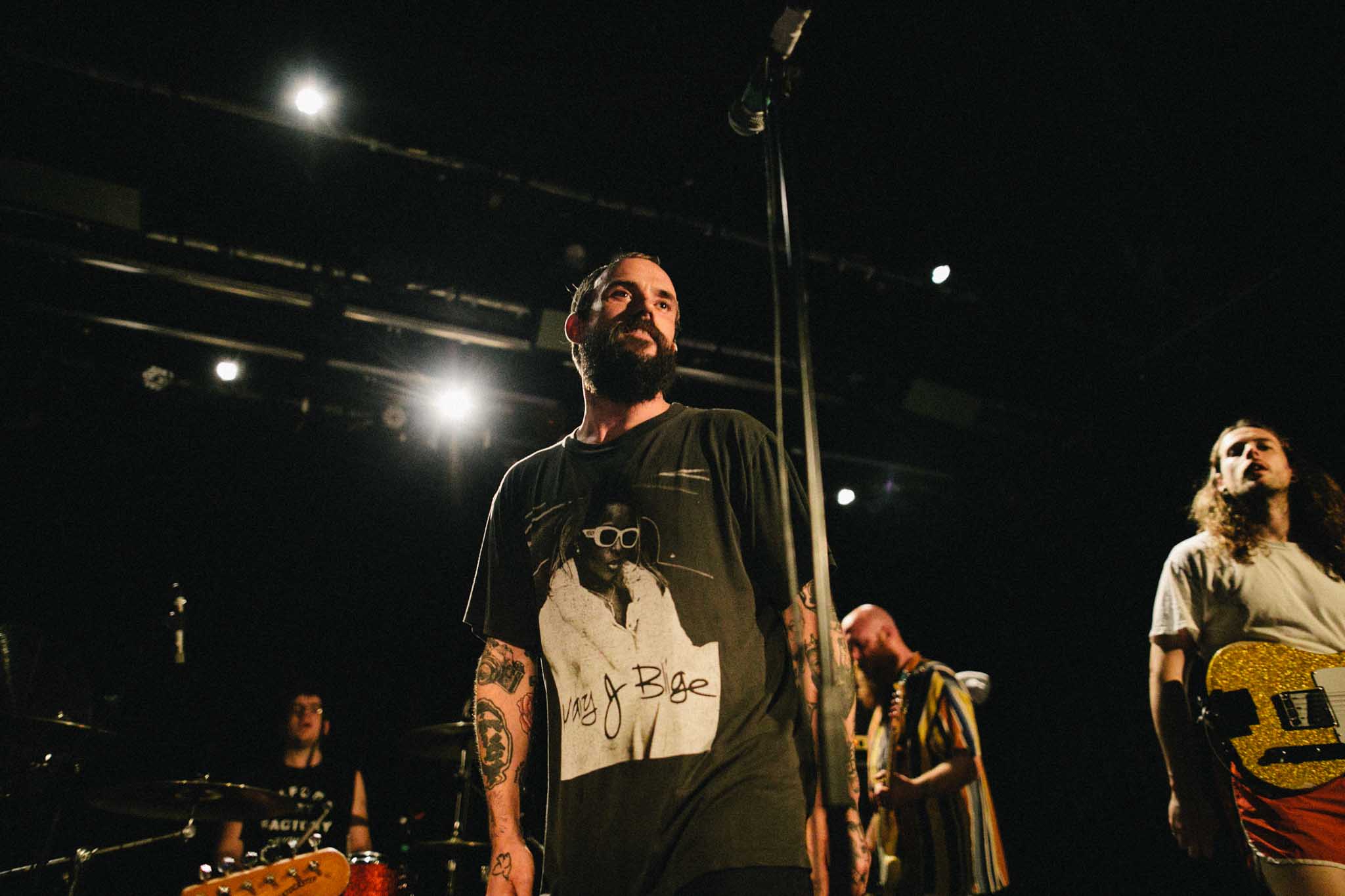 It’s such a supportive crowd, too. When Talbot takes a sip from a VB can, a bunch of arms appear in the air attempting to stop him. Someone from the crowd yells, ‘Are you drinking again?’ and Talbot recognises the concern in his voice. ‘Yes, I drink,’ he replies. ‘Responsibly.’

When I got home from the show, my boyfriend said I was talking like a teenager who’d just seen their favourite band. Two days later, I still can’t wipe the smile off my face. And for the first time ever, I don’t feel like I’m not welcome in the boy’s club—I feel like it no longer exists.