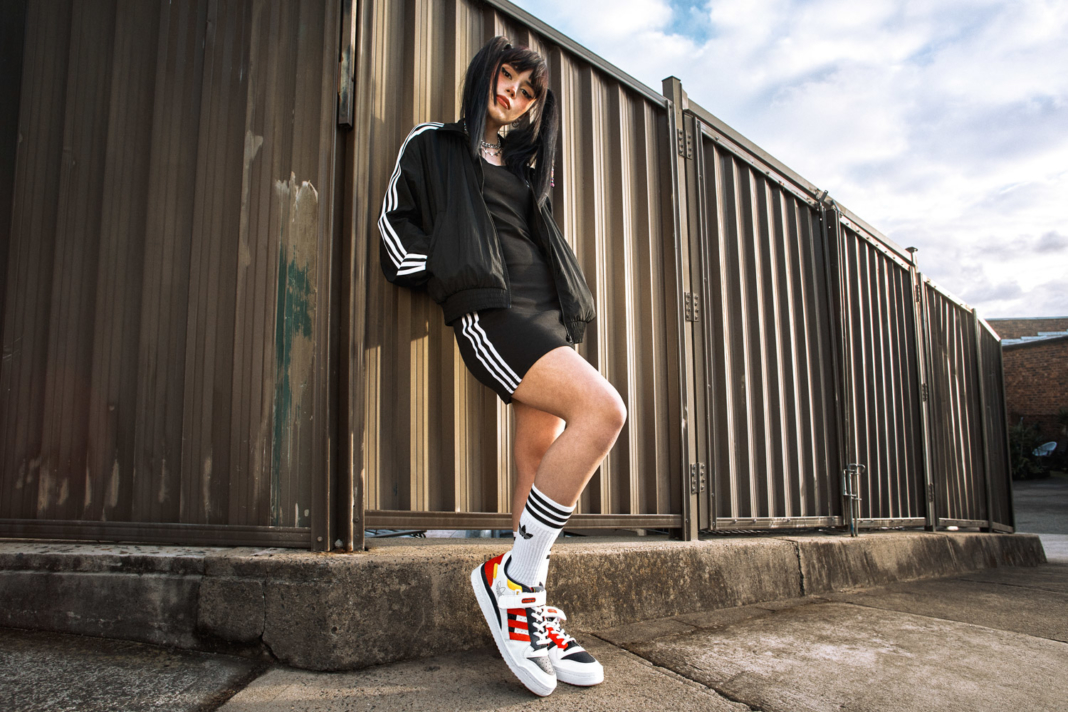 Mia Rodriguez launched her music career in the middle of a pandemic.

In a time with no live shows, launches, parties, or face-to-face interactions to help propel a music career forward, it’s a testament to her ability as an artist to reimagine and redefine a new way of doing things. Aside from blowing up on Tik Tok, Instagram and YouTube, she’s also just been signed as one of the new Aussie faces of 80s style revival, adidas FORUM, alongside Genesis Owusu. Not bad for a 19-year-old. We caught up with Mia to find out how she did it.

You’re one of the biggest stars on Tik Tok. How has it helped leverage your career?

Well, I actually wanted to start building up a fanbase on a social media platform. I tried to do YouTube when I was 12, but that didn’t work out. But I found Musical.ly before it turned into Tik Tok and I built up a fan base pretty quickly. It went from like, 10 followers a week to 10,000 followers a week, to 100,000 a week, which is insane. It was kind of my plan all along to build a fan base and then introduce them to me and say, ‘Hey, I can sing a little.’ I wanted to show people I could sing and it worked. Eventually, labels came and started rolling in. Tik Tok definitely helped me get into music.

Was using Tik Tok something that you planned or was it more of an experiment?

I saw Troye Sivan start out on YouTube and go into the music industry that way. That’s something that I really wanted to do, and I thought it was a really good idea. So I tried YouTube, but for fun, because I did like making videos and I was, like why not give it a go? It didn’t work out quite as big as I thought. I racked up around 10,000 subscribers before switching over to Musical.ly [Tik Tok]. I downloaded Musical.ly as a joke because I thought no one really used the app anymore. It was kind of dead at the time, but it was just for fun. I started to post random stuff on there and it got attention. I was like, well, I’m going to keep going then and maybe this will work out, and it did.

It clearly did. Now you’re blowing up everywhere and releasing heaps of cool stuff. That music video for ‘Psycho’ is super impressive, by the way. Can you tell us a little more about how it came together?

I had this theme for my music persona of a crazy… I guess you could say a psycho kind of character. My music video producer worked on emotion as well, which I really liked, so I went back to him and was like, I have this new song called “Psycho” and I want to make it psycho. We exchanged a bunch of ideas, like me throwing a hairdryer at people and kidnapping them. It was exciting to come up with, all the colour schemes and outfits. Heaps of fun.

I think we’re all feeling a bit psycho with the world being in a weird state right now. What’s something that you do to embrace this world of unknowns?

Besides singing, I’ve always had a lot of hobbies, mainly related to creating things. I like to make my own jewellery, make stuff out of clay. And I like to game a lot, like play games on my PC. So thankfully stuff like that is keeping me sane and keeping me distracted.

Yeah really important. I started crocheting. Not really cool though.

My point exactly. Anyway, back to you, much cooler. You were a presenter at the 2020 Aria Awards and opened Lime Cordiale’s Youtube Music Sessions, both of which were virtual—everything seems to be happening online at the moment. Do you shift anything about your performance when performing virtually?

I first started performing online and in front of cameras, so it has just been what I have always known. I don’t really change much except interacting with actual people versus the camera. But I just treat the camera like it is a person and a full audience in a room anyway.

Tell us about how your collaboration with adidas came about?

I logged into Instagram and saw they DM’d me saying they wanted to collab. I was like, ‘Oh my god, this is a huge brand.’ My family love adidas too, so I was really excited.

So, easy as that; just have to blow up on Tik Tok. Noted. You obviously have style then if adidas picked you up. How would you describe your own style?

I get a lot of my inspiration from movies. My dad and I used to watch a lot of Tim Burton movies together. He loved horror movies and I was obsessed with the art and style from them, so I wanted to incorporate that into my own clothing style. I kind of think to look like a movie character when I dress up. I get a lot of inspiration from DC villains like Harley Quinn, Poison Ivy and Cat Woman. I just really like that whole villainess, creepy, spooky vibe.

I can see that for sure. And how has working with adidas opened you up to new creative experiences?

It was just a great experience working for such a big brand. Obviously, I’ve never done that before so it was just cool to see all the crews and work that goes behind the teams that make adidas. It just opened my confidence up. I got to meet Genesis Owusu which was cool because I’ve been a big fan of him for a while. I only gained the courage to say goodbye to him when he left (laughs).

What’s something creatively you might want to explore further down the track, be it musically or otherwise?

Because of Covid, I haven’t been able to go anywhere, so I’d really love to go on tour and go to different countries. Meet people, meet fans, interact with different worlds. That’s what I’m really looking forward to. 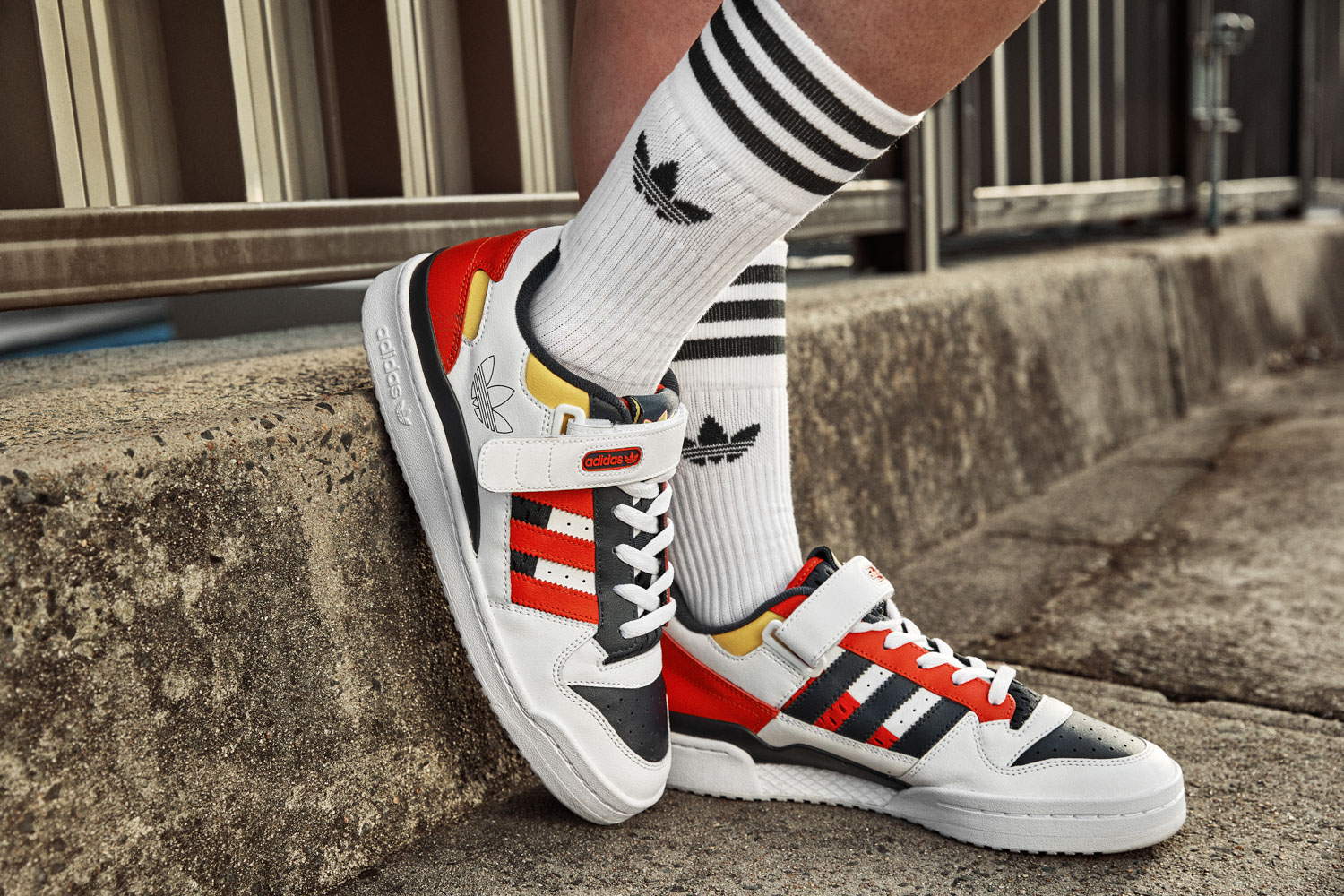 Travel is the best. I think everyone is looking forward to that. Back to your collab with adidas, what’s your favourite piece from the adidas FORUM range and why?

The Forum Lows. I loved the ones I wore for the campaign with the pop of red. Super comfy and can style them easily.

Yeah. Buy some adidas Forums cause they’re super comfy and be prepared for some new music dropping later this month. Thanks for ya time.