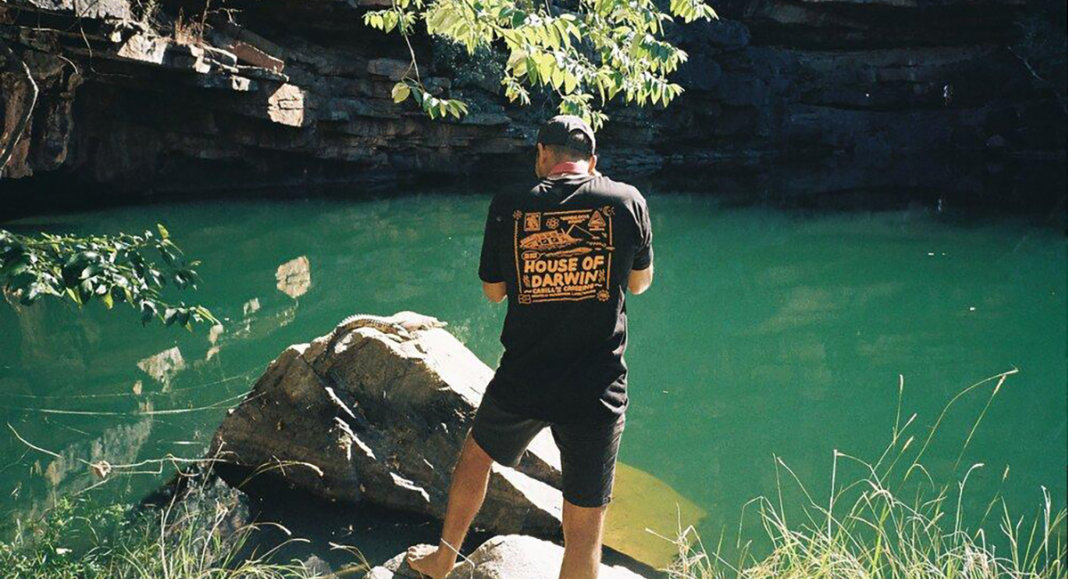 Darwin is the ancestral home of the Larrakia people.

It is also here that House of Darwin, a 100% First Nations-owned clothing company that raises funds for social programs in Indigenous communities of the Northern Territory, was born. One look at the range, and you can tell this brand has something unique that just can’t be mimicked. We think it’s largely due to the diverse cultures and references that make up the beautiful lands of Northern Territory that it is inspired from, but it’s also probably got to do with the legend behind the brand too.

Scrolling through House of Darwin’s socials, one caption reads ’I’d like you to know this brand isn’t about me. It’s about you and the Northern Territory—so you won’t hear from me often.’ That’s Shauny Edwards, as humble as they come despite being an ex-professional AFL player who got to live out his childhood dream until retiring at 23. Some may say this was an early retirement, but when you delve into why a Larrakia kid from the Northern Territory just didn’t think footy was the be-all and end-all of life, you can only commend his decision. Following trips back to his homeland (a place far away from the smashed avocados of Melbourne), Edwards realised what he was doing as an athlete wasn’t really helping out his community. For Edwards, tackling the health issues, education gap, and suicide rates among Indigenous people (the highest in the world), was way, way more important than kicking goals.

After a stint in LA with Ksubi founder Dan Single, Edwards began working with AIME mentoring, the organisation working to close the gap for marginalised kids around the world and get them into university. The artistic influence of LA clearly rubbed off on Edwards, as he honed in on what he wanted to do: use creativity to tell stories. And so House of Darwin is here, a social enterprise company that reinvests all the profits back into grassroots organisations and delivering programs that inspire, educate and cultivate change.

Despite stepping away from AFL, Edwards still understands the immense power sport holds in breaking down barriers while providing a platform of discipline and opportunity to those who involve themselves. ‘It’s a universal language which transcends geographies, ideologies, and cultures. The doorway opens for people from all walks of life to excel is unparalleled in many other fields.’ Through House of Darwin, $25 000 worth of sporting gear has been delivered within Arnhem Land so far, as well as funding to emerging Indigenous artists, and keeping the local radio station running.

During a time of awakening on social reform around the world, House of Darwin is a tribute to the change we hope to see within Australia, shared authentically from local Indigenous voices. The range is bloody iconic too, featuring notable Northern Territory references– Yolgnu Radio, the Kakadu Bakery, and of course, a boxing croc. Support House of Darwin here. And remember, Respect Your Elders.