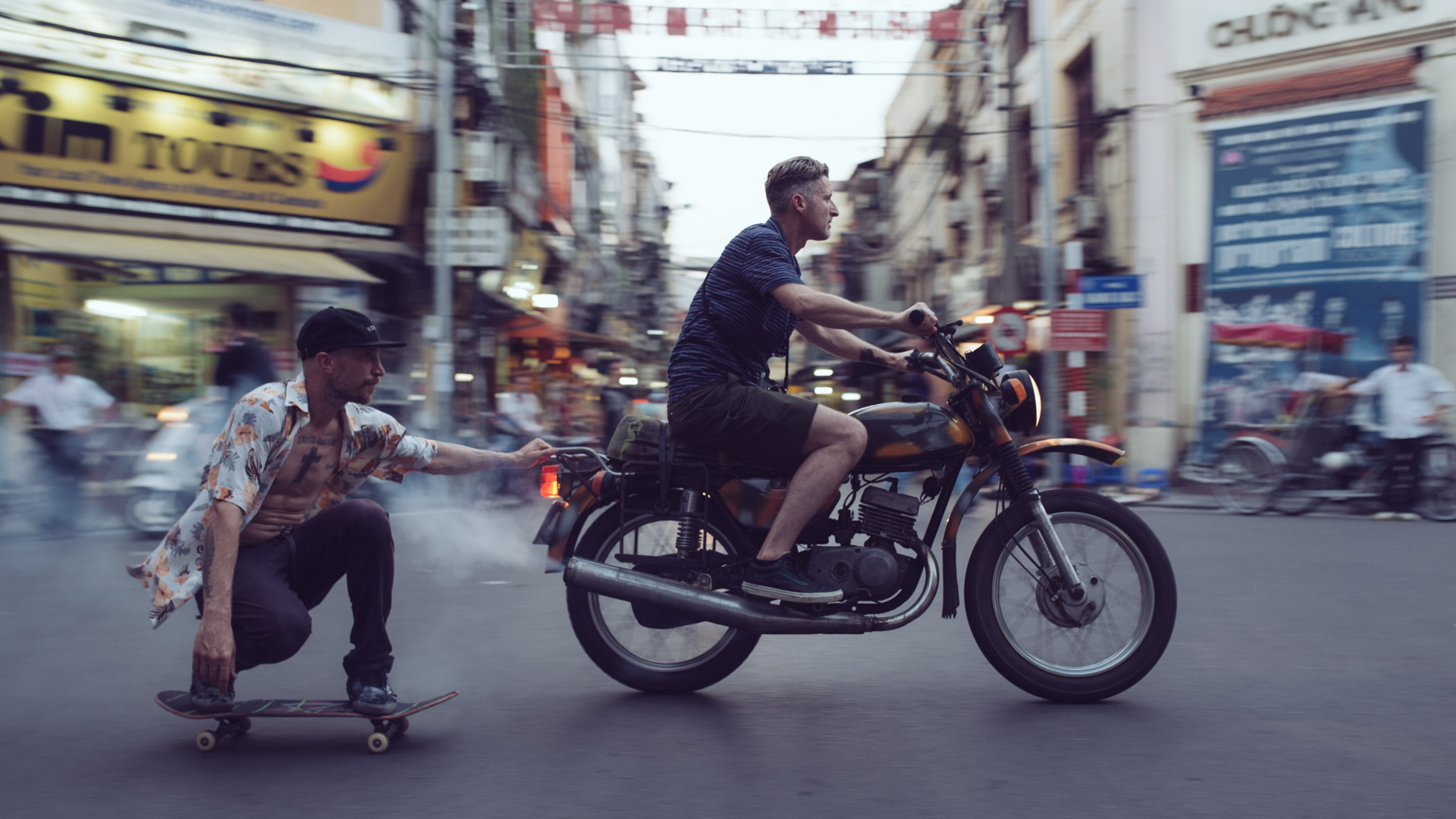 As a newcomer to the Roark Revival, this excursion to Vietnam would be my first experience with this group of seasoned adventurers. The trip, however, started with the feeling of familiarity; after a 24-hour stint of land and air travel we arrived in the busy capitol of Hanoi. After checking into the hotel we anxiously hit the streets to roll around and get acquainted with the infamous North Vietnamese city.

One is hard pressed to think about the 1960’s or 70’s without some image pertaining to the Vietnam War entering your mind. Claiming the lives of more than 3 million people, including 58,000 US troops, the Vietnam war was easily one of the most controversial wars ever and as a result incited a peace movement that swept across the United States. With nearly 2 decades of documented conflict, the imagery is plentiful and is the backdrop for the country’s history.

This level of conflict tends to permeate ones thoughts and it’s hard to imagine that as an American, we would be welcomed with anything but discord or strife. I’m not sure if our forefathers have been forgiven or if it was the sight of 3 white people scooting by on skateboards, but we were greeted with smiles and waves at every corner.

After spending a day and a half in Hanoi we loaded up Willys Jeeps and motorbikes for the next leg of the adventure with our guide Cuong. The basic plan was to ride through the countryside on motorcycles, then head to the coast at Ha Long Bay in order to spend a few days on a junket sailing off of the Cat Ba Islands, while ending the trip in Da Nang in search of surf. The photos and captions below are a summary of our 10-day adventure to Vietnam. Check out Roark’s spring line inspired by Vietnam here. 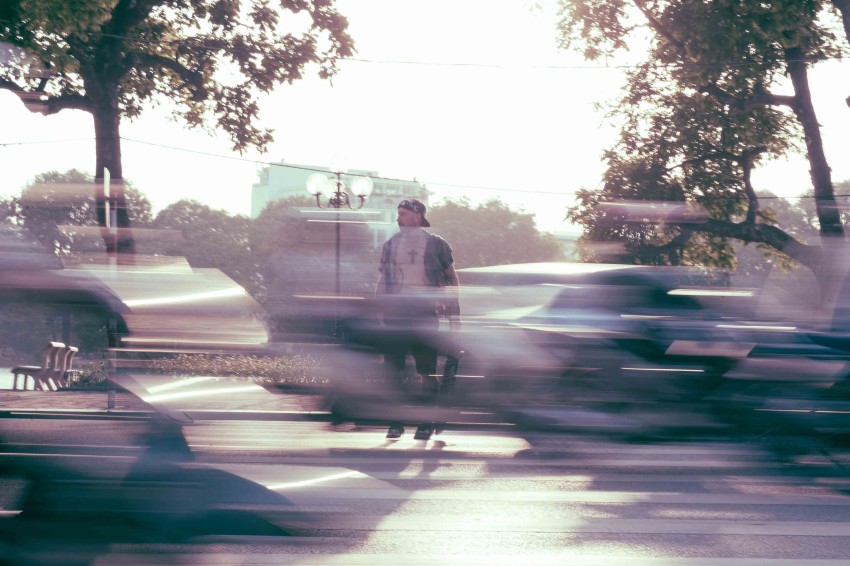 Although we only spent the 36 hours in Hanoi, it was good to get our fix of the hecticness of the city before heading out into the countryside. 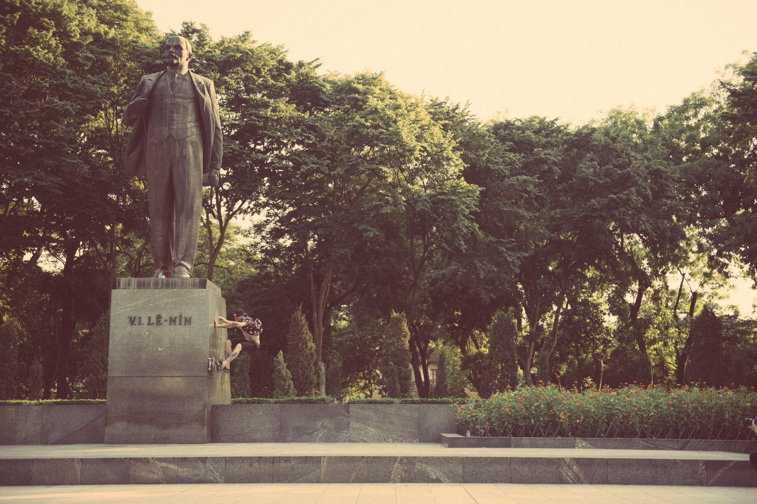 One is constantly reminded of Northern Vietnam’s communist roots. We found this marble plaza with a statue of Lenin. Although it took a while to get the legs moving, we exhausted our pent up energy from our travels. 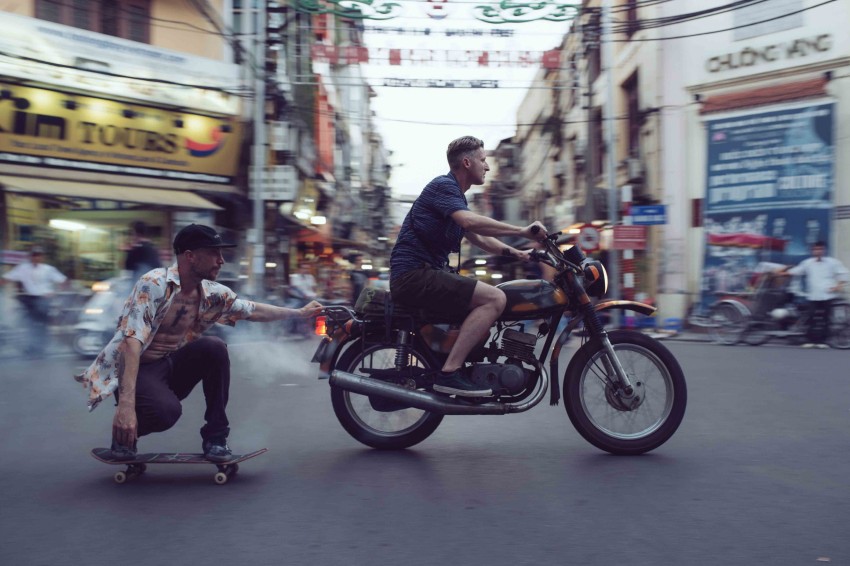 With millions of scooters filling the Hanoi streets, we decided to rent a motorbike to get the full experience of the city. 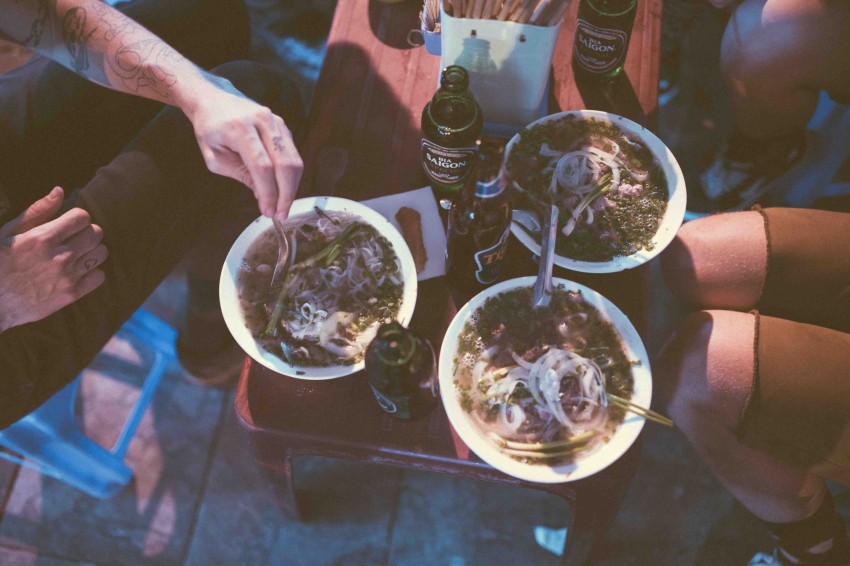 We heard about a street pho spot that was a must; our 70-year old hostess offered to meet ‘all’ of our needs, but we resisted the temptation and stuck with the pho and coldies. 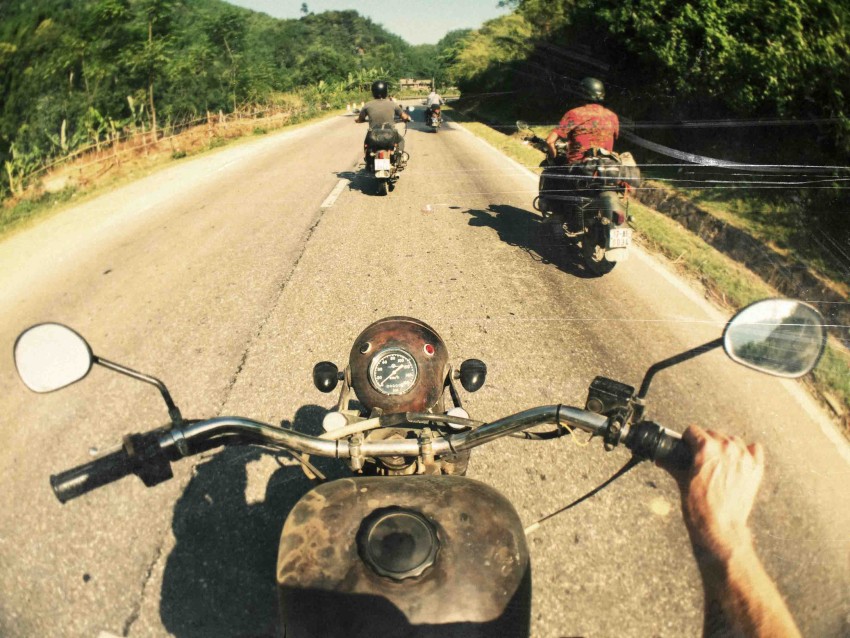 When you’re on a motorcycle, you’re instantly connected with your environment. There are no devices or distractions and your senses are heightened as you absorb everything the journey has to offer. 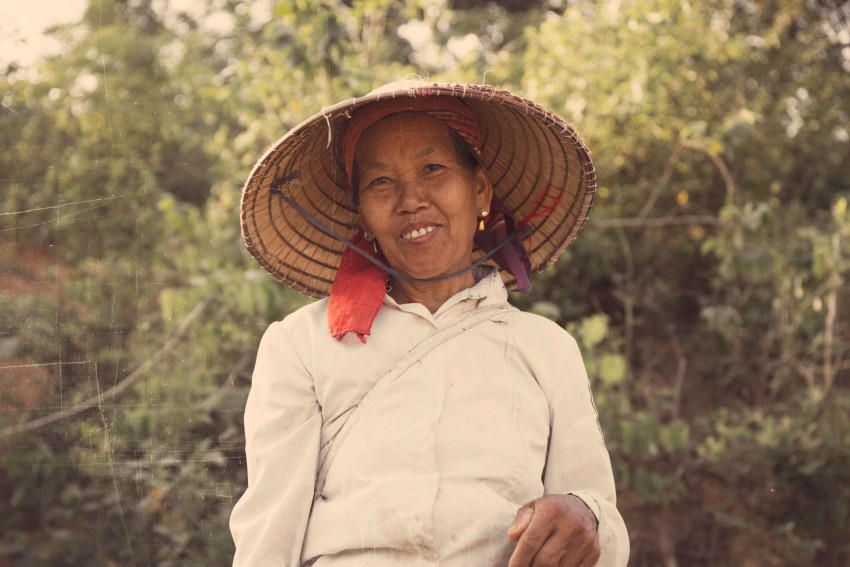 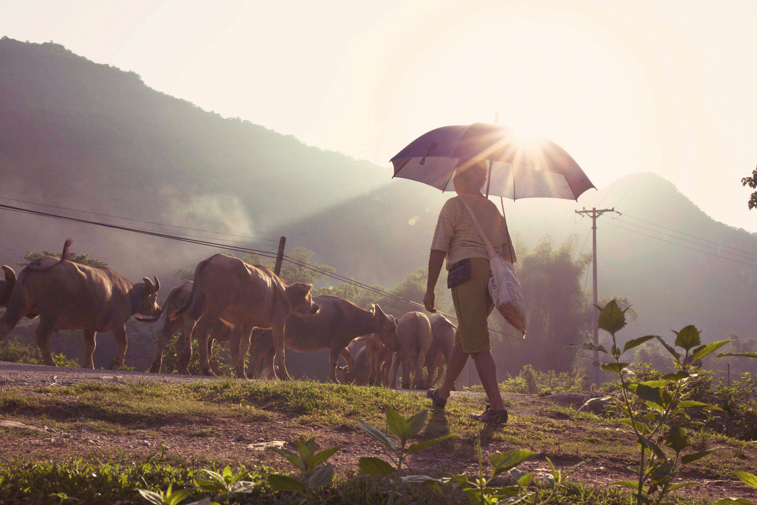 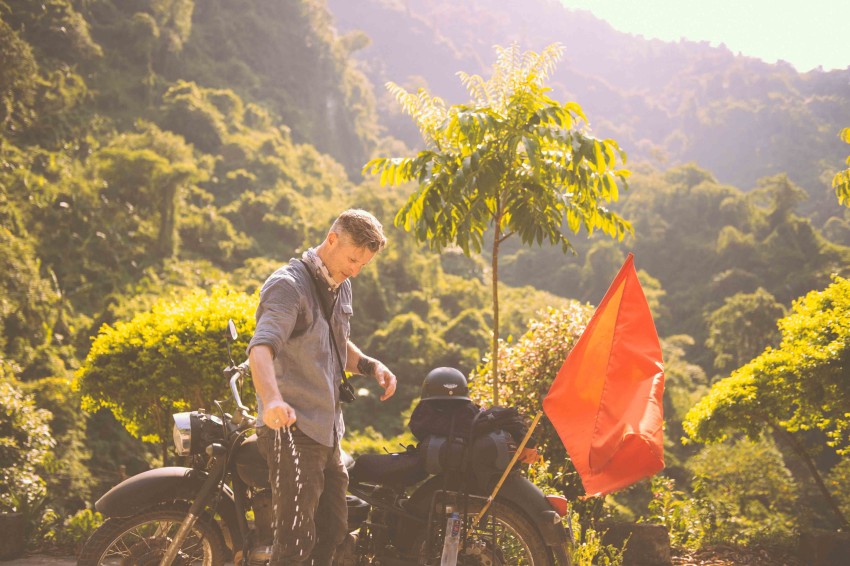 It being the first few days of summer, we all knew that our journey would be met with sweltering heat and smothering humidity. 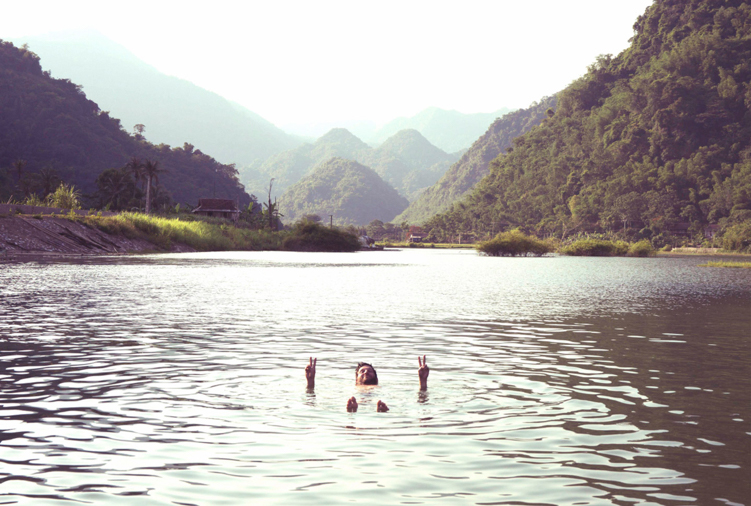 We sought refuge from the heat and found a lake to quench our thirst for the ultimate bromance. This is Ryan Sirianni AKA Rod Stewart in his favorite “Toes Up Position!” 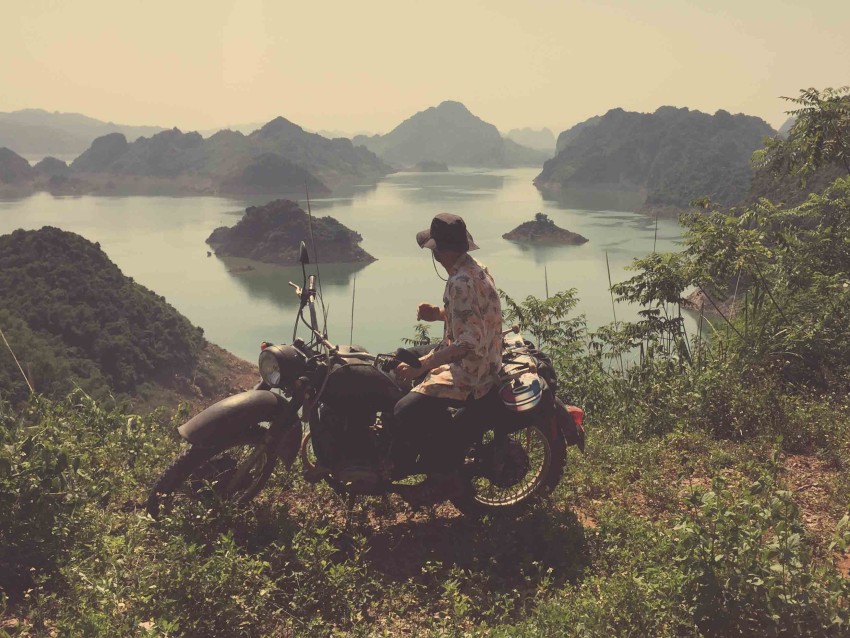 The views demanded our attention and we respectfully obliged with absolute admiration. 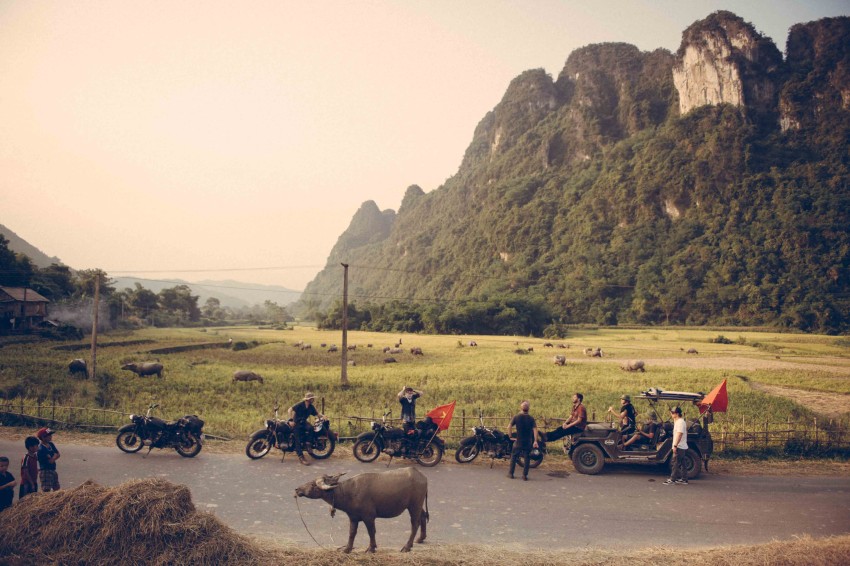 A lot of water buffalo roadblocks while touring the countryside. 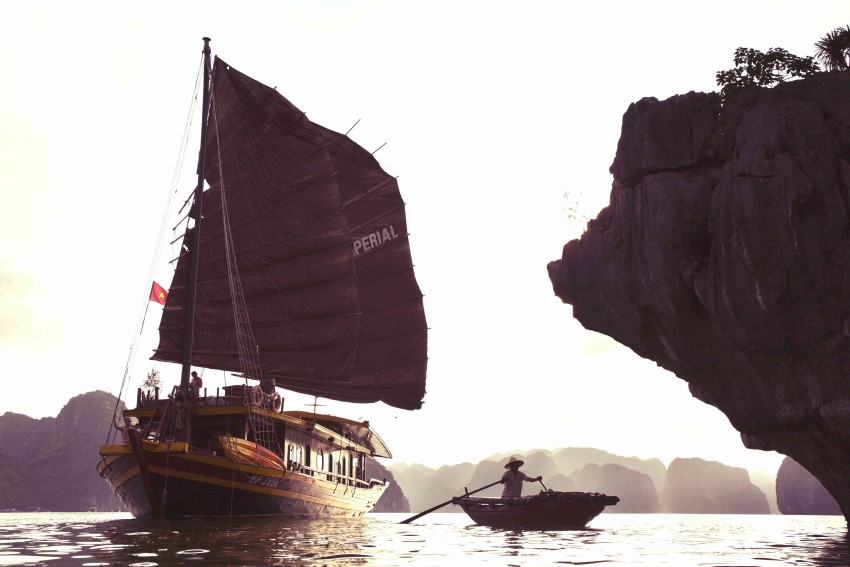 We decided to beat the heat and headed to the coast at Ha Long Bay in order to spend a few days on a junket sailing off of Cat Ba Islands. 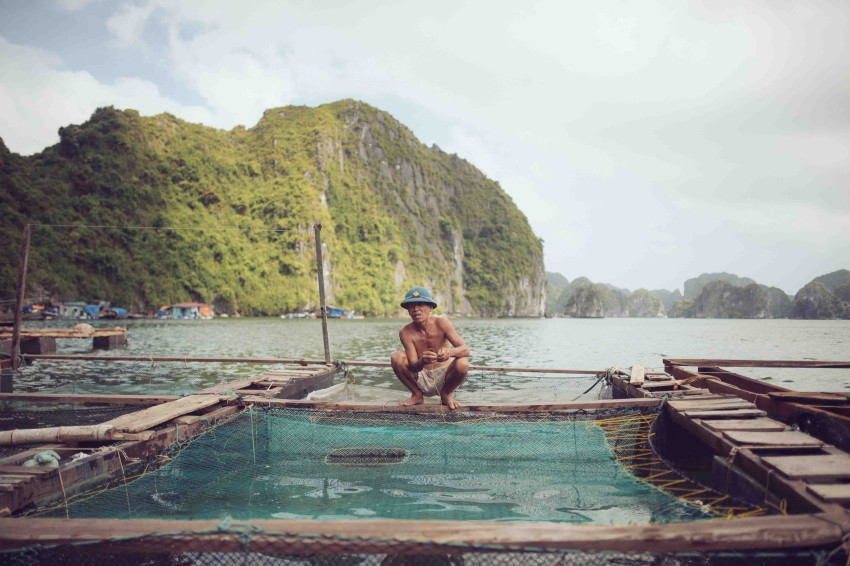 Families have been living on boats and water farming for hundreds of years in the Cat Ba Islands. 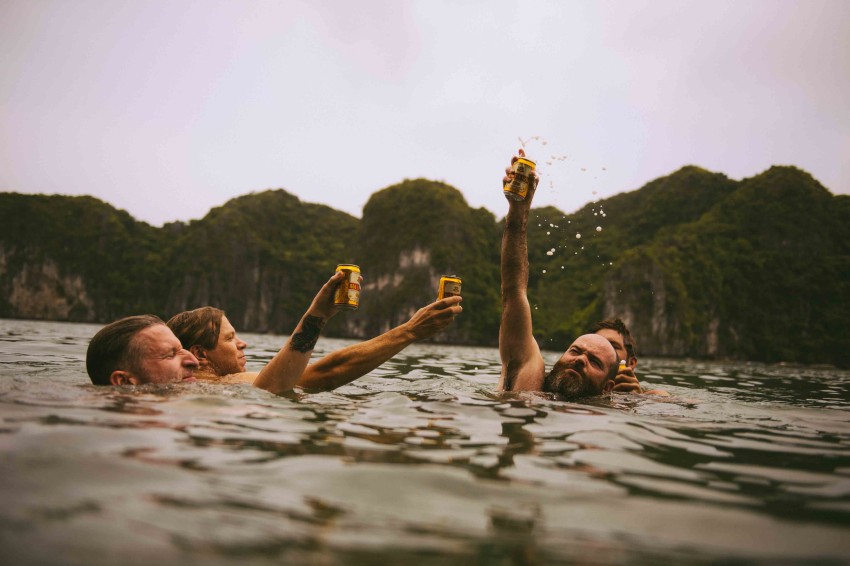 It didn’t take us long to embrace the serenity of Ha Long Bay. 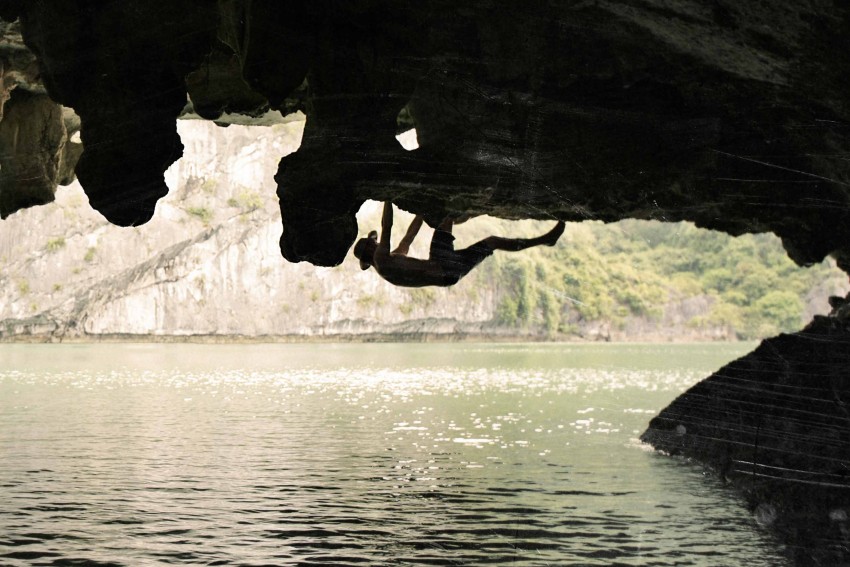 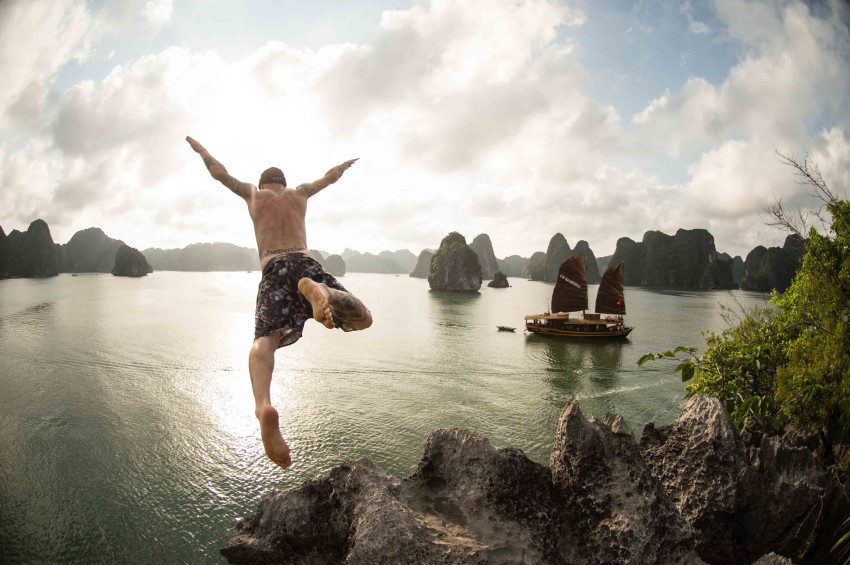 After a spell of decompression we sought out the adventure that awaited us, me cliff jumping in the Cat Ba Islands. 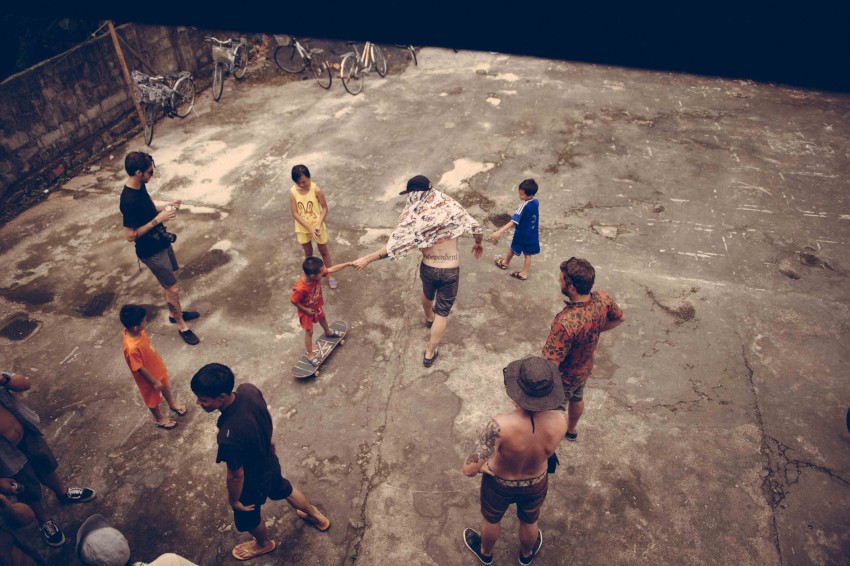 We visited a fishing village and introduced skateboarding to the locals; it was a joyous introduction. 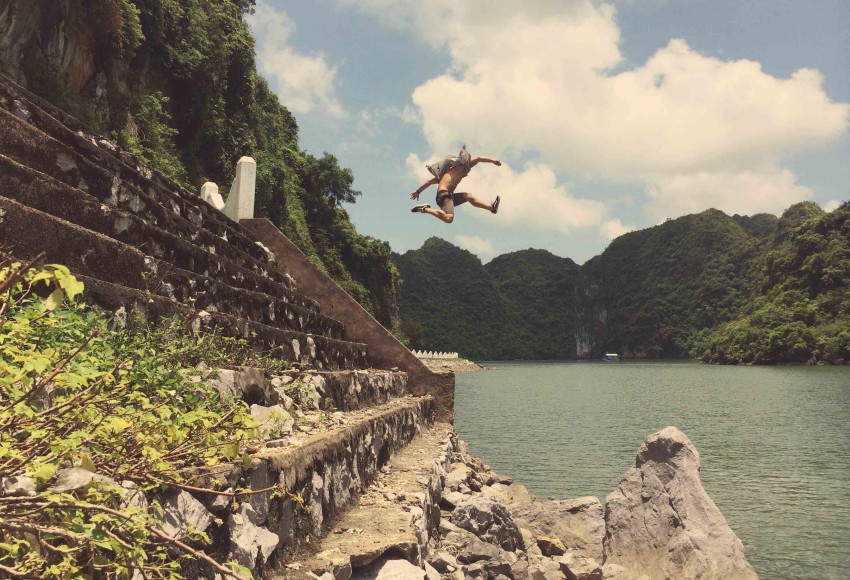 Being the youngest, Nate Zoller, felt it was a good time to solidify his spot in the gang with this insane jump into waist deep water. 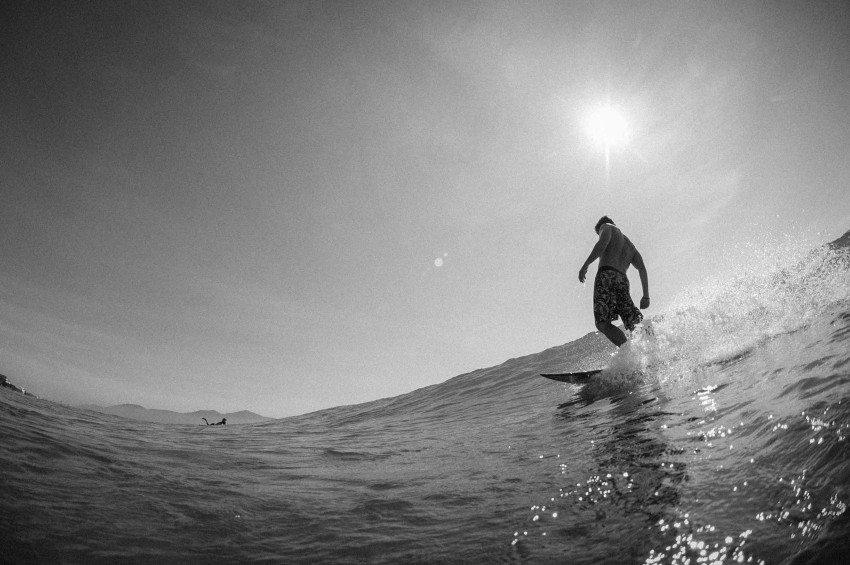 We didn’t get much surf but Nate made the most of the one-day we had swell. 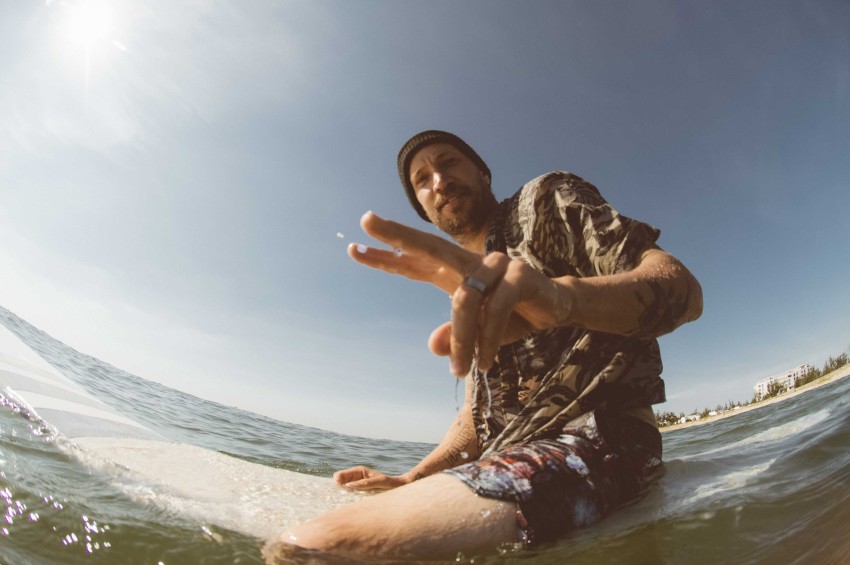 It was nice to get in the water after the record-breaking heat we endured on the first leg of our journey. 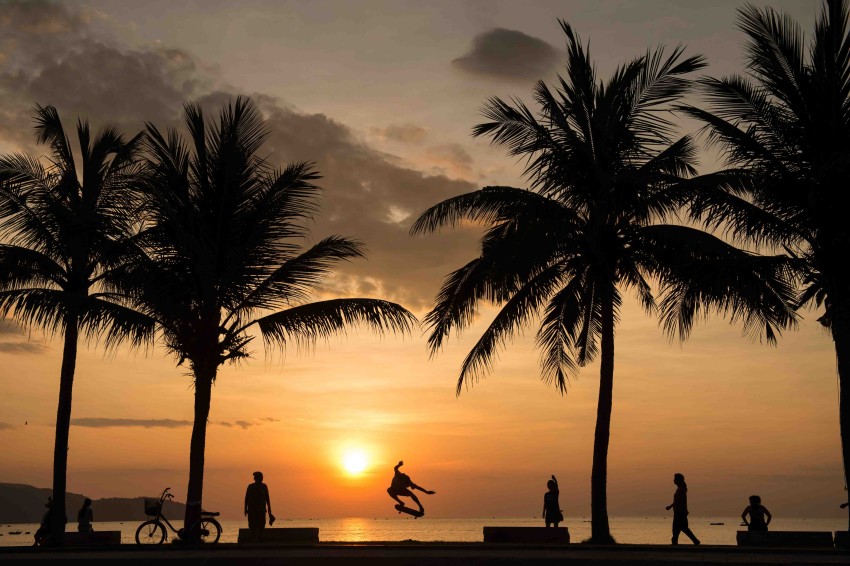 It was incredibly hot while we were there. The locals got up at 4:30am every morning and got their exercise in before the sun came up and so did I. 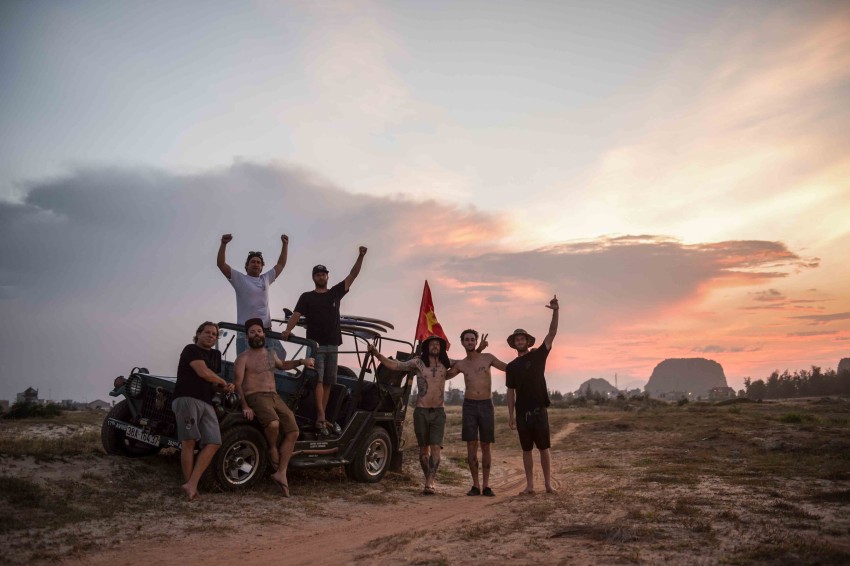