In early October, a bunch of skaters from all over the place gathered in Bangkok.

The event was held ostensibly to celebrate the 30th anniversary of the Vans Half Cab, but it was also a chance for the Vans Asia Pacific team to get together and skate for the first time in a few years—or, considering the median age, the first time ever. As well as a couple of skate jams, the event was also a series of live concerts and creative workshops, and a showcase for the amazing scene at Baan Preduce, a Thai skate brand, shop and public skatepark. 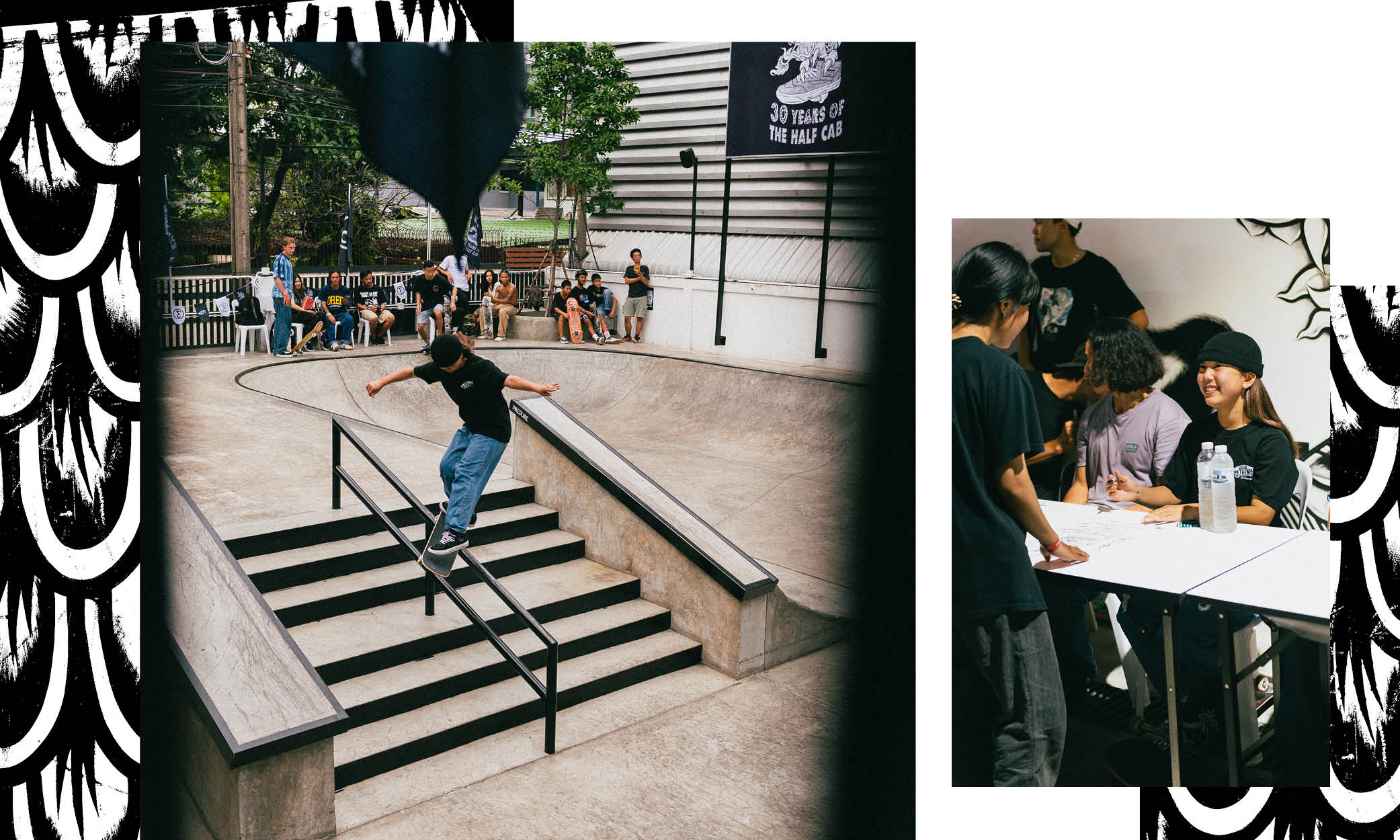 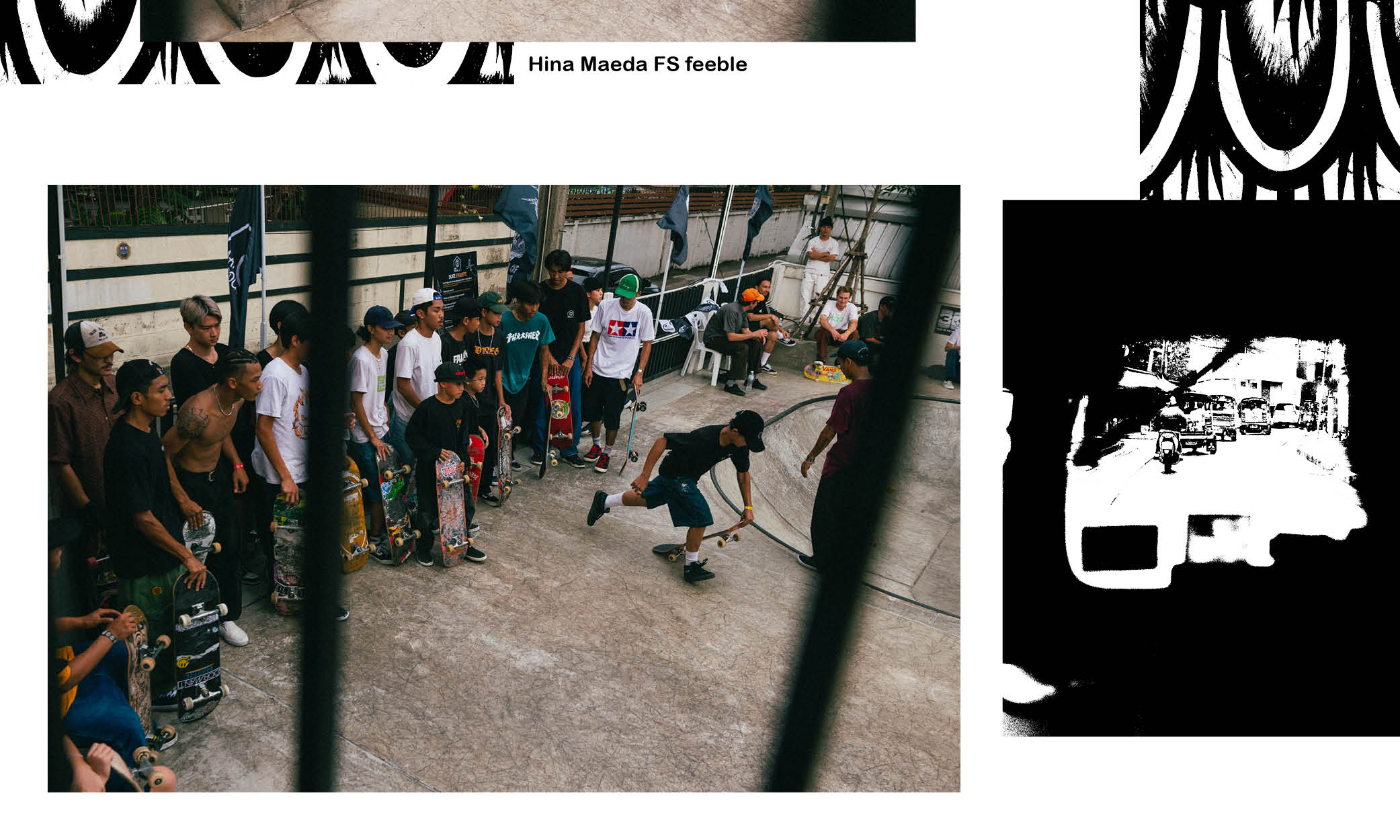 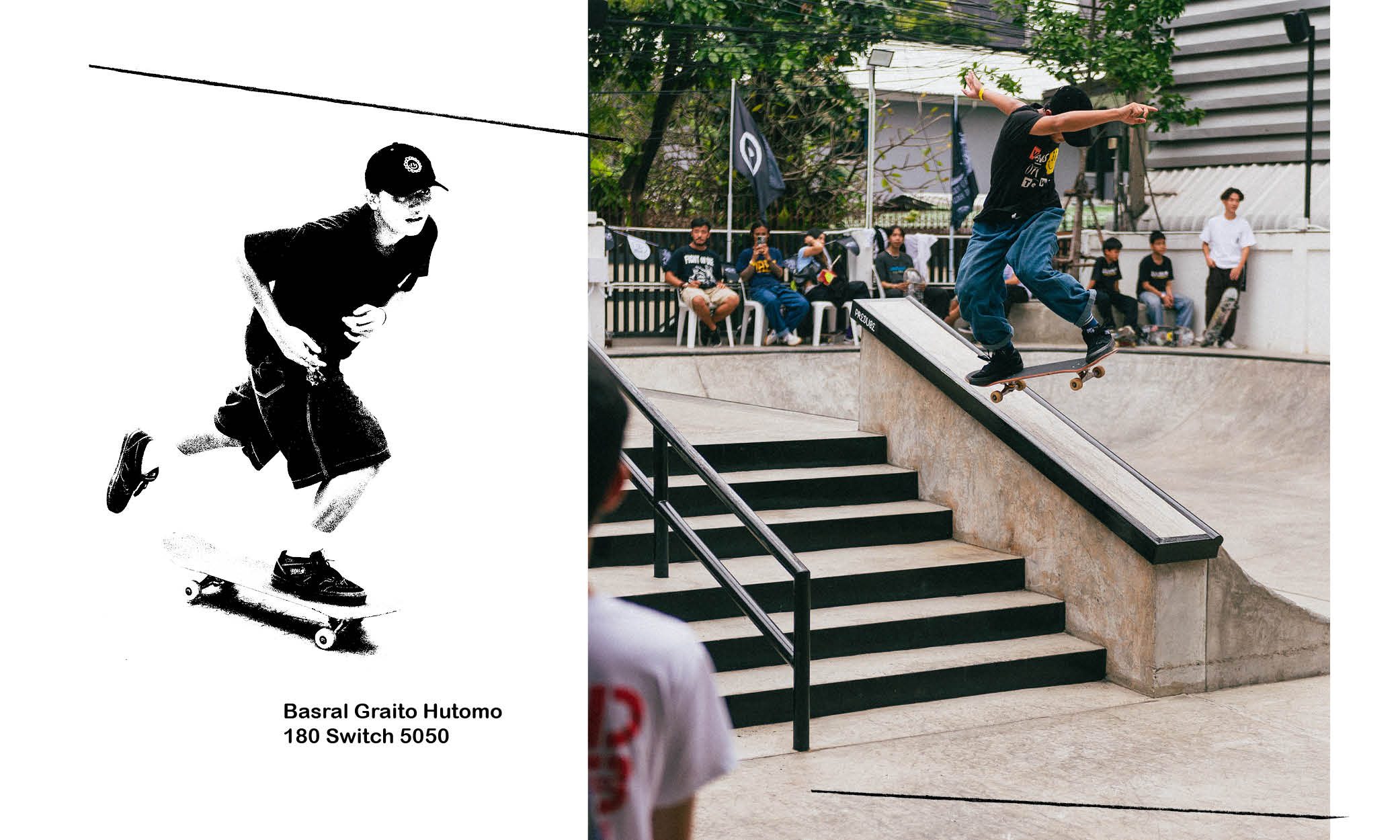 We luxuriated on the upper floors of a five-star hotel right next to the skatepark, complete with a hilarious waterslide into a pool, a steam room and a sauna, and an outstanding breakfast buffet, which we took full advantage of.

I met everyone and instantly forgot their names, but everyone was very friendly and seemed to know mine. When we had a chance to skate the park, the depth of talent was instantly evident. Everywhere you looked, someone was switch flipping down something, big spinning into something, or kickflipping out of something else. 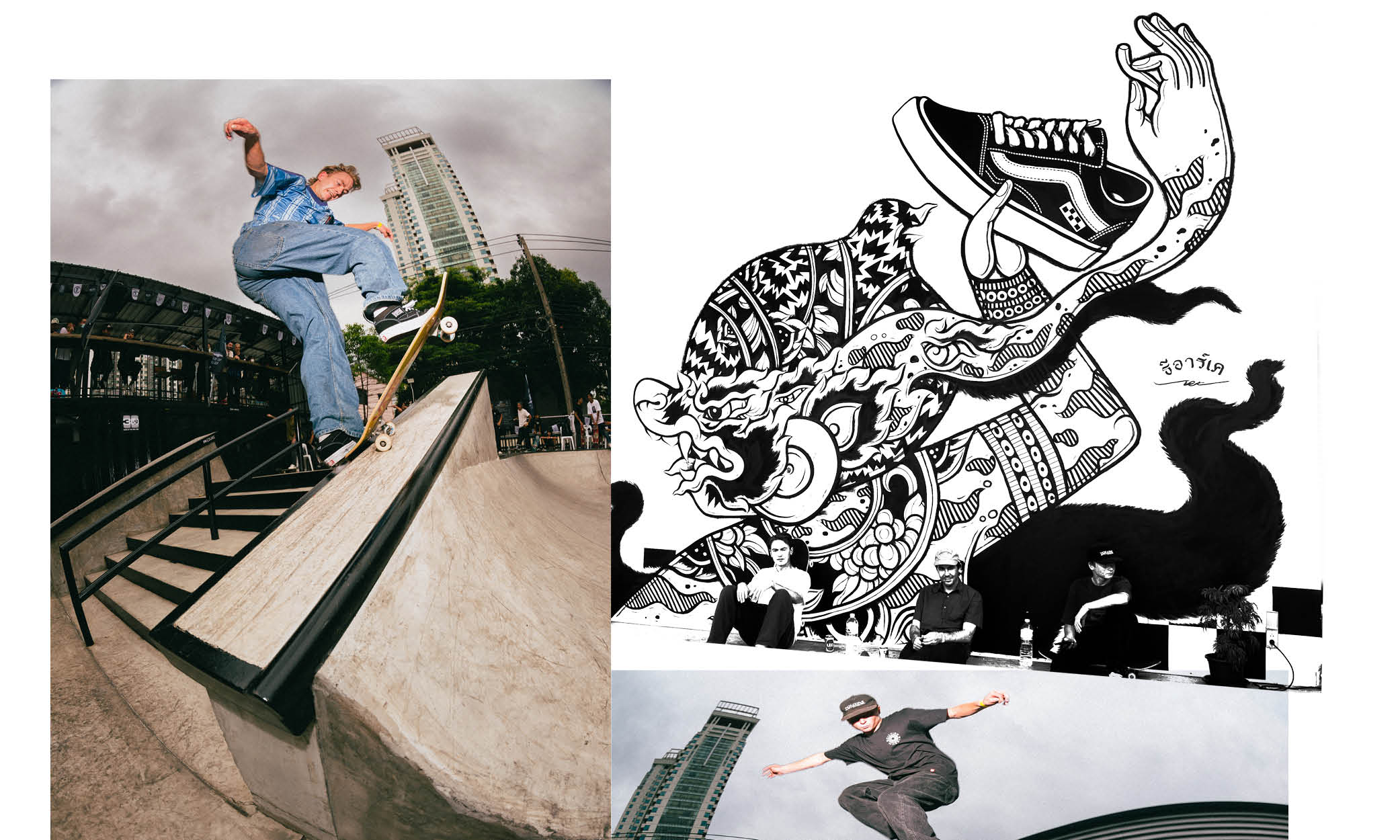 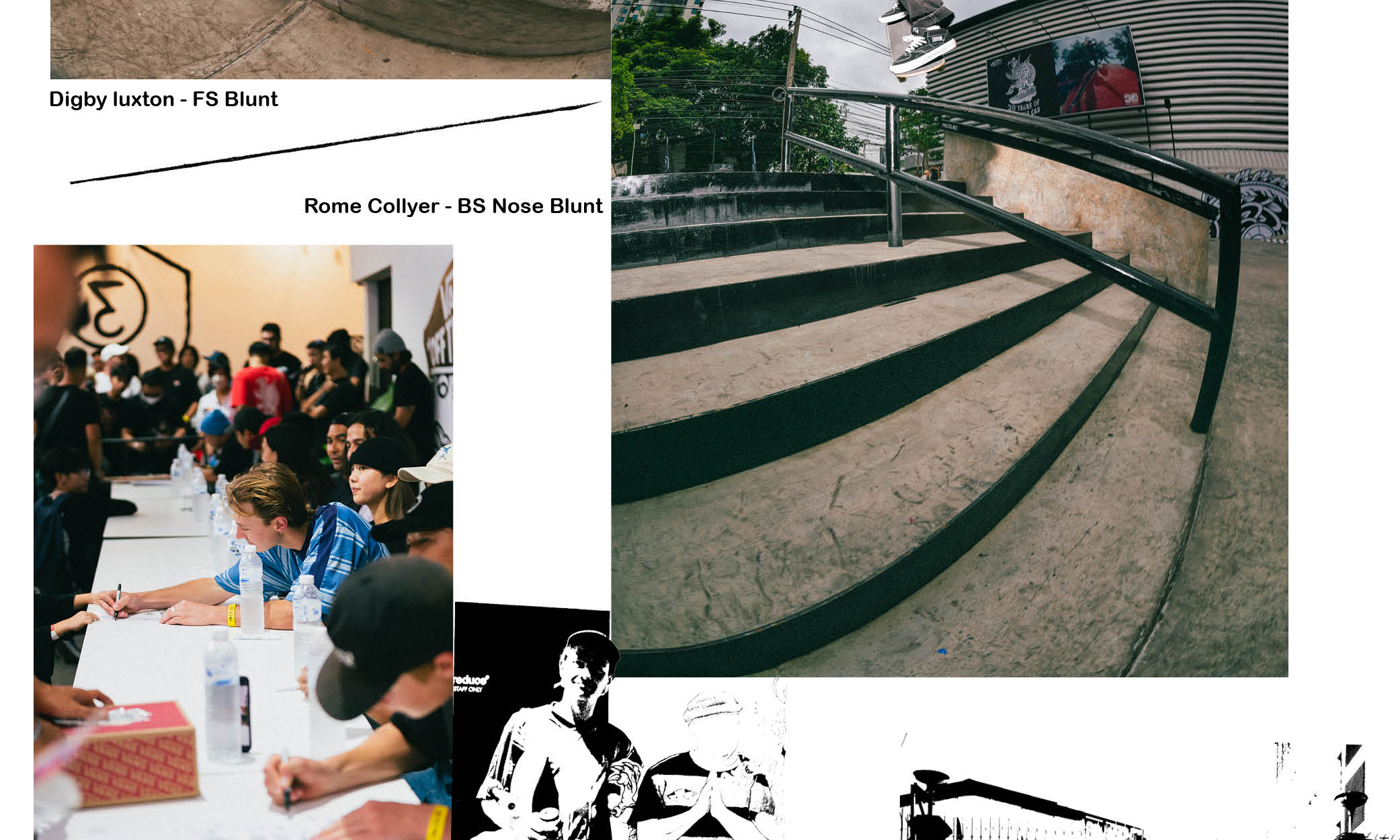 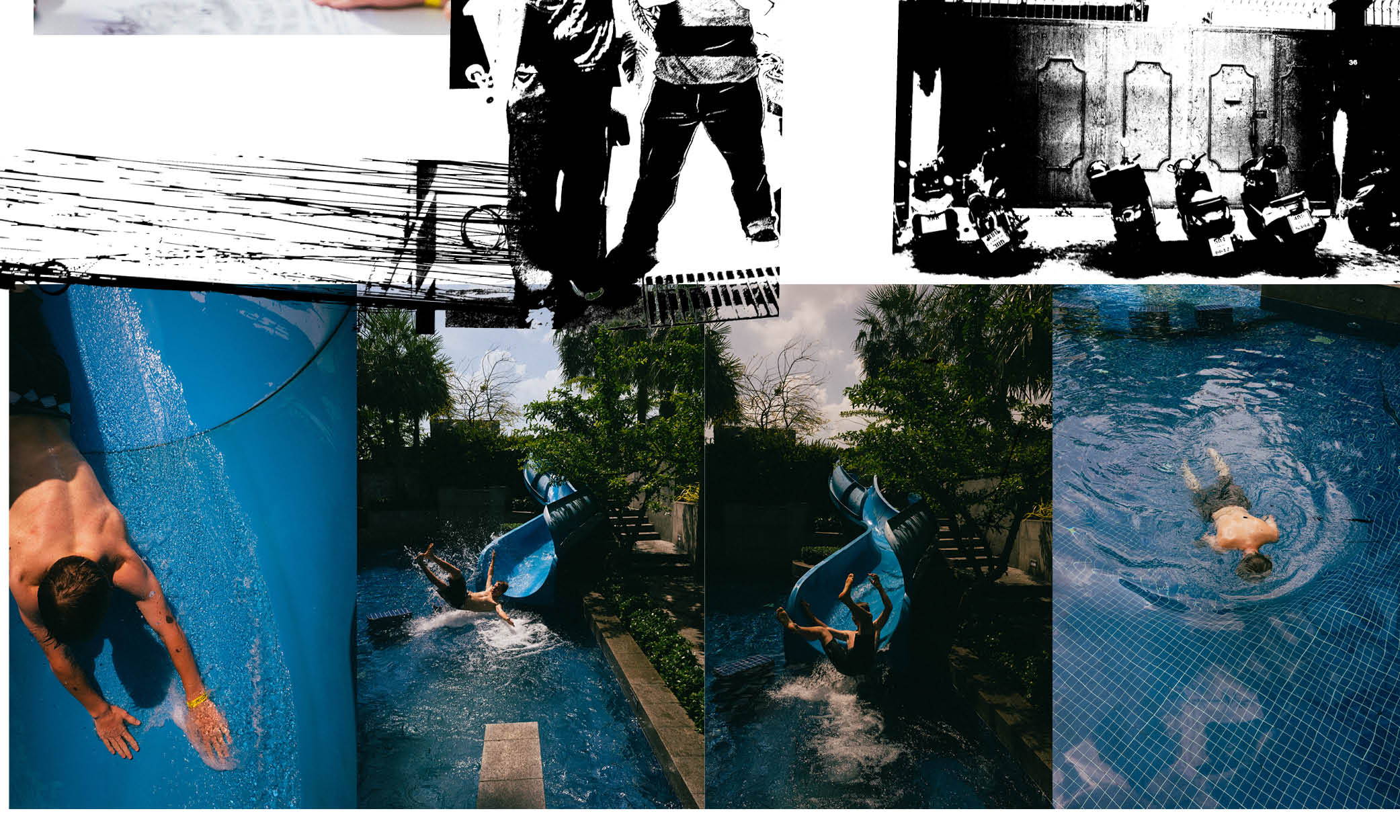 I developed a crush on Shor, a Japanese dude who skates fast and flowy in a way that makes you rethink all your life decisions. His teammate Daiki was similarly impressive—but what am I saying? Everyone was very good. The Australian contingent comprised Digby Luxton and Rome Collyer as well as team manager Jon Fitzgerald, with myself and Bryce Golder on ‘media’. It was lovely to be back amongst my own kind: Melbourne eccentrics. 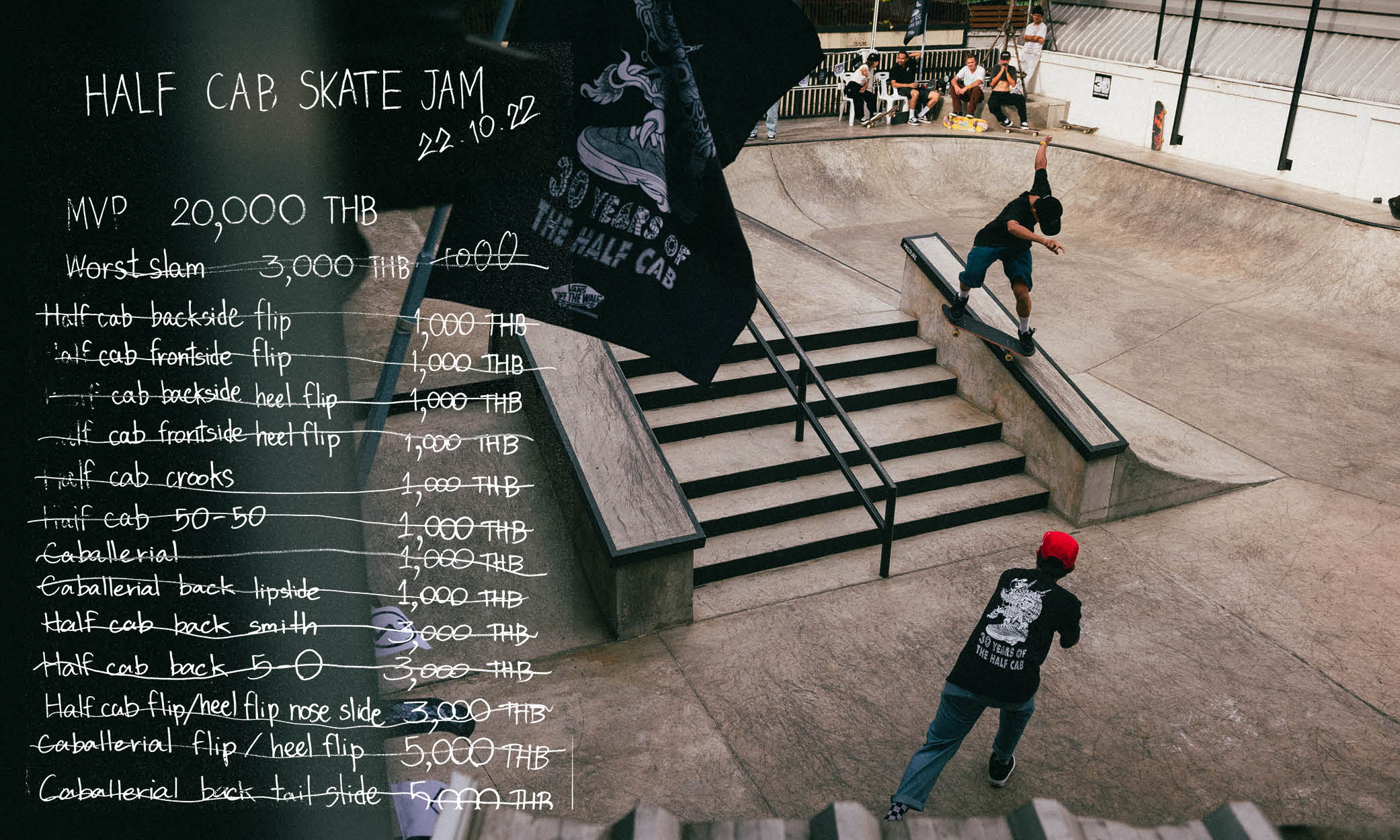 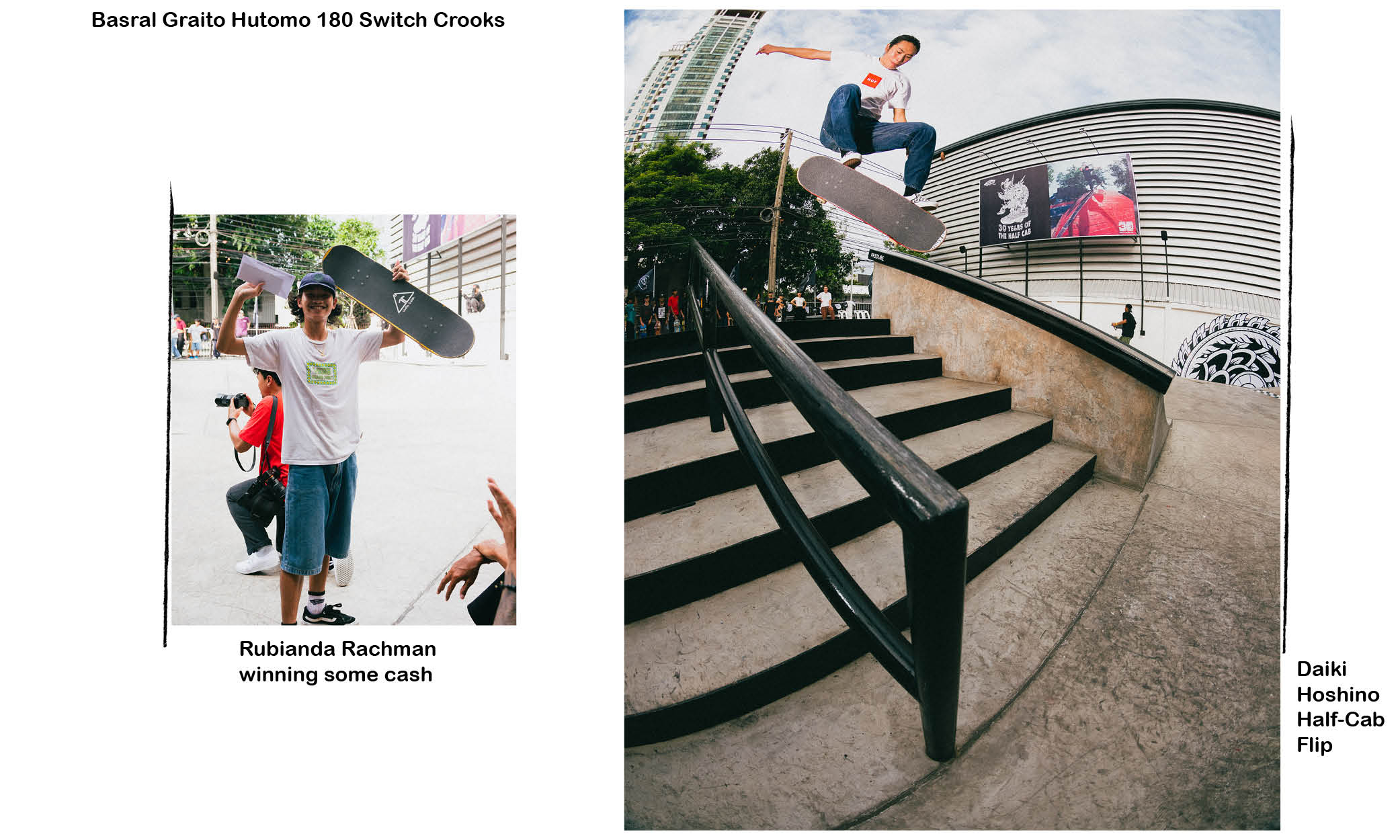 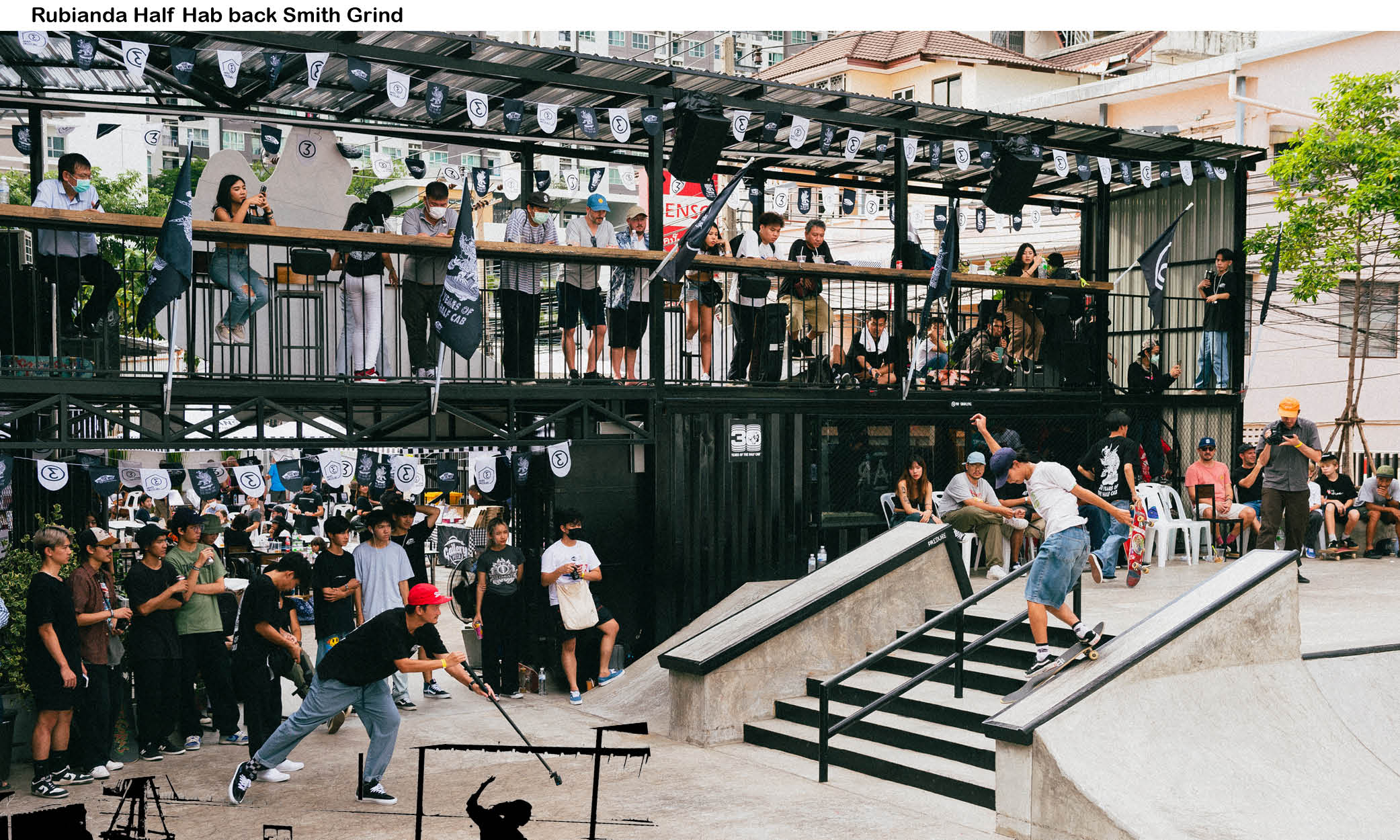 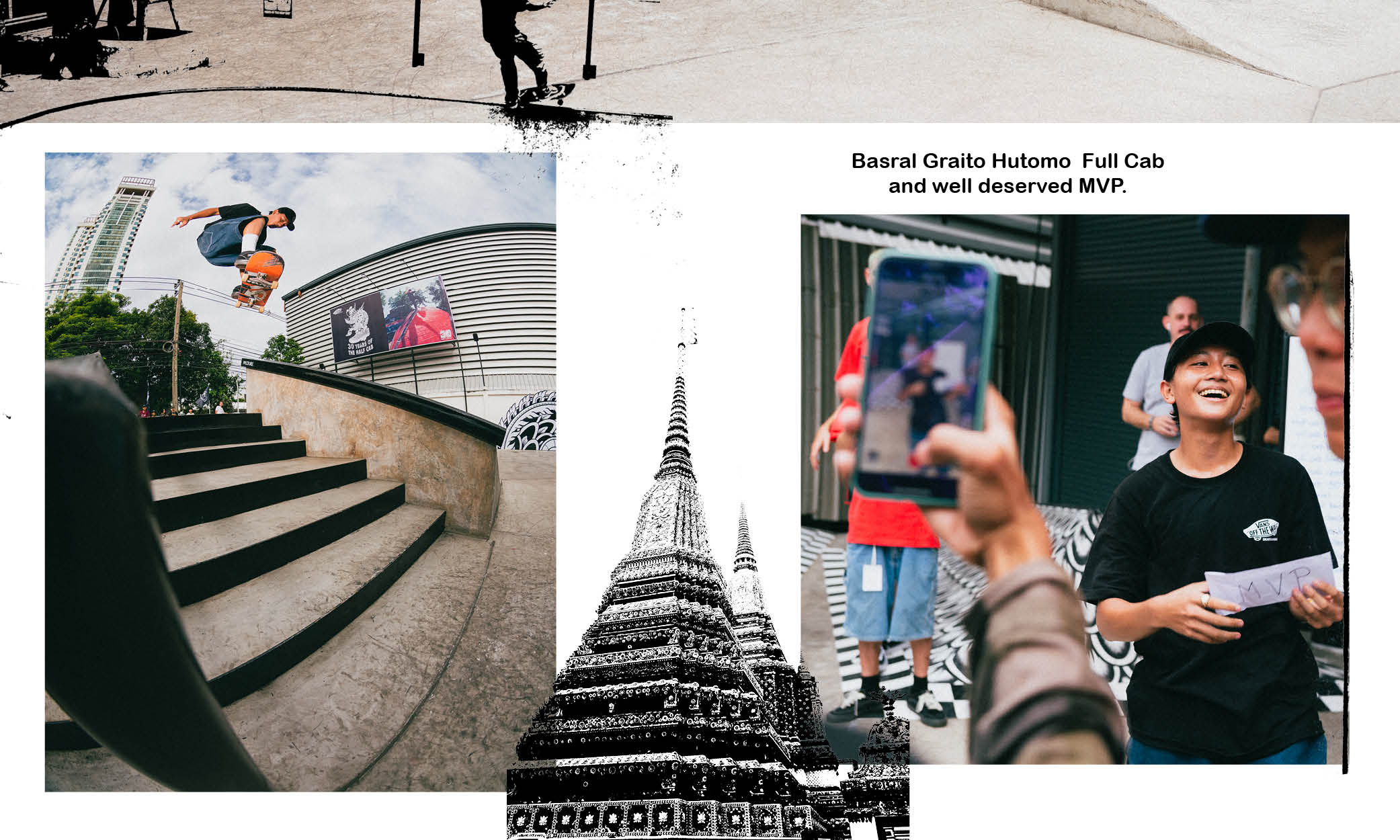 Bangkok is an incredible city, messy and sprawling, which you could easily spend a few weeks exploring without even touching the edges. I’ve been on a couple of these types of jaunts and the itineraries are usually so busy that you wind up just going from the hotel to the skatepark, to the bar and back to the hotel—rinse and repeat. But on this trip, I made sure to take any spare moment I could to explore the markets and street food stalls of the city. Highlights included an eye-watering Papaya Salad pounded together in front of me in a mortar and pestle; amazing iced coffees prepared through what looks like a sock; and a red-hot pad kra pao pork with a soft fried duck egg. On Thursday night, we had a welcome dinner at Baan Preduce, where a chef prepared a nine-course degustation meal for us, the highlight of which was charcoal-grilled snails. Thai food is the best. 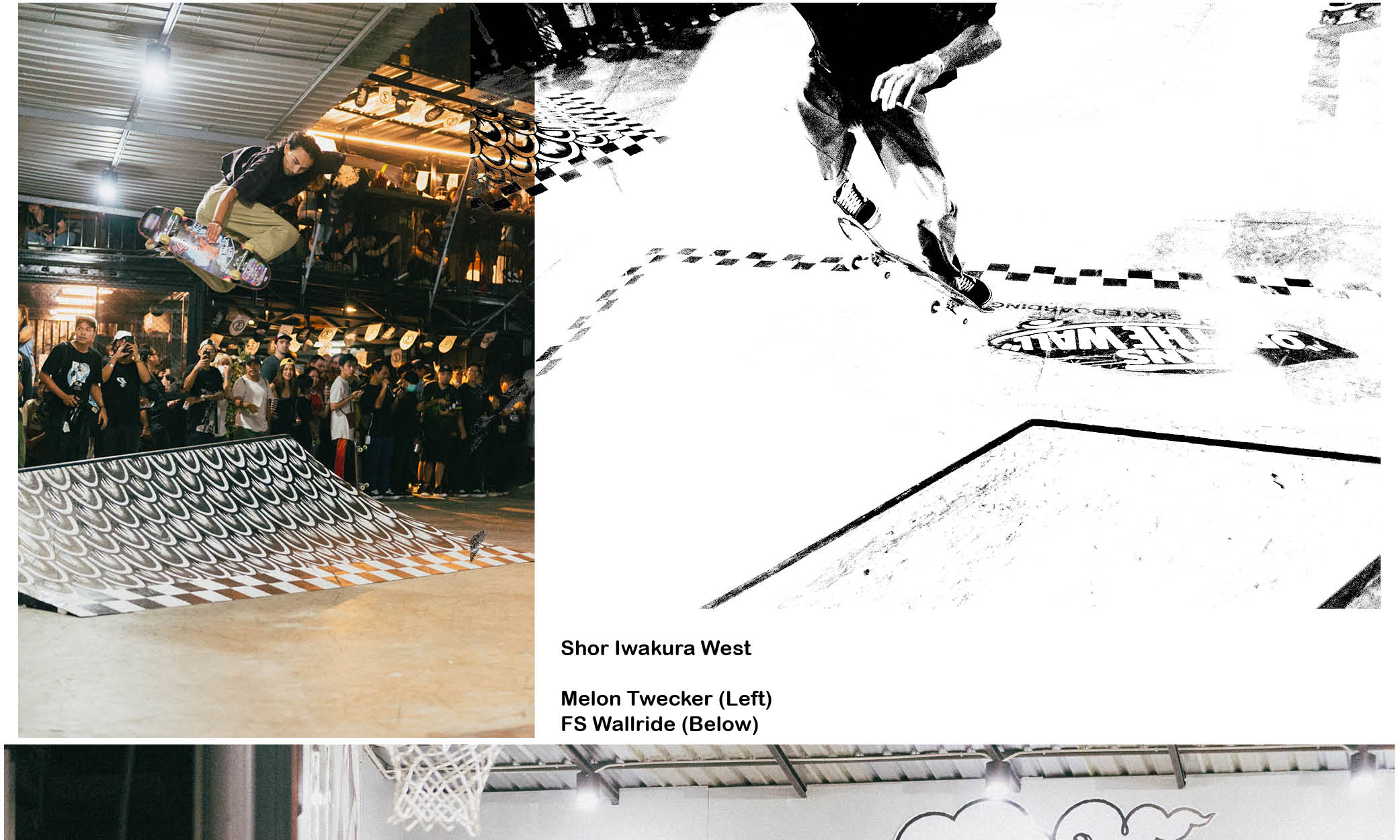 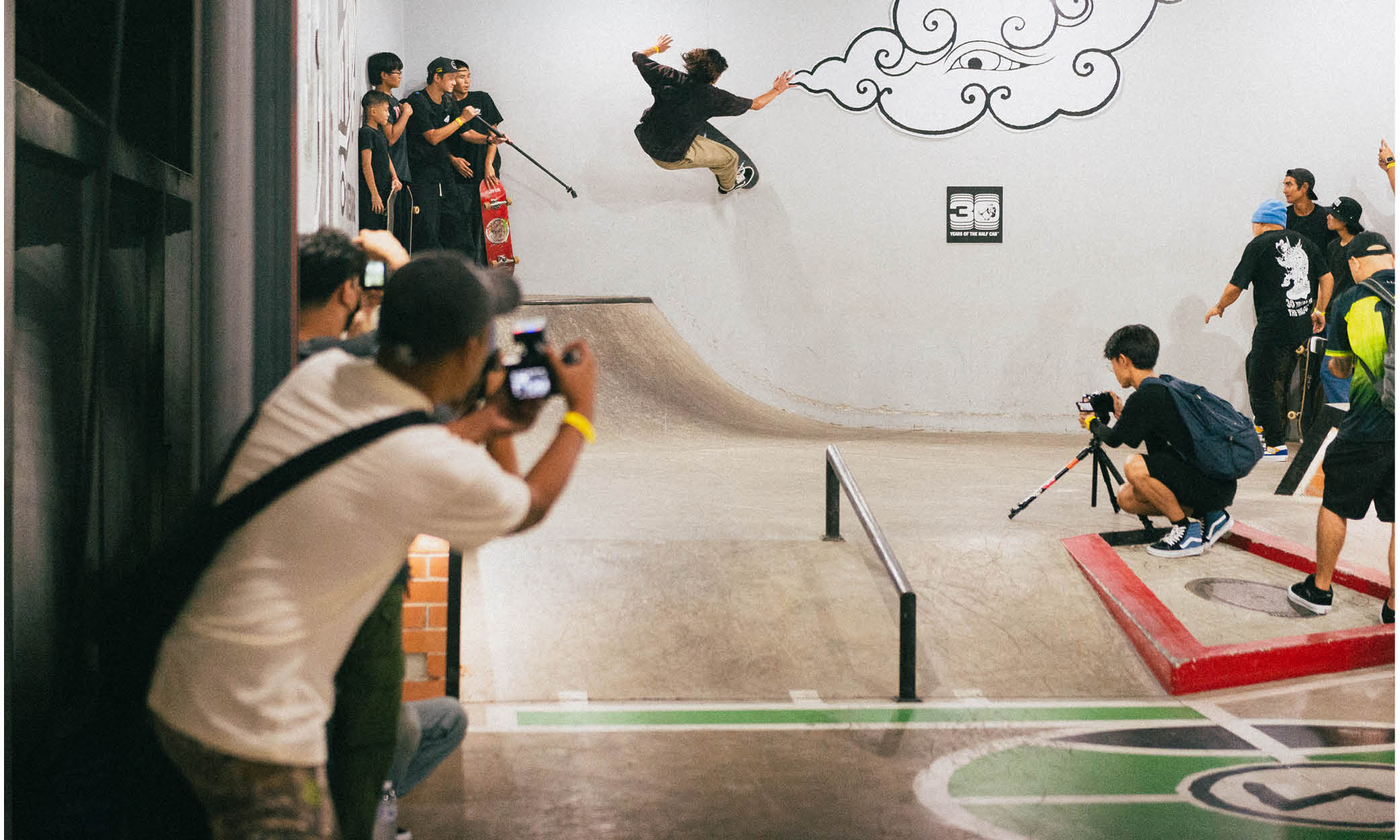 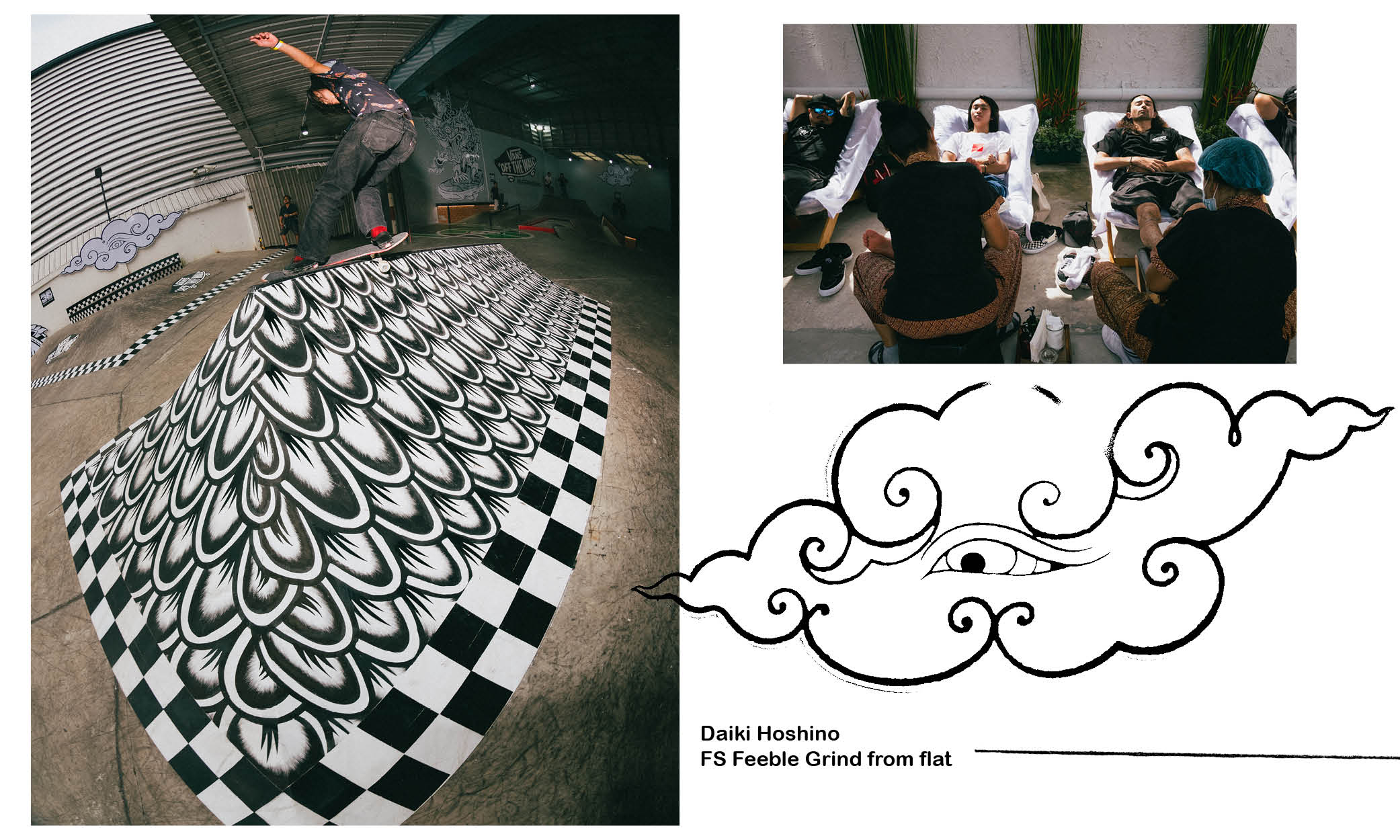 On Friday we were taken out on a sight-seeing day, which was awesome. We took a boat up the Chao Phraya river, before jumping on a fleet of tuk-tuks to the amazing Wat Pho temple, then wandered over to a lavish lunch at a waterside restaurant.

Along for the ride was Cab, by whom we were completely awestruck. Despite our awkwardness and the fact he was constantly being photographed and filmed by multiple media outlets, he seemed to enjoy regaling us with certified gold-plated skate nerd stories. If the conversation lulled for a few seconds, he’d pipe up with something like, ‘Wanna hear a story about the Warped Tour?’ to which we’d all nod enthusiastically while sipping on our Half Cab-branded coconuts. He even tried some deep-fried butterfly cocoons I had unwittingly purchased, which he accurately described as ‘nutty’. 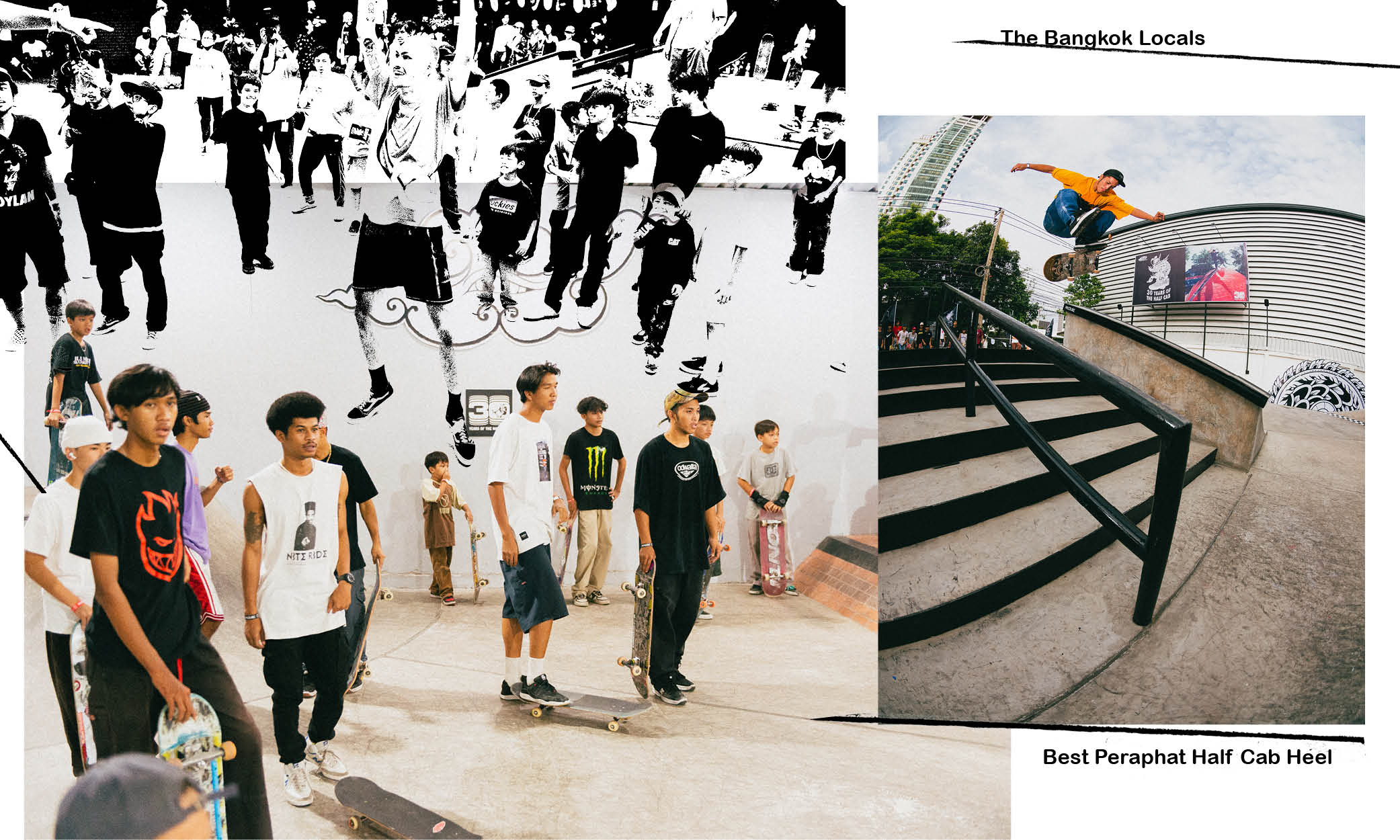 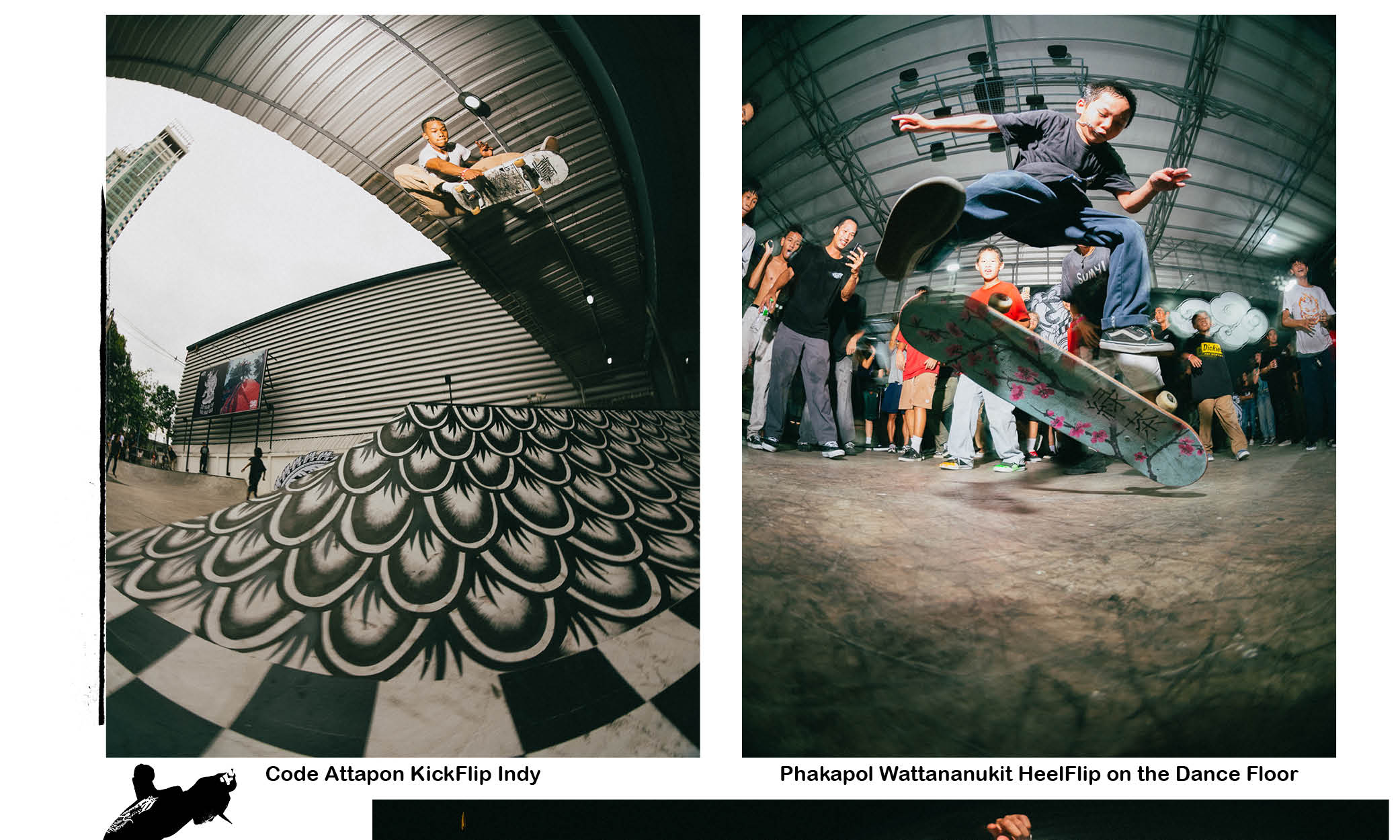 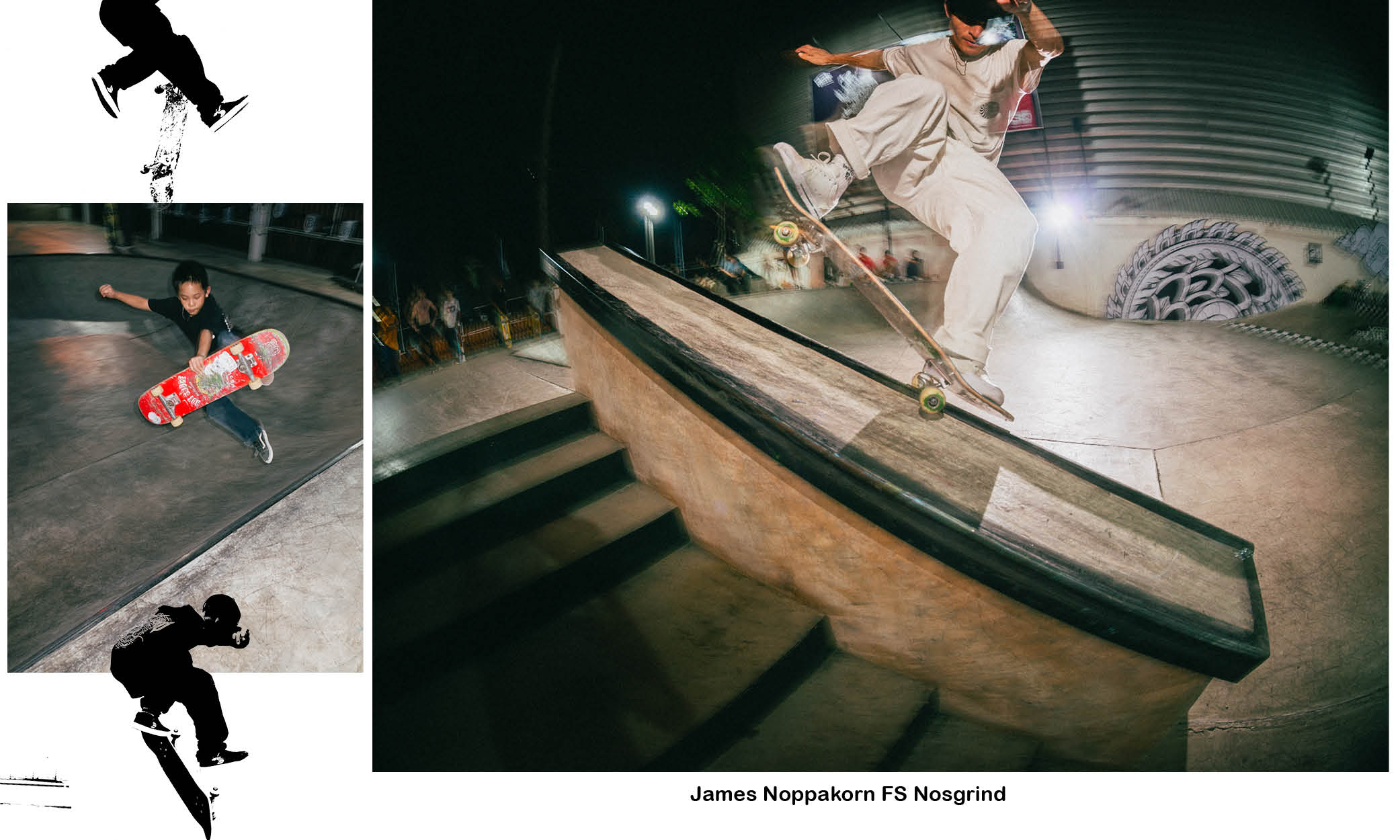 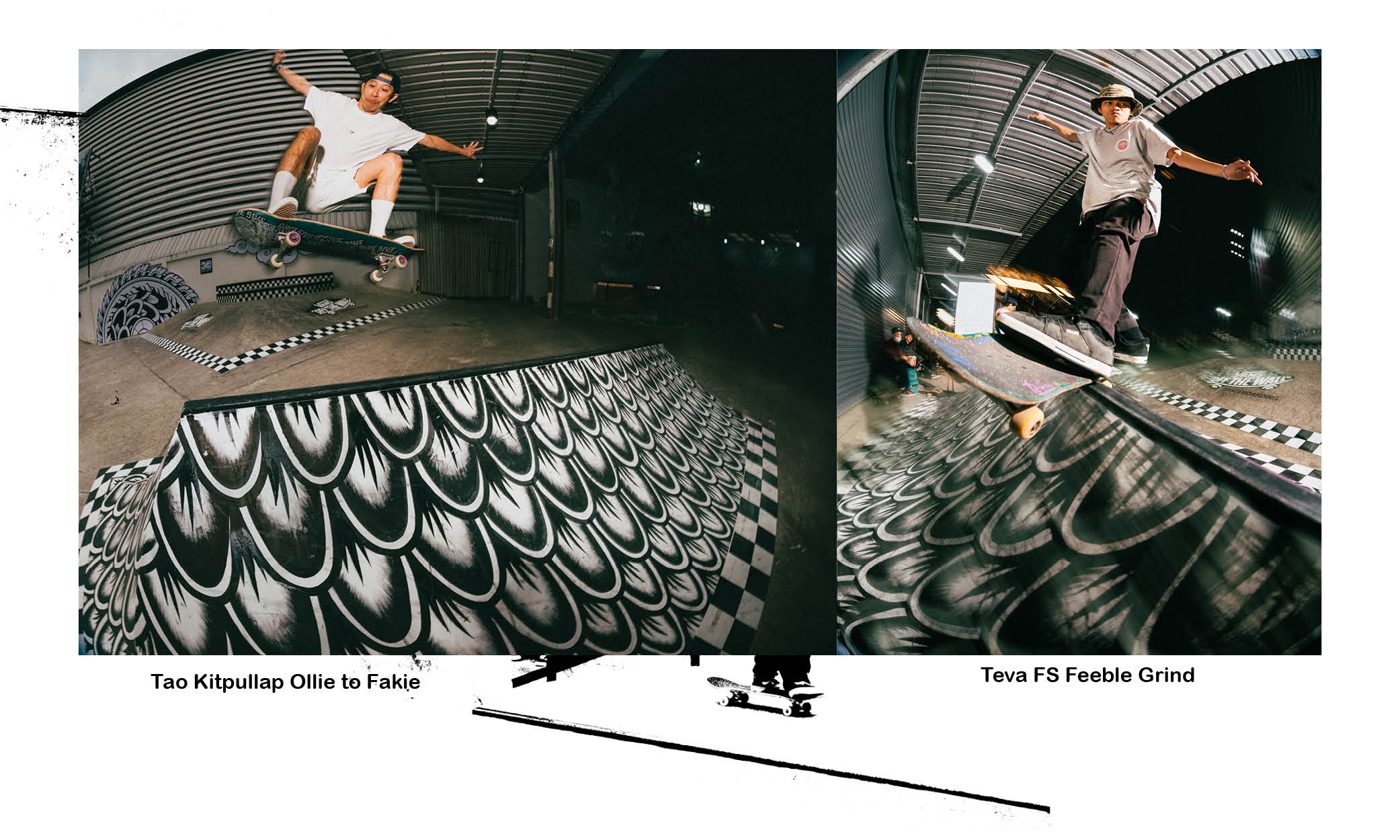 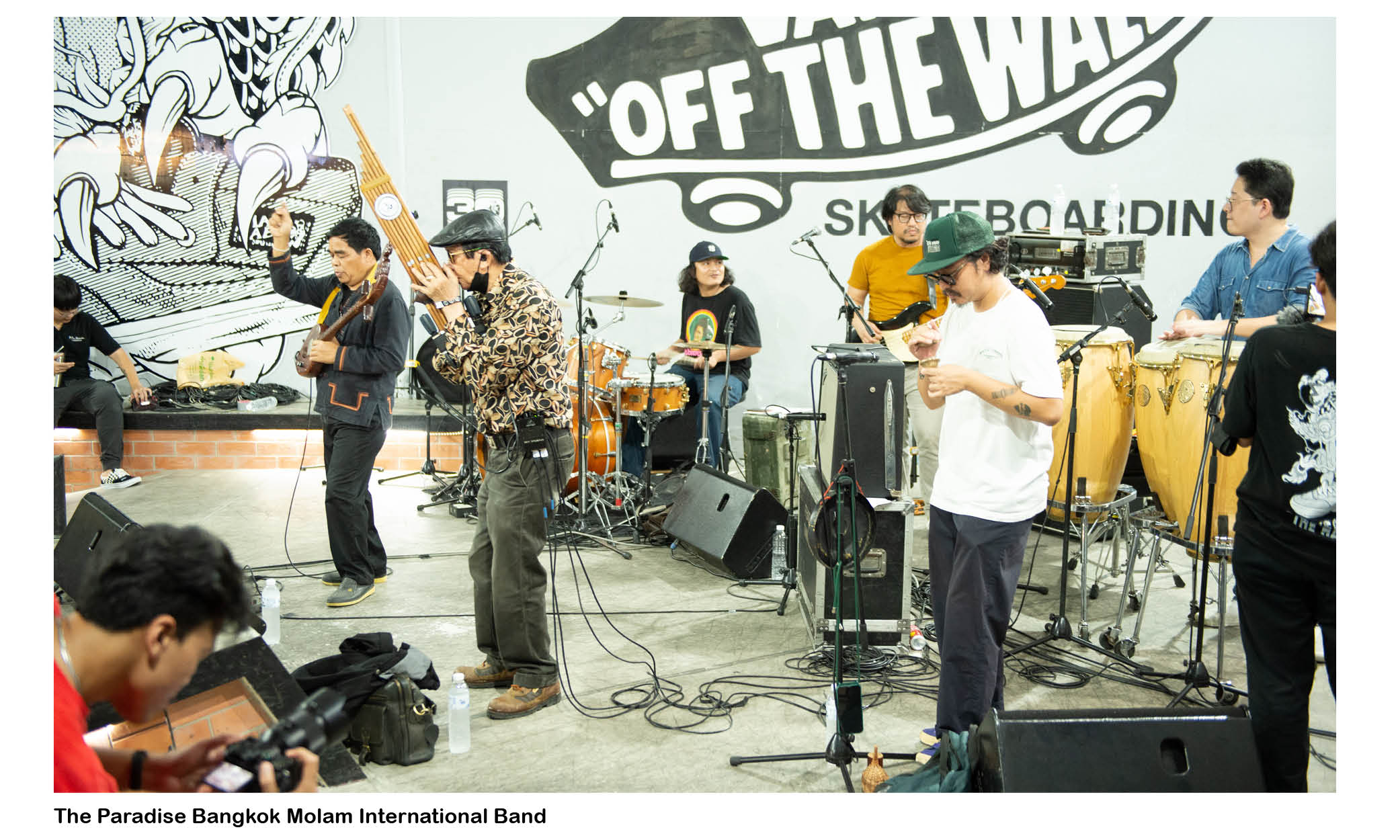 The weekend of events hit a crescendo on Saturday evening with a best trick comp, a skate jam featuring a trademark Cab boardslide, and a live set from the incredible Paradise Bangkok Molam International Band. Afterward, we hit the pool briefly then jumped in a cab to a night market, where we wandered around sampling various delicious foods (the ribs were amazing) and ridiculous shirts. 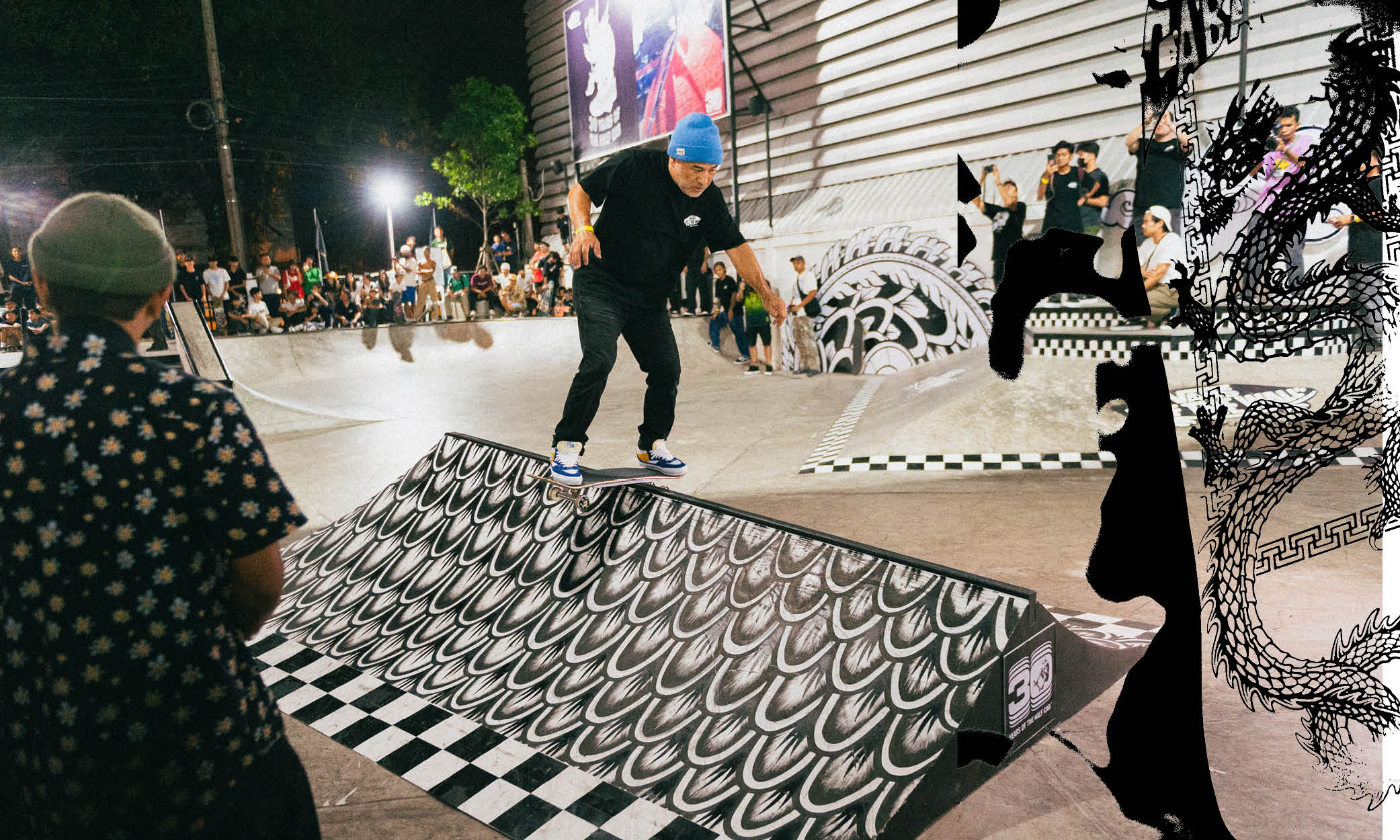 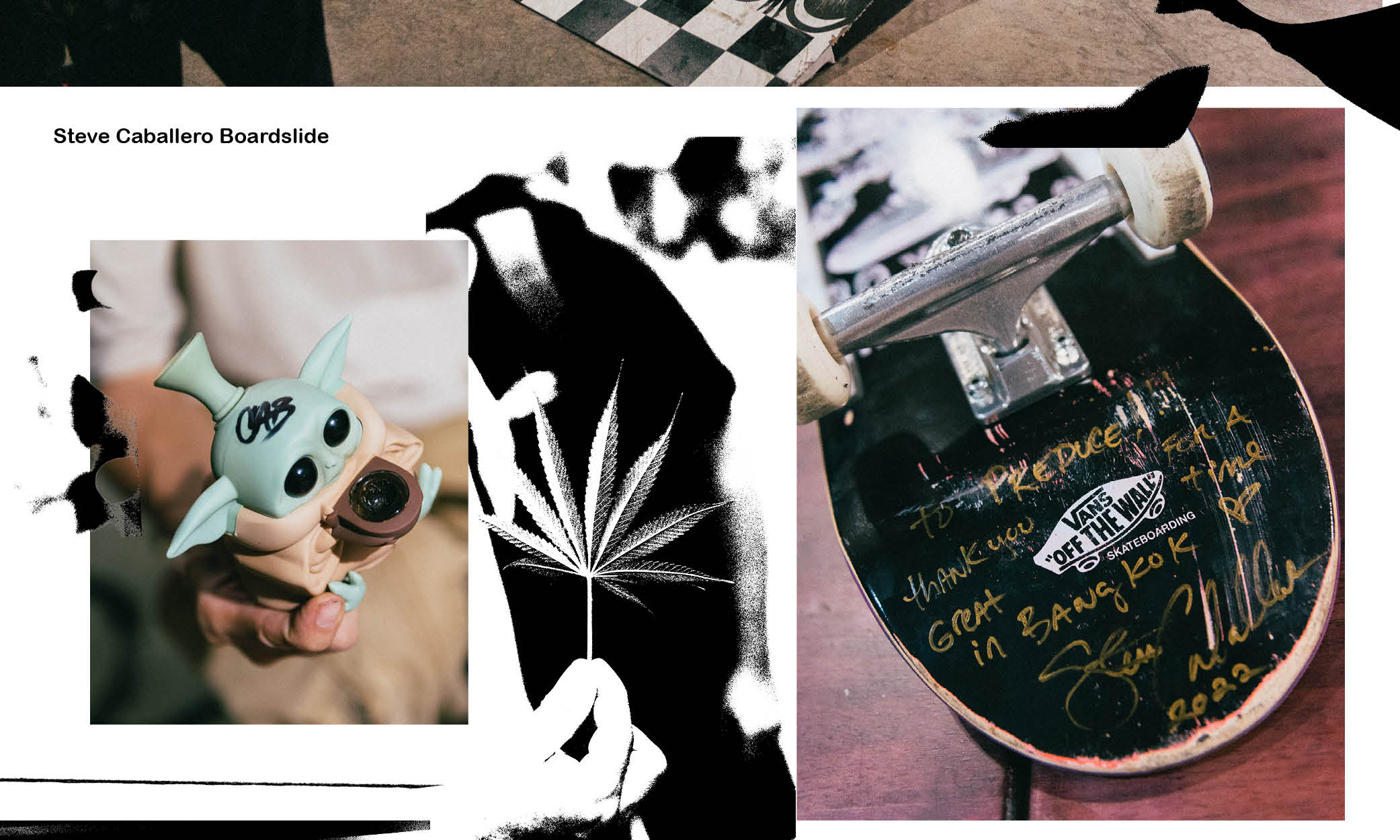 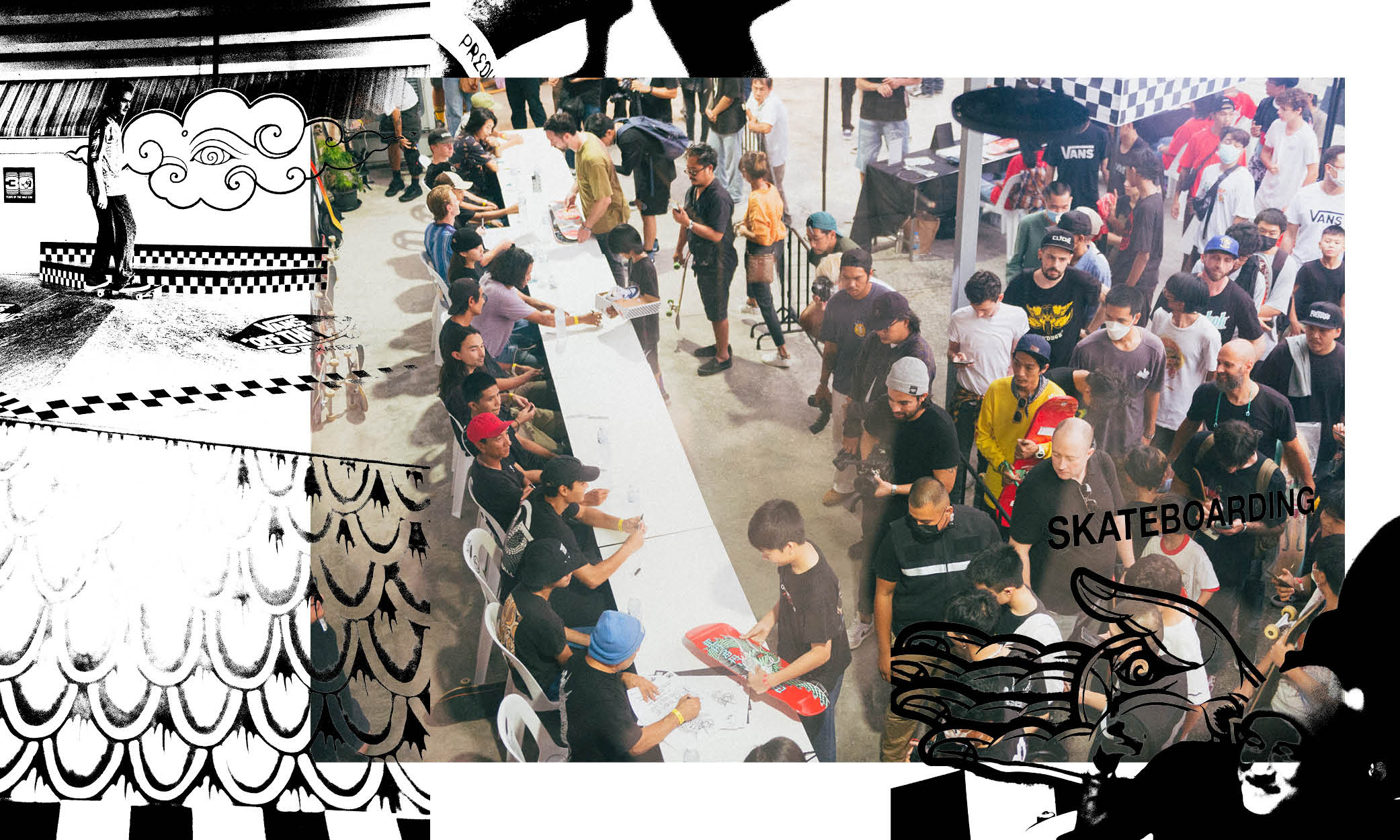 The next morning, after a final buffet, I said my goodbyes and jumped in a van for the hour-long drive to the airport. As we pulled onto the highway, my stomach was gripped by all-too-familiar spasms: I needed to poo. Immediately. The past few days of reckless eating had finally caught up with me. The following forty minutes of deep breathing and rocking back and forth are ones I hope to never relive, but I am proud to report my relief upon finally making it to the airport toilet cubicle was, while memorable and profound, only one of many highlights of what was truly a wonderful trip.

Thanks to Vans Apac and Baan Preduce for their generous hospitality.