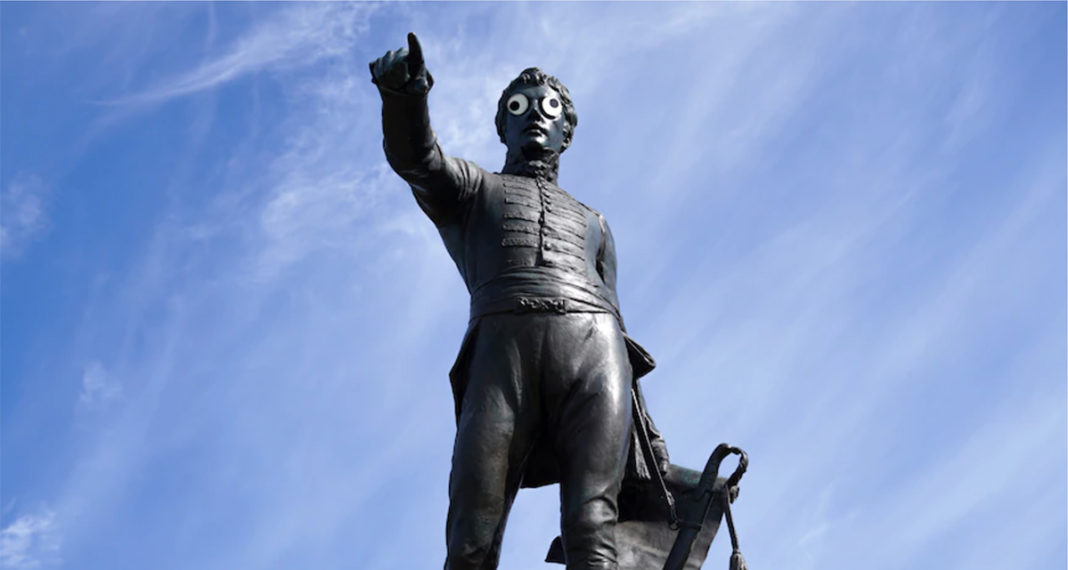 Did you know someone has been sticking googly eyes on stuff in Adelaide since last week? I didn’t, but they have.

Before we get into it, though, I’d like to share a true googly eye story of my own. In 2011, I was at one of those Indian restaurants with all the Christmas lights on 1st Ave, and my friend, Alexander Xavier Burt, super-glued googly eyes onto a teaspoon. We purchased the googly eyes and glue on our way to the restaurant and it was very funny. We’d been drinking.

Flash-forward to 2013, I am back at the same restaurant and—I swear to God—the googly eye teaspoon was still there poking out of a condiment container. Two years later! Can you beat that? True story.

Now, some psychopath—or psychopaths—have been sticking googly eyes all over Adelaide. It began last week when a set was glued to the Colonel’s face at a KFC in Eastwood (above), and then more googly eyes appeared on Jim from Jim’s Mowing, Dan from Dan Murphy’s, and basically anywhere where a big bastard face had been left unattended. This morning the hijinx took a turn for the worse, however, when a statue of Adelaide’s founder, Colonel Light, was discovered with googly eyes glued to his big stupid racist head. Who would do such a thing?

There’s no telling who the mysterious ‘Googly Eye Bandit’ is or are, or when he or they or her will stop, but according to ABC Radio Adelaide reporter Troy Sincock, they’re making a statement with the big googly eyes. ‘Instead of having the eyes looking in the same direction,’ he said, ‘they are looking in completely different directions, as if to say the world has gone mad, what a peculiar and ridiculous situation we’re currently dealing with!’

Interesting theory, Troy, but I think it’s probably more a case of some drunk dickheads buying a bag of googly eyes and having a laugh. Stay tuned.