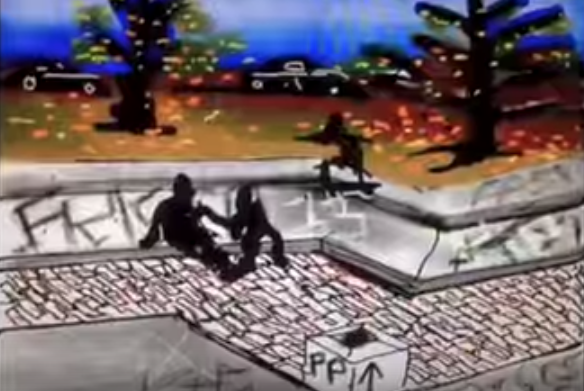 Mark Gonzales, formidable founder of many of the practices that we take as given in the this day-in-age­—like calling yourself an artist, going to Europe all the time, misspelling stuff, and grinds on handrails—has not slowed down.

He’s been uploading three or four videos a week to his Youtube channel, featuring animated iPad art that includes retellings of contest runs from the 80s, music videos to songs he’s written, and some quintessentially Gonzian musings about moments and places, past and present. The Old Embarcadero San Francisco is an animated retelling of the man himself being the first to ollie the gap at Embarcadero, later renamed the Gonz Gap. The events of the day are boiled down to tongue-in-cheek simplicity as dudes link up and Gonz mutters a narrative about “this guy” and “that guy.”  Perhaps a critique of the recent birth of the “skateboard historian” and its penchant for melodrama; or perhaps just an understated version of an important moment in his own life—what it meant and how it felt.

Check his Youtube page for more stuff that he’s made on an iPad, then filmed with maybe another iPad, then put on the Internet. Apparently he is without a phone, and is still yet to do a kickflip on a bicycle. Thanks for everything Chavo, the School of Visual Arts wouldn’t have a pot to piss in without you.