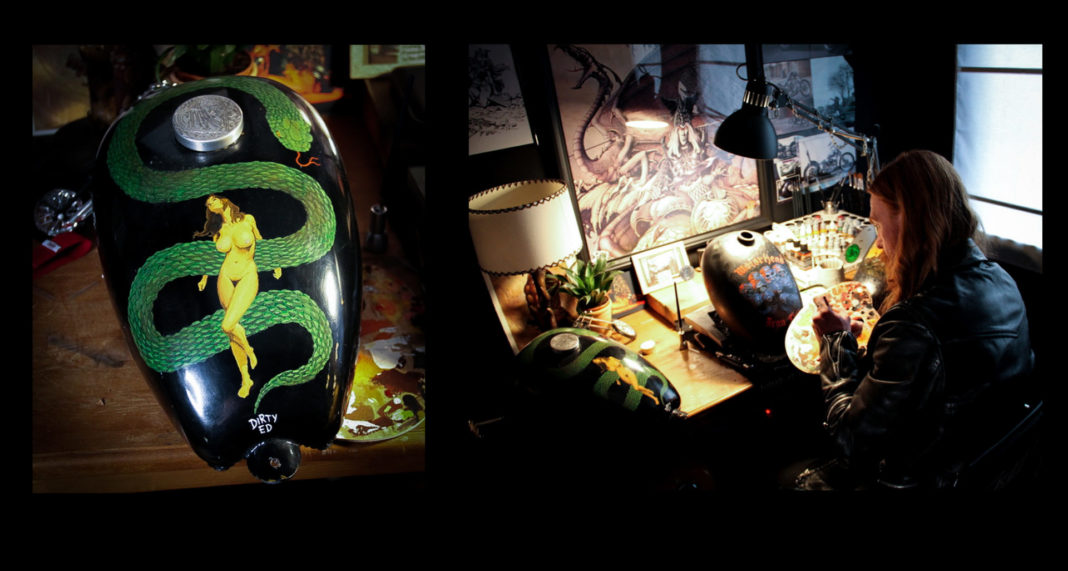 Somewhere right now in Sheffield, England, there is a man hovering over a motorcycle tank with a very small paintbrush.

His eyes hurt, his hand hurts, his butt is going numb, and he’d like nothing better than to climb into bed with his missus and call it a day. But he won’t do that. Do you know why? Because he’s an artist, and artists don’t sleep on their work. This artist’s name is Eddie Beniston—or Dirty Ed—and he’s developing a reputation for his beautiful and highly detailed art. We caught Ed taking a break between tanks and asked some questions. 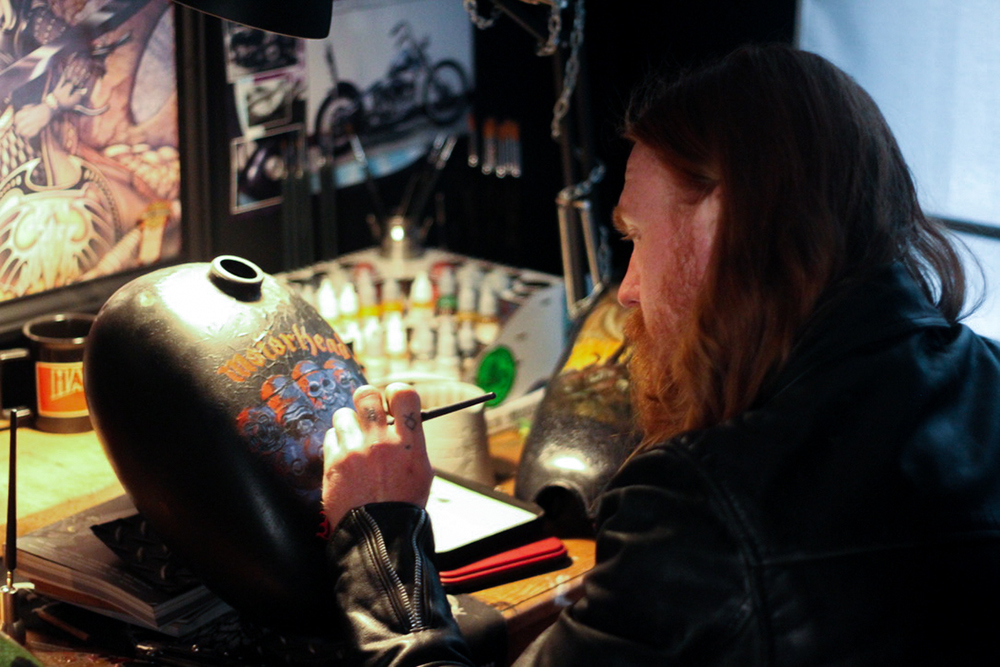 How long have you been a motorcycle enthusiast?

When I was a little kid growing up around the Streets of Nottinghamshire, from time to time I’d hear the roar and thunder of dozens of motorbikesÚ the Local H.A. Club. They were a bunch of gnarly looking hard-nut guys dressed in leather jackets and oil-ridden Harleys. Since then, I knew that I wanted to be riding an old Harley. Social media and various old boys (who showed me wild old British chops and a few Harleys) would spark my immediate interest in Tom Fugle-style choppers, pure artistic expression in the form of metal and paint. Many years later, I managed to get an old 1988 FXRS Big twin Evo chopper and build it into what it is today: a pure, sketchy, chaotic death sickle. 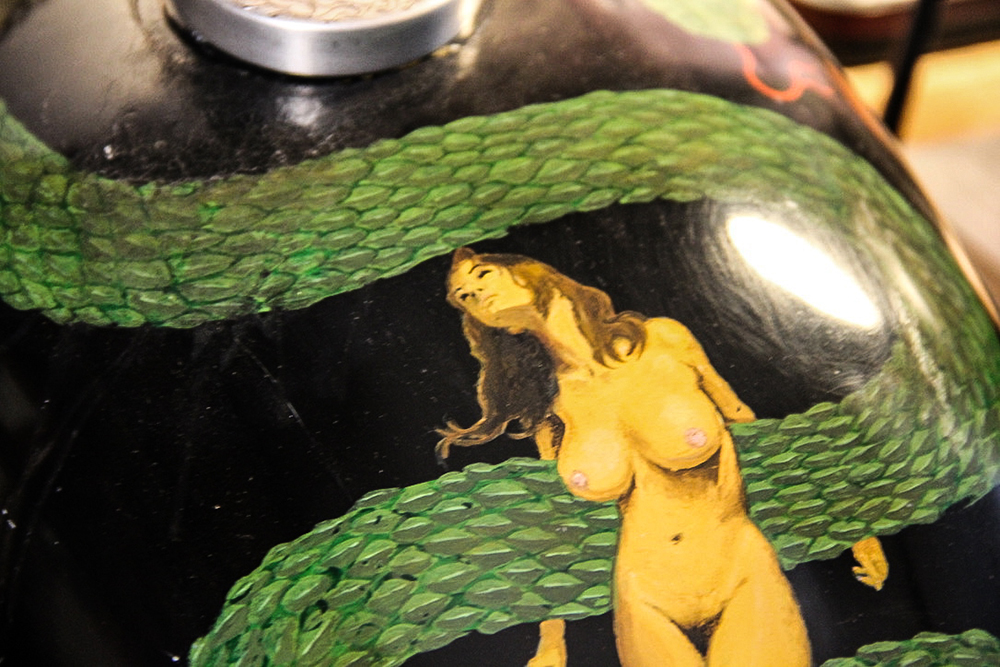 How did you get started painting tanks?

When I bought my first bike, I couldn’t stand the plain boring stock tank that came with it; I felt like it was missing something. I picked up a pot of old paint I had, and a pencil, and sketched out the Emperor self-titled album cover on top of my tank (also known as a Gustav Dore piece). It turned out pretty killer, not to toot my own horn, but, yeah, it looked damn good; from there people took interest and ended up paying or trading me for whatever they needed.

Did you draw as a kid, and if so, did you draw a lot of skulls, snakes, and dudes with swords?

As a kid, I’d draw huge landscapes of made-up worlds, big medieval-style battlefields, Warhammer 40k models, and just pure fantasy. It’s only been five years since I began taking my painting seriously and drawing/painting mural pieces. My style developed and is still developing into what you see today. 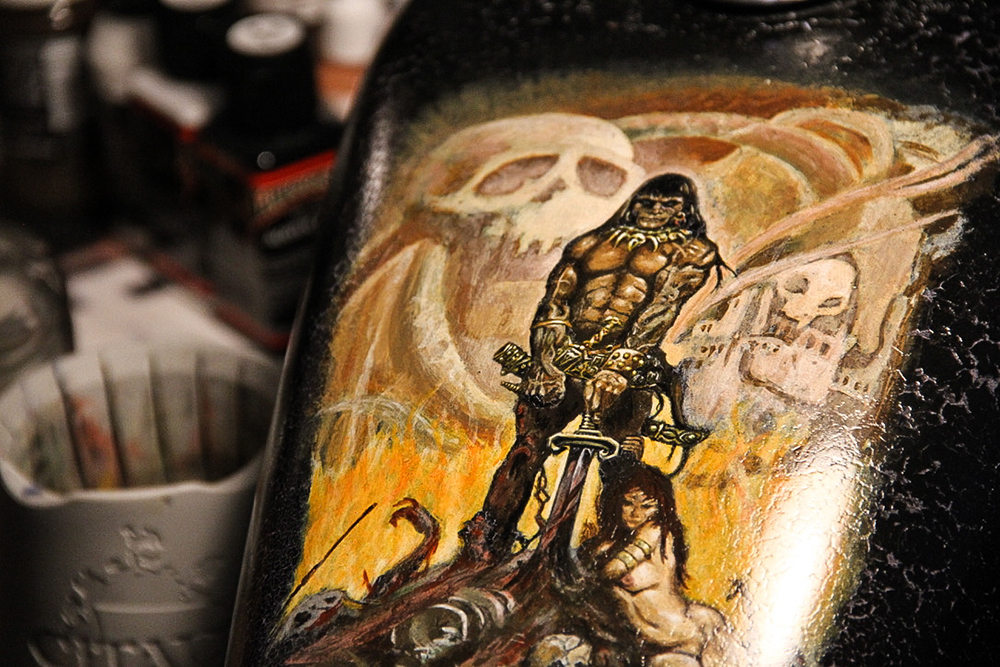 What kind of hours do you put in when you’re painting a tank?

Hahaha! This is a good question. I can spend easily between two weeks to almost a month on a piece. It’s fully hand-painted—no airbrush, no stencil—all done by my hand from initial designs to pencil design on the tank to then painting and sealing. Personally, I don’t think it should take a full month; I work all week at a forge and then in my spare time I either ride or paint. People don’t mind the time, but if I have a deadline for a client I will aim to hit it. 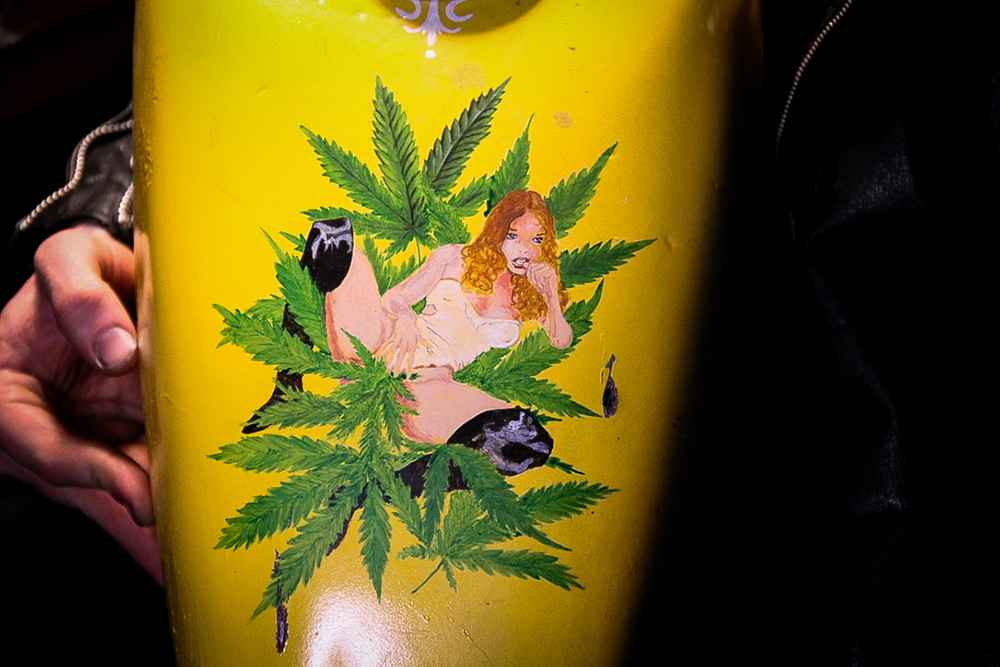 And how are your eyes after a day’s work?

My eyes, hands and mental state use up a great deal of energy when I go through a full painting. I have to take a day or two off after a full piece to get my bearings back. I put so much focus into my work—and blood in the paint of one of my tanks (hahaha!)—that I need to just chill after. I sometimes get so lost in a piece, especially using extremely fine brushes, that it’s a slow process for me to finish, due to the strain on my eyes. Every second is worth it though. I love what I do.

I’m gonna guess and say David Mann is one of your influences, but who else inspires you?

You’re right there, Dave Mann is very inspirational to me, but not necessarily my art style. Artists like John Howe, Dan Seagrave, Gustav Dore—who I mentioned before, Eugène Delacroix, Burney—a.k.a Batdog, the legend Frank Frazetta… There are many more—hundreds more—whose work I’m constantly surrounded with and who inspire me to create wild fantasy pieces. I sometimes look for concept artists who design pieces for games and movies, and end up down a rabbit hole, looking at work that is far different from my own but still gives me a different aspect and angle to look at approaching my own pieces. 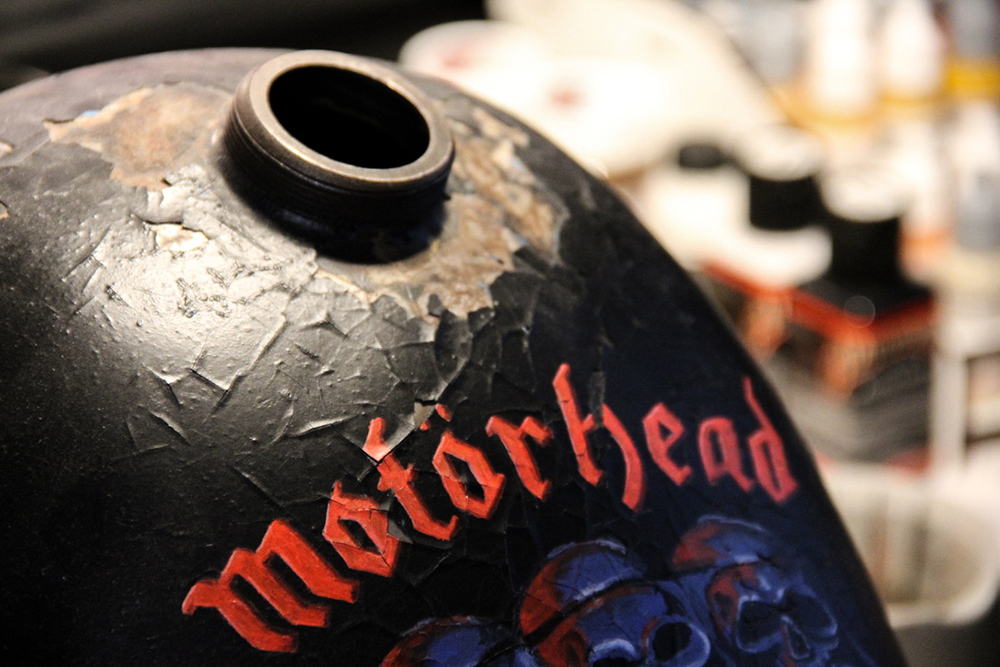 When someone commissions you to paint their tank, do you go through sketches and figure it out the same as when you get a tattoo?

Usually, I’ll speak directly with the customer and ask them what they want exactly. Sometimes they have reference images or just describe what they would like, and I then draw up multiple ideas and rough drafts until we come to an understanding of what it is in their head. Once they’re happy with what they see before them, I can then draw that directly onto the tank and begin my work. 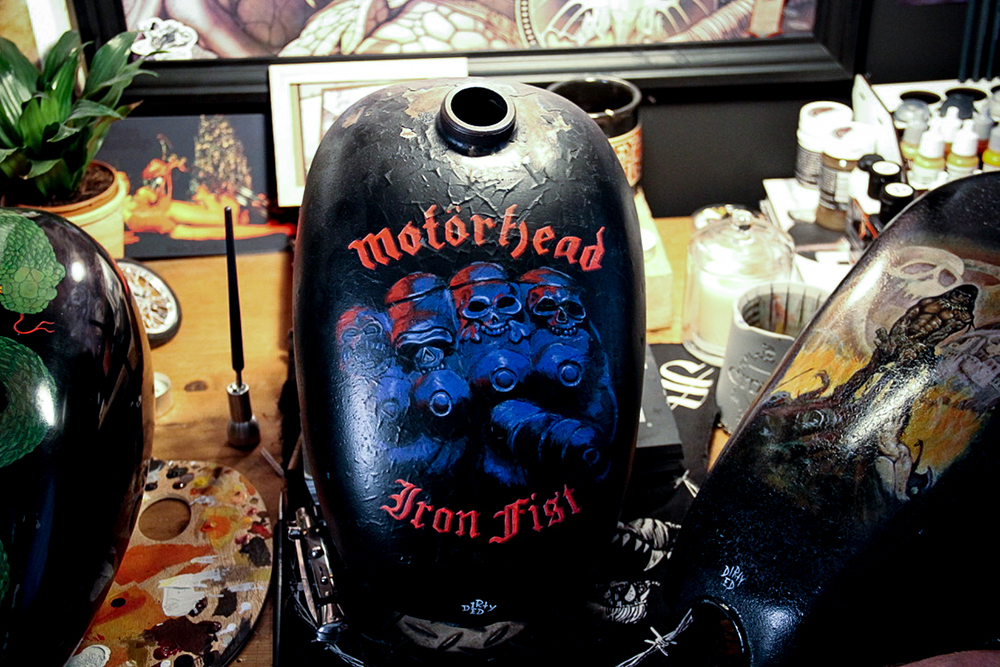 What’s the best part of what you do?

I stopped painting after I dropped out of school to peruse a job and chase money… The fact that I am now returning to what I did when I was a kid and growing and becoming a better artist truly fills my heart. It wasn’t all a waste, and people genuinely like my work… well that’s what they tell me (hahaha!).

I’ll let you know when that part happens. So far so good; no bad parts yet. 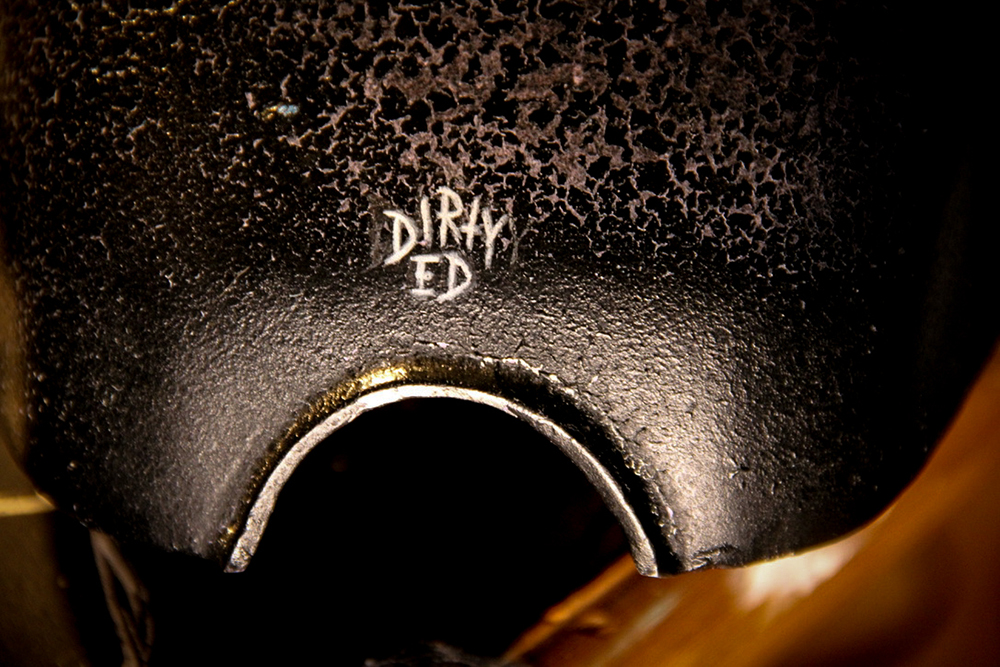 What are you gonna go do now there are no more questions?

At this moment I’m strapping my bag and my tent onto the back of my bike and getting ready to head out to camp with a bunch of friends. Gotta make the most of these times. 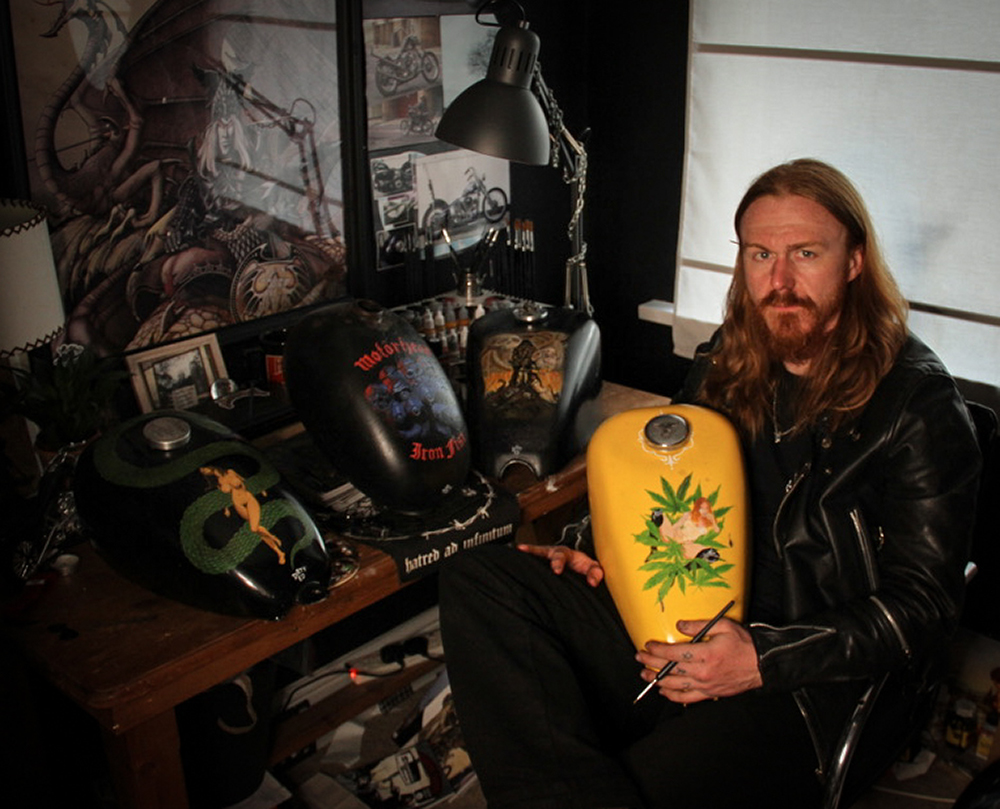