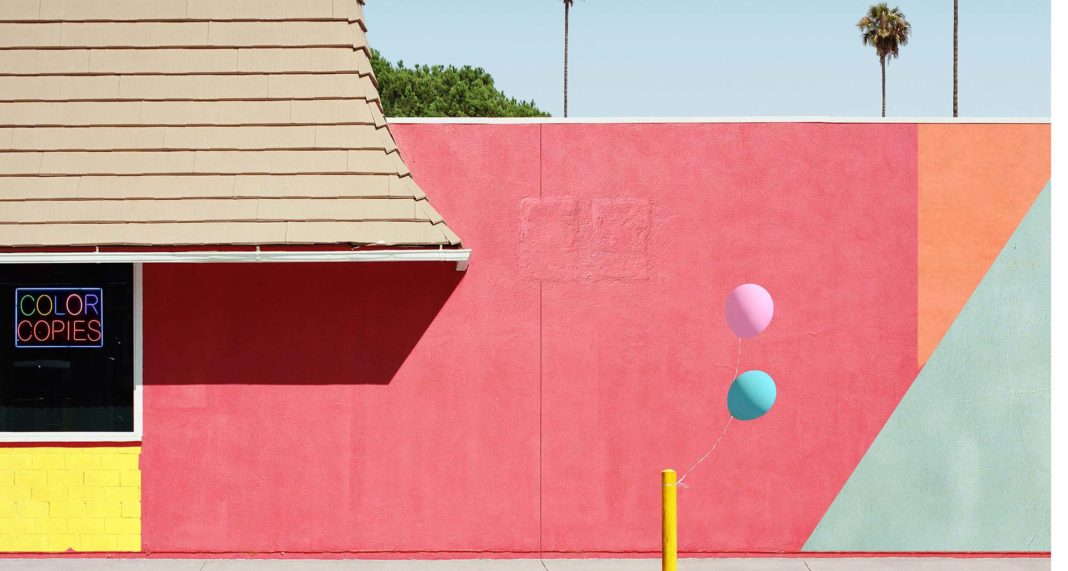 Sydney-born, LA-based photographer George Byrne has returned to our shores with his new exhibition, Post Truth.

For this latest series of work, Byrne has embraced a new creative process, using photo-assemblage (or simply ‘collage’ to the less refined) to create semi-fictional landscapes from multiple perspectives. Think Google Street View, but with M.C. Escher creative directing. Before the show officially opens next Friday, February 8, I asked the disciple of shadow and shape five very pressing questions. From artistic process to George Orwell to the greatest basketball player of all time, here’s what the man behind the lens had to say. #striveforgreatness

Can you talk us through this new process of photographic collage you’ve used for this show?

Yes, absolutely. The images for this exhibition are not straight photography—some of the images are made up of multiple locations that I blended into one. For example, the image called Desert Pit Stop, 2018 is an amalgam of three different film negatives taken from very different locations. So, each of these images is a creation as much as it is an observation.

The show is called Post Truth, and ain’t we living in it. What’s the story behind the exhibition’s name and concept?

Post Truth was actually the working title, and it stuck. It’s pretty all-encompassing really. Firstly, the images exist between photography and painting, real and imagined. I was also influenced by the political and social climate in the US, the country is in the midst of a cataclysmic culture war, people exist in a different version of reality. It’s like a George Orwell novel come to life. I guess I was hoping I could bring something hopeful and inspiring to an idea that, in a broader sense, is a bit terrifying.

Do you think any differently when it comes to putting together a show in Australia vs America?

Hmm, no, not really. I just serve up the same tucker and hope for the best.

Delicious. Do you find it hard to relax if you’re walking through a new neighbourhood drenched in sunlight and dancing in shadow sans camera?

Impossible WYR: Would you rather only see in black and white OR never be able to take a photo again?

Absolute no-brainer, I’d quit photography and get into painting. Seeing color is one of life’s great pleasures.

I am no expert but I don’t mind having a swing at this. LeBron James and Michael Jordan are the two best basketball players of all time, by far. But they are hard to compare, as they do very different things and hail from different eras. Kind of like comparing that new 2019 Lambo SUV (LeBron) with the top of the line 1994 Porsche 911. My personal preference is LeBron, as I’ve watched him more and followed his career. He is just such a spectacular athlete to watch. I also like how he has used his profile to address some very important social issues. #striveforgreatness