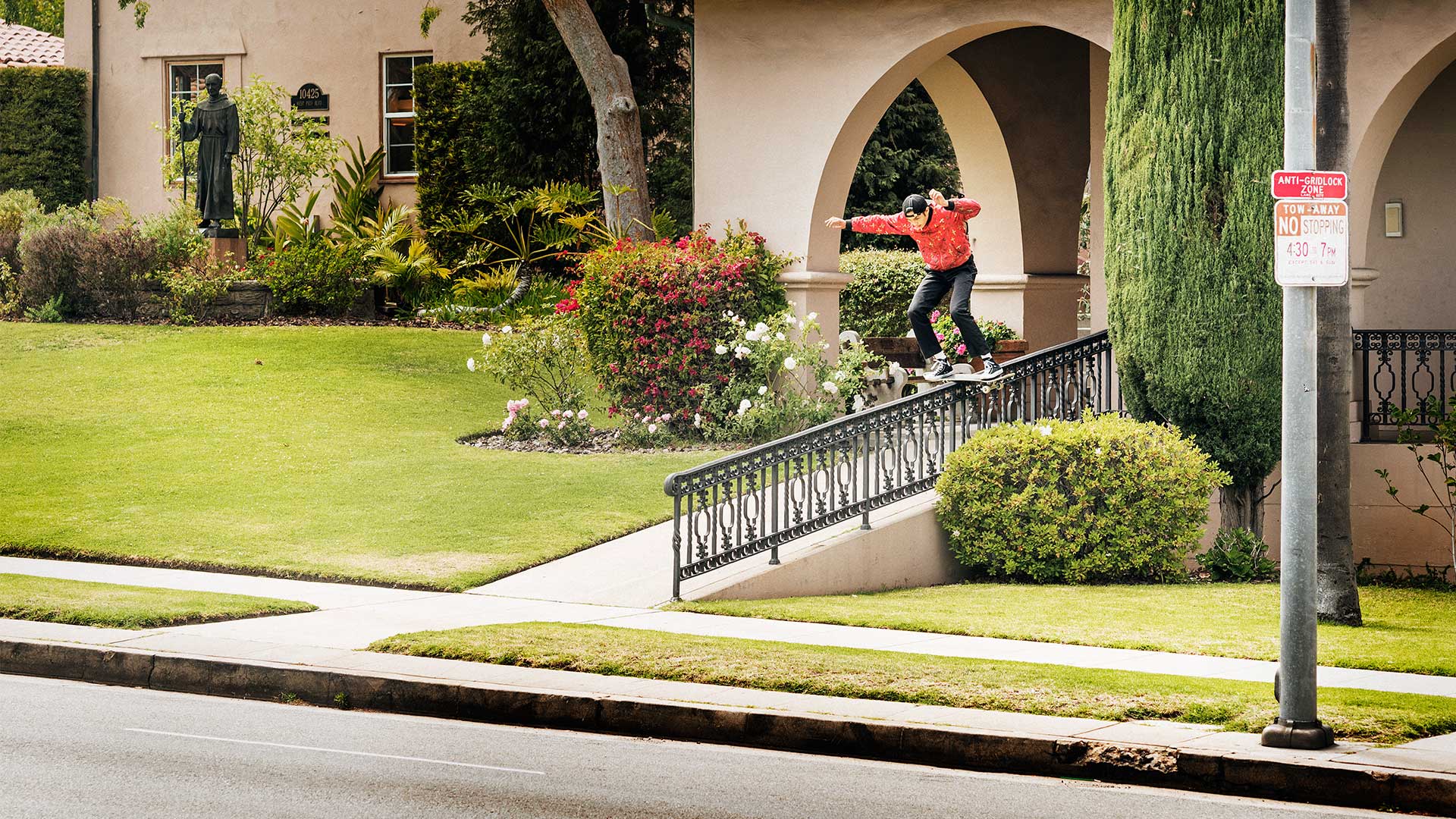 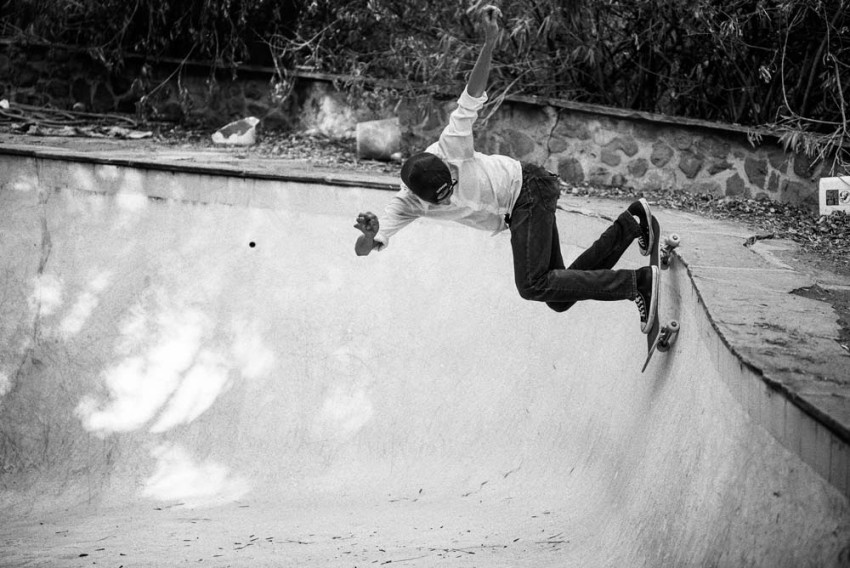 For issue #49 of the mag, Dylan Rieder interviewed Sean Pablo over the phone, and we’re publishing it here. To see it in the flesh, buy the issue here.

Ever wondered what a typical phone conversation between a pair of pro skaters might be like? It kept us up at night too, so we asked Dylan Rieder to call up FA rip-rat Sean Pablo and record it. Turns out they talk mostly about Uber, coffee spots, Paris Fashion Week and not knowing what the fuck they’re meant to be talking about. Put on ‘Telephone Line’ by ELO and read this.

Sean Pablo: What’s up? What are you doing? I am in Paris with my friends. We’re at dinner.

Who’re you with while you’re out there?

I’m with Bill [Strobeck], Sage [Elsesser], Todd Jordan and Ben Kadow, and we are out here filming, skating and hanging out, and having fun.

You just got there, right?

Is the weather nice?

Yeah, the weather is beautiful.

Are all the pretty girls out?

You’re a little late. Ha ha! I know. I know I’m a little late on that. I kind of blew it. But that doesn’t mean there are not hot chicks walking around; it’s, like, pretty insane…

And Monster Children are homies, so. So did you shoot photos for the mag? Is that why we’re doing this interview?

They did a little interview with me that was just skating, and then they showed some of my photos that I shot, too. Not skating or anything, just random shit.

Photos that you shot?

Yeah, from a little random zine that I made a while back [Teen Stabbing].

Did they already put that in the mag? Or is that coming out with this interview?

No, I made it already. It was just a little fucking paper zine. I just printed a couple out and sold them, and then Monster Children ran the photos in an online article. But it was like a book, you know? Like a printed zine, or whatever.

That’s cool. What was the inspiration for that?

So that was sort of your inspiration for it?

That’s cool. What camera do you shoot with?

I shoot with an Olympus Stylus Epic.

Yeah, it’s pretty cool. It’s like the one Dill uses too. A little point-and-shoot.

I wanna see that zine.

I don’t know if I have any more copies. I gave Dill a copy. They’re lying around. I’m gonna make a new one soon. I’ll get you one. 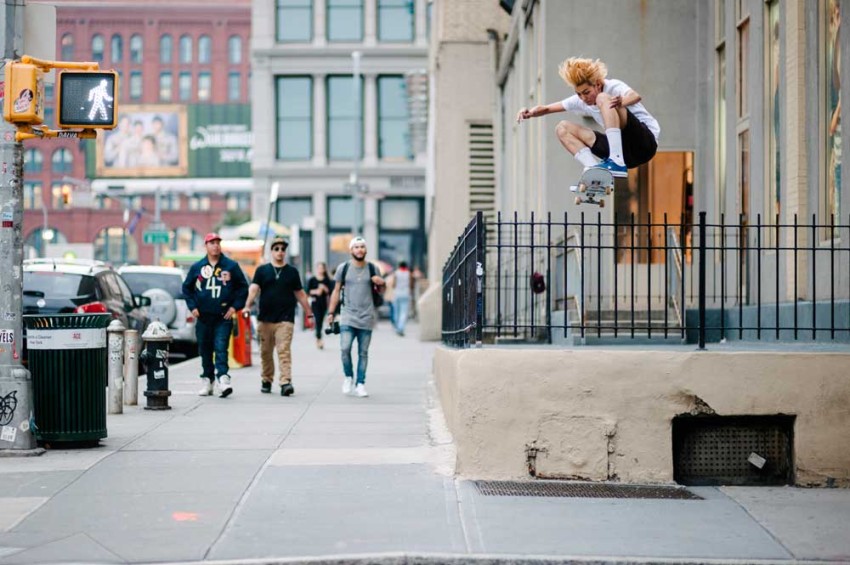 Sweet. Umm… what else was I going to ask you… Has anyone asked you about riding for FA? I did no internet research for this.

Did anyone ask you what it’s like to have Jason Dill as your boss?

I said, did you get asked what it’s like to have Dill as your boss?

I’ve been asked that before, for sure.

But that’s a good question, ’cause Dill is not only a boss but also he wants to, like, mentor you. So he’s basically like a life coach.

He is a life coach. I’m sure you’ve had the same kind of relationship with Dill.

Yep, he’s like my older brother. He and AVE.

They’ve been with me for a long time.

Yeah man. I mean, I’ve known him [Dill] for a while. When I was a little kid I fucking met him and then I didn’t see him for a while, and then I ran into him a couple of times, and that was right around the time that he quit Workshop. I was skating with Sage a lot and that’s kind of how that came about. He called me up and was like, ‘Yo, I’m quitting,’ or whatever.

Were you going out to New York to skate with Sage, or was Sage out here a lot skating in LA?

I was actually in New York at Sage’s sister’s house—that’s where we were staying. Then Dill called me up and told me everything, how he was going to quit and start a company. Basically me and Sage and Aidan [Mackey] were the first kids on, I think.

I don’t know. Maybe… probably just, like, a thrift store, if they had a little coat or something?

You into thrift shopping—second-hand stores and shit?

Yeah, that’s pretty much where I get a lot of my stuff. And maybe I’ll have Supreme send out some stuff. That’d be pretty cool.

I wouldn’t be surprised if they did that. They don’t have a Supreme in Paris; I think they’re opening one, though. Maybe. Actually, I don’t know if we should talk about that or not. 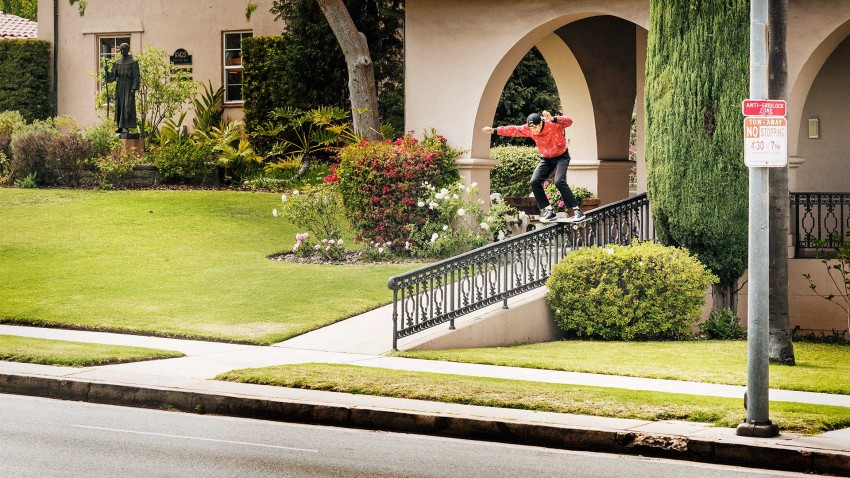 What about your clothing line, Paradise? You guys don’t make jackets?

We actually just started making jackets. I only have one coming out this season; it’s pretty thin, like a work jacket. A Dickies work jacket. I don’t know if that would work too well for this weather, but I think coming up soon I’m gonna have more shit—more cut-and-sew and shit like that.

And that’s with Paradise, is that what it’s called?

Yeah, it’s called Paradise [PARADIS3]. There’s some new shit coming out this Friday. There are some new t-shirts and what have you.

It’s gonna be in Supreme and stuff.

I like all of the stuff you’re doing. I like the palm tree with the guy hanging himself.

Thanks. It’s coming along, man.

Sick, man, I’m stoked for you. I really like it.

Thank you. I’m gonna send you a box.

Yeah man, gimme that. I want a jacket. Still hot as fuck here—it sucks. I wish I was in Paris with you guys.

Dude, I wish you were here too, that would be sick. 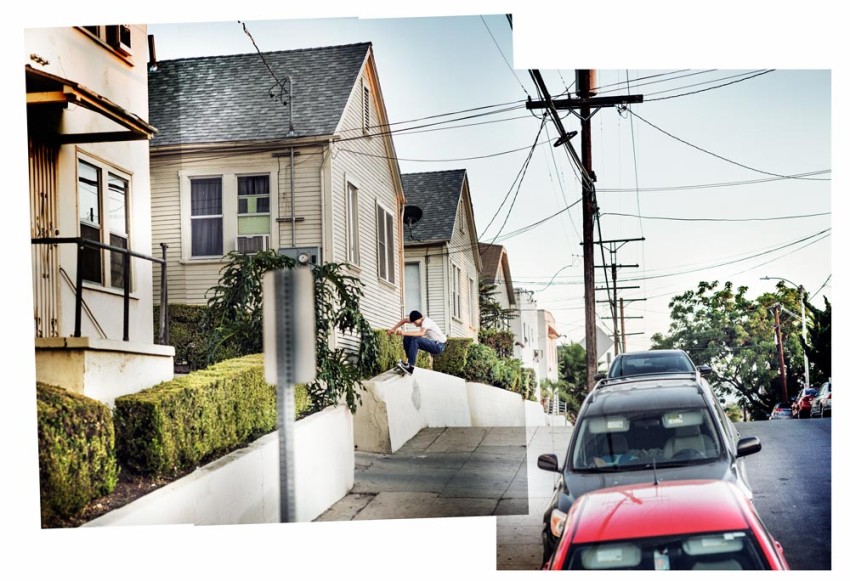 You know we’ve been talking for twelve minutes? What else do we want to talk about?

Yeah. What is your favourite tre flip?

I like your tre flip. I watched a good video of you I’ve never seen. IC2 [Illegal Civilization 2], is that what it was called?

Yeah. Is that new?

That’s an old part. That’s me, but that was when I was younger, yeah.

I was into it. You eat shit on a kickflip and it was kind of awesome.

Yeah, dude, you went down.

Ha ha! It looked worse than it actually was, though. Still pretty ridiculous.

I’ve been watching you fucking skate for the past, what, five years or something? Four? Five?

And all of you little fuckers have gotten so much better, it’s crazy. You, Sage, li’l KB [Kevin Bradley]… You guys are all fucking ripping. What are you working on right now? Is that why you guys are in Paris filming stuff?

Yeah, we’re doing a video in Paris. It’s a Supreme video, I guess like what we did in SF? We’re just going to make a little video out here. We were filming today and are pretty much going to be filming for the next two to three weeks out here. It’s cool.

Awesome. And where are you going after Paris— you coming back home?

I think I’m going to come back home. I miss LA a lot, and I haven’t been there in a while.

Ha ha! I want to come over to your place; I haven’t seen it yet.

Yeah, you gotta come and hang with me and my fucking mini horse. How many times a day do you Uber to Stella when you’re home?

There’s that new coffee shop in Echo Park. I’ll just take the bus up to Echo Park—that’s straight down Sunset.

I walked by there the other day, I was tripping. I didn’t know it was there either. I was going to the Echoplex or something and I saw it and I was tripping out how big a spot a fucking coffee shop had.

Blue Bottle is pretty good, though. What other locations can people find you at, hanging out in Silver Lake or the Hollywood area?

I don’t know, Supreme probably. Or… I’m at Supreme a lot, more than I want to be, because we kinda just go there when we don’t have shit to do. 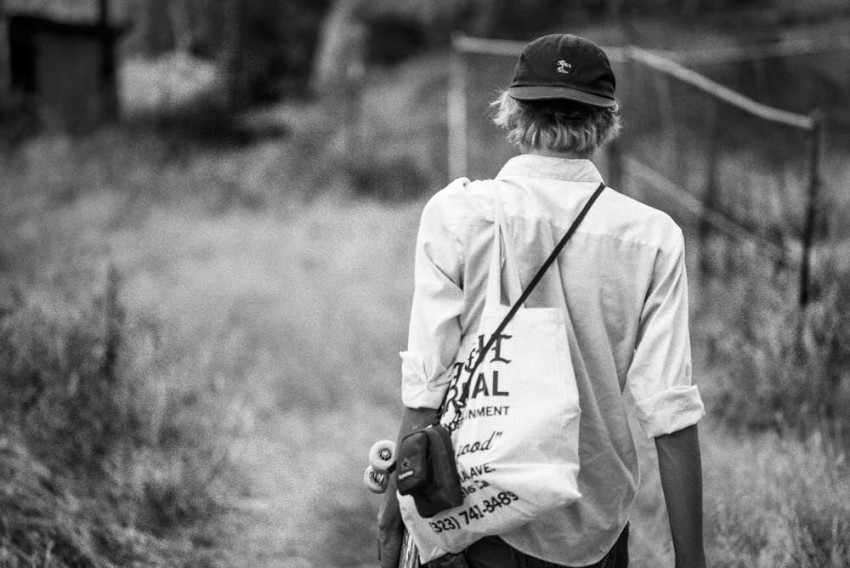 How do you get to Supreme?

Yeah, I’ll bet you take an Uber most of the time.

Yeah, most of the time… Well, I don’t drive, so… It pretty much adds up to the price of owning a car, I bet.

I do have a problem, though.

I was having this conversation last night with a girlfriend of mine who’s trying to get her drivers licence because she just moved out. She just bought a house in LA and she failed the written test, so she’s over it and she’s just going to get a private, personal driver. She’s going to hire a personal driver to drive her around wherever she needs to go. I think you need a personal driver.

I think I do. I think we need to hook that up.

Maybe you can pay me to drive you around in the Jag. We’d look pretty cool. I’d wear a chauffeur hat and suit and shit.

You’d wear a suit, pick me up at my house and drive me to go get coffee. You buy me, like, a nice Prada suit and I’ll wear it every day and just drive you around.

All right, I think that’s good. I think it’s going to work out and I think we’re going to stop this interview right now after that, ’cause I gotta go to this festival in San Diego.

That was fine. Short and sweet.

I don’t know anything.

Yeah, fuck it. Well, have fun out there, man.

I wish I was there.

We haven’t hung for a minute, man. You should come out here; I don’t know what your schedule is like…

How long you out there?

I’m going to be here for another two weeks.

Damn. Maybe I’ll come meet you guys for a week or so… Is it cold?

Maybe I’ll come meet you guys. I’ll check how much tickets are.

All right, man, tell Bill and Sage and Ben and whoever’s out there that I said what up. And you get some fucking radical manoeuvres and if I don’t see you in the EU I’ll see you in America. 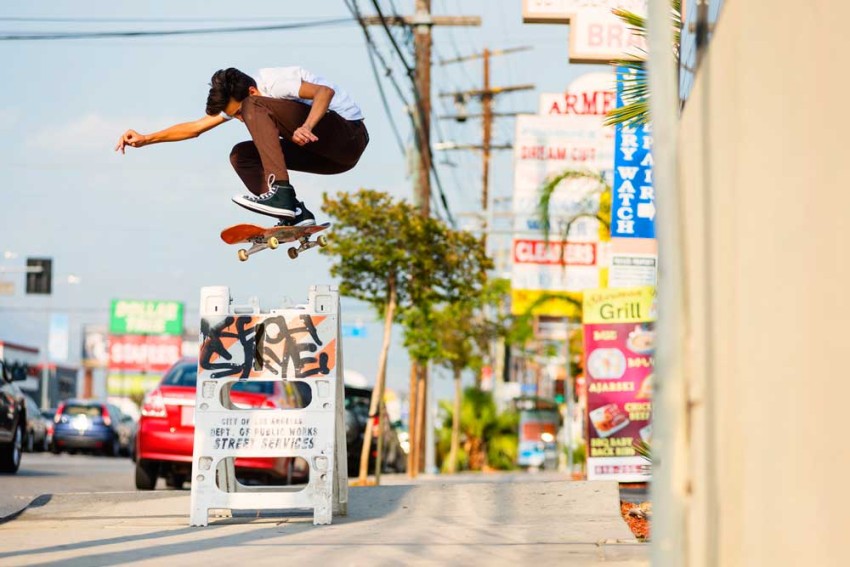