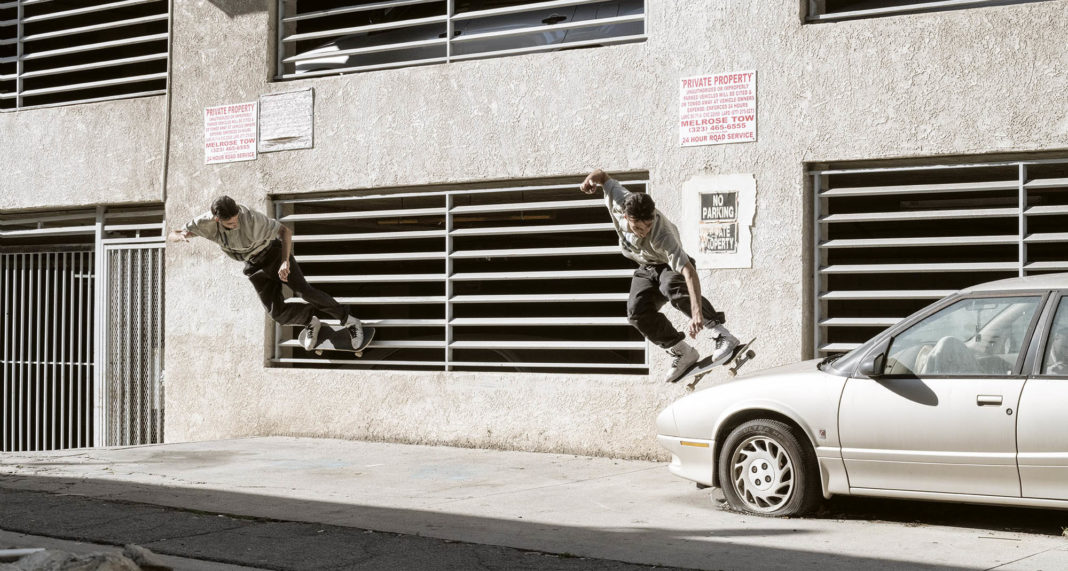 Rémy Taveira was always a bit of a mystery to me.

We have a lot of friends in common and he’d come up in conversation as though I should know him even though we live on different sides of the world. Nevertheless, I’d heard that he was a good bloke. For a decent stint this year, Rémy escaped the tighter lockdowns and curfews in his hometown, Paris, with a skateboarding vacation to Los Angeles where we managed to get out in the streets a couple of times to shoot some photos. Turns out the rumours were bang on: Remy is an absolute legend. 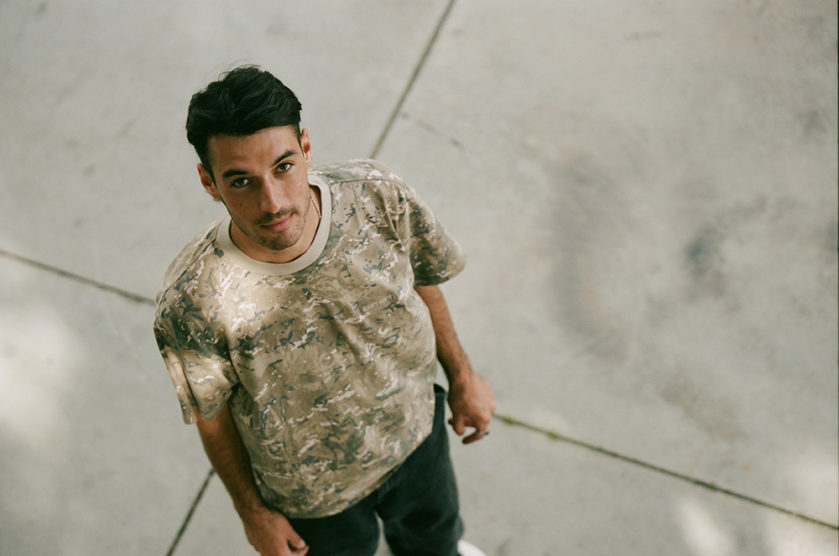 So you didn’t plan to be in LA when we got to hang out a couple of months ago?

No, no, I didn’t at all but we’d already spent more than two weeks in Mexico. That’s what people were doing, going through Mexico so that they could go to the states. Cam and Trevor were like, you should just come up, so we just extended. The plan was to stay in Mexico but we didn’t really feel like going back to Paris with all the curfews going on, nothing was happening anyways. 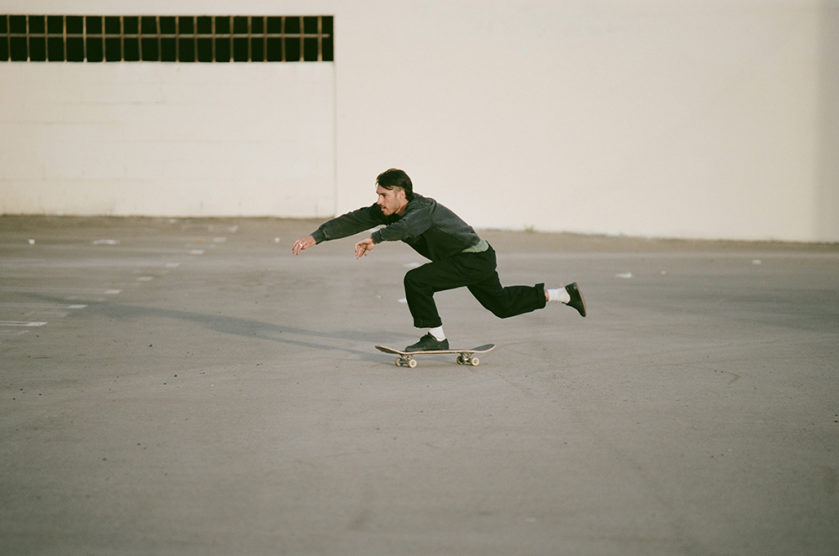 How long did you end up staying?

In LA, like a month and a half on Cam’s floor.

Were you filming for something in particular?

Not really. Val (Bauer), Cam (Holland) and Trevor (Owens) were filming for a Paccbet thing, but I was just down to be skating in the warmer weather. All the best stuff is going to Converse, but the rest, I still don’t know.

The Carhartt project is more back home. They have a few cities they want to stick to, so all my stuff is in Paris. LA wasn’t one of the cities they wanted but I think they are planning to do another video that features LA and maybe New York, more global. Hopefully, the travel bans are over. I think there was even Australia in there, I can’t remember but that project got changed up to a more Euro video.

When does the Europe video come out?

I think like January. There should be premieres all over and then end of January it will come out.

Your next trip is down to Mexico again?

Yes, I think that’s the next big trip and I really can’t wait because I can’t stand the winter here. I have been travelling so much during the last few winters that I don’t know how to handle a proper, full winter. It’s so hard and it feels like it’s never going to stop. I feel lame for leaving all the time, but I guess we have to be in the streets all the time so it’s better if it’s a bit warmer.

We just did a Drift trip (Atlantic Drift) to Istanbul; came back a week ago. Two weeks in Istanbul filming for a clip there, it was really sick, it’s amazing there. It’s really hectic, like 20 million people. They have a few marble plazas that are really good but they also have hills and stuff. It’s quite sick. The city is really big so it’s hard to find spots but there is for sure a lot of spots there if you look around. There are people everywhere so you need a bit of time to get around and try to find the stuff that you like. We were staying in this place called Besiktas, it’s a really crowded area. There’s a crossing that’s almost like Shibuya crossing, it’s so crazy. At night and on the weekend you can’t really move around it’s so packed with people. It’s quite scary if you’re anxious to be around people. I think there are more people than in New York. 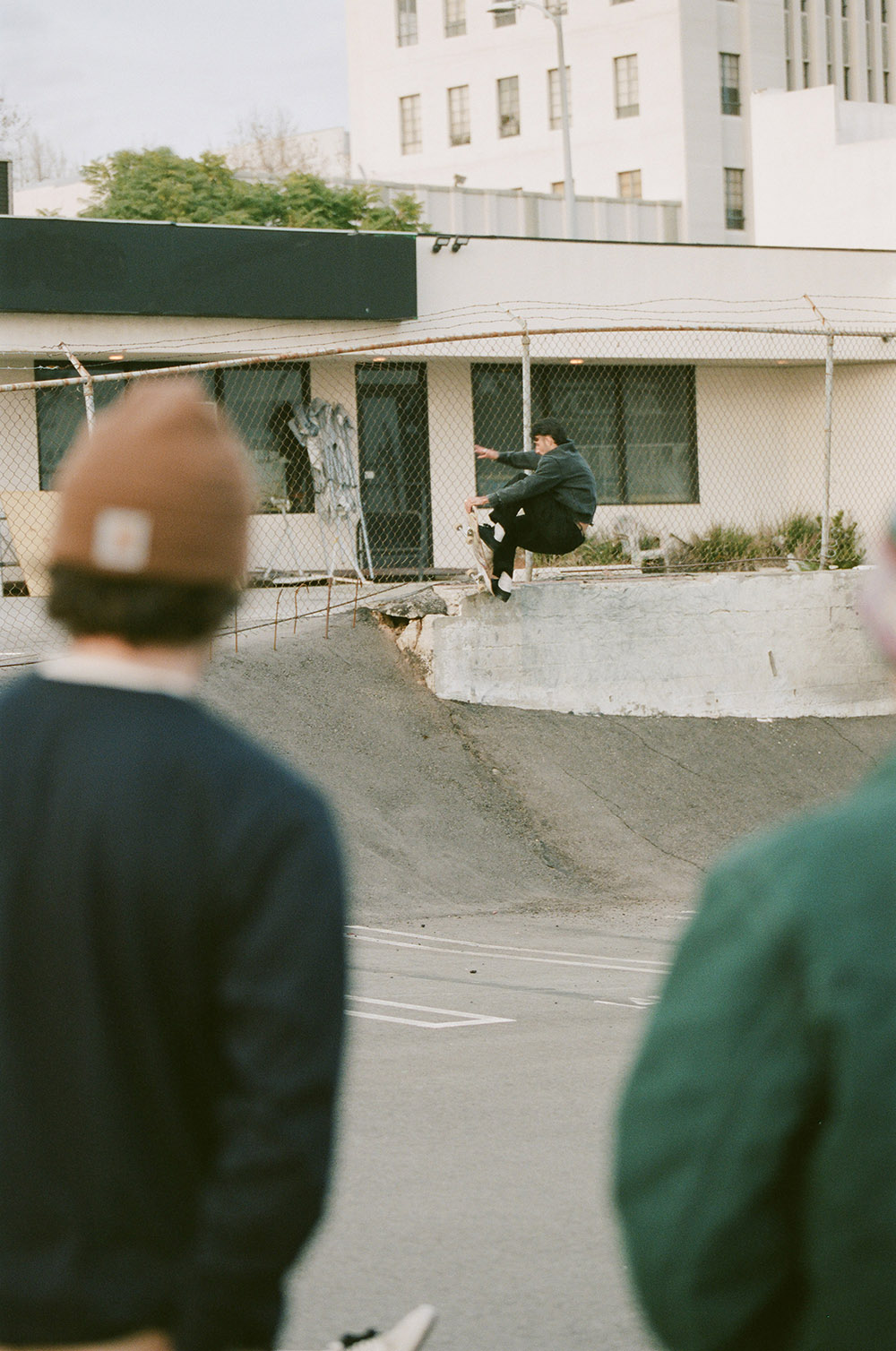 Had you or anyone been there before?

We had Austin (Bristow) the Palace filmer there and he’d been there and knew some guys there. He’d been to the main spots and had a few pins, but the rest of it we were just getting from watching videos or skating around finding stuff. There was enough to skate for sure for the two weeks.

Yeah, it was a lot of people. 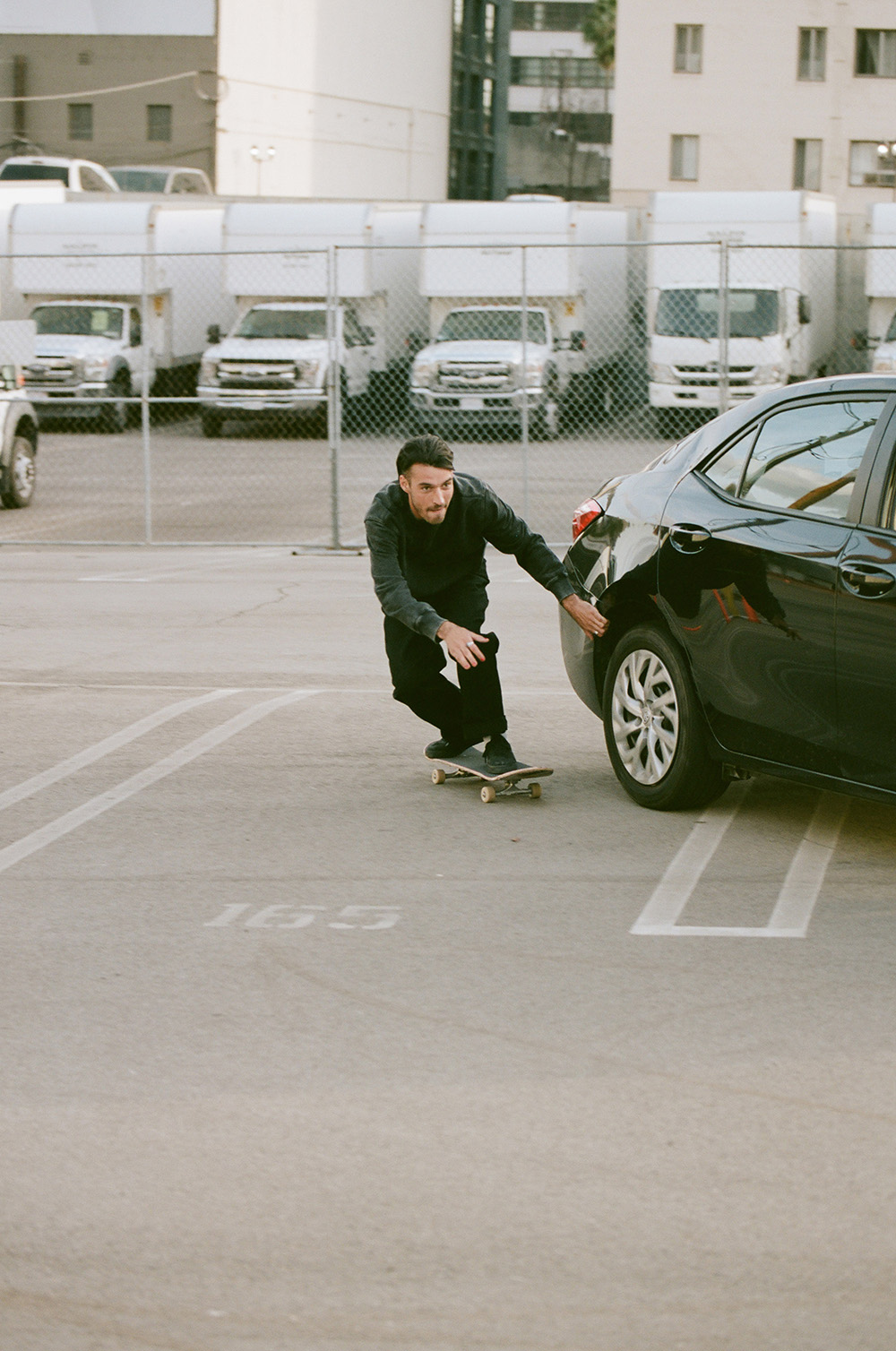 Jacob Harris (Atlantic Drift) organized it. The crew just keeps on getting bigger and bigger. It was cool cause there were two filmers so it was less stressful for Jake. A lot of fucking skating actually, I was really impressed. Sometimes the crew would split up and at night we’d see what both crews did and at the end of the day a lot of shit went down, it was impressive.

Are you comin’ back here any time soon?

We’ll see now that Cam is living in Europe. We’ll have to find a new place to stay, but we can always figure something out. I like staying with Cam and those guys cause they are really on it with spots. I’ve been to LA a few times but the last time I was there it was different. Spot wise we have so many choices. I just enjoyed skating in LA this time, it was quite fun.

How’s having Dustin Dollin in Paris?

We get to hang out a lot, actually. Our crew likes hanging out with him, going to play pool and shit. He will come to the spot and help out with traffic and shit which is sick. He’s out a lot actually. He doesn’t skate much but he comes most of the days. He still really needs to be out, that’s what I feel like I’m gonna be like in 10 years; like, I’ll need to be out with the boys. 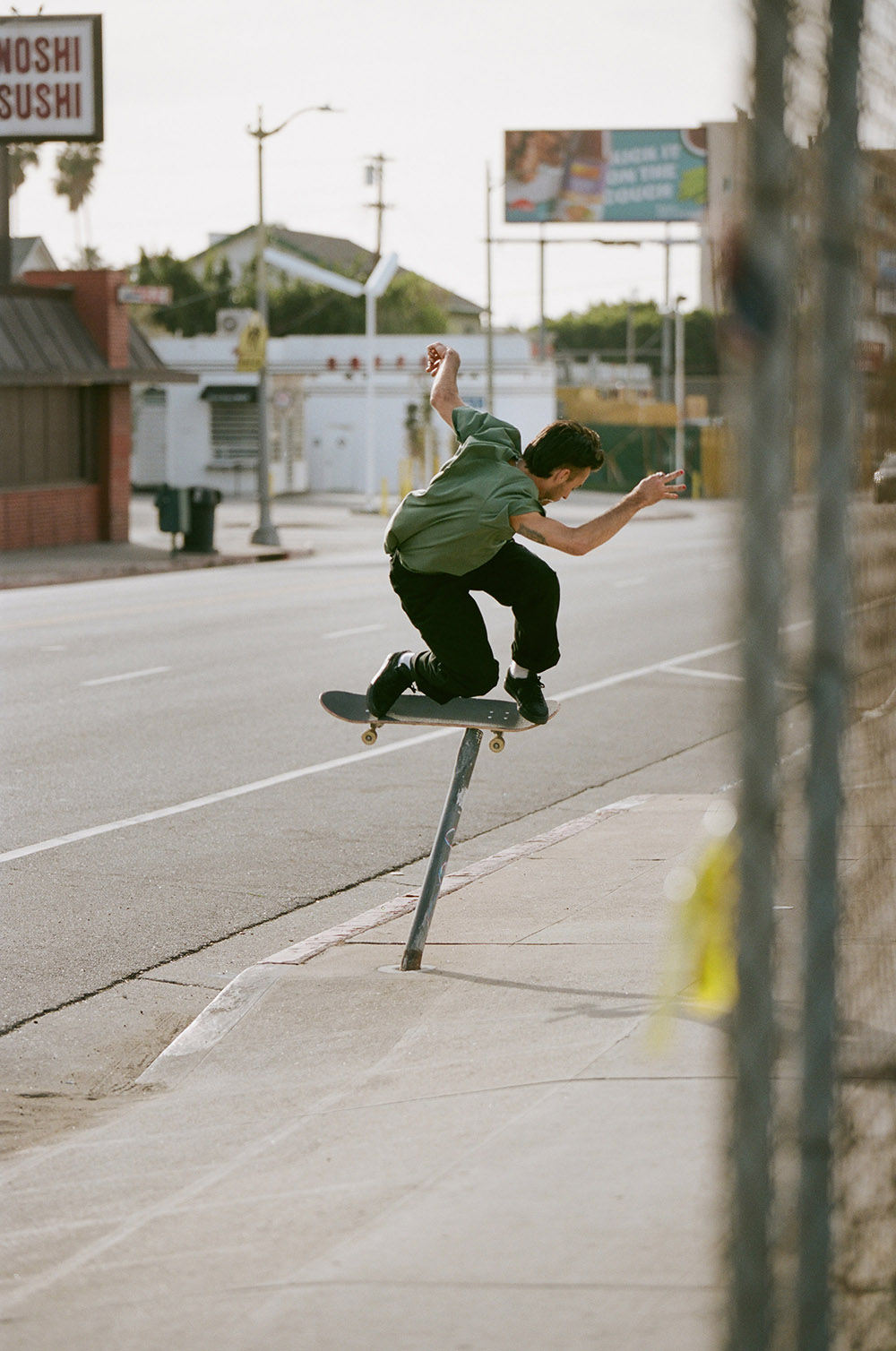 Does he speak any French yet?

Wow, he’s so bad at French it’s crazy. I mean, he’s not getting any better. He had French classes cause before getting married you have to do these courses, but I swear I don’t see any improvement, it’s like nothing, to be honest. But, in Paris, there’s a lot of people coming there and speaking English so he can get by.

I’m always joking that he gets along with all the Frenchies so well because they can’t understand him.

Definitely sometimes when he talks shit, it’s like, ‘That guy didn’t get it, for sure,’ because I would be punching him in his face. But he’s doing fine in France, he’s got it. He understands how french people live and stuff. He always makes jokes about the way that we’ll take like 3 hours for lunch but I think he’s got it.

That sounds like something he’d be into, and that the drinking culture is a little more open over there.

It is, but like, I’ve never been to Australia… but I feel like it’s not the same. People in France that go to the bar, it’s not to meet new people it’s just to meet your own group of friends; there isn’t a culture of mixing with other people at the bar. I feel like it’s different in Australia with pub culture, everyone gets to hang out with each other a bit more. You go with your group and hang out in a corner with your people.

It’s really good, we have everything open the whole summer and nothing has closed down since then. Most people are vaccinated, so it’s really good. I haven’t really been thinking about covid or hearing stuff about it. You have to wear the mask on public transport; I feel like people love the mask here, to be honest. But recently I was on public transport and I saw a guy get beat up because he didn’t wanna wear his mask. He just had his mask down under his nose, it wasn’t even on his chin, it was over his mouth but his nose was out; security took him down and there was this big fight. They stopped the train and took him outside on the platform and started pepper spraying everyone. They were literally putting their knees on his neck and shit and it was like, Someone died like that not even a year ago—what are you guys doing? People really started to revolt to stop it so they were pepper-spraying everyone. At the end of the commotion, all these people were taking off their masks and throwing them on the ground, there was a pile of masks. French people are really demonstrative, they will fight for their rights, it was pretty sick to see. Everyone was filming it cause it was way too gnarly; the guy was pretty old too and they were putting him on the ground and shit. It was definitely a weird tension. 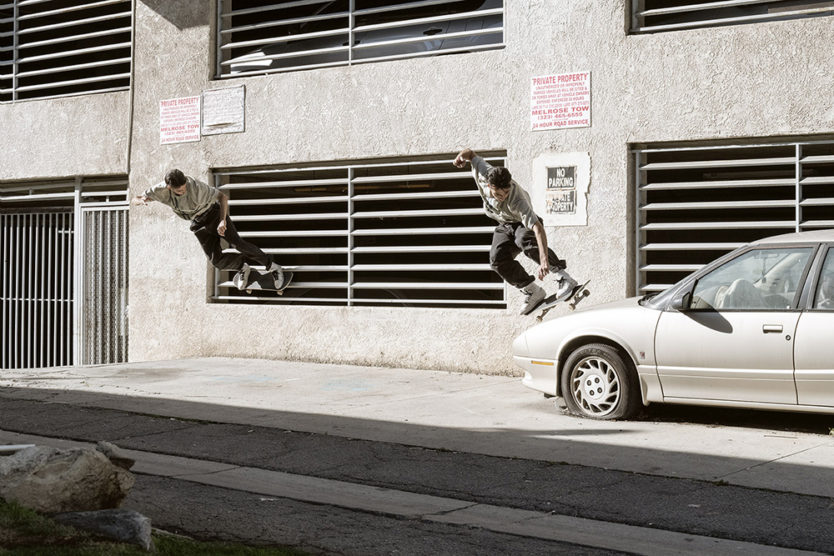 Other than skating what have you been getting into?

I’ve been really into riding my bike since covid, Paris is a really good city for riding bikes. Not like super gnarly, fully geared up and stuff, but I’ve been biking a lot. I’ve been shooting a lot of photos too. I haven’t put my photos anywhere cause I’m just waiting to get a lot more and do a little book or something. I was about to do a little Mexico zine but since I’m going back I’m going to wait to do a bigger thing and have an exhibition. I have some really nice photos, not like skate photos but I want to do something on Mexico. I have a few friends with galleries and if I do my first show I want it to be something intimate. If I do something on Mexico, I don’t want to do anything with skating, I want it to be a bit more contemplative. I can’t wait to put stuff out but I don’t want to just put my photos on Instagram because I wouldn’t feel satisfied. It means too much to me.

What cameras are you shooting with?

The last 3 years I’ve been shooting with the Contax T2 and I also have a half-frame camera. It’s a really crazy one called the Samurai. I’m not sure if you’ve heard of it. It looks like a handy cam, like a dad cam but it shoots half frames, so you have 72 photos on a roll. The quality is pretty good, there is a flash and a zoom and I want to do more with this.

My friend has one of those and I was tripping—it looks just like a handy cam.

I got it in Japan, they’re hard to find out here. I like the way you interact with people in the street cause it really looks like you’re just filming, so you can, like, pan to someone’s face and shoot a proper portrait. It’s a really different way of shooting photos, you get a different reaction out of people. You can shoot a lot. I like it now that film is so expensive I can shoot with this cause you get more photos. How much is film in LA?

There’s been film shortages here so I’ve been stocking up in bulk.

Yeah, it’s like covid hoarding. I probably have 300 rolls of film in my cabinet right now.

Let me know if they expire and I’ll come to LA and pick it up. 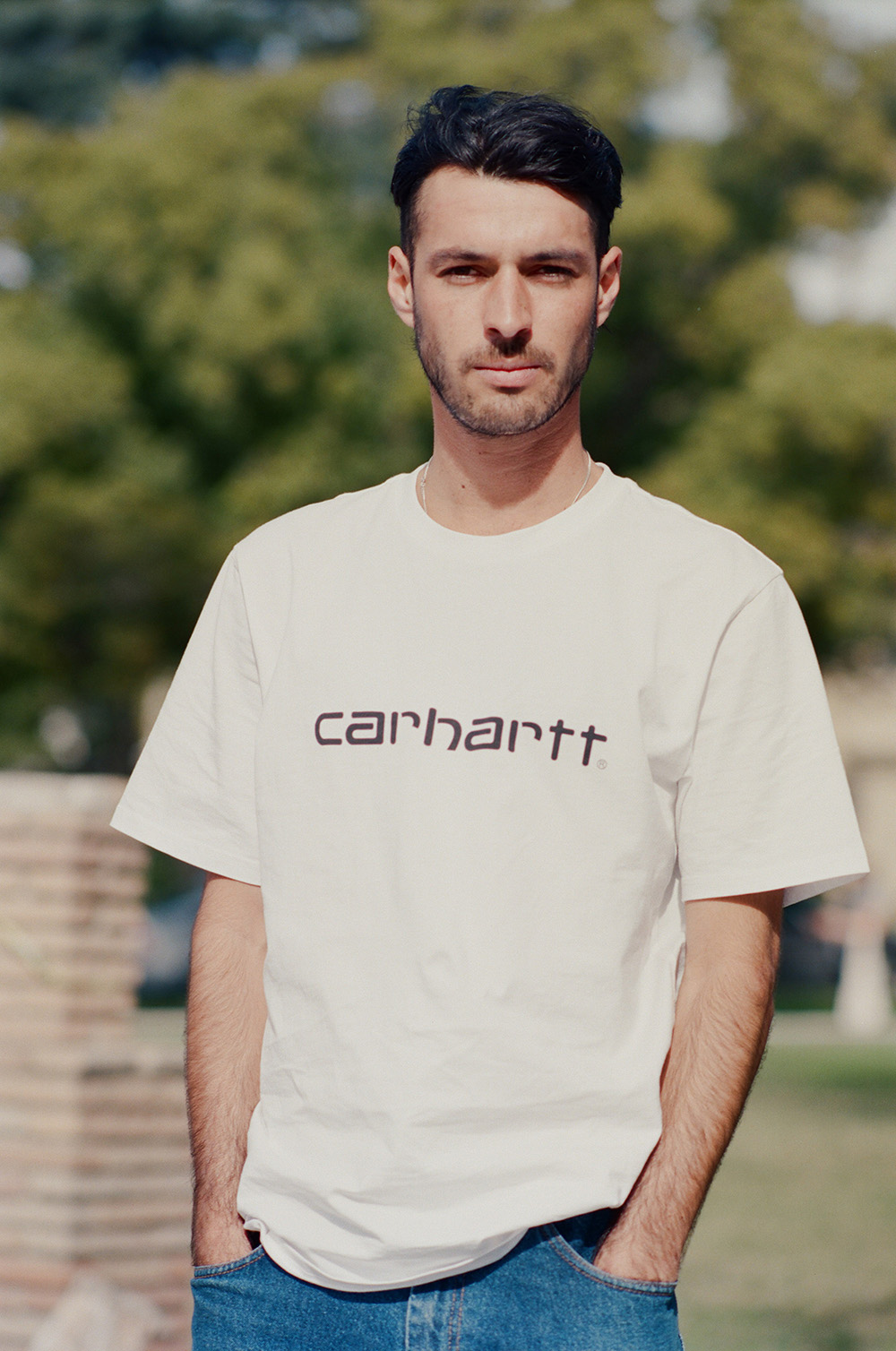