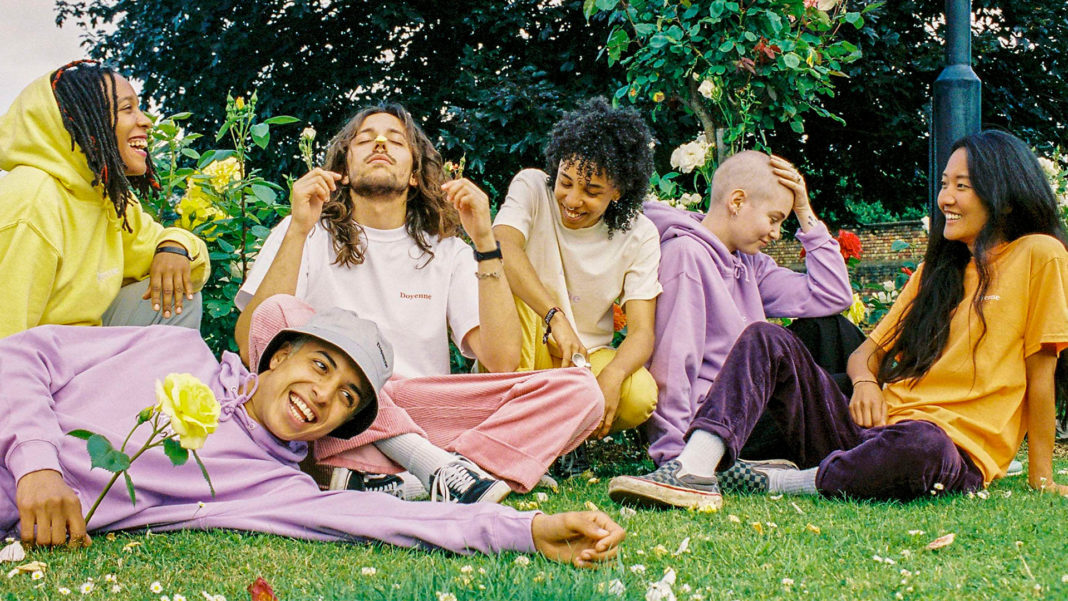 Doyenne is Scottish, female-run and cool as heck.

Two of these terms are not as common within the skate industry, which is fitting for a brand that is trying to push the limits of inclusivity for a sport that is largely dominated by males. They started off running free skate sessions in Glasgow, building space for people to learn to skate and meet up with the locals hanging in the skatepark, and moved into creating collections as a way to raise money for skate charities like Skateistan, and SkatePal. As a brand, they’re hoping that the representation of women, queer, and disabled skaters will enable minorities at the skatepark to see people like themselves skating and think, ‘hell yeah, I can do that too.’ We caught up with the team to chat all things Scottish skate. 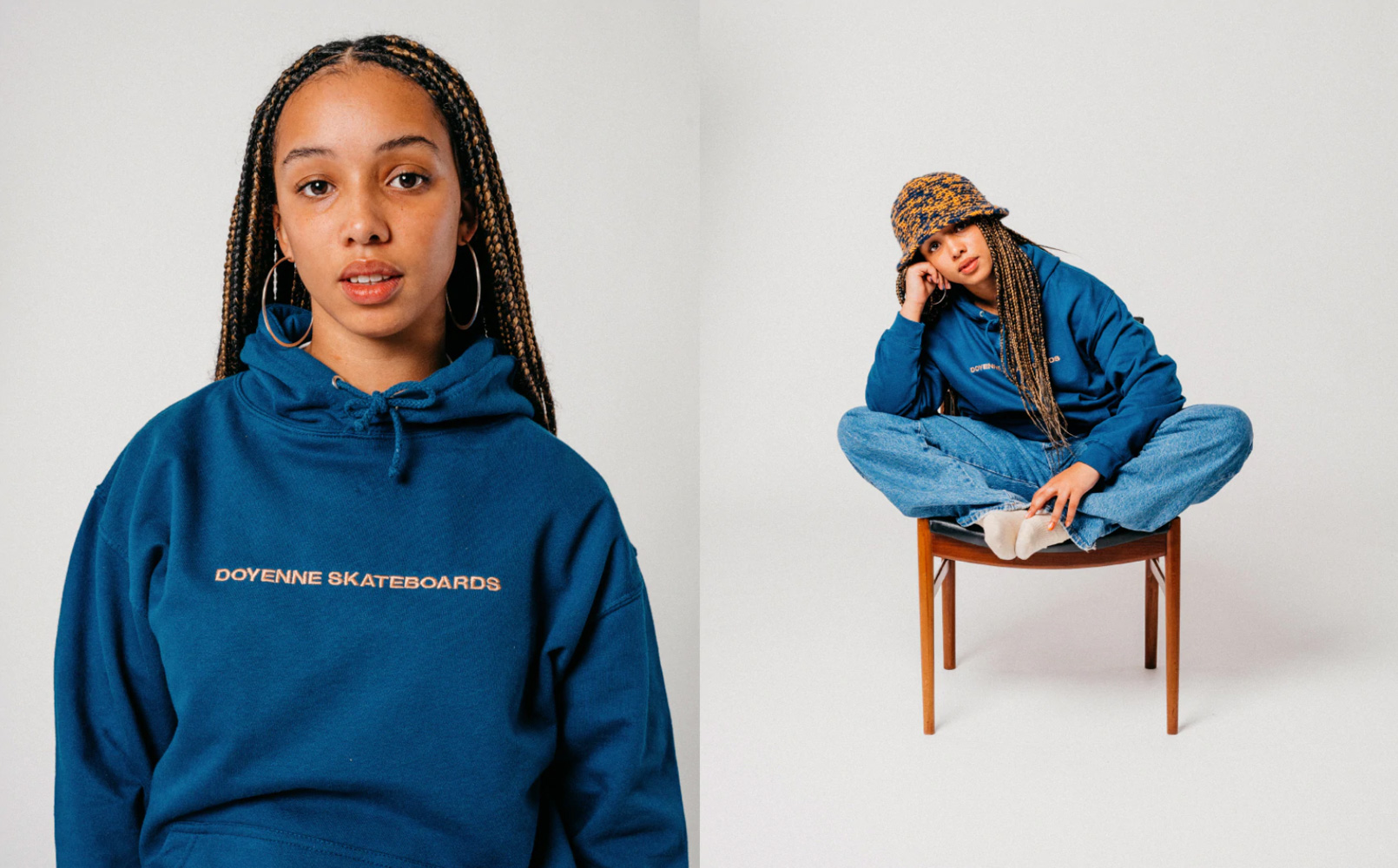 Alright, the age-old question: where does the name Doyenne come from?
Doyenne is a French origin, untranslatable word which means ‘the most respected or prominent woman in a particular field.’ It is quite ironic because most of the time the woman is the least respected in almost any field. Of course, the name is very gendered even if our brand is not, but the idea to have it as a brand name is that everyone can be a Doyenne, regardless of gender.

What is the mission of Doyenne?
Our mission is inclusivity. It became such a buzzword it starts to lose its meaning, but getting out the dictionary again, inclusivity is about ‘providing equal access to opportunities and resources for people who might otherwise be excluded or marginalised, such as those having physical or mental disabilities or belonging to other minority groups.’ So, when we talk about skateboarding, clothing, conversations and opportunities, we try our best to create access and space for those who otherwise wouldn’t have easy access.

Are you noticing a difference in the diversity at the skatepark since starting Doyenne?
Yes, we absolutely did. We are not here to take the credit, skateboarding started a transformation and we are just so proud to have been part of it. Of course, our beginners’ sessions helped to create a welcoming environment for people to try out and a lot of people loved it and stuck to it. They are now sick skaters, which makes us so happy to see.

How important is it for minorities to see themselves represented in sport, and how does Doyenne do that?
It is extremely important, representation matters so much in everything. For some people that means just existing, but often we don’t get to see them even doing that. Women and queer people always skated, we just never saw them in magazines, brands and whatever media we have. Doyenne is a platform to show that these people not only exist, but thrive. 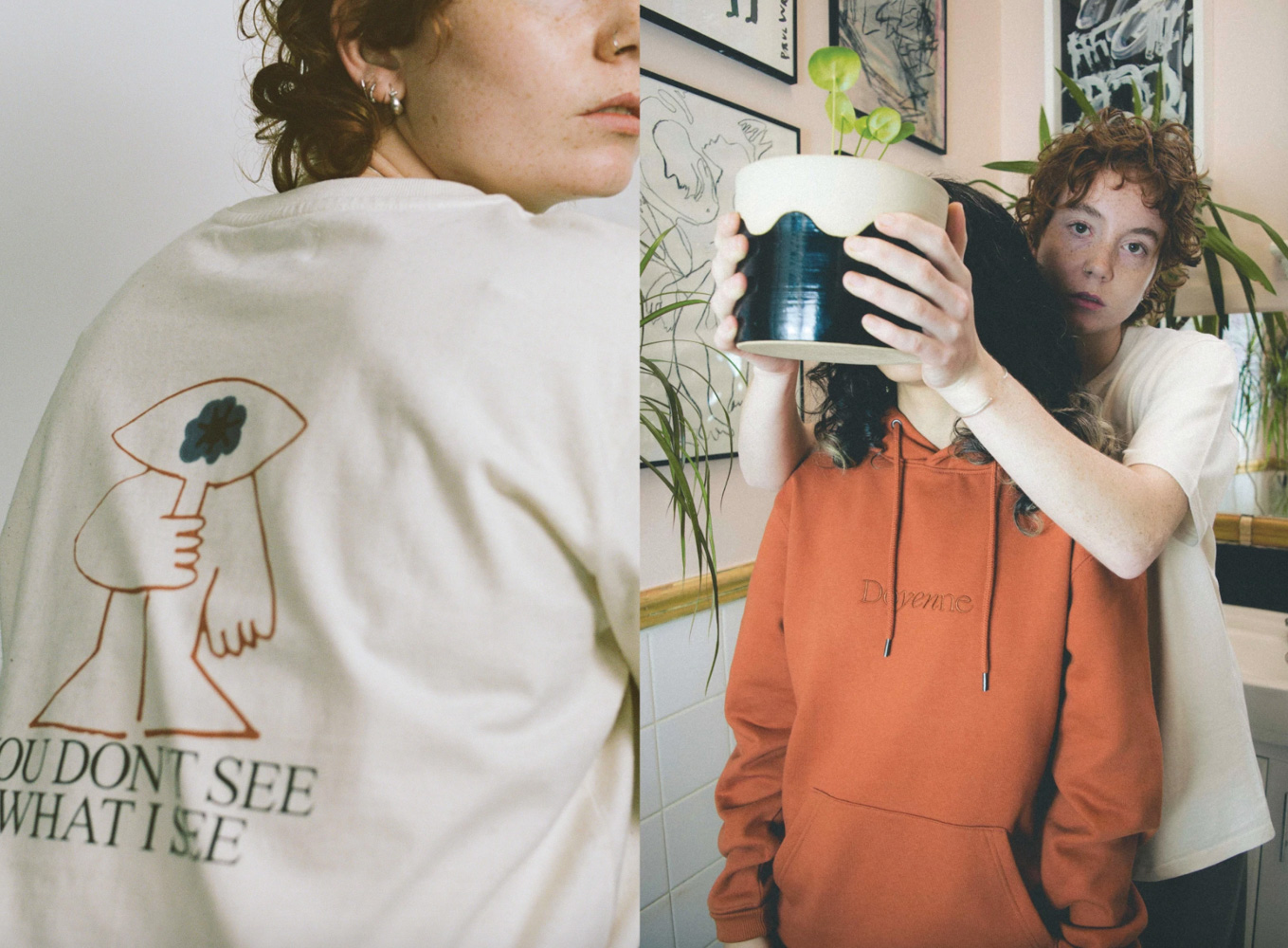 You’ve done some cool collaborations in the past, like Hart Club and Rejeans, but my favourite was with Everyone. Can you explain the idea behind that one?
We absolutely love collaborating with other people. It’s probably the central idea of our brand. When the pandemic started, we wanted to involve everyone in collaboration, especially because we were all stuck at home spiralling into anxiety and terror of the situation we suddenly found ourselves in. So to distract ourselves from it, we decided to open the design of our next decks series to everyone, so they could all give it a go and give their own interpretation. We had so many entries and it was amazing to see how so many artists envisioned Doyenne in their heads differently. At the end of it, we picked one that resonated the most with us and our style and we had a virtual exhibition to show them all. It was beautiful. 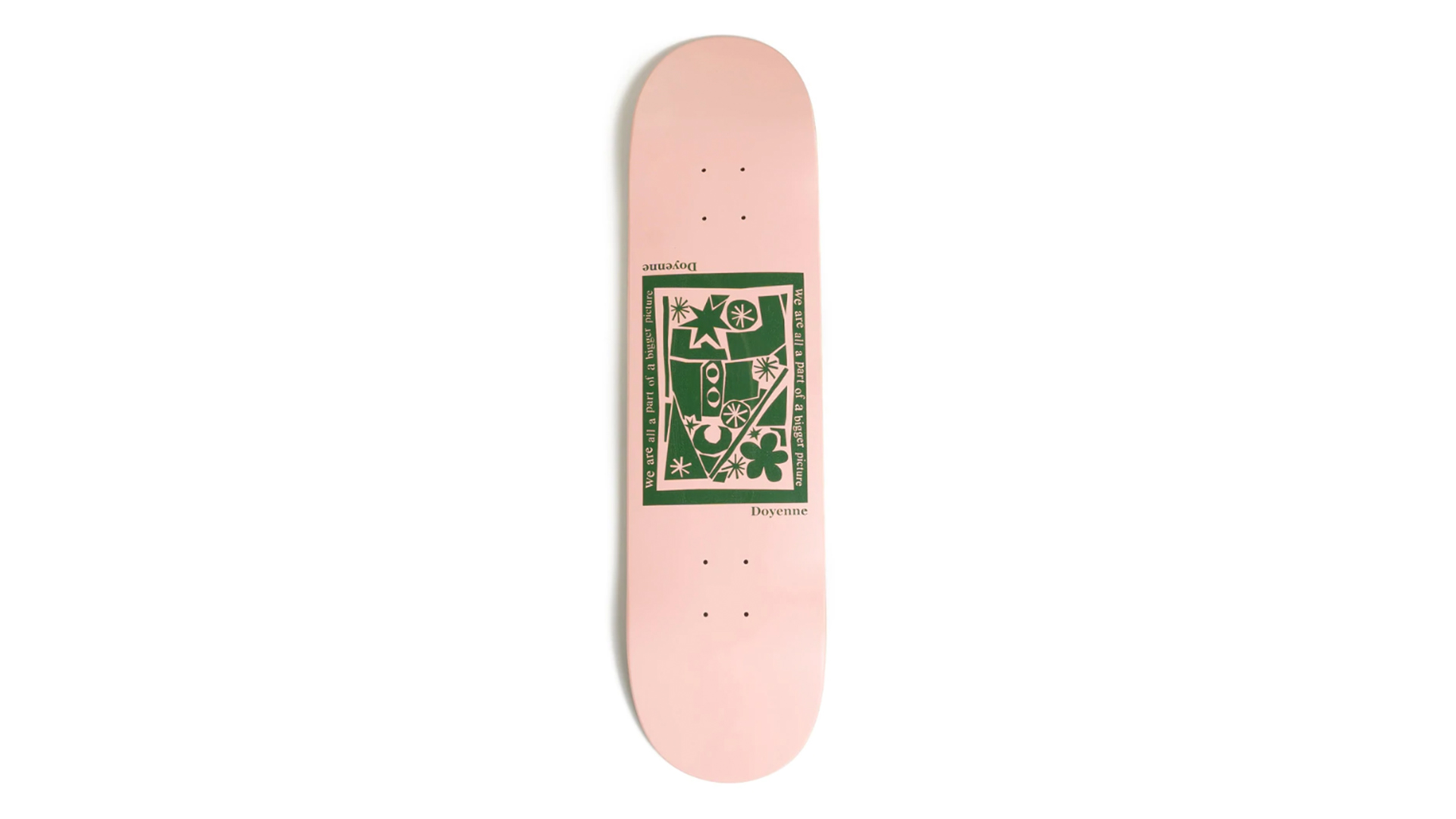 What inspires Doyenne?
We are inspired most by the people we meet in our community. From other people like us, who have the guts to start their own thing to make this world more like their own, and we love to work with people that have ideas aligned with us.

What do you want to see more of in the skate world?
The skate world is changing rapidly, in what we believe is the right direction. So we love to see more of that. Also because, let’s be honest, things were getting a bit repetitive. We need new ideas, styles, skaters, trends and everything in between. We want to see skateboarding going back to its punk essence, where it was about creating the new and not about doing exactly what everyone else is doing… with trap music in the background.

Apart from selling clothing and running skate lessons, you just released a film recently. Where can we watch it and what is it about?
We wanted to make a film for a long time, inspired by our recent collaboration with Hart Club (an art space for neurodivergent people) and relate it to our personal experience, showcasing the experience of neurodivergent people through the eyes of those who are represented the least in the area: women and non-conforming genders. It is not available to watch yet, but it will be soon.

Tell us more about your latest project on consent, ASK.
ASK, is a collaborative project about consent between us, Consent is Rad, Consent for Breakfast and Hera Skate. We decided to work together on this project because we deeply care about safety in our community and we couldn’t ignore the recurring cases of abuse, sexual violence and lack of respect in it, and we wanted this to change. Everyone, skateboarding or not, deserves the right to be safe and respected. So we collected stories, opinions, resources, art and voices in a zine all about what consent means and how we can start asking more. 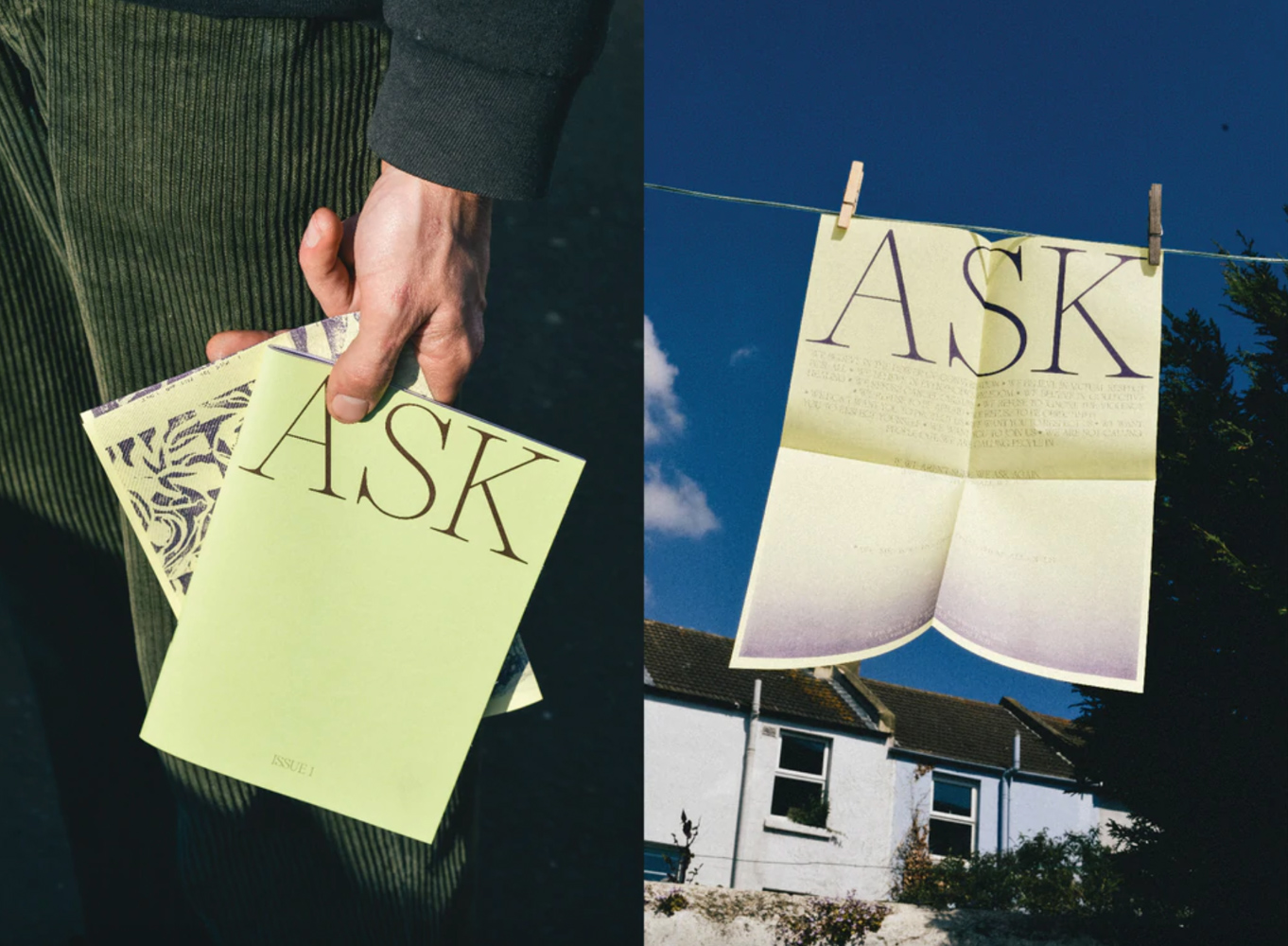 We want to learn and grow together, from each other, as we do when we skate. As part of the campaign, we have a zine which we hope to distribute as much as possible in skate shops and spaces, and three t-shirts made by artists from our community like Liisa Chisholm and Paula Umana, with 100% of profits going to Consent is Rad. Also, the designer of the zine, Giulia Saporito, redesigned our iconic ‘Skating The Fuck Away From You Tee’ which has been a symbol for our brand. We thought it fit very well with the concept of respecting spaces and consent. 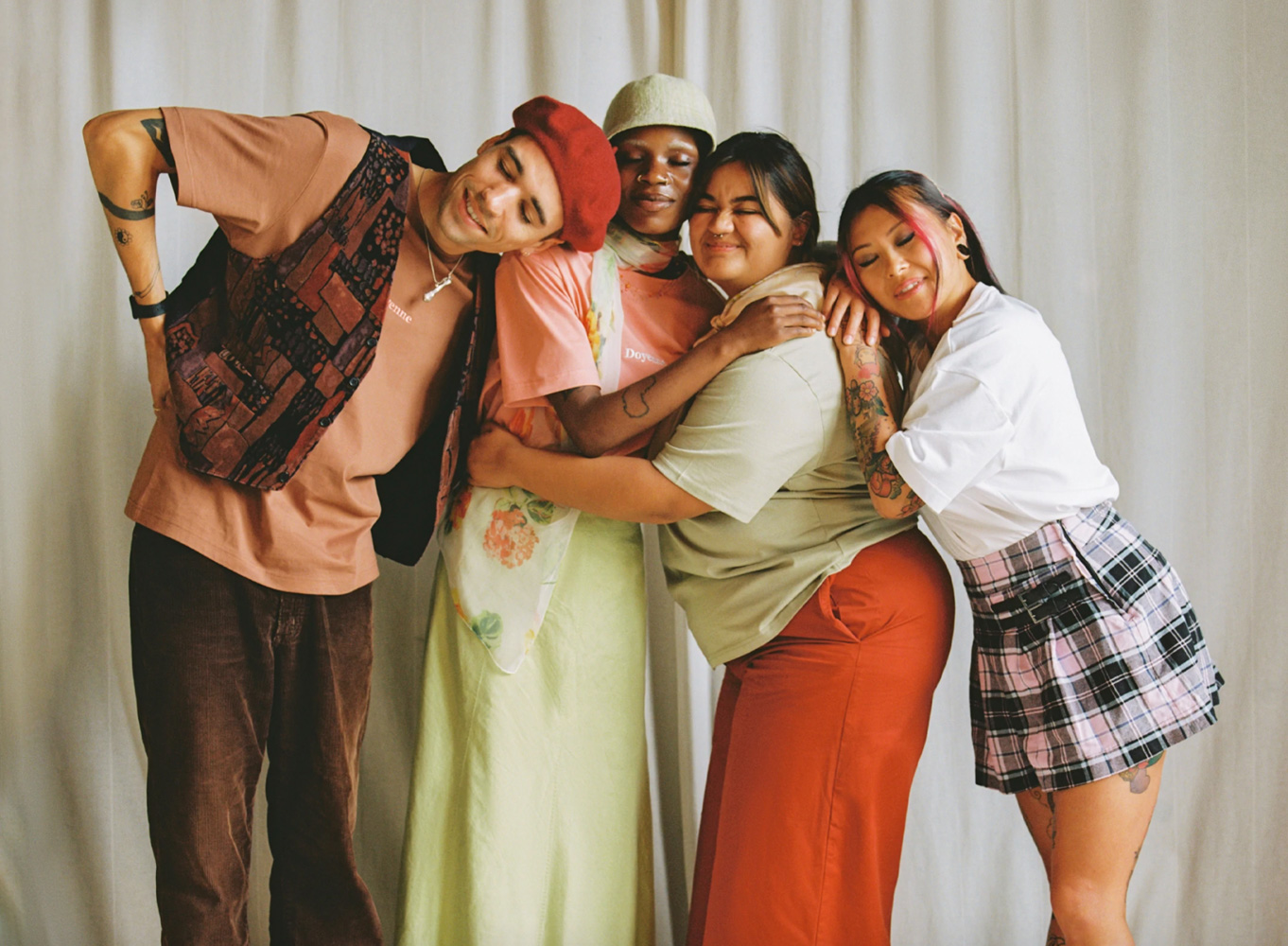 What’s the future looking like for Doyenne?
As our bio says, we’re ‘Getting somewhere, slower,’ which is a reference to the Villa Villa Cola film, Getting Nowhere Faster, released in 2005 (and probably the first full-length, all-female skate film). We want to get somewhere, slower, going against the fast-paced capitalist society we are living in. As a brand and business, our rebellion is to take our sweet time doing it.

And last but not least, favourite whiskey region, being the Scottish brand you are?
We are going to disappoint you here, but we are beer girls. Tennent’s, to be regional. The cheapest lager on tap to be real about it (and we love to be real about things).