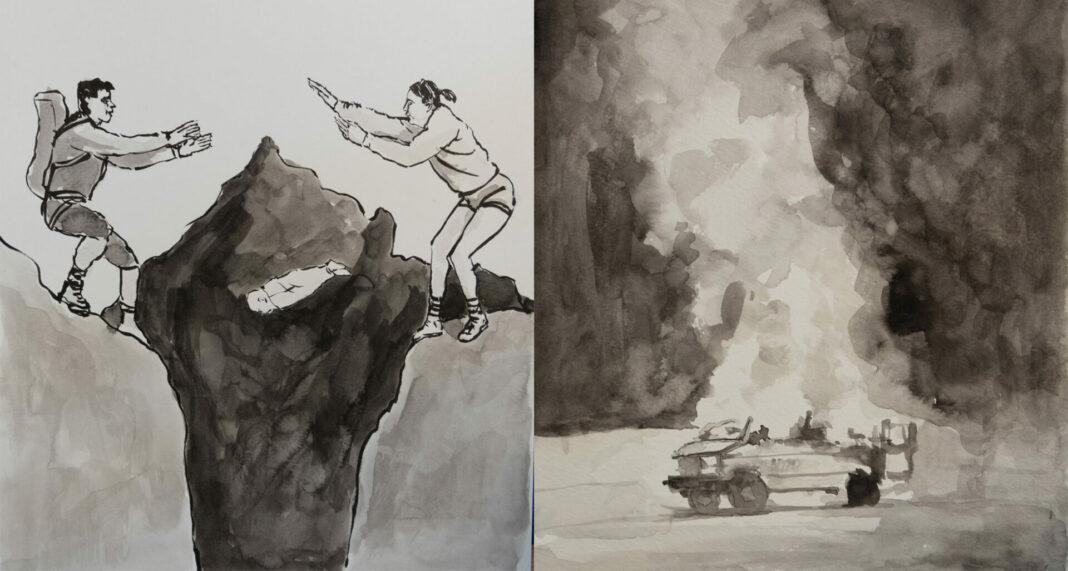 If you’ve opened a skate mag in the last 20 years, you’ve definitely experienced the photographic excellence of Ben Colen.

We say ‘photographic excellence’ instead of just ‘photos,’ because ben is actually excellent. he’s captured incredible skate photos for Girl, Chocolate, Nike, and Supreme, and he’s provided some of the most memorable covers for pretty much all the mags at the newsstand. He’s a natural. He’s a talent. He’s unreal at what he does, and now it turns out he can draw real good too. Can he cook, though? Probably. We didn’t ask.

First question: Are you related to the artist Dan Colen, aka, ‘Thunder Dan’?
I don’t think so, but I’ve honestly wondered about it ‘cause I don’t think I’ve ever seen anyone else with the same last name, spelling-wise. Let me know if you find out.

Second question: Normally we’d be talking to you about photography, but here we are looking at art and illustration. How’d we get here?
I’m not sure, to be honest. I guess posting this stuff in the stories paid off at some point. Mid-life crisis?

Question three: Are you one of those dudes that has always drawn or is this a relatively new thing? Looks like you’ve been at it a while.
I’ve always drawn. When I first went to art school, I went for painting and drawing along with photography, but I quickly started focusing more on the photo stuff. I actually kind of stopped drawing from the time I graduated art school until about six or seven years ago, when I started drawing again with my daughter and really got back into it.

Question four: When you were a kid, did you ever draw your own pornography because it was so difficult to get the real stuff?
I’m old, but I’m not that old.

The fifth question: Who are your favourite artists, like, who inspires you? I wanna say Pettibon is one of your guys.
Definitely love Pettibon. When I was growing up, I was really into comic books and stuff and still love a lot of comic or comic-related people: Daniel Clowes, Ralph Steadman, Crumb. I always loved Pushead. Lots of other stuff too. I’ll think of like, 20 other people as soon as this is over. I also get really excited to see the stuff my friends do; Mike Gigliotti, Lee Smith and my friend Ian Bavitz among a lot of other friends all do really rad artwork and make me want to keep going with it. A lot of different kinds of art and stuff friends are doing is inspiring too. It all feeds into it.

When did you start sharing this stuff and were you hesitant about it?
I’m always sort of self-conscious about it. I think sharing it probably coincided with Instagram adding stories, because that always felt like less of a commitment. Kind of like, I’m just gonna throw this on here and if it sucks it’ll be gone in a day or whatever. But now whenever I have a drawing I like, I just put it up. I’m not as freaked out by it.

Are they for sale or do you just do it for… Actually, why do you do it?
I haven’t really sold many. People ask, and I’m down, but I have no idea how much to charge, and also a lot of my favourites are in sketchbooks. I mean, do you just cut it out of the sketchbook and sell that? As far as why I do it, I don’t know. I think I like the idea of making stuff when I have spare time rather than just watching tv or whatever. It’s also fun to see the small improvements over time.

You’ve got a kid and a full-time job—what time of day are you sitting down to draw?
I’m freelance, so sometimes I’m real busy and then sometimes I have a lot of downtime to draw. I kind of do it in waves.

You’ve obviously got a great eye for what makes a photo. Do you think having an eye for photographic composition helps with your art?
I’m sure the photography and the drawing both help each other out somehow, but I don’t know, maybe I just tell myself that. I think thinking about images as much as possible can’t hurt.

I think the most striking image in this gallery (after the Grim Reaper on a single-wheel electric scooter) is the Grim Reaper on a swing. Tell us about that.
I still have a bit of a junior high sensibility and love drawing reapers and skeletons and all that stuff. I think that one was just while I was in a little phase of drawing them a lot and I think I thought it would be fun to draw. Honestly, a lot of the stuff I draw is just some idea that might seem kind of dumb, but makes me laugh or whatever. Plus, I grew up on horror movies and stuff like the Misfits, so I think I always liked that kind of thing.

Any plans for a show or a book in the works?
No plans right now but I’d definitely be into it.

Shoutouts, last words?
Thanks for giving me the time and space. I appreciate it.

To see more from the 2022 Monster Children Annual, pick up your copy of the mag here.