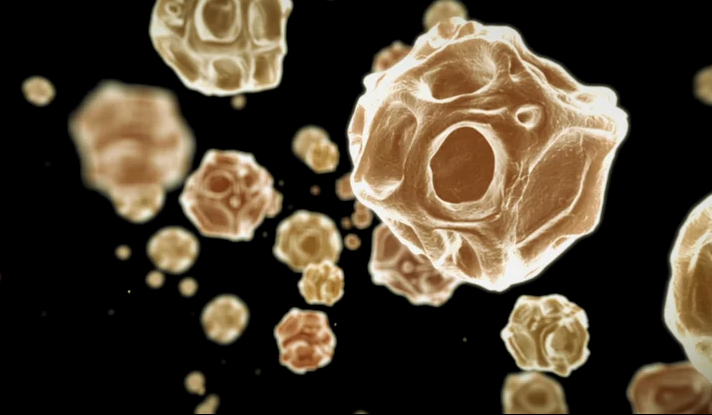 It seems appropriate that a movie about fringe researchers who are obsessed with a fringe life form is attaining fringe notoriety. The Creeping Garden, a documentary about a mysterious creature that is neither fungus nor animal, that throbs and slithers, doesn’t have a brain, but possesses decision-making intelligence, is such a film.

Racking up a wreath of indie festival awards, and with an awesome trippy soundtrack by Sonic Youth’s Jim O’Rourke, The Creeping Garden should have a bustling audience, but it has managed to secure only limited runs in various cities at art house cinemas, so it’s pretty tough to track down and watch, which is coincidentally sort of a metaphor for the movie.

The shadowy world of myxomycetes (or plasmodial slime moulds, to us plebeians) is oft ignored, except by a group of eccentric researchers who have utilized it’s creepy animal-like tendencies for their work. With the film’s use of macroscopic time-lapse footage, it’s not so hard to see why some people are smitten with Slime Mould. Neon pods and tentacles and blobs sway in space, in a sort of spooky Fantasia-esque ballet. Up close, Slime Mould looks like an undersea garden, but, as it’s explained to us, it can be found under your resident dead log. Every time the soundtrack swelled, and close-ups of mould appeared on screen, I lusted for a joint.

In small titled vignettes, we are introduced to these Slime Mould lovers, whose occupations are so far-flung, that it’s hard to ignore similarities between the status of the Slime Mould and themselves. There’s a scientist who interacts with the mould by playing piano, an artist who makes lacey designs by feeding the mould oats though a maze, a random guy who drifts around the forest with a flashlight and mumbles simple yet profound things to the camera, and other intellectuals who harbor a romantic respect for this sci-fi organism. They all work in the outskirts of their professions, perhaps overlooked despite pioneering groundbreaking work to “bridge the gap between science and art,” as one researcher puts it. The film’s effort to illuminate the work of the researchers is honest and quirky. It’s a story of the misunderstood that pulls on an indie audience’s heartstrings.

Clocking in at just 80 minutes, The Creeping Garden is a perfect science fiction documentary that should gain a slow and steady cult following. If it can’t be found at a cinema, it should be available on VOD shortly, so no one should have a problem projecting it on a wall and listening to the amazing soundtrack at your next sound bath or acid party. Not one to miss.