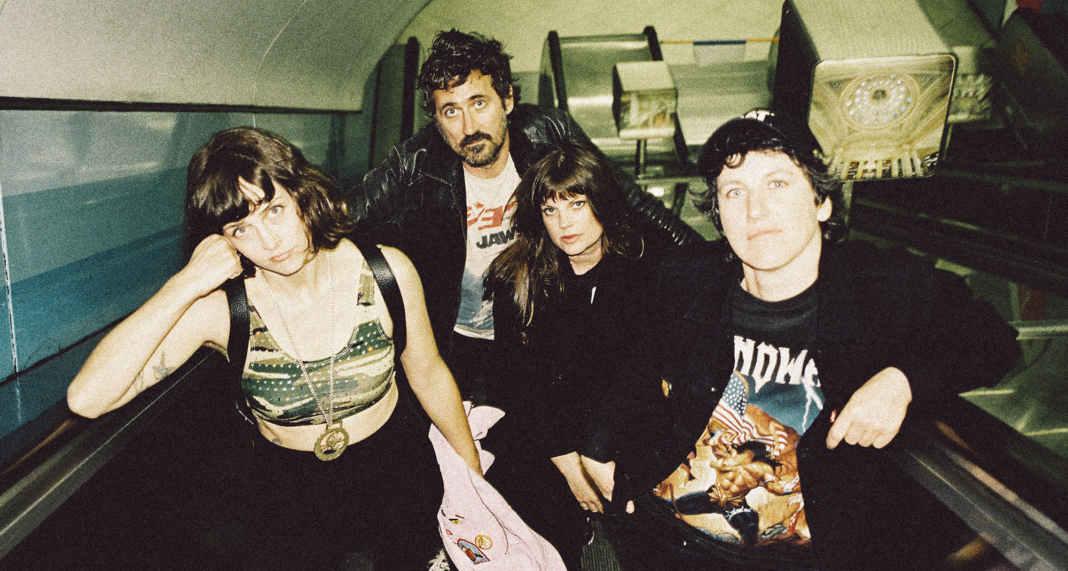 The natural progression of frontman Gareth Liddiard’s band The Drones, TFS have carved a space for themselves by making a foray into the weird. Propulsive jungle rhythms reminiscent of the Birthday Party serve as the backdrop for post-apocalyptic fever dreams churned out by guitars and uncomfortable lyricism. Their new record, Deep States (out Aug 20) leans even further into this strangeness. Recorded in the wake of lockdown, its subject matter borrows from conspiracy theories and pop culture, but in a way that is deeply intelligent rather than derivative. Ahead of the record’s release, we chatted with Gareth about hip-hop and ‘Give a Fuck Fatigue’.

You made this record after lockdown. Did you have a pile of songs that you could plough through by the time you all got together?

Yeah, I had a few, but we do it in a weird way compared to other bands where we only really write when we’re together. And y’know, I can write songs by myself, but in that situation, it was just a bit demoralising. Like, if you’re staring down the calendar looking at all the shit you need to do when the calendar is just blank, you’re better off just going to the pub!

With your song ‘Give a Fuck Fatigue,’ how do you go about writing about that state when you’re stuck in the middle of it?

I suppose you need to create a bit of space between yourself and it, and when you’re writing songs you kinda need words so you don’t really have a choice. But I dunno, you gotta have a sense of humour about these things. Approaching it with a little bit of humour will get you through it and it just means you can talk about stuff where everyone else would think it was uncool. Know what I mean? But the thing about rock ’n’ roll is people think you’ve gotta write about shit from 50 years ago for it to be valid and cool or something, but you can’t wait that long. You just have to make it funny.

You’ve started leaning into rapping recently. What’s that about?

Well, it’s kinda fun to do! And it’s not foreign to me. I always sing and ultimately, rapping is just the same thing without any melody. Like in high school we were listening to Ice T, Run DMC, you know? It was huge! So it’s not something that I’ve recently learned, it’s just something that’s always been there, and it’s been there as much as John Lee Hooker or Otis Redding or Led Zeppelin, it’s just always been around. And the minute you turn a drum machine on, it just wants you to do that.

I wanted to ask about the song ‘Legal Ghost.’ You said it was the first song you’d written that you thought was any good. How did you know you were onto something?

[chuckles] Me and Rui Pereira were in the punk scene, doing that stuff; then when we grew up we went through a lot of shit, had a lot of tragedies, sort of the effects of drugs and crime and shit. And having been through that, we felt like we didn’t have to overdramatise or overemphasise anything—I didn’t feel like I owed anybody any excuse to write whatever I wanted to write. After that, it was like, ‘I’ve been through this, so I’ll do whatever the fuck I want.’ And I dunno, it’s a weird question—how do you know if something’s any good?

What was rerecording it about?

It felt like it would suit, it was built around a drum loop, it sorta had a few of the things that the TFS stuff had. I hadn’t really thought about it that much, but it was because some kid on the internet said ‘Wouldn’t it be great if TFS rerecorded this?’ And then we did and the same kid was like, ‘Oh my god, they’ve done it!’ Little did he know he was responsible for it! He woulda been stoked as fuck!

I’ve noticed a couple of bits from that song show up in others of yours, like in ‘Aspirin’ you refer to someone’s legal ghost. Is that on purpose?

Yeah. I think it was because it was such an old song and we didn’t have plans of doing anything with it, it was kind of out there in the spare parts department and sometimes you’re looking for a rhyme, and you’re so desperate to get a song finished that you’ll take anything from anywhere, especially if it’s one of your own songs. I’m into recycling shit. Writing a song is an act of desperation!

You’ve said you only write songs to get them done. Do you stand by that? ‘Cause there are lots of quite potent and useful ideas in your songs.

Yeah, something like John Lennon and Paul McCartney, they’re massive pricks ’cause they popularised the notion that you have to write everything you sing. Before that, people did write their own material, but it’s not like their new album was 100% theirs. Like, maybe they wrote four of their own songs and covered the rest because they were good songs. I’ve always been into doing other people’s stuff, just because it’s fun to play a good song. Like, it’s fun to drive my car, you don’t need to have built it.

You’ve been using a lot of conspiracy theories as source material on the new TFS stuff. What’s their appeal?

They’re everywhere you look these days! Like, there’ll be UFO magazines at the newsagent, or there’s the Capitol Hill insurrection … it’s wild. They’re kind of the new quasi-religion; in the 20th century you had Nazism and communism replacing religion, like the industrial world replacing the need for churches and steeples. They’re sorta the same framework, the idea that even if science proves you wrong, you stick with your ideology. That leap of faith, I dunno. Even the whole anti-vax thing is a form of that.

This record saw you leaning into more fictionalised worlds. How come?

You need to write about what’s going on even if it’s difficult. A great example of that is Kurt Vonnegut, the American novelist. He wrote that great book Slaughterhouse 5, and he explains how he’d had these horrific experiences at the end of World War II. And after the war, he was at his buddy’s and the wife would say, ‘You crap on about war all the time, why don’t you write a book about it?’ And Vonnegut goes, ‘Well, I don’t know how to.’ And it took him 20 years to figure out how, and the book is this semi-science fiction alien story, this completely phantasmagorical mix of the real world and the imaginary. So you have to figure out—if you’re writing about the pandemic, it’s so boring, and it’s happened to absolutely everybody; it’s just this thing that nobody wants to hear about, so you need to throw a little sugar in it. Bit of sci-fi, few aliens. You’ve got to make it sexy somehow. So all those ingredients in the album are there to do that.