It’s 2 pm on another humid day in Bali and Alipjon has just woken up.

He throws on some dark glasses and paint-splattered jeans, and then walks out of his koskosan (cheap rooming house) to meet me for our interview. He doesn’t say too much until after the first few sips of a black coffee and a couple drags of a Marlboro Red. But the chemicals slowly wake him up, revealing a glimpse of his quirk and passion. By 10 pm, we’ll both be drunk and Alipjon will have a broken arm—more on that later.

Alipjon is a 25-year-old painter and illustrator from Jakarta. He’s been pegged as a “garage artist” by Insight, the clothing label who recently shot a collab video with him, but he still makes most of his money by painting with acrylics on canvas. His aesthetic sits somewhere between the rawness of the late Jean-Michel Basquiat and the colour-heavy, fluoro surf and skate logos that were popular in the ‘80s and ‘90s. 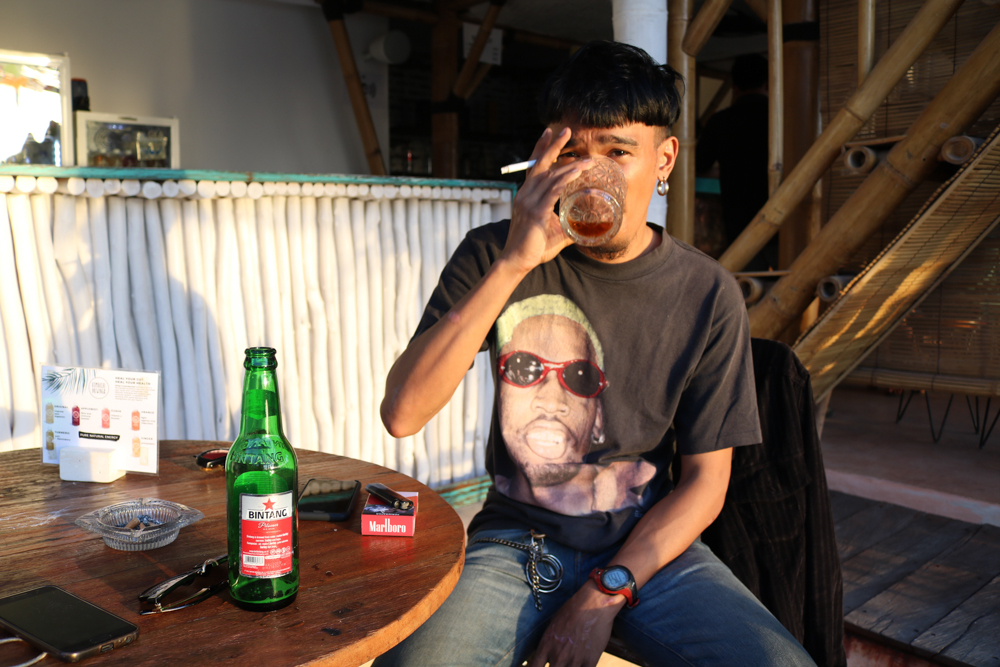 Evidently, explaining his art with words isn’t something Alipjon has much interest in. As he said in the recent Insight doco: “A lot of stuff I can’t express with words, that’s why I make art. I let my art speak.”

With a cigarette permanently dangling from his lips and a pirate-style earring in one ear, Alipjon has a bit of a rock star look, which makes it easy to assume that he’s this free-and-easy dude who floats along and makes art when he feels like it. But beyond the late nights and 2 pm wake-ups, it’s clear that Alipjon has an intense motivation to work.

This might have something to do with him growing up in Jakarta, a city with a population of more than 10 million, which he describes as “beautiful and hard and tough at the same time”. Bali, in comparison, is slower-paced and less intense.

Alipjon first came to Bali back in 2013 after he dropped out of art school. (In his words: “The teacher was wrong, so I’m out.”) He was curious about his country’s most visited island and he had the desire to learn to surf and to keep developing his practice. After some time in Kuta and Ubud, Alipjon eventually found a cheap room in the hipster surf-mecca of Canggu.“I learned many things and I surfed but then I was out of money and selling drugs,” Alipjon explains. “I was using the money for art materials and to pay the rent.” 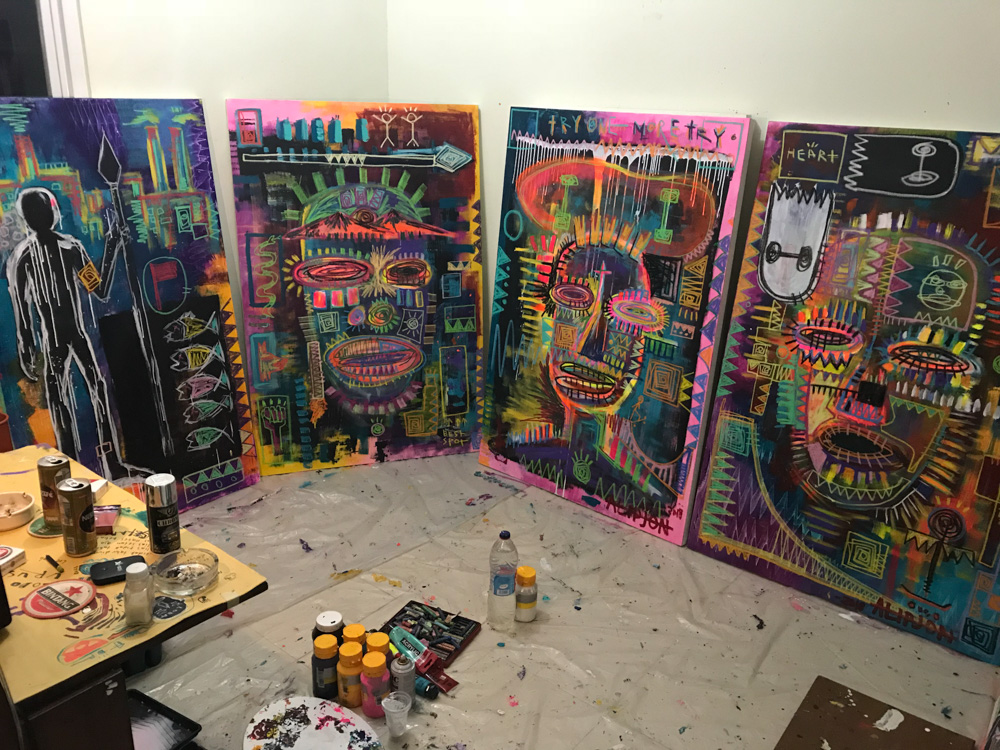 Eventually, he went back to Jakarta, which he considers a more artistically inspiring place to live. While Bali has its fair share of transplants from neighbouring islands (and other countries), Alipjon still calls Jakarta home. “I’m not going to live here [in Bali],” he laughs. “I just want to chill and make artworks and refresh my mind and then go back to Jakarta.”

This time around, Alipjon is visiting Bali for a collaboration with a local skate company called Televisi Star. He has designed a t-shirt for the label, which is owned and operated by OG Indonesian skater Indra Leonardo. The pair met at a skateshop in Jakarta where Alipjon had painted a mural, and the collab came about on the spot.

“Indra was my idol when I was a kid,” Alipjon says, explaining how he’d first heard of Indra via a Volcom documentary called POL, which presents the journeys of three different skaters who move to Bali to make a career out of skating. “Indrah was the wild party guy,” Alipjon laughs.

Collaborating on commercial art projects with brands like Televisi Star and Insight seems an appropriate fit for Alipjon, but he’s selective about who he works with. He says he’s uncompromising when it comes to retaining total creative control; if a client wants to have input about what Alipjon will paint, he probably doesn’t want the job. “I’m like, ‘Just call a fucking decorator, man. Don’t call me.’”

Evidently, this approach has its drawbacks: “Many people hate me,” says Alipjon. “They tell me I’m cocky and I’m arrogant, but I don’t care man, I just do my painting and my work.” Obviously, Alipjon has his supporters too. In September 2017, he had his first solo show in Jakarta. It was called NO IMAGINATION and while he managed to sell a bunch of works, he says the best result was that since then, other young Javanese artists have been putting on their own solo shows in Jakarta.

After our interview, we grab some food from a little warung (restaurant) and then a couple of beers with Indra from Televisi Star. Indra is hyped to talk about Televisi Star, the skate scene in Bali, and to have Alipjon collaborating with him. He shows me some Instagram stories of Alipjon the night before, drunkenly dancing around the bar. “He’s actually a pretty good dancer,” Indra laughs.

I soon have to leave but arrange to meet them later at a bar called Pretty Poison, where there’s a big pool-style bowl out the back and a skate session a few nights a week. I arrive to find Alipjon limping and nursing his right arm. His arm is so sore that he can’t even shake my hand. It’s obviously bad but he plays it down and is still out partying when I head home at 3 am. 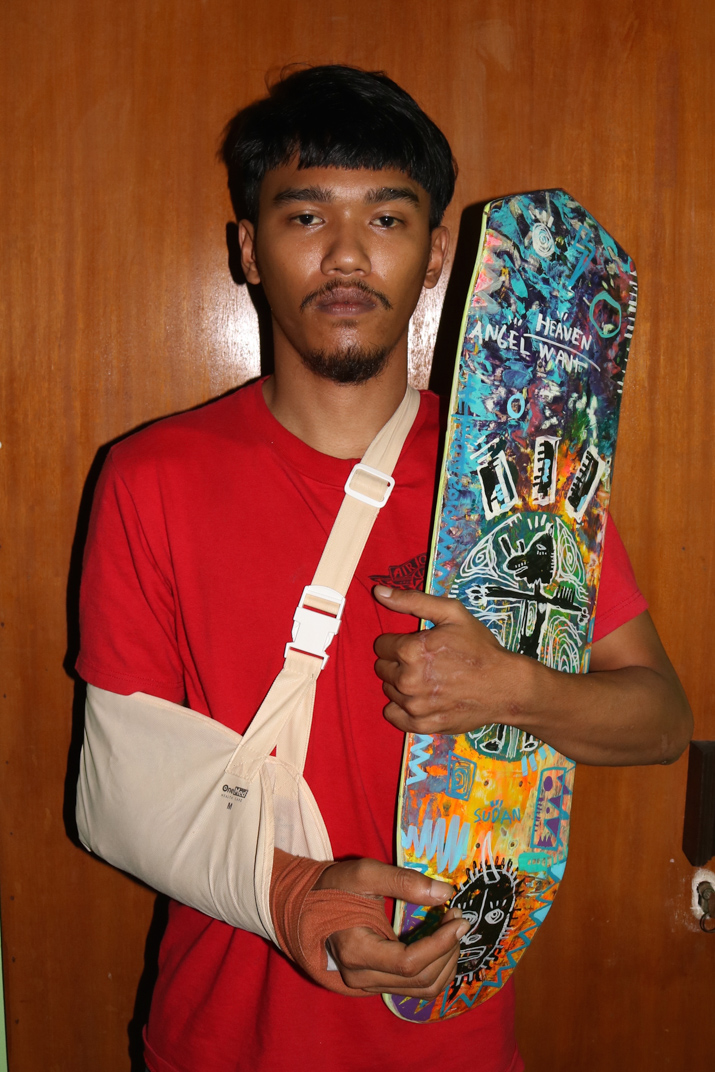 A few days later, Alipjon’s right arm is in a sling: his radius is fractured. “I went to the public hospital,” he says, then lets out a guttural groan: “Euuuuggghhh.” His arm will have to stay in a cast for a whole month, which means that for now, drawing and painting are out of the question. It seems that Alipjon’s mantra about staying productive and “turning imagination into action” is taunting him. Not being able to make art must be incredibly frustrating. I ask him what he’s going to do while he can’t work. “I think it’s time to start learning to be left-handed.”