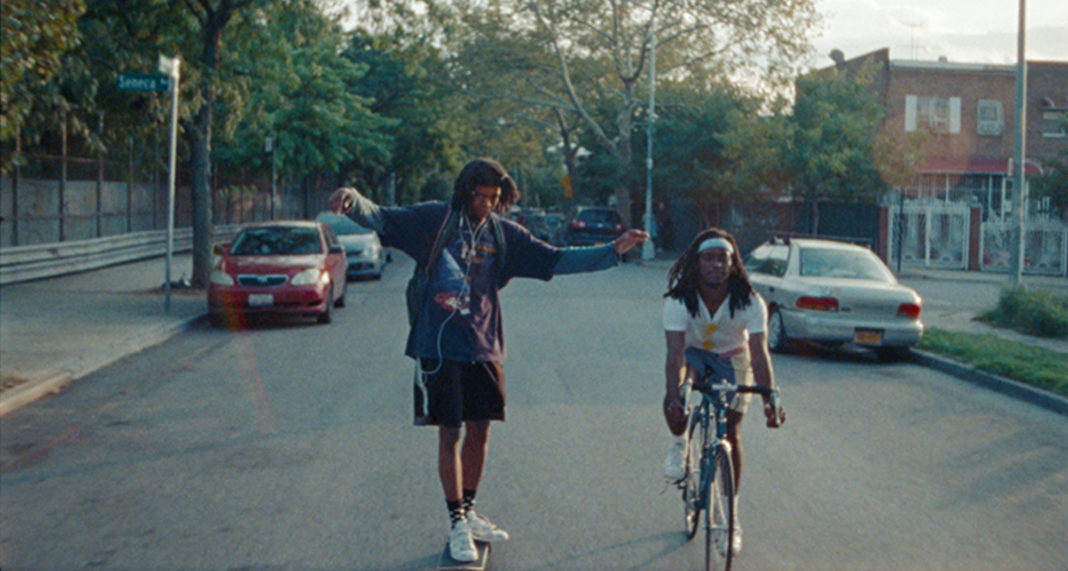 Australian photographer James J. Robinson has got a way with light.

The young creative’s subjects, bathed in the golden hues of sundown or late-night neon, look like frames pulled from a movie screen. Which makes sense, given that filmmaking was his first love, with photography being a natural extension of his story-based approach to creating art. Whether pulling references from some of his favourite realms of Asian cinema or single frames from film classics, capturing his group of close-knit friends at work in their own studios, or even shooting big-name celebrities on VHS in intimate, rarely seen moments, Robinson’s work is the kind that will latch itself onto your brain with ease.

Now based in NYC, Robinson continues to bulk out his already impressive list of clients and collaborators, working with adidas, The New York Times, Vogue, DC and more. And, he co-founded creative agency AEVOE in his teens, at an age when the rest of us were figuring out to pass high school while exerting the least possible effort. Despite the constant downpour of projects, Robinson took some time out to chat cinematic inspirations, evolving past defunct Tumblrs, and finding happiness in juggling work, below.

How would you explain where you grew up to someone who’s never been there?

I grew up in Melbourne—I’d say it’s a city that you can get what you need out if it. If you want to work hard there’s room to grow and be rewarded; but, if you want to relax and are happy where you are, it’s very comfortable and easy to feel settled.

How did you first get into photography and filmmaking?

I think it was when my sister came home when I was 16 and put on Bande à Part, this French New Wave film that she was studying in her French class. I just remember being extremely bored, but still somehow totally engaged because I’d never seen anything like it. It encouraged me to look more into foreign cinema and it sparked my love for Asian and European films. It was the first time I realised that film was a medium that you could experiment and evoke such direct emotion with. My whole life until that point I had been mostly interested in literature and music, and I realised that the medium was a way that you could work all of these different mediums into one package. From there, my love of photography developed as a kind of deconstructed approach to film.

What’s the first photo you took that you remember being proud of?

A photo of my grandmother for sure. I think about it all the time—up until that point I was always shooting things that I thought would suit my now-defunct Tumblr: white girls reading Penguin Classics, Doc Martens next to broken bottles of alcohol on the ground. I shifted my lens instead to shoot something that I genuinely had emotions for. It’s just a shot of my grandmother, avoiding eye contact with the camera and in the middle of telling me not to take her photo—it’s just so unfiltered. I gave a print of that photo to my Dad the Christmas after she passed away, and it’s still hanging in my family home.

What is one of your favourite photos, films, or series of work that you’ve created?

While I was in Melbourne earlier this year, I did a series where I shot 30 of my favourite friends in a way that I thought captured them the way I see them. It was mostly a personal project so I could print all the photos off and have them on my wall in New York, but it turned out to be the best excuse to make the time to see all of my friends and put some energy into showing how much I love them—hiring lights, paying for cool locations and outfits. I’m sending all of them the negatives because I want these photos to belong to them and not me. Moving to the other side of the world inevitably made me feel like I might lose these friendships in the long term (and luckily that shows no sign of happening yet), but it was important for me to immortalise who these friends are and how much they mean to me at this moment.

Do you have a dream project or collaboration?

The ultimate dream is to be writing and directing my own feature films! I’ve already written a handful and have such a clear idea of the first ones I want to be making. I think of my whole career as a stepping stone towards this point. The dream is just to be working on a film where I’ve got all my friends behind the camera with me; working together, sharing their ideas and being paid to do it.

What was your inspiration and thought process behind your recent shoot for DC?

Because of my background in film, the way I approach every shoot is by building a story and finding the images within that. It’s how I approach every ad job, editorial, album cover, etcetera. I never studied photography and I think that’s what makes my process so different, because I don’t think of my shoots as images, but stories instead: where we have characters, narrative arcs and tonal shifts. The DC shoot was about building a story around a couple staying one night in a rural motel. When I think of the DC brand, I think of this abrasive, youthful energy that is really captured in one of my favourite teen movies, the 1999 Swedish film Show Me Love. Aesthetically, the shoot really grew from the colour palette and energy of the film, and one of the shots (of the models in the back seat of the car with raindrops lining the windows) is a direct reference to my favourite scene in the film.

What is an image that has stopped you in your tracks?

I don’t know if it counts as an image, but the opening sequence of this Mexican film Post Tenebras Lux comes into my mind literally every day since I saw it in 2013. It’s this shot of a toddler running around a field in Mexico during sunset while these dogs round up some cattle. It goes for like seven minutes, gradually from the start of the sunset until it’s pitch black and a storm sets in. I don’t know how I feel about it… I don’t know if it’s super cute, really ominous or absolutely terrifying. The cinematography is so beautiful and the acting from this kid is totally authentic. I’d be so proud of myself if I could ever make something like that with so much depth and beauty.

What is one experience you’ve had that impacted your photography?

I think going to Berlin and experiencing Berghain at 9 am for the first time really changed my life and the way I shoot. Just kidding! I can’t actually pinpoint a specific experience that’s impacted my photography because I think every experience I’ve had, even super insignificant, affects the way I view things and therefore the way I shoot. I think a really life-changing moment like moving overseas runs in the back of my mind when I shoot, just as much as noticing the graceful posture a friend might have when they sit.

When are you happiest?

Juggling 10 projects in a week. I like to complain about the stress but deep down I love being so busy.

What has been inspiring you lately?

I’m reading Helen Garner’s Australian classic Monkey Grip for the first time and her writing’s really affecting the way I think at the moment. My roommate/best friend was trying to get me to read it for years but I finally felt homesick enough to tackle it. It’s really easy for me to find inspiration from books where the writing is so poetic because you can interpret their writing visually in your own head. It always helps me come up with shots and lighting setups while reading. Monkey Grip’s so great because Helen Garner is so talented at finding the poetry in the most infinitesimal, daily moments.