When he first appeared in Slap’s One In a Million 2010—the closest thing skateboarding’s come to a successful reality show—Chris ‘Mango’ Milic was an anomaly.

He made jokes about his skateboarding but had serious skills; he was never going to ‘win’ the big prize, but he was everyone’s favourite. Since then, Milic has released a series of amazing parts, spent a stretch of time in New York and carved out a niche by just being himself. In 2017, he started Frog, a company that has become a sort of pillar for fun, inclusive, creative and cool skateboarding. I was stoked to talk to him. 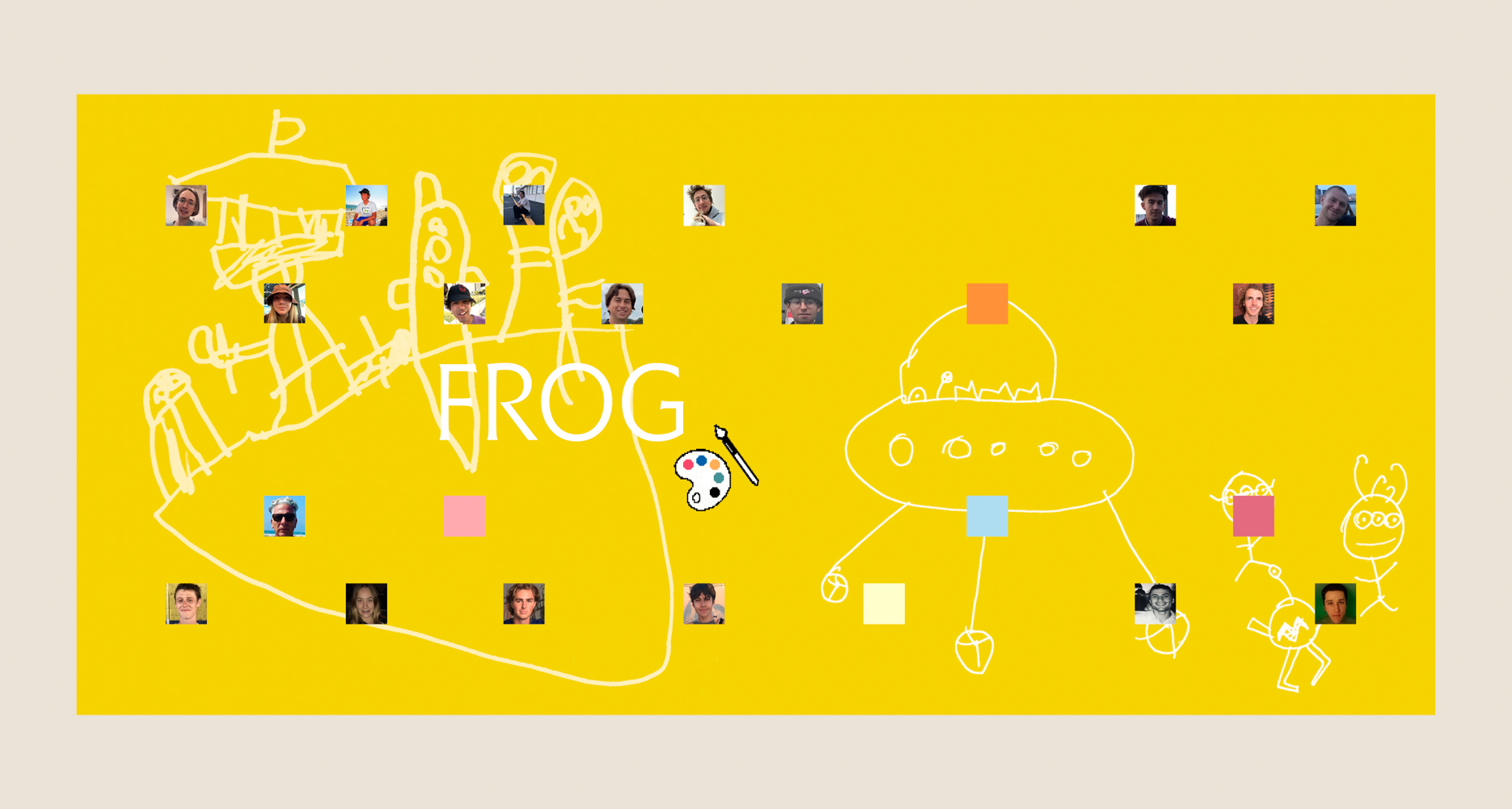 What are you doing right now?
I’m skating in San Francisco. I’m on a trip with the Frog Skateboards team. We just got here yesterday and we’re kind of messing around today.

I used to go to McCarren Park a lot, and all the cool kids there were riding Frog boards. There was this nice, friendly vibe with them, and it seemed like a new feeling in skating.
Yeah, Frog is definitely more friendly. I like it to look like your friends, even if you don’t know them, instead of some pro skateboarder who’s kind of untouchable or infamous. Everyone on Frog is sort of a normal guy, instead of some superhero. Everyone is really nice on the team; we just all love to skate!

You love to shred.
I think everyone on the Frog team has a special passion for skateboarding that can be seen through the brand. It doesn’t seem like a company, you know?

Or maybe it’s not so guarded. Like you’re allowed to be excited and happy about skateboarding. It seems to be part of something larger happening that’s really good. So, well done.
Thanks, I’m glad you see it that way. McCarren’s really fun, too. The first Frog office and warehouse was next to the park in that brick building right on the corner. It was really cool because I could skate at the park a lot.

How did the brand start? Was it a planned thing?
It was kind of unplanned, actually. It started out as a joke. I was riding for another company [Welcome] with Jesse Alba and we quit because all our other favourite riders quit the team. I’d been writing and drawing frogs and we were just joking around, like, (groaning) ‘What are we gonna do? We’re gonna have to ride for Frog.’ We thought we were going to get boards from 917, Alex Olson’s company. Our friend Logan Lara had just become the team manager and we were like, ‘Logan, you gonna hook us up with boards?’ He’s my good friend and he’s like, ‘Nah, sorry. You guys should just do Frog.’ I was confused for a bit, but then I decided to do it. I asked Jesse, ‘Are you down for Frog?’ and he said, ‘Yeah, let’s do it.’ So, I started drawing graphics for Frog and made some t-shirts and stuff. Then it just kept going and we ended up making videos, then the boards started happening. We just hit five years of Frog, which is crazy.

Did you have a background doing graphics or art?
Yeah, I used to make a lot of art when I was in high school, then I kinda quit… oh my god! Sorry, my friend just got a trick.

What happened?
Can you see the mini ramp in the back here? He put this sketchy metal rail down the other side, then just dropped in and flew out to 50-50 down the rail.

Wow, who was that?
Nick Michel. He’s really, really good.

He’s amazing! So, you had a background in making art. Was it a similar aesthetic to what you use for Frog?
I made a lot of art in high school, then I kinda stopped because I got really into skateboarding. I didn’t even get good at skating until after I graduated high school. Then I visited New York when I was 21 and met a couple of people who just made art for a living. I was living in Arizona and there’s not much going on over there for art, at all. I was like, Woah, these guys do this for a living? It’s kinda like their job! It was really inspiring, so I moved to New York to become a painter. With the aesthetic thing, my personal artwork is a bit different. But some of the stuff I do for Frog is very stupid. Sometimes they’re just clipart-looking things from the internet, or just really bad drawings made on the computer, which I think is funny and has a unique style. We have made some pretty dumb graphics.

I’ve heard people saying they don’t even get it, and ‘why are these graphics so bad?’
I hear some people talk about it like, ‘It looks like my little sister made it,’ which, I think, is really cool. I think the graphics should look like anyone could make them. I hope it’s inspiring anybody to do it. Like, you could do it, too; your sister could make it. I think people always miss the point there. They’re angry that anybody could make the graphics, but why are they angry about that?

There’s also that bad boy thing in skateboarding that’s still pretty prevalent, that your stuff is a reaction to. Or are you just presenting what you think is cool?
I never put anything out as a response to anything else, but yeah, there are definitely some brands out there that have a heavy clout type feeling, like Supreme and Hockey. With those brands, everyone seems so untouchable. They’re all really amazing skaters…

They’re your friends, too.
Yeah, for sure. Someone like Ben Kadow is one of my favourites. He’s a really goofy person, but he’s portrayed as a crazy punk-rock skater. If you hadn’t met him, you might think he’s really serious. But also, not a lot of thought goes into the Frog stuff. A lot of stuff is done last minute. Maybe that makes people mad, too. We just go with the flow and it’s been really fun over the last five years. 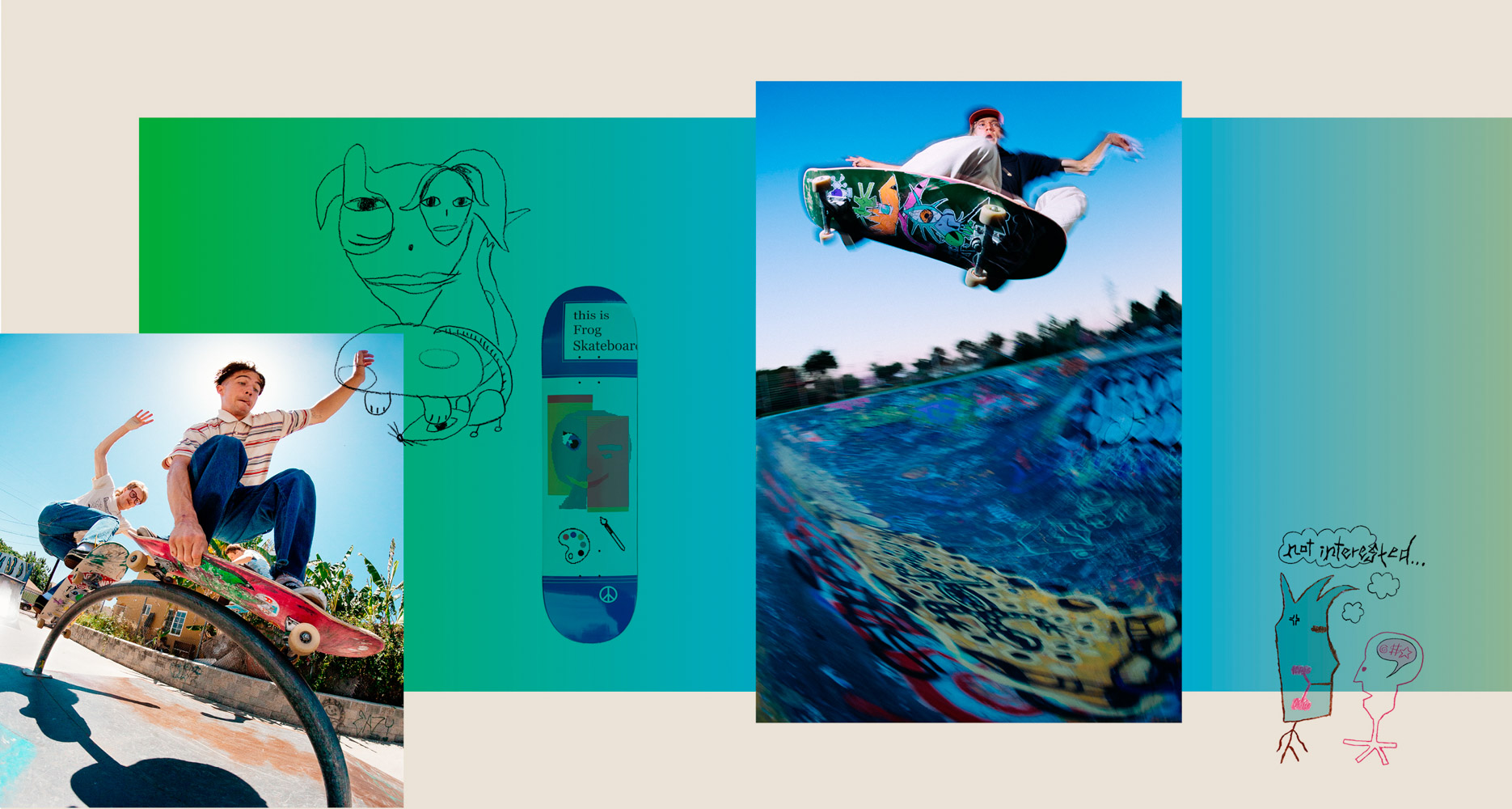 So, you and Jesse are now riding for Pontus Alv’s shoe company, Last Resort. How did that come about?
Ever since I started Frog, Pontus has been wanting to get involved with it somehow. He really likes Frog and we really like Polar—everybody likes Polar, but we were talking and we just admire each other’s brands. We’ve tried to work together in the past but it’s never clicked, but recently when he started the shoe brand it was like yeah, I’m so down to do it. I’ve admired the videos that he’s made for a long time, and it’s an honour to be on the skate shoe program with him and Jesse. I’ve been skating with this other guy named Nick Rios who’s from California but he’s been living in Portland. He’s been my favourite skater to skate with recently and I’m happy we’re all doing this shoe thing together.

Who else is doing stuff that you like? What are you interested in at the moment?
My friend who I grew up skating with a lot, Stephen Ostrowski. He just started a queer skateboarding company called Glue. He’s always been so creative and made his own clothes. He makes a lot of cool artwork, and I feel like he’s never fit in anywhere because he’s such an individual. It’s really cool to see him doing his own thing.

He was also a big part of the market that was going on at McGolrick Park last year with Aaron Wiggs.
Oh yeah, he was. I had left New York at that time, but that looked like a really cool movement and they were raising a lot of money. It was a pretty amazing thing.

A couple of years ago, it seemed like you and your friends got really into skating transition. Was that something you’d always been into or was it a new challenge?
I’ve always been interested in skating transition since I was like, 20, and I’m almost 30! So, when I was 20, I really wanted to learn how to skate vert. I watched a lot of old videos and my favourite skater at the time, and maybe my favourite skater still, is Nolan Johnson—he’s such an amazing vert skater. I just wanted to learn how to frontside and backside air, and just skate all that stuff. Right when I started getting into it, I moved to New York, and it became really hard to skate that stuff. It wasn’t the same; you couldn’t just go to a skatepark that had big transition. There’s a few, but in New York you get so caught up in doing so many different things all the time. It’s hard to have a regular routine where you can go and skate that stuff once a week. Then I got burnt out on New York for a little bit and moved to LA. I’ve been trying to skate vert more here, but even in LA there’s not the best skateparks, either, which is funny because it’s the skateboard capital of the world. It’s just a lot of street skating and all the skateparks are street plazas. So funny. But I’ve been trying to skate more transition.

I love watching it, and I would really love to do a backside air.
I dream about skateboarding a lot, and the only tricks I do in my skateboarding dreams are airs. I’m skating a vert ramp in my dream and I’ll do some cool-ass air, like a stalefish. Ever since I started having those dreams two years ago, I’ve known I need to skate more vert. 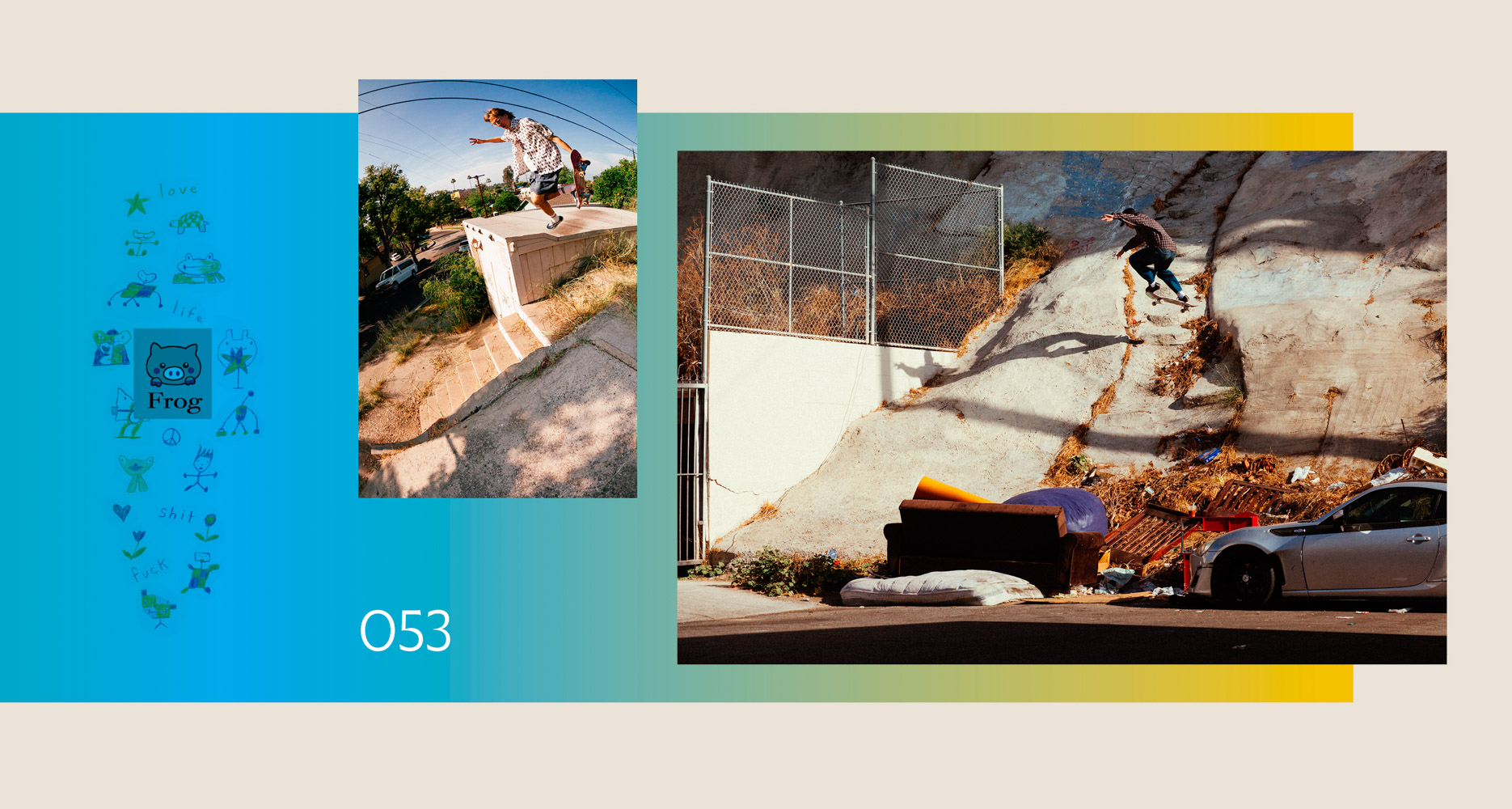 Fulfil the dream.
Dude, I need to skate like that. I want to. I’ve been pushing myself to do bigger backside airs and better frontside airs, and just learn to skate that stuff. It’s also the most difficult thing to skate for me, I think. So that also makes it the most fun.

You’re a master of transition and manuals, which are the most difficult types of skateboarding in my opinion.
Yeah, I don’t even know. The backside air is the coolest trick. I learned it a long time ago but I’ve been trying to perfect it. You can learn it too; it’s so easy, actually, once you figure it out. There’s a trick tip on YouTube with Bucky Lasek. All you do is kickturn with a nose grab, higher and higher, then you start doing backside slash nose grab when you reach the coping, then you just start lifting it over the coping a little bit. And that’s all there is to it. You just have to do it a lot of times, repetition, then it starts working. It’s really cool.

So, you’re not leaping into the air at all to begin with?
No, you just keep pushing your kickturns higher and higher, then your wheels will bonk off the coping and you’ll do your first backside air.

Wow. Do you need vert?
A little bit. A steep quarter pipe definitely helps. But I swear, you could do a really small one after a couple of sessions, and you’re gonna be really stoked.

I will try that. Thank you for the trick tip, via Bucky.
For sure.

See more from the Jonah Hill Guest Editor Issue of Monster Children by picking up your copy here.