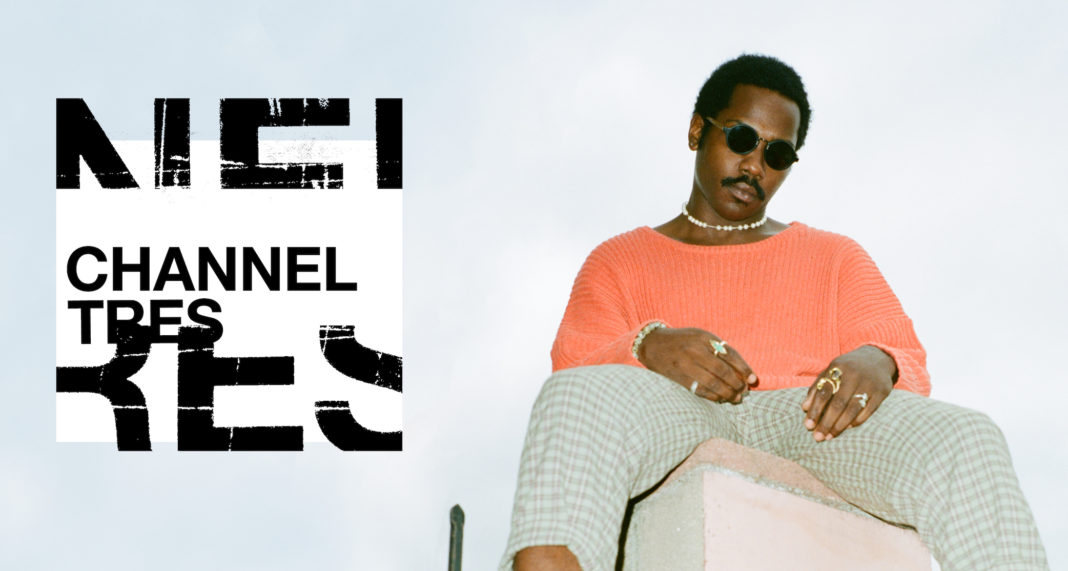 With a smooth baritone voice and rhythm that betrays an early start with the drums—his great-grandparents bought him a drum kit at age five—Channel Tres is on a steady ascent to becoming a household name in music.

Fans of his self-titled debut EP include Elton John, Anderson .Paak, Disclosure, and probably you, once you go check him out. Drawing inspiration everywhere from Detroit techno to gospel music, Channel Tres has made the transition from bedroom jams, to producer, to solo artist with a self-assured coolness and a razor-sharp focus.

This year you’ve toured the US with Vince Staples and Robyn, and been across Europe and Australia. What does being in new environments do for you musically?

It gives me a chance to see the music come to life, ‘cause when you’re listening to it and working on it, you have an idea of what you’ve made, but sometimes when you perform, things come out of you. You start to find new meanings for the song, see where different moves resonate with audiences. When I’m practicing for choreo I’m learning everything, but onstage I start to see moments where I can do something more creative, make it more entertaining.

I’ve heard that you used to psych yourself out of opportunities to perform, which is hard to believe because you look so comfortable up on stage. What was the turning point, when you finally pushed yourself to do it?

I think just getting around more friends and having the right people around to critique me. My team, they critique me a lot and tell me I’m doing good or just… you know, have other people see it in me, to give me the confidence. And then watching footage after every show of myself.

Just to perfect everything?

Yeah, to see where I’m messing up, or what I can get better at, and to see what I did good at.

So, the theme for our print issue is travel and I want to ask you about some of your favourite spots in LA, but I also thought it was pretty fitting because you’ve said that you had to literally travel away from where you grew up in Lynwood and Compton in order to get to where you are now. Can you tell me a little bit about that?

Growing up in my environment, sometimes people know you for a certain thing, so they only ever approach you as that. Being around familiar things all the time where you grew up will cause you to be a certain way; make you feel like you can’t get out of a certain mindset, or, you know, your beliefs are limited because they’re based on the area where you grew up. Moving away helped me to be around people that didn’t know me, and that allowed me to create the person I wanted to be. It helped my creativity a lot too, because now that I took that time for myself to get better, the stories I want to tell about how I grew up and what I’ve been through, I can illustrate them better and tell them better because I have the language and the musical skill to do so. 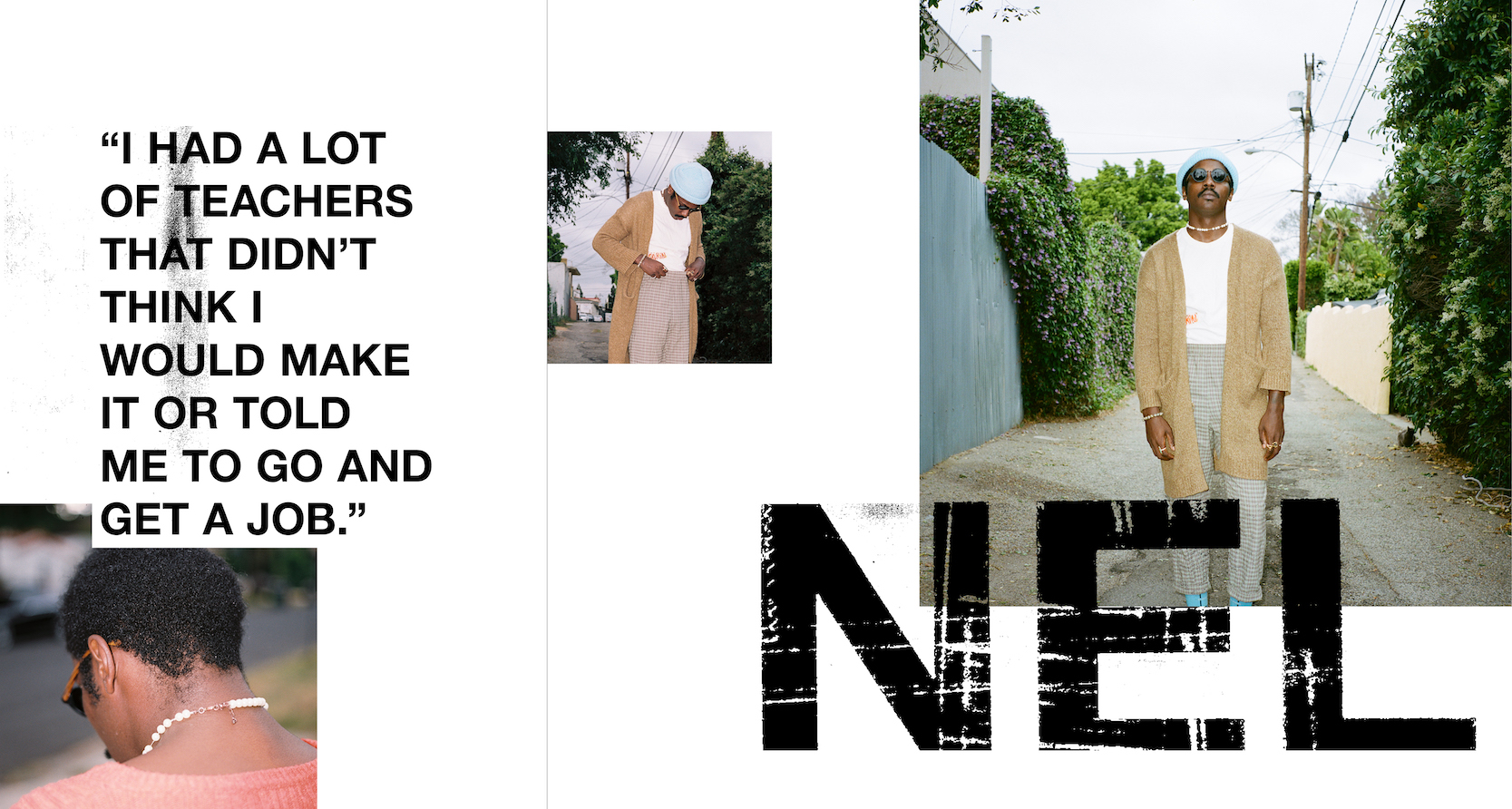 Was it the move out to Oklahoma for college that gave you that perspective, to mature and grow a bit?

Yeah, well, before that I was hanging around a lot of people that did music, but people didn’t know I could sing or write, so I would get looked over a bit. I knew I needed training and I went to a music school so I could learn the language of music, but I was doing everything off natural talent so I didn’t understand why I wasn’t getting taken seriously. When I started learning theory and the language of music then I started understanding, ‘Ok, this is how musicians are thinking.’ Being in Oklahoma helped, because I was by myself and I had no one to try and impress but myself. It taught me how to be alone and how to think of myself as a project—of course I’m a person, but my skills make me the artist I am so I just had to learn how to perfect those skills and practice. What challenges you now when you’re making music? I think maybe getting out of my own way; letting the music tell me what it wants to do. I have so many things to say and I have so many things I can make, so I think the biggest challenge is knowing if something is good or not… but usually I can tell.

Do you work on a bunch of tracks or try and focus on one project at a time?

It depends on the job. Sometimes I have a remix due and I work on that, or when I am creating—like with the recent project—I’m making like three, four, five songs a day. I had a bunch of songs to choose from, and then I’d pick some of the ones that really stood out and get them to a good place so I can put them out. But my favourite part is when I’m starting something and I can just make whatever I want.

Were you working on music when you were on tour?

Yeah I wrote ‘Sexy Black Timberlake’ while I was on tour with Robyn.

That’s cool, because I’ve heard a lot of musicians have to be in that studio mindset and they find it really hard to write when they are on the road.

Yeah, well, I’m a Gemini and from the first part of my life, from like seventeen years old to about twenty-four I was always moving around, ‘cause you know, I’d be in college, so when the semester was up I had to come back home. My family moved away from where home is, so I was staying at other people’s houses and then once I graduated from college I was kind of homeless. So, I was living at the studio, I was staying at my sister’s house for while… I was just used to moving around. I would go to Starbucks and make music, I would go to other people’s houses and make music. The way I learnt music was, like, always moving around. Music’s my job, so I always wanna have my ears up. If I’ve got something in my head, I’ll just record it. Even if I can’t work on it then, I’ve got the idea down so maybe I can work on it back at my desk.

You must be super motivated.

Yeah, I mean, I don’t have nothing else to do. I quit my job, pretty much set my life up to make money off my music, that’s what I do. You know, if I was doing anything else I’d be driven to do it as well: if I was a janitor, I’d be trying to figure out how to be the best janitor. This is my passion. It’s not easy, but it’s not hard for me to get up and go to the studio; I don’t dread that at all. I just feel lucky that I have music.

Yeah, for sure. And was it nice to come to Australia for the first time and see the reception you got?

It was beautiful. Beautiful. It was my first tour; it kind of spoiled me a little because everybody showed up and had a really great time. Sometimes people don’t know you, they’re trying to figure out if they like me or not, and I’m okay with that ‘cause usually it turns out that they like it, because I always do a good show. My music is really different, and the way it’s set up is really different, so it probably takes a bit of time for people to wrap their heads around it.

Three is your favourite number, so if I was coming to LA where’s three places I should go for live music?

Church. Go to a black church, preferably in South Central and Compton. The musicians there are crazy, it’s a good experience. They have jazz clubs–I can’t name any of the top of my head, though–and Leimert Park. They have drum circles there, it’s awesome. 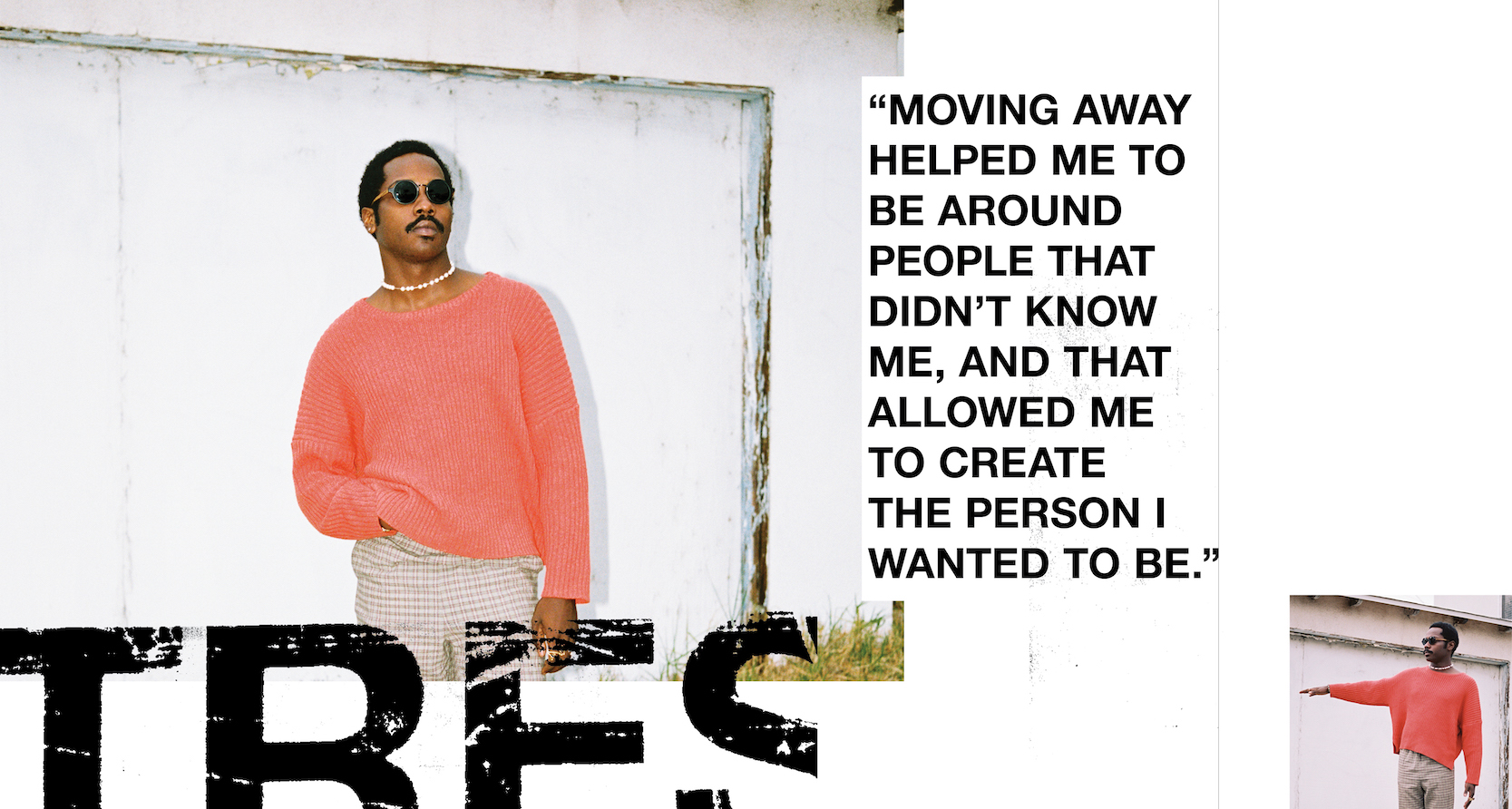 Do you feel lucky to have that early start in church, growing up around incredible musicians every week?

I wouldn’t say lucky, I’d say blessed. Because not only was it music that I was given, it was empathy and love, being selfless. And that music… it’s from you because you’re the vessel, but there’s a higher power that helps us with the vibrations. That’s what I’d really take from it. And because you’ve got really good style, where should I go for clothes? Goodwill, Salvation Army and like, any vintage store. Man, I wear women’s pants and everything, I sew, I add stuff to my clothes… yeah, dressing is pretty easy for me.

Okay, and give me three places to eat.

And there’s this place called Dulan’s, it’s soul food. And I like to eat Thai food, any Thai food.

Alright, one last question about your fan Elton John. Did he pass on any knowledge when he FaceTimed you?

He just gave me reassurance that what I’m doing is special. And just to be calm; I think I was having some issues with some stuff that I had made, ‘cause some songs I’d made with people never came out. But he just said that it’s ok, he’s made millions of songs for other people that never came out, and it was ok, he still worked with that person, it’s all good. It made me calm about my journey… If he can make it all the way to where he is, I’ll be fine. It was kind of like an omen, ‘cause I had a lot of teachers that didn’t think I would make it or told me to go and get a job. Him calling me and inviting me to his show, wanting to meet me and taking a picture with me and saying I was one of his favourite people, it kind of made all of that doubt and negativity go away, and made me realise I’m on the right path. The tick of approval from Elton John. Yeah, he made a point to call me, and I think that puts me in a nice spot with the music gods.