Chad Unger is a brilliant young photographer who happens to be deaf, which meant our interview involved an interpreter.

We did it over Zoom. Chad could see me, I could see Chad, but only Chad could see the interpreter, who for me was a disembodied woman’s voice. It was cool because she was genuinely laughing when Chad was laughing (there were some laughs), and it felt as though he and she were one and the same. I guess that’s the hallmark of a good interpreter: you forget they’re there.

In addition to being a brilliant young photographer, Chad is also a keen snowboarder—but we didn’t have an interpreter for that, I just had to pretend to know what ‘pow’ and ‘corduroy’ was (LOL). Another thing about Chad: he’s gay and recently came out to the snowboarding community. We talked about that, and we talked about his photography, which needs no introduction as you can see it all around you on these pages. Please enjoy my conversation with Chad Unger.

Hey, so you know Warren [Smith]?
Yeah, I know Warren. I met him through a photo gig.

Yeah, with Cole Barash.
Yes, that’s right. I worked for Barash but Warren was there as well as second photographer for that gig, and that’s how I met him. I met Barash through my snowboarding job. He used to be a snowboarder, and so I met him through a snowboarding gig then he reached out and wanted me as his assistant for a photo gig, and Warren was there.

You still snowboard, right?
Yeah, for fun. I still work within snowboarding, etcetera, but I’m more growing towards what Warren and Barash are doing.

Did snowboarding come first and then photography?
Yes. Hey, I just want to be sure that the interpreter is clear because she doesn’t know who I am or what I’m talking about. She’s trying to interpret what I’m saying, so it’s kind of funny.

Oh okay. So, Chad, you’re a multi-millionaire professional snowboarder and that’s why we’re doing the interview. You’re very famous and have a tv show.

Hey, do you know who Chris Boadle is?
Yes, I do. 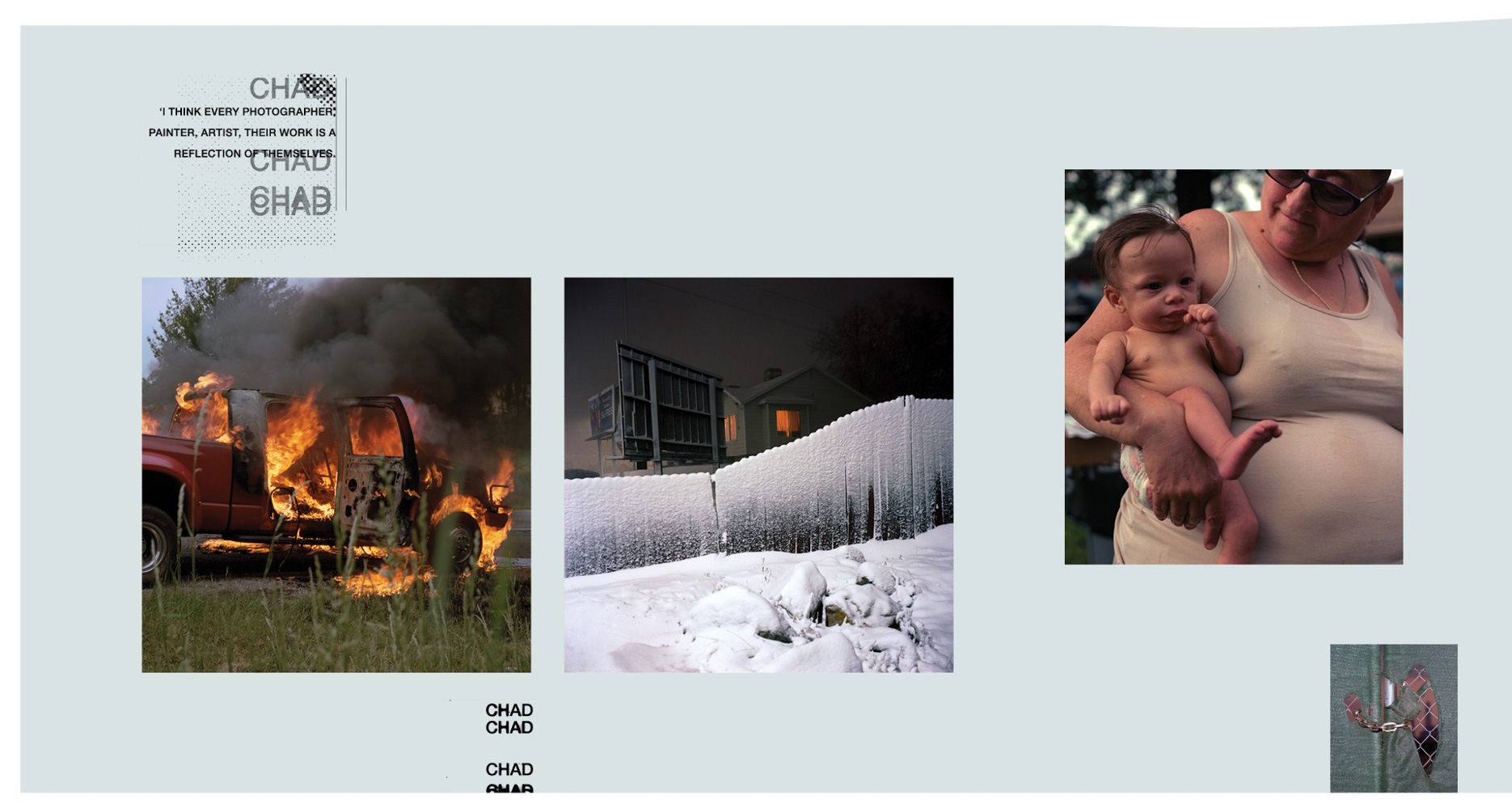 Okay, cool. That’s cool. So, when you were snowboarding, did you break any bones?
Yeah. I was snowboarding a lot and doing a lot of filming and photography, and then I broke my left arm and had to have surgery. After that, I was like, ehh. I couldn’t snowboard, I couldn’t do photography, I couldn’t film. I was really having a hard time and I was like, maybe my identity as a deaf person and a gay person was bigger than being a snowboarder. It was an interesting moment for me, you know?

I guess you’ve been asked this before but it’s worth asking again for our readers. I imagine it would’ve been difficult to be a snowboarder and deaf, but then to come out as well. Can you talk about all that?
Yeah, for sure. So, I was already having a hard time communicating with snowboarders in general. Now, being gay, I was afraid of being rejected even more or I wouldn’t be hired for certain things, or maybe they wouldn’t be friends with me. I was already having a hard time communicating and then adding being gay to that, a lot of people don’t want to be friends, you know? So, I had to get in touch with some people or snowboarders who are gay but haven’t come out to everyone. I met up with some of them and I realised that I would be fine. I would be okay. I still have the support of this group, so that was nice.

When did you come out in the snowboarding world?
I guess about a year and a half ago. Pretty recent. During the pandemic. Torment Magazine focused on LGBTQ Week in regards to snowboarders who were still in the closet, but coming out and showing the snowboard community. I was part of that event.

And that was it? That was kind of the reveal?
Yeah, pretty much. Well, no, I came out to my family and my friends before that but to the snowboarding community, no. I never said anything until that event.

Okay, cool. I’m glad we covered that. That was important to talk about.
(Laughter)

Do you think you see the world differently because you are deaf and does that inform the look and feel of your work?
I’m not sure. The more I think about it, I think every photographer, painter, artist, their work is a reflection of themselves. It’s an extension of themselves. So, I think without me trying, my work still reflects who I am. I guess I don’t see better than hearing people or I don’t take better pictures. It’s just who I am, so I guess I’ve never really thought about that but since you mention it… That’s interesting. Maybe that’s true. I was born deaf and into a deaf family. I have two deaf sisters, my parents are deaf, my exposure is fully deaf. But I had full access to language. I went to a deaf school and graduated from a deaf school. It’s not like I struggled or had difficulties that much—I was in that world where everyone spoke my language, if that makes sense. So, I never really viewed my work as ‘I did this because I’m deaf.’ No, it’s not like that. It’s just who I am. 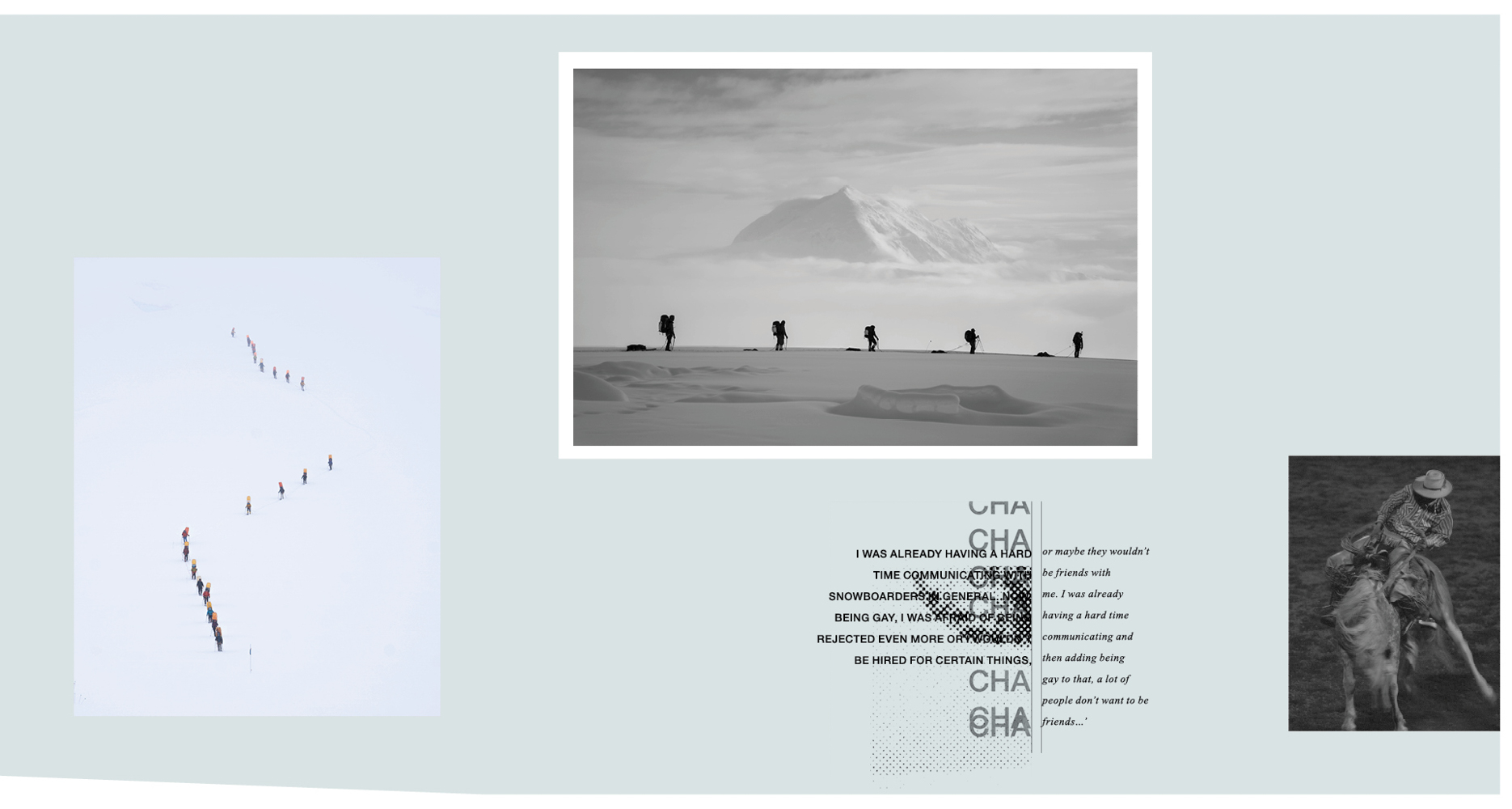 Tell me about that one series of photos—I think it’s called Schedule One—where there’s marijuana plants and stuff. What’s that?
So, the story behind that is I worked as a trimmer, a marijuana trimmer. I did my little side hustle for photography work. I wanted to focus and film and snowboard and whatever, so I trimmed to earn money. I really didn’t smoke anything. I don’t have anything against weed, but it was just a side hustle for some cash. Then after the second or third year, I was like, huh. That culture is so interesting. It’s gone from illegal to legal and people are coming from other countries. The environment where they’re coming from, maybe there’s no regulations or whatever so it just becomes an assignment. It became, a series that I wanted to explore, so I did a bunch of photography. I’m still not done with that, I’m still working on it.

A couple of questions about trimming. Does it pay well?
Yeah. It pays pretty well. Really, as a trimmer, it depends on how much weed you can trim every day. If, say, you aren’t that good of a trimmer or you’re lazy or slow, you’re going to make less money. If you sit there all day and just trim away, you can make some cash, so really, it’s up to you.

Were you a good trimmer?
Me? Yeah, I was a pretty good trimmer, but I’m not proud of it (laughs).

When you take a photo, are you one of those photographers who is like, ‘Okay, I’m going to go and take some photos today,’ or are you constantly looking for photos?
I think both. I think really it just depends on my mood. Sometimes I’m just walking along and I’m like, ‘Whoa, that would be a good picture!’ Sometimes I feel like, ‘Ugh,’ I have to get out of bed and work for it because sometimes you can’t wait for it. If you just sit around and wait on your phone or TV or whatever, nothing is going to happen. More and more, I seem to be looking for it. I may make more plans for it, like going to a specific area for a specific reason for a photo op or things like that.

Who are your favourite photographers? When you started shooting, who did you look to as like, ‘That person is amazing, that’s the lineage that I want to be a part of’?
So, I started photography because of Tumblr. I started following some people with interesting photos and checking out what photography equipment they were using and then I bought that same thing. I don’t even remember who those people were, but, but that’s how I started.

Are you cognizant of being a gay, deaf photographer… is that what you want to be seen as? Or are you like, ‘I’m just a photographer’? How important is that to your identity and to people knowing?
That’s a really good question. I would prefer to be seen as a photographer, but apparently it seems that everyone keeps putting together the facts, so I try to separate them, but it’s not even possible at all. I don’t know. That’s a really interesting question because I just had a conversation with my mother in regard to that. Like, how do I keep that separate? It seems like they’re integrated.

Yeah, you are a good photographer. What’s one photo you wish you had taken? Do you have a favourite photo that was taken by someone else and you’re like, ‘God, I wish I’d taken that?’
That’s a good question. Let’s see. I would say one from Stephen Gill’s book, it’s a photo of inside a fish’s mouth. It looks like it’s from another planet. The book is called Please Notify the Sun.

Final question: If you were only allowed to have one camera, which camera would it be?
If I could keep one camera… it would be my Mamiya RZ67.

Nice. Thanks, Chad.
Thank you.

To see more from the 2021 Monster Children Annual, grab a copy here.