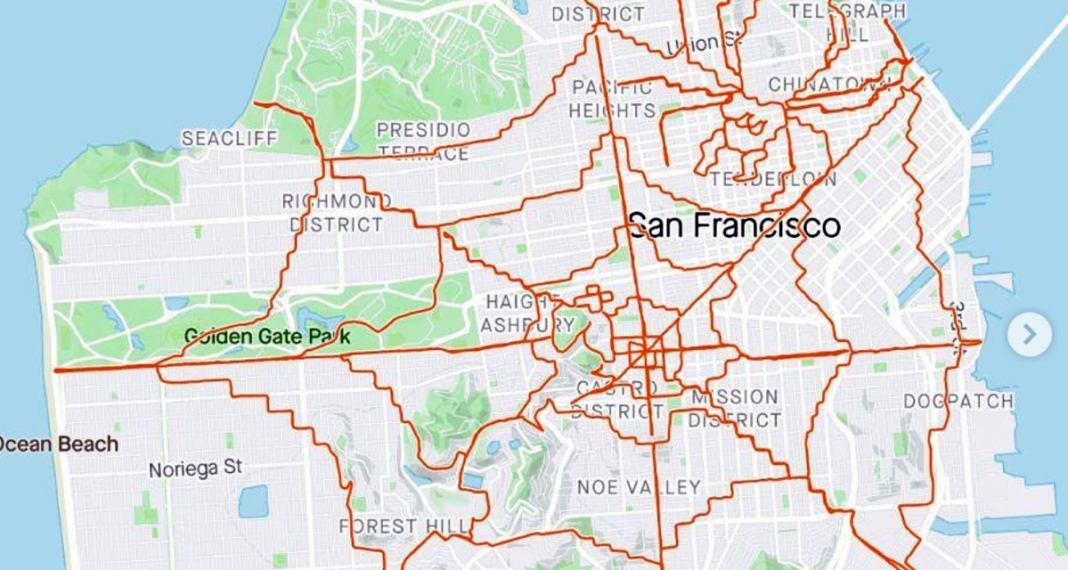 In 2019, a guy in San Francisco posted an enormous portrait he’d made of Frida Kahlo on Instagram.

His name was Lenny Maughan and he’d drawn the picture using the exercise tracking app Strava. In the two years since then, Maughan has continued to create giant pictures as part of his regular running regime. He doesn’t get paid for his work, and he doesn’t want to get paid. He just wants to draw stuff using the gridded streets of SF as his canvas. I’ve been following Lenny for a while on both Strava and Instagram for a while now, and when he recently drew a massive and fairly detailed flamingo, I thought, ‘Okay, I gotta talk to this dude.’ And so, I did. Meet Lenny Maughan, aka ‘The Human Etch-A-Sketch’. 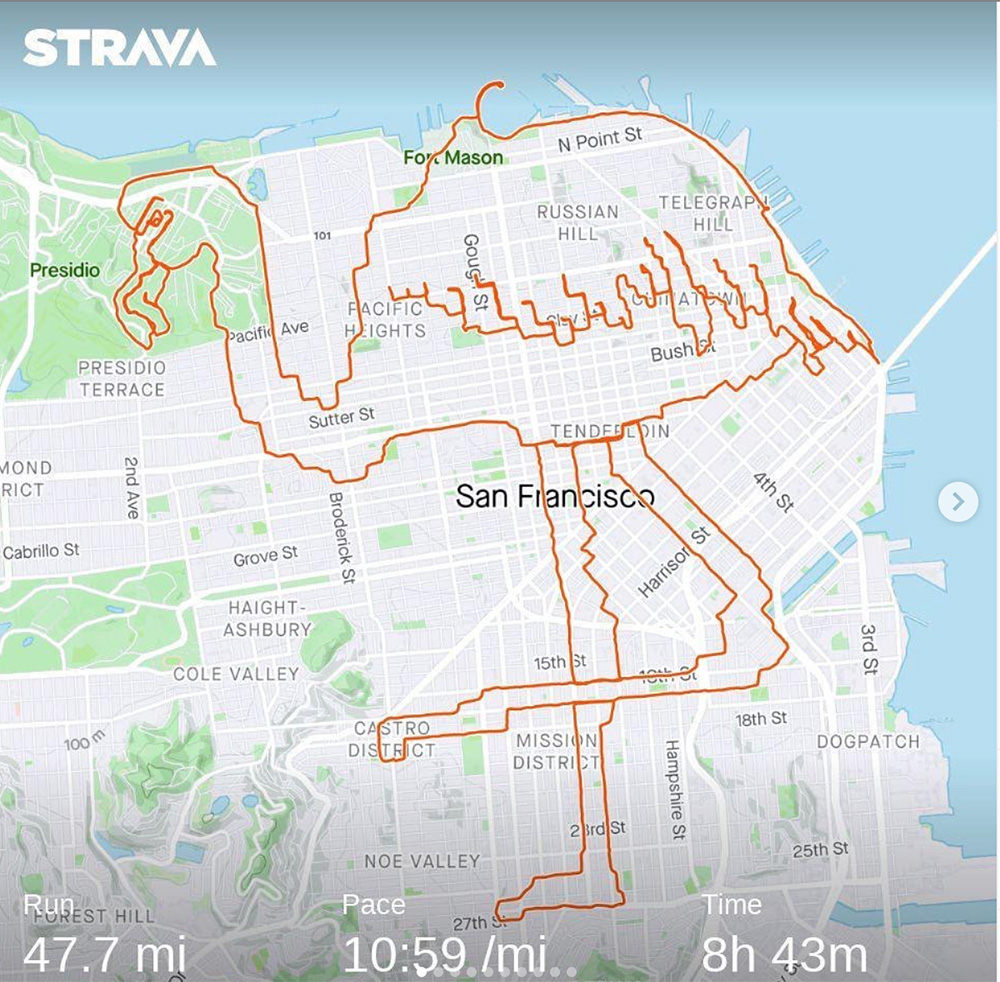 So, I’m calling from Australia, and in Australia, we measure distance in kilometres.

And I’m looking at your most recent drawing on Instagram, the flamingo, and it’s 47.7 miles and that’s over 76 kilometres.

Yeah, I guess it is. That one I did across two days, so two marathons in two days, but if you’re interested in numbers, check out the elevation. San Francisco’s a city of hills…

Yeah, so the elevation is quite extreme. But, you know, it’s not a race for me. I’m not concerned with speed or distance or elevation, I just want to make sure I go the same route that I planned and plotted out on the map.

So, what do you do, run part of it and then hit pause on Strava and come back the next day and keep drawing-slash-running?

Yeah, I run with the Strava app on my phone and if I have to stop to eat, drink, use the bathroom, or if I’m done for the day, I just hit pause.

How do you know when and where to make a right or left turn to draw the thing?

Well, I sketch it out on a map of the city and the I follow that very, very carefully. I don’t want to make a wrong turn or I’ll have to start all over. There’s no ‘undo’ function in Strava.

So, are you running along and looking at a map on your phone?

I used to draw it on a paper map with the streets marked with a highlighter, and I’d go through many different iterations until I get it just right.

You mean drawing the picture on the map?

Yeah. But then I lost access to a printer, so now I do it on my Kindle—I have an old Kindle that I use. I draw it out on photoshop. I have a big file of the San Francisco City map and I sketch it on photoshop and then download the finished map to my Kindle, and I pinch and zoom as I need to.

It’s the same concept as a highlighter on paper. 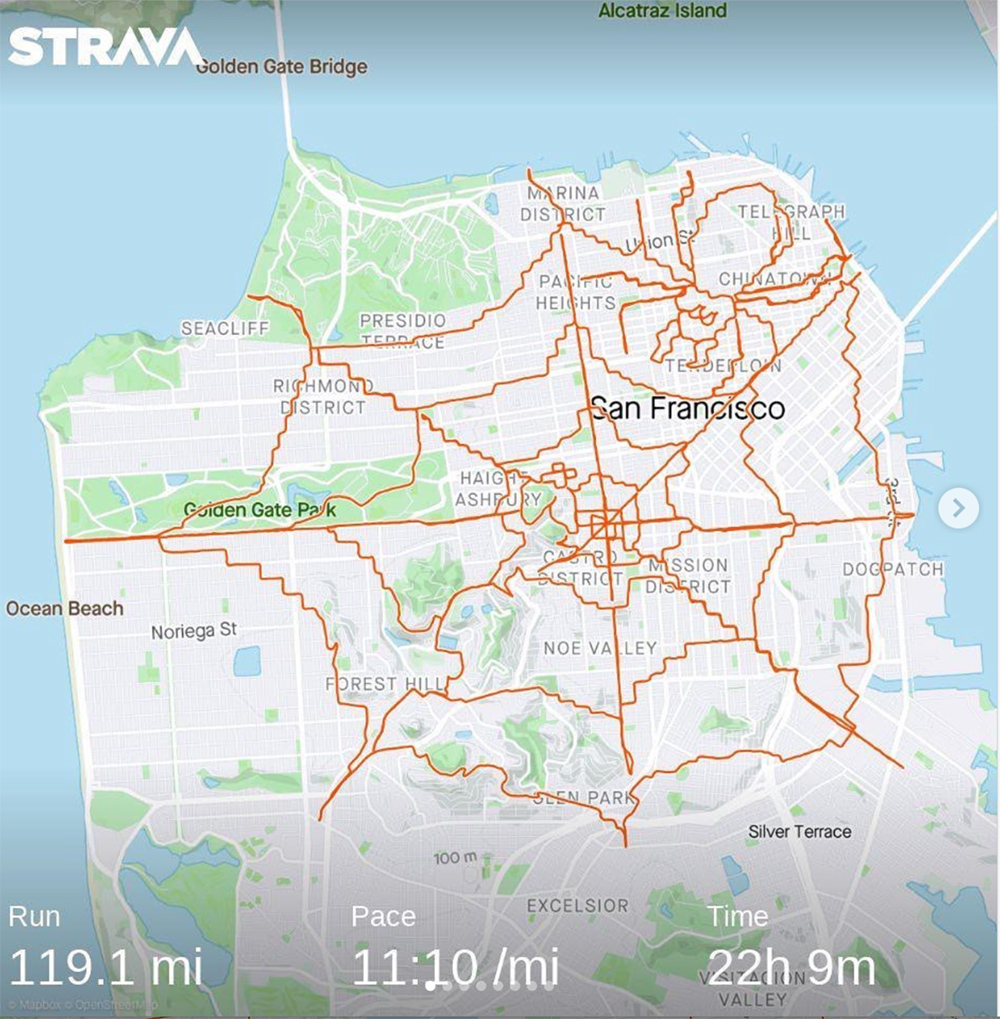 That one was the longest I’ve done, and I believe it took five days… Yeah, five consecutive days, Monday through Friday. And I was very, very anxious that the app wouldn’t crash while it was paused and I’d lose everything, but thankfully it worked. I talked to the people at Strava and they told me that you can pause indefinitely.

Yeah, they said you can pause and even turn off your phone and even close the app, and when you come back it’ll still be there. But I’ve never paused it and resumed any later than the next day.

That’s good for what you’re doing.

So, what do you do, hit pause and then go home, and then come back the next day and start at the same place you finished?

Yeah, and that actually adds more to my run.

You mean, you’ll pause the drawing…

Your work seems to be getting more and more elaborate and detailed. Do you have, like, a crazy big dream project in mind, like ‘The Last Supper’ or something?

No, I don’t really know what I’m going to do next. I’m on a streak to do one a month, and I find that I work best under pressure, so I’ll often be like, ‘Ok, I’ve got some free time on Thursday,’ and I’ll sit down on Wednesday night and say, ‘Think, Lenny! Think!’ And I’ll look at a map and sketch something…

To run the next day.

Right. So, I’ll spend hours doing that trying to get it right, and then I sleep on it—dream about it—and then I’ll run it the next morning. 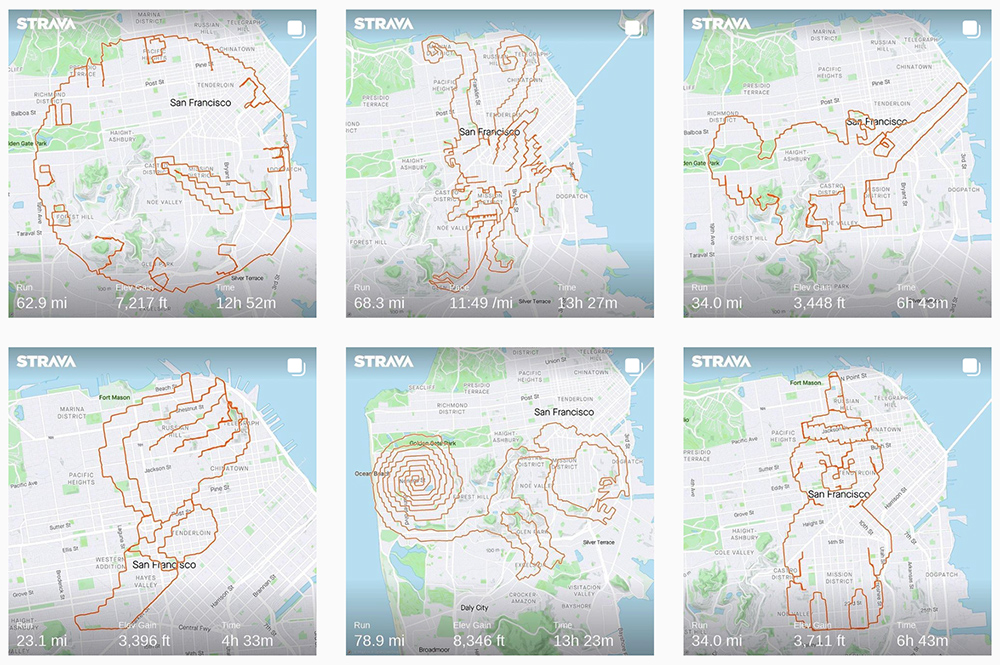 How long have you been running for?

And how did you get into it?

In high school, my gym coach—who was also the coach for the track team—singled me out, and he said, ‘Lenny, I want you to try out for the track team.’ He was quite persuasive, so I tried out and I ended up liking it. It turned out to be a good thing and I got hooked.

Are you sponsored or anything? Seems like Strava should be sponsoring you.

No, no. Strava wrote an article about me once and send me some swag, which was really nice of them, but I’m not seeking sponsorship. I don’t want to commercialize this. It’s my hobby, and for me it’s about the artistic challenge. I like coming up with my own ideas, I don’t take requests…

Wait, do people ask you to draw stuff for them?

Well, people will say, ‘Hey Lenny, you should draw, you know…’ It’s usually something in current events.

Oh, sitting with the mittens?

Yeah, do you remember that? It went viral. I thought about doing it, but then, you know, a year later no one is going to remember it, so I’d rather doing things that are instantly recognizable to everyone around the world. 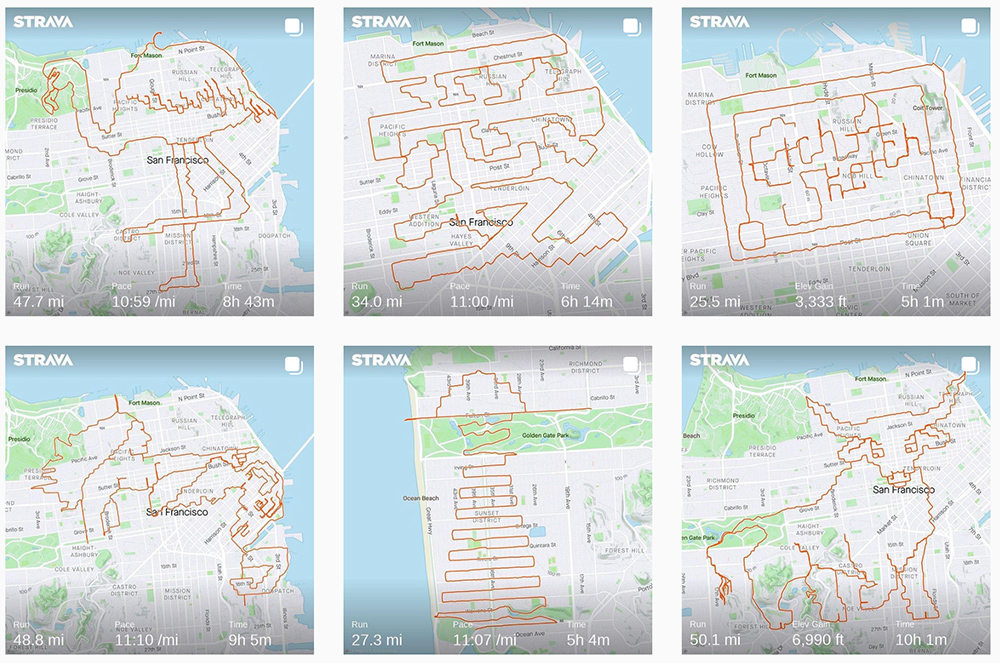 You must have some idea of what your next drawing is going to be. Can you tell me what you have in mind?

No, no. I can’t. If I told you it was going to be, I don’t know… a kangaroo or whatever, you’d say, ‘Oh, that’s pretty cool, maybe you could, like, put a little joey in its pouch.’ And then you would have influenced me to draw something.

Right, right. You know you should draw, though?

A kangaroo with a little joey in its pouch.

Maybe it could be holding the Australian flag.

Ok, Lenny, thanks for your time.