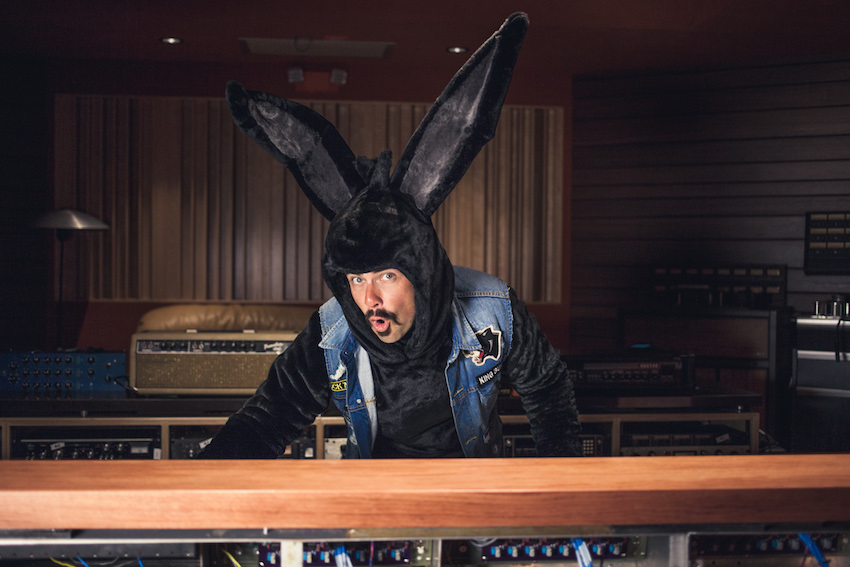 Andy Walkers’ new venture Bunny Racket, is all about moshing with the ankle-biters.

The sheer volume of media designed to entertain kids in 2016 is undownloadable. But, for all the apps, games, and gadgets that you can plug your kids into so that you don’t have to talk to them at the dinner table, there’s something missing. It’s music. We never really got much further than The Wiggles in the kids music sphere, and that just didn’t sit right with muso Andy Walker. So, he started Bunny Racket—a no-nonsense rock band whose frontman is a giant rabbit called King Bunny.

“It’s basically about getting kids involved in rock and roll, collaborating, art and loud guitars,” says Andy, who’s just got back to Australia from BR HQ, a studio in Joshua Tree in the States. Bunny Racket is Andy and former Kyuss drummer Brant Bjork, and their first album Rock and all Animals, is recently a wrap.

“It’s a project that I’ve been working on with Brant for a couple of years,” continues Andy, “and it came about as a result of us being lifelong rockers, and finding ourselves in the period of our lives where we—and a lot of our friends—now have families, and there’s now always kids around.” Talking to Andy, you can tell that his latest venture is something that he’s super excited about, and I can’t help but get the impression that it’s tied into a general excitement of being a new(ish) dad, and coming to the realisation of all the awesome new stuff he can revisit and introduce his “little dude” to. The idea of “shared experience” is paramount to the Bunny Racket ethos.

“Rock and roll’s still very much seen as an adult thing,” Andy explains. “The shared learning thing is what’s getting me excited the most, I think. Being able to really dig something, and then your kid seeing that you’re into it, and eventually conversing with them going, ‘Oh, these bands used to play when I was a kid, and this is why I used to like them etc…’ ”

Having listened to a few unreleased Bunny Racket tracks, it’s clear that the songs are going to be an awesome vehicle for parents to introduce kids to the bands they love; the influences are so clear in the Bunny Racket songs. And that’s completely deliberate on Andy and Brant’s part.

“It’s The Ramones, Kiss, The Misfits, ACDC, Sabbath, all that stuff, meets…The Cat in the Hat,” Andy states proudly.

As well as the album—which will be released in September purely on vinyl (a deliberate ploy on Andy’s part to tie in with Bunny Racket’s historical rock ideals), the Bunny Racket mob are also releasing a web series designed to compliment the album. For each track on the album (15) there’s a ten minute clip that explains where King Bunny was at the time of the track’s conception (both in place and headspace) and the other animals that were involved in the collaborative process of laying down the track.

“It’s teaching kids about rock and roll culture and collaborating with other artists,” explains Andy. “The history of rock and fun and games really. And it’s something that all of us bigger kids can get into as well. It’s pretty much the funnest project that I’ve ever done in my life. And I get to ask all of these amazing musicians if they want to be a part of it, whether that’s being in the live show, or the web series, or recording.”

One of the biggest coups of Bunny Racket, is that the man laying down the lead guitar licks on the album is none other than Robby Krieger from The Doors. One can’t help but wonder how difficult conveying the idea of a band fronted by a giant bunny rabbit to established musicians is, but Andy says that Robby was into the concept from the start.

“Robby’s 70 and his kid Waylon is like, 45,” laughs Andy. “So he’s well past the little kid stage. But he’s so into bringing music to children and getting kids to learn from their parents and their parents’ friends rather than the TV screen. And he’s a big advocate of getting music back into school curriculums in the States, as it’s been taken out almost completely. Most schools in America don’t teach music, and he’s put together a programme to get music back. Music’s the ultimate way to learn if you’re into it. Keeps the brain active.”

From the personal experience of growing up in a vaguely conservative environment, I know that the moral panic associated with Rock ’n’ Roll—sex, drugs, throwing TVs out of windows—is still a factor that prevents some parents from introducing

their kids to the good stuff too early. I ask Andy if Bunny Racket was a conscious decision to steer the Rock ’n’ Roll narrative away from this sentiment.

“That was never the intention,” he replies. “Clearly we’re not going to teach our kids about the deep, dark recesses of rock and roll, and some of the places that we’ve all been. But, all the good stuff, all the important stuff that makes sense, is where we’re coming from. And if you’re a rocker yourself, y’know, it’s not all about getting loose. It’s about feeling empowered through music and feeling that other people are into what you’re into. You’re not alone, there’s this cool thing happening. If that’s something that you can turn kids onto early, then that’s great.”

Splendour in the Grass will be the first live outing for Bunny Racket, and Andy’s rounded up the Australian muso mafia to help. Hamish Rosser from The Vines and Wolfmother is on the skins, Dean Sutherland from Skunkhour on bass, and Dave Jackson from the New High (aka Jack Rabbitson) on guitar. A bunch of really established musicians dressed as giant bunnies playing loud Rock ’n’ Roll about Jaguars and how a chicken is not a fruit, sounds like the epitome of a wacky good time to me, and you get the feeling that Andy shares this sentiment.

Bunny Racket will be starting his Kickstarter on Sept 1st, keep your ears pricked.