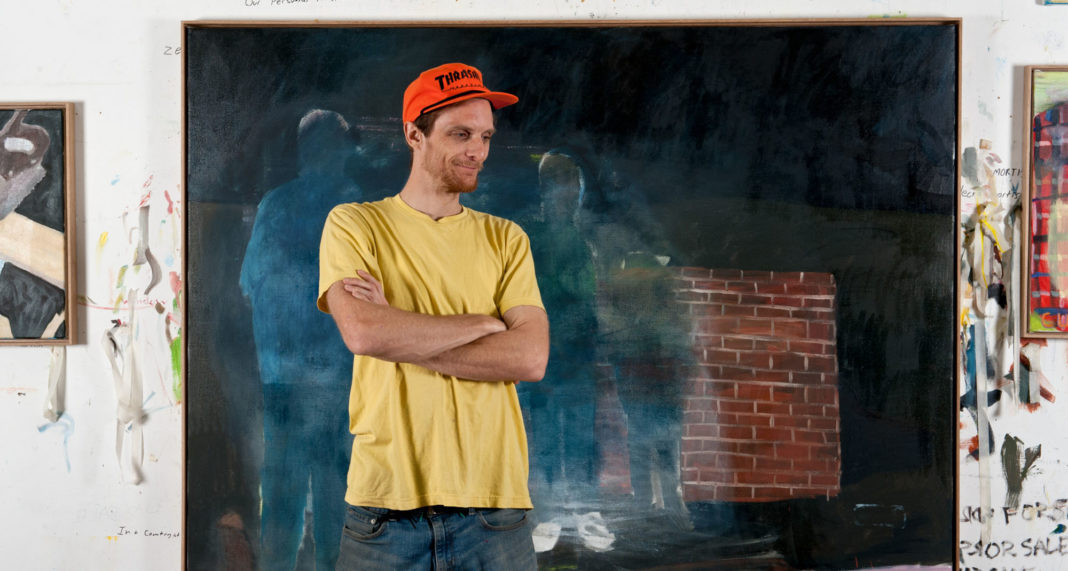 Nick Collerson is a Sydney based painter whose work I hope you will get to know.

He’s one of those rare artistic satellites who swings happily in his own ever-changing orbit, producing wryly humorous and enigmatic paintings that reference daily life in their reach to probe the nature of the universe. I caught up with Nick for a chat about his latest exhibition at the Liverpool Street Gallery, Interior Decorating by Roy Batty.

What’s one of your earliest memories of painting?

Santa Cruz Art Center, independent community thing. I was in the painting class and we were doing self-portraits. I was just painting a self-portrait (laughs) with, like, acrylics on canvas-board. When I look at it now, it’s pretty good. It’s just a headshot, like head and shoulders with a blue jumper, and I invented the background; it had waves crashing, but they were very abstract. Like the ocean or something crashing behind me. 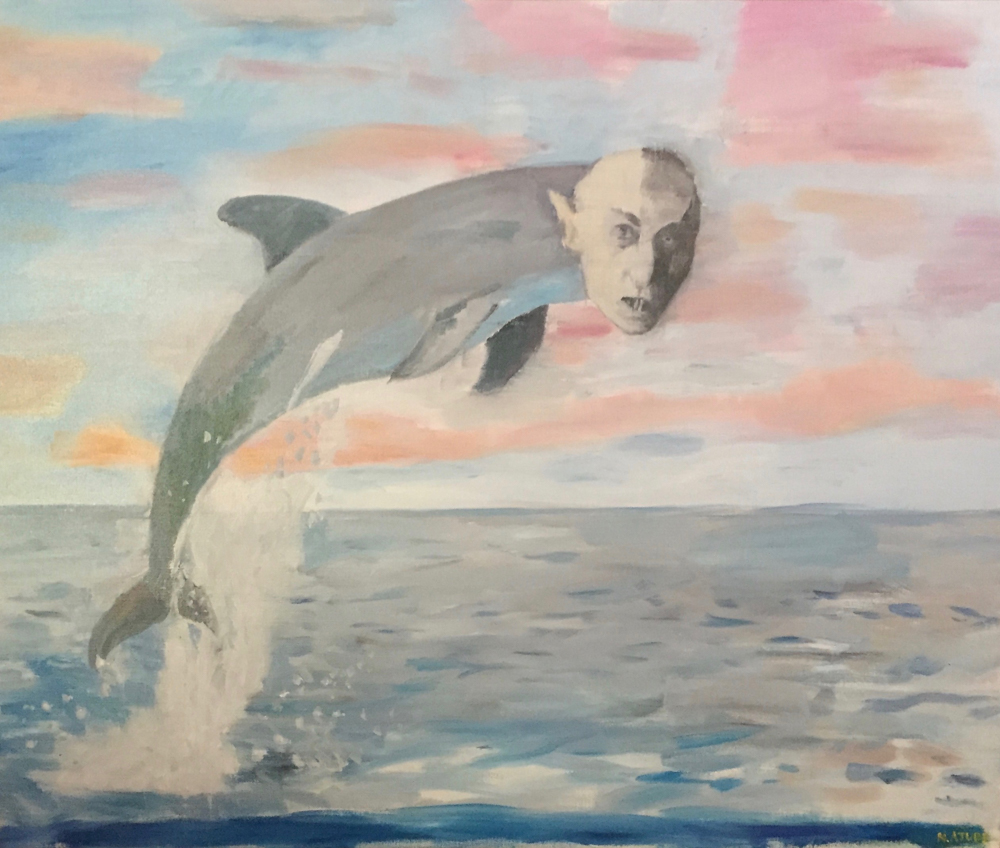 How old were you when you were a California kid?

That would have been at around age nine or ten… I wasn’t born in California. I moved there at some stage.

How does a kid who grew up in Santa Cruz, California–and who skated Derby Park–end up with a bona fide Australian accent?

(Laughs) It’s funny, some people pick up on certain words I say, but I’ve got like a mutt accent. I roll my R’s. I mean, just living here, you know, you pick up the sound. But then again, I meet people here, and they’re like, ‘You’ve got some sort of accent.’ Maybe because I put on an accent. Everyone (in Australia) kinda puts on the accent, like, jokingly, when you’re a teen or younger. Everyone is pretending to be Australian even though they are Australian. Playing with the accent taught me to speak it. 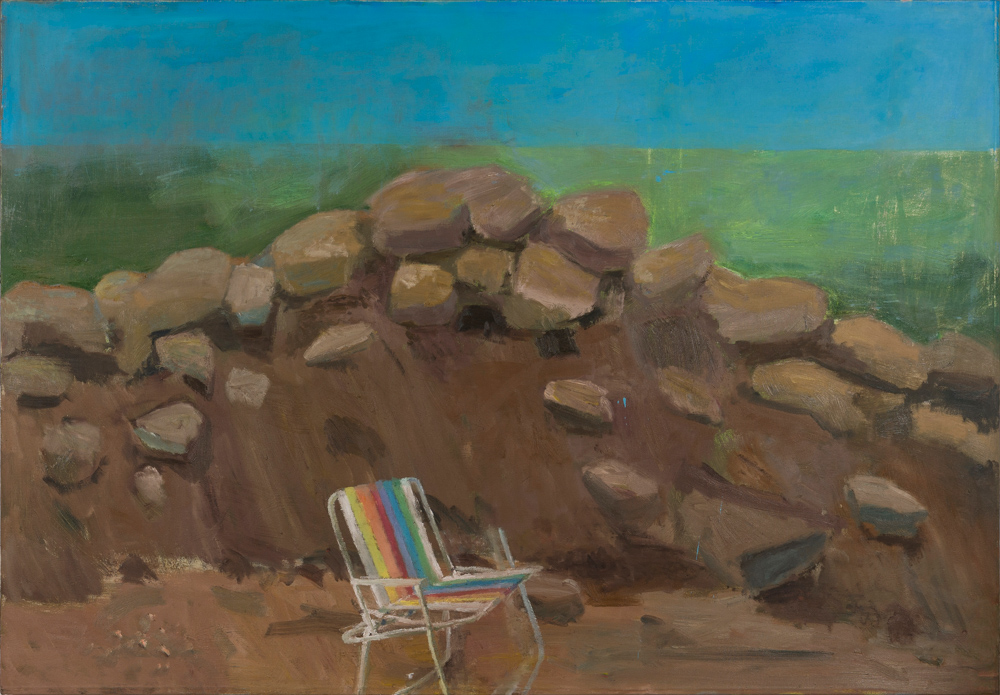 Do you remember where you were when you learned switch tre-flips?

Yeah, I remember where I was. I was skating and living in Brisbane, in a suburb called Indooroopilly, which is an indigenous name which means ‘Valley of the Leeches’ or something like that (laughs). I was just skating under my house. There was a car park and I was just really into the tricks. I’d been skating through the 80s, but it was in the early 90s that I learned them.

Do you remember what year that was?

It would have been 1993 or 1994. I was aware of tricks and switch being a thing, and I was just nerding out and learning as much as I could; so, I learned switch 360 flips. I think I learned nollie ones first because you have a bit of leverage with the nollie, and then I learned switch ones as well. 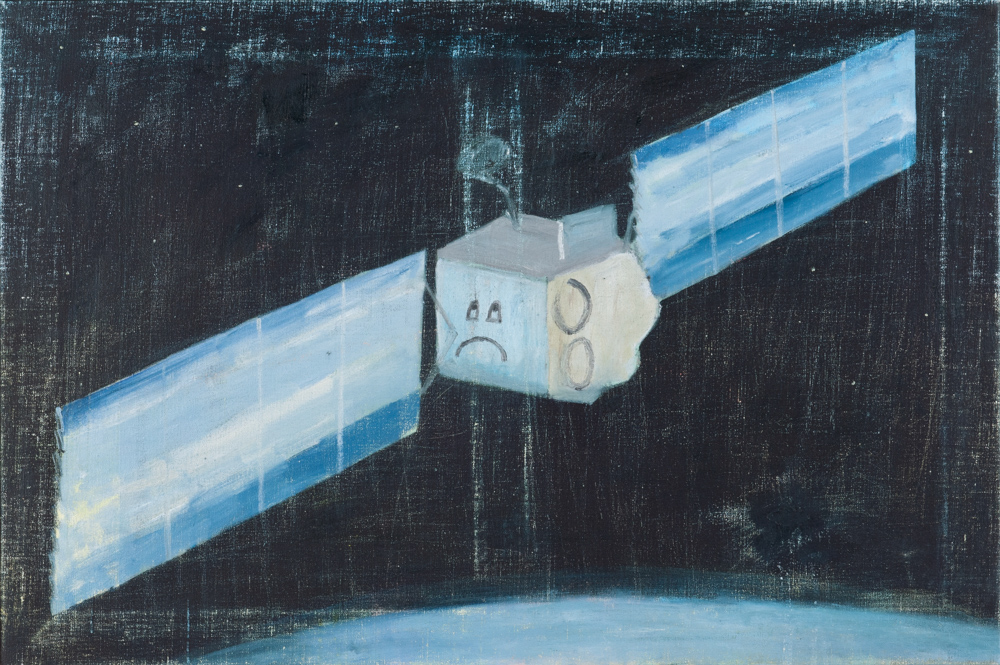 Nice. Who are a couple of living painters that you’ve been looking at and thinking about lately?

There’s a painter from Belgium named Walter Swennen. He was a poet for a long time and turned to painting. He’s just got a really fascinating play of imagery and paint and materials that I find refreshing. Also, Maria Lassnig. I think she’s Austrian. She died fairly recently, like in 2014. She’s an interesting sort of imaginative painter. I’m inclined to go with people whose work becomes a translation–and a very imaginative kind of translation–of the world. Maria Lassnig is someone who has really amazing formal qualities in her painting, in terms of her colour and the way she constructs them, but she’s equally at ease with observation and has sort of a loose handling of paint or abstraction or whatever. She’s intriguing.

I find Enrique Martínez Celaya–who is a contemporary painter living in LA–has a fascinating engagement with painting. These painters I’m mentioning, it’s not that I’m finding tropes to copy, it’s more that they have a compelling idiosyncratic take on painting, they’re usually painters who aren’t aligned with any particular school. Those are the ones I’m attracted to the most. René Magritte is also a big one, although I agree with Philip Gusto’s appraisal of Magritte: ‘Magritte’s fine to a point with me, but I don’t think I could enjoy that forever.’ I really enjoy Philip Guston too, there’s beauty in the sheer construction of the paint. 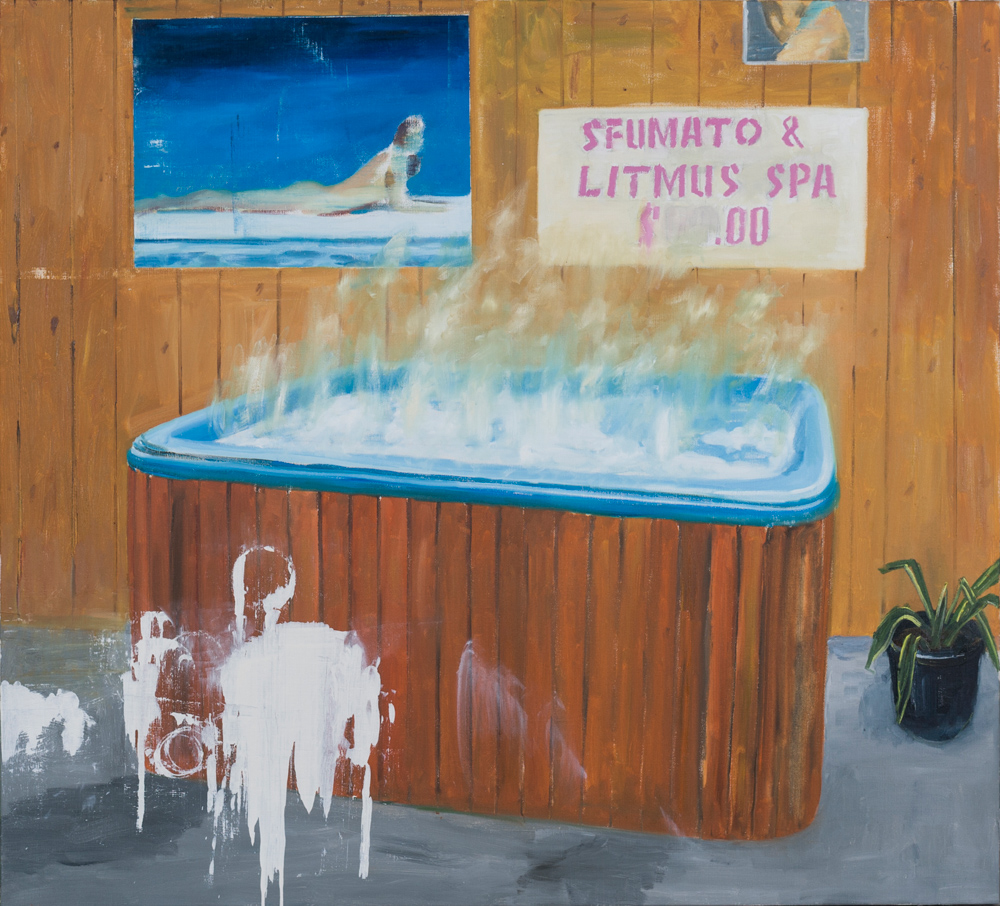 Is that important for you, though, for the final painting to be something that hits you instantly, but that you can also relish and look at it for a long time?

Yeah, I like using beauty to draw people in. I like for paintings to have a beautiful aesthetic, not for their own sake, but almost like a trap (laughs). A device… It’s like with a flower: you have it at home for a few days and it decays; the true message of the flower isn’t the beauty, it’s kind of an absence of. I like that… I like my paintings to be beautiful like a flower, but then there’s something in there that kind of unfolds, if that makes sense. Some parts of your work are painted from direct observation and other times you reference photos, but all the while you’re working improvisationally.

How do you square these different modes, and is there a kind of painting that you particularly enjoy? What’s it like to employ different modes within a painting?

There’s a general answer and a specific answer. I’ll go with the general first. I like what Luc Tuymans said about contemporary painting: ‘You’ve just got a bigger toolbox now.’ It includes photography or Photoshop or any means to play with or adjust images. The way I think about painting is maybe a little different than the schools that have been set up in the last 120-odd years, the modernist schools. I use the word abstraction to describe images. For me, abstractions are images; I’m looking at it formally as an abstraction, but also as a strange presentation of reality. A strange little picture on a screen or printed out photo or an ink-printed bit of advertising, they all have this abstract quality in terms of them being an idea rather than reality; they represent an idealised reality. My perception of reality is perhaps a little different too. You know you can observe the image or you can observe the process of flux. I can see both. I can see the process of perception, which is a river and fluid in time, or I can see the apprehension of abstract little crystallised moments. So, I’ll use both. 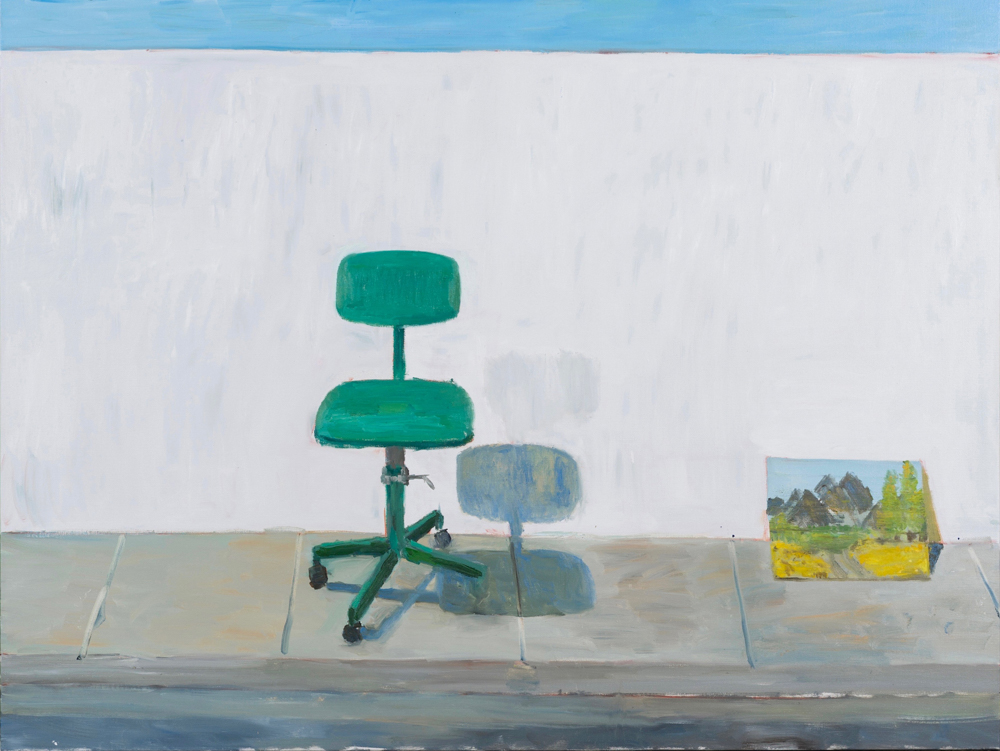 I’ve heard you use the phrase ‘surface tension’ to describe a quality a canvas has once it has paint on it. What do you mean by this?

It’s the way paint forms a membrane on the surface, giving the eye some traction on the image, and providing unity to the surface where the eye can move around; and it doesn’t stop anywhere. It’s like an energy, a dancing sort of energy on the surface. I think that’s what I mean. (laughs) In a painting that has surface tension, the viewer might not be aware of it–they’re just enjoying the painting. But for someone like me, who’s sort of behind The Wizard of Oz curtain (laughs), I try to be aware of how the paint sits, how thick the paint is.

The painting in front of me now, this wall, a sidewalk and a road (which I seem to be doing), I painted it in one go and the ground seemed a bit thin, there was this transparency to the paint, it didn’t hold; I could kind of see through it. Which may be something useful, but in this particular painting I wanted a surface for the eye to travel across and feel that solidity, y’know? 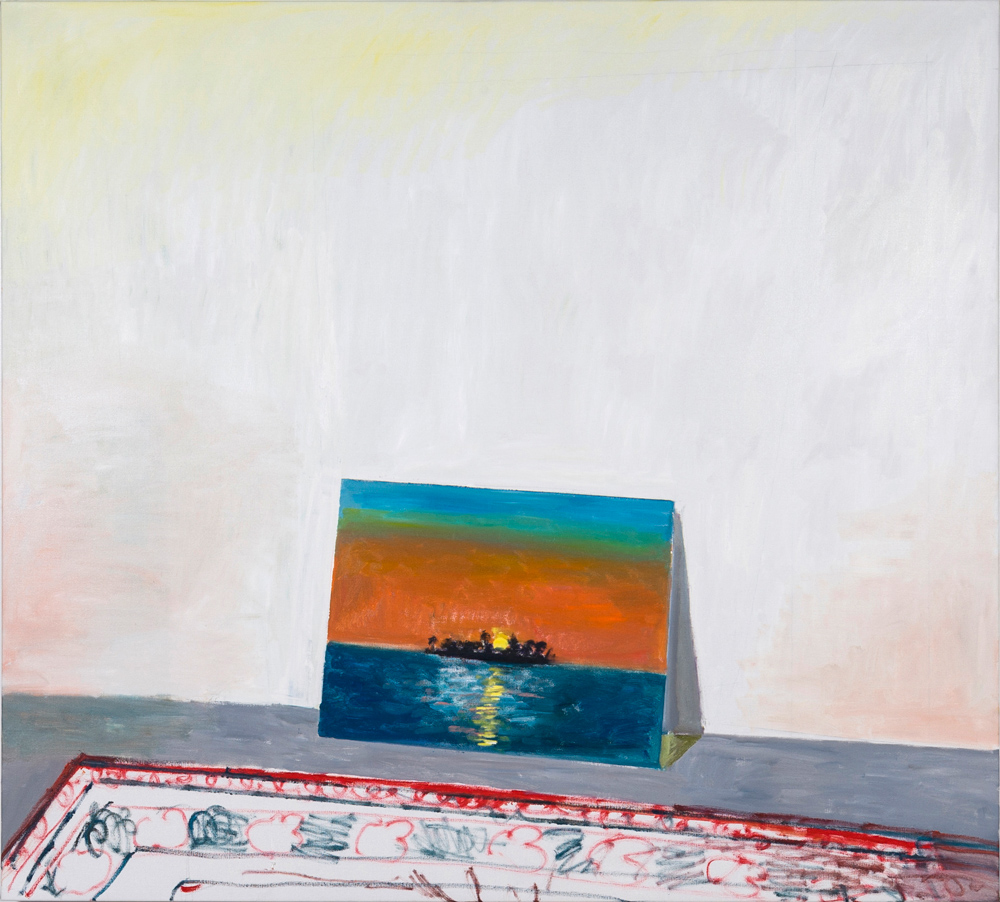 Yeah, I get that sense that you’re just kind of whirring away, your arms are moving paint, night by night in the studio. In a lot of your paintings, it’s evident you’ve worked over that surface several times, and the subject of that canvas might have manifested and changed a couple of times. How often do you work over a final painting that’s in a show, like, on average how many times has that been re-written?

It really depends. Some paintings happen pretty quickly. They come out and they sit and they work. Other paintings, I’ll paint over and obliterate. There’s no hard and fast rule. It’s not a stylistic thing, it’s just what’s required of the painting. It could be like… there’s a painting in the Clayton Utz show that was begun in 2009, and I just sort of finished it this year. Part of it was wanting to not waste the materials. A good canvas can be reused, and also I like the way that an old painting can contribute to the new painting even though it might not be visible, little bits of it come through and it contributes in some way.

Yeah, you seem really comfortable with scraping away; editing is just part of the process. Your paintings are these wonderful abstract compositions that happen to include things and objects and ideas, but you’re really a colourist playing with colour. Do you have a colour theory?

If there’s a colour theory or an idea about how I use colour, it would be that colour is the main vehicle in painting. You’ve got shape and then you’ve got colour. It’s really just those things, using those as best I can to make the paintings work on that level outside of any other concern or thing I’m thinking about. When I finish it up, I’d like it to operate very well on that level, y’know? Just as a visual statement, a visual proposition. 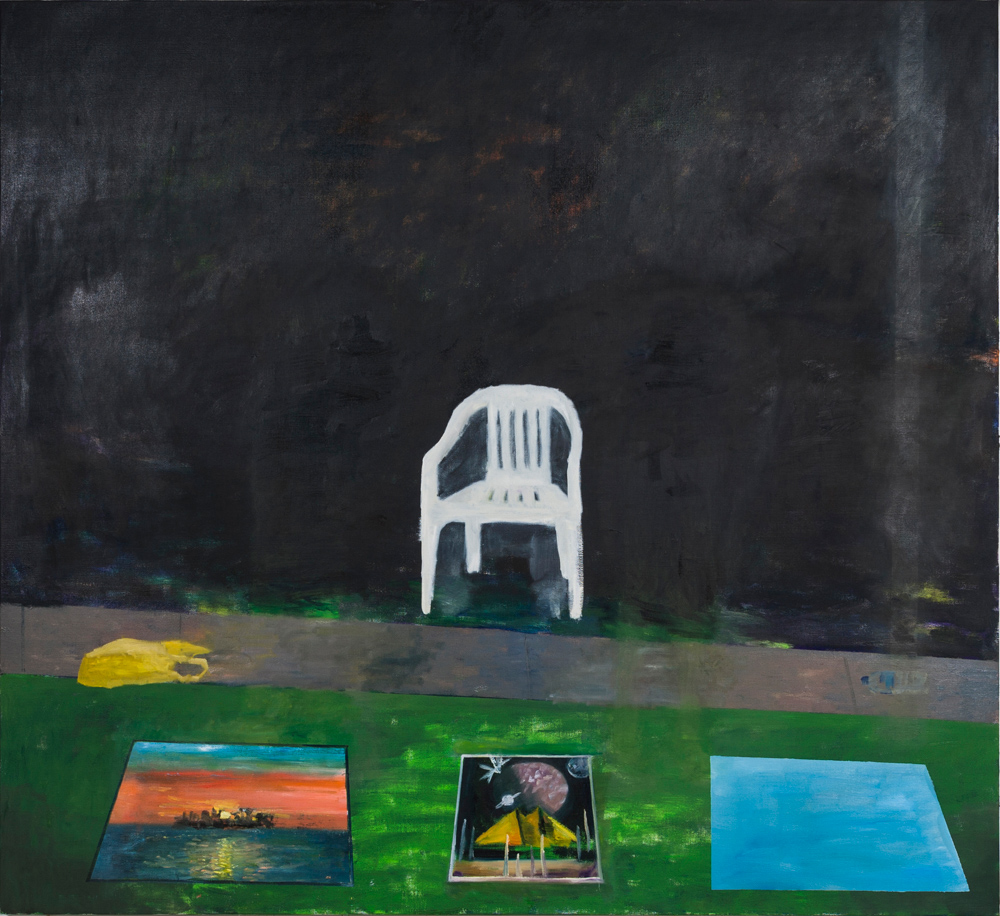 Cool. Do you have any advice for someone who’s younger and interested in painting and being an artist?

Yeah, there’s a couple bits of advice I’d have for them. Let’s assume this person is good at drawing, or they enjoy drawing and have some facility with it. I would encourage them to not rely on the skill of their hand or the skill of making illusion, but encourage them to look into the history of painting. And not just in the 80’s or their favourite artists but take a look at Velázquez, take a look at how painting has been regarded throughout time. Painting is a very old discipline. You can find very fascinating things that have been said about painting–even in Ancient Greece.

And I think it’s important to consider not just what you do, but why you do it. Not just how you make an image, but ‘what is an image?’ Maybe this is terribly philosophical, but, at the end of the day, don’t just rely on making illusions and being happy as an artist who is merely skilled. Try to go beyond skill and find something that is rightly regarded as art.

See more from Nick over on his Instagram @nickcollerson then go pick up a copy of his work in the 2018 MC Annual here. 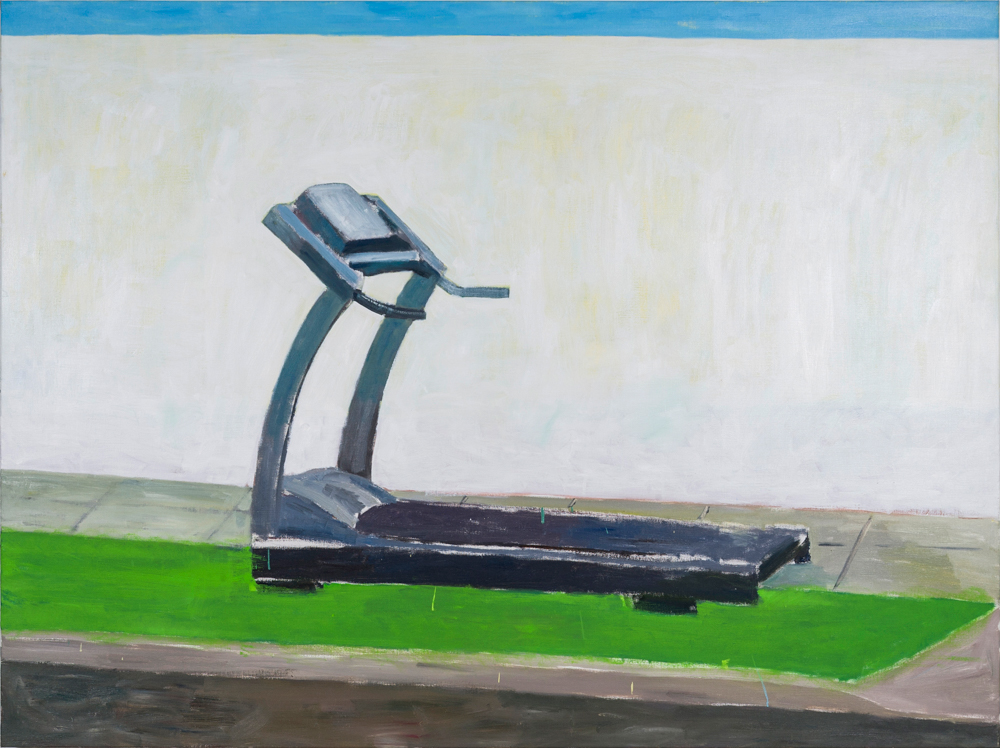