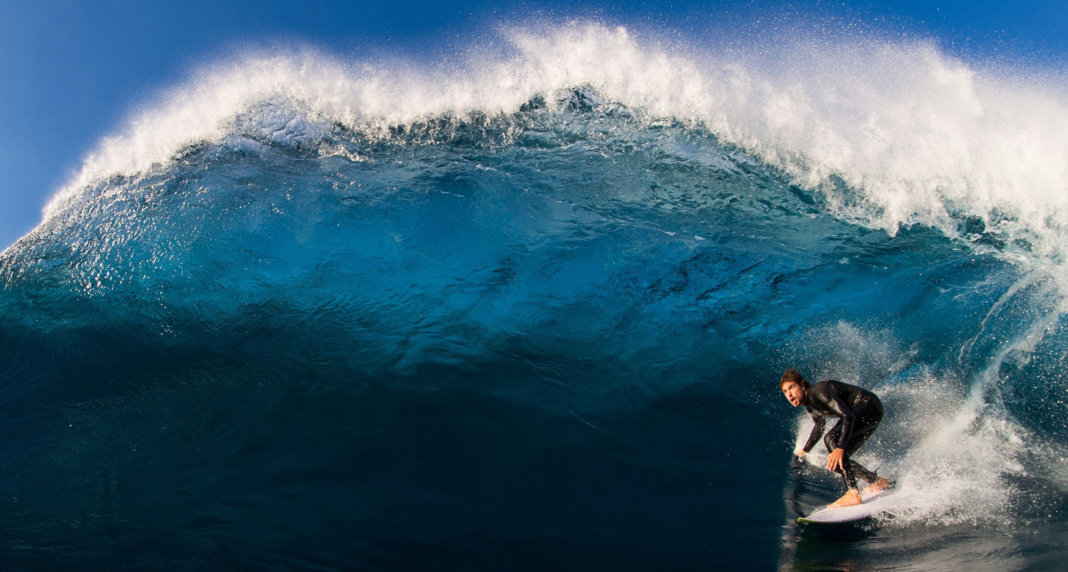 Do you like surfing? Enjoy chasing the waves and finding the tube? Perhaps you enjoy a drink? Draining the tap and crushing the tin? Maybe you like both.

Maybe you like both so much you wish you could do both at the same time. Maybe you tried doing both and it didn’t go down so well. If you answered yes to any of these questions (chances are you did), then its best you let the surfing be on the beer, rather than the beer on the surfing. Got no idea what I’m talking about (chances are you don’t)? Then let the slab-savvy, cold-water connoisseur and FREE-Brewing Co. collab’-er Brett Burcher break it down for you below.

Brett! How’s it going, man?
Jamie, I’m good mate. How are you?
Yeah, good thanks, dude. What are you doing?
Just got home from work, cruising.
What’d you do for work?
I’m a primary school teacher, Milton Primary. It’s a full-time gig at the moment, but it’s a bit of a year by year thing.
Gotcha, have you had that throughout the whole pandemic period?
Yeah, yeah, so not too much has changed in that sense. The school shut down for a couple of weeks, so you had to work from home. I got to sneak in the odd surf during the day which was good though (laughs). 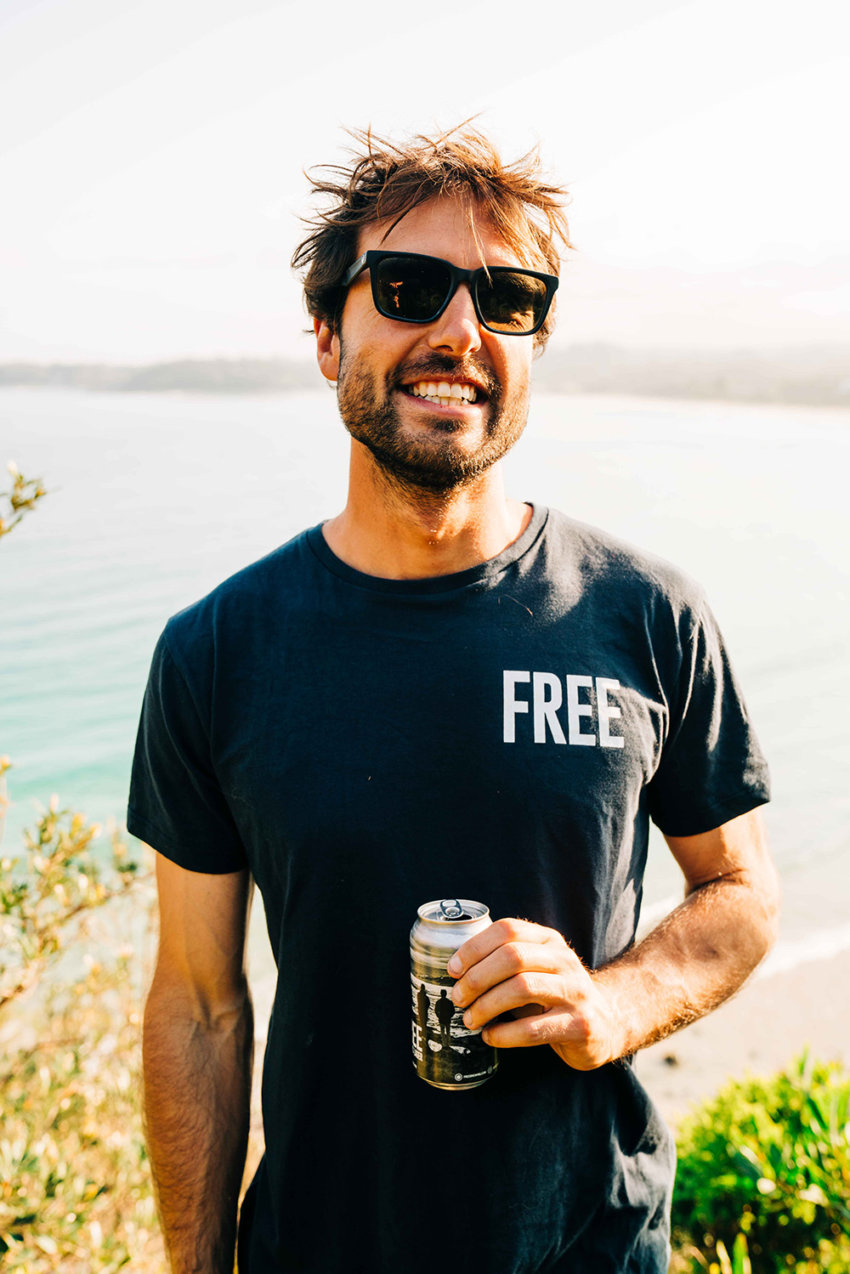 What’s the vibe been like down there during this whole time?
Without sounding too ignorant, it’s actually been really nice. Life for us didn’t change too much, but it feels like people have had a bit of a readjustment and slowed down and appreciated the little things a lot more. How about in Sydney?
Yeah, man, to be honest, its been pretty much business as usual up here, at least for the non-affected industries and occupations. Obviously no mass gatherings or anything like that, but yeah no crazy lockdown or anything either. Definitely a bit of a slower pace though. So you’re working with Free Brewing Co, what’s the go behind it all? How’d it all start?
Free Brewing Co approached me a while back and wanted to collaborate on something, and given the current climate and the recent state of affairs; the bush fires, small businesses closing down, travel being cut off, etc. Free Brewing Co wanted to do a special limited-edition series of cans which were location-based within Aus, and reflect this concept of community and sense of place.
Gotcha, and what was the theory behind the locations?
The locations we chose are 4 spots which I felt like I had a special relationship with, and not meaning just in a waves-sense either, more of just the entire location as a whole, communities which felt like a home away from home. I’d been chatting with them throughout the whole bush fire period and Free Brewing Co. were always keen to try help out in whatever way they could which was cool, and then afterwards we kept speaking and came up with this concept. It’s also a bit of an homage to all the amazing parts of Australia and acts as an initiative for people to go and explore domestic travel. 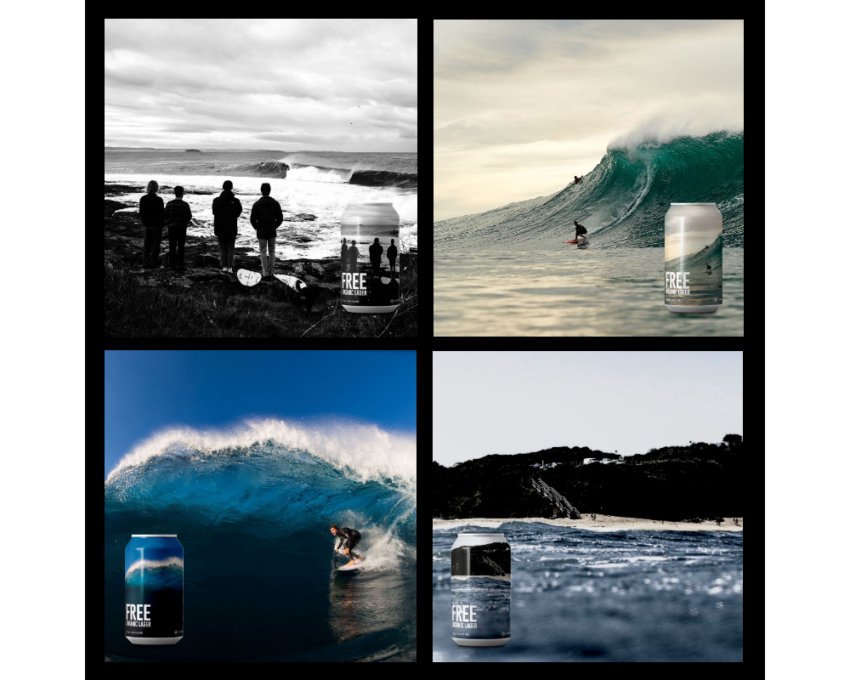 Rad. And these locations are…?
Mollymook (NSW), Shippies (Shipsterns Bluff, TAS), Margs (Margaret River, WA), and Bells Beach (VIC). Some pretty iconic zones. Mollymook golf club especially.
How’d you get photos for each spot to run in the cans? Did you have to go out and shoot on-location or?
So, that was a pretty key part to the concept too, we really wanted to make sure each photo wasn’t just some random picturesque shot from google images. Free Brewing Co. collaborated with specific photographers from each spot which had a special tie to the area and reflected that in their imagery. For example, the Bells shot was one of Jarrah Lynch and was shot from the back of the wave facing the famous steps there. The Margaret River one was shot by Russel Ord whose lived in Margs forever, the Shipsterns one was by Stu Gibson whose lived in Tassie his whole life, and then Mollymook local filmer/photographer Max Zappas and I went and shot together. 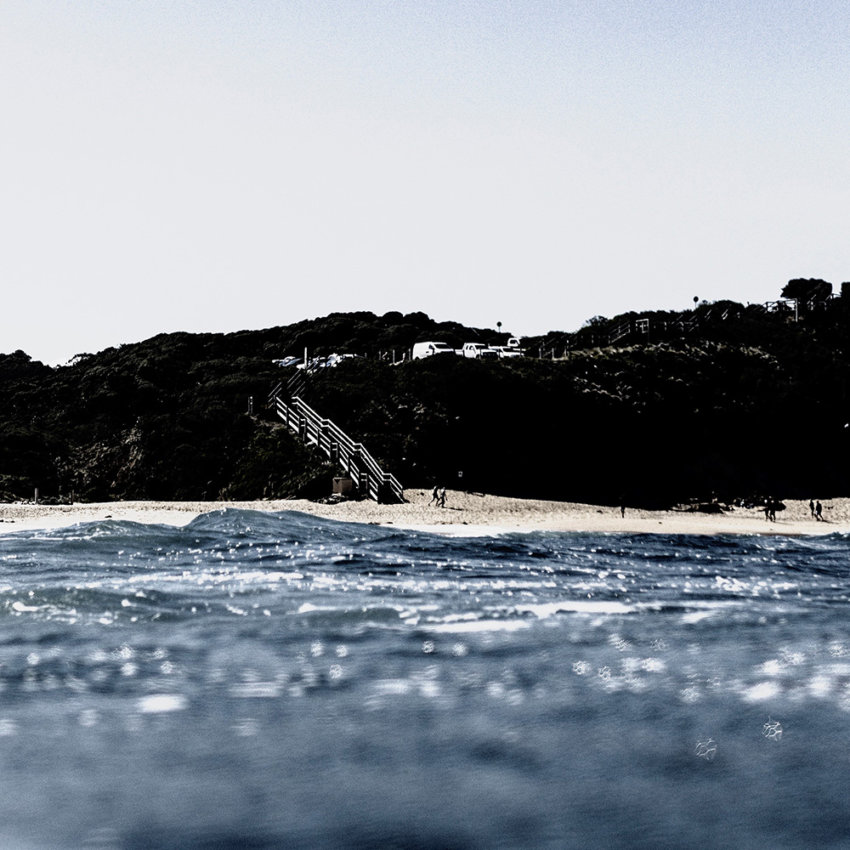 Sick! That’s interesting Free Brewing Co. went to that level of detail and engaged members of the local community, it’s always nice knowing the backstory of things I think, that is when there even is a backstory.
Yeah, for sure. I think that was maybe the first time this sort of thing has been done too, the whole photograph-wrapped-around-a-can concept. 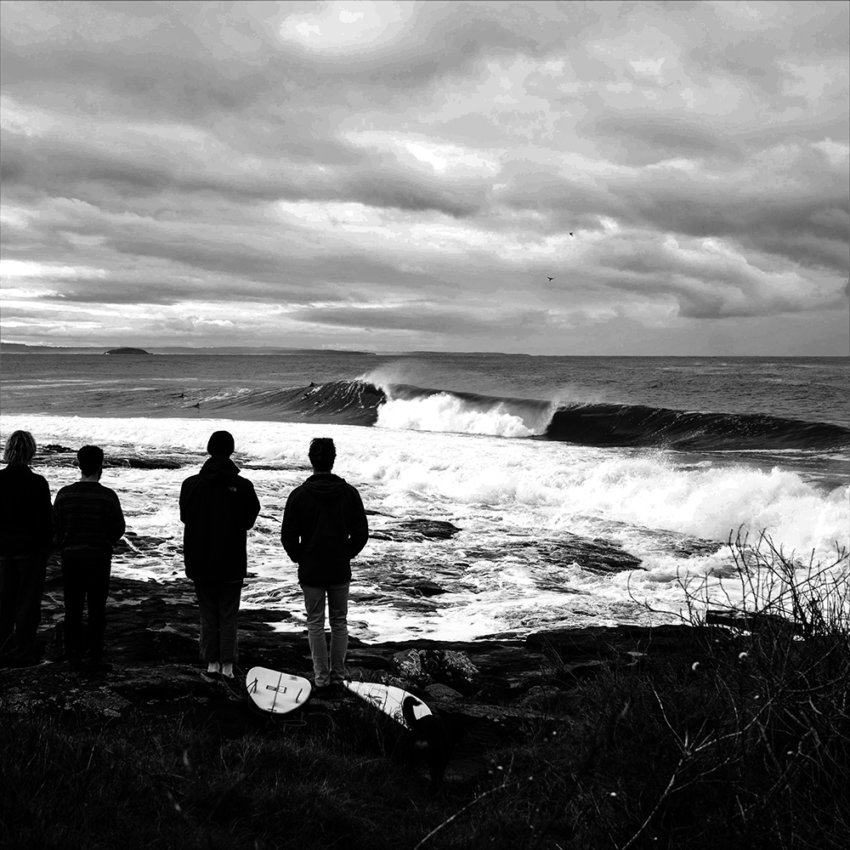 Yeah, I wonder if there was any issues with that, seems like it could warp pretty easy from the wrap.
Yep, I think Free Brewing Co. actually said it was pretty hard (laughs). They pulled it off though.
So the photographs have direct connections with the locations, what about you? Why’d you pick those spots?
Mollymook is a no-brainer, I just love a place that has soul and is raw and has its own character, but is also semi-progressive in the sense that it keeps up with what’s going on and isn’t completely remote. Margarets is similar in that sense too, and feels like it shares a lot of similar values; there’s a lot of open coastline to explore and both have a community that cares about each other and looks out for one another. Shippies mostly because it’s my favourite wave (laughs), but also, again, it’s such a beautiful area and it’s a whole entire experience in itself, from the walk to get there, to surfing it, it’s all such a rewarding challenge. And then Bells was just because it’s such a historical part of Australia for surfing; it’s got such a rich history, as well as also being similar to Shippies and Margs in the sense that it’s such a rugged coastline and raw environment.
Do you ever go anywhere warm and tropical? Maybe with some pina coladas too?
(laughs) Not really. I’m more of a winter guy. You?
I like winter too, Indonesia is pretty nice though.
(laughs) Yeah, it’s not bad. I’d rather take Ireland though. 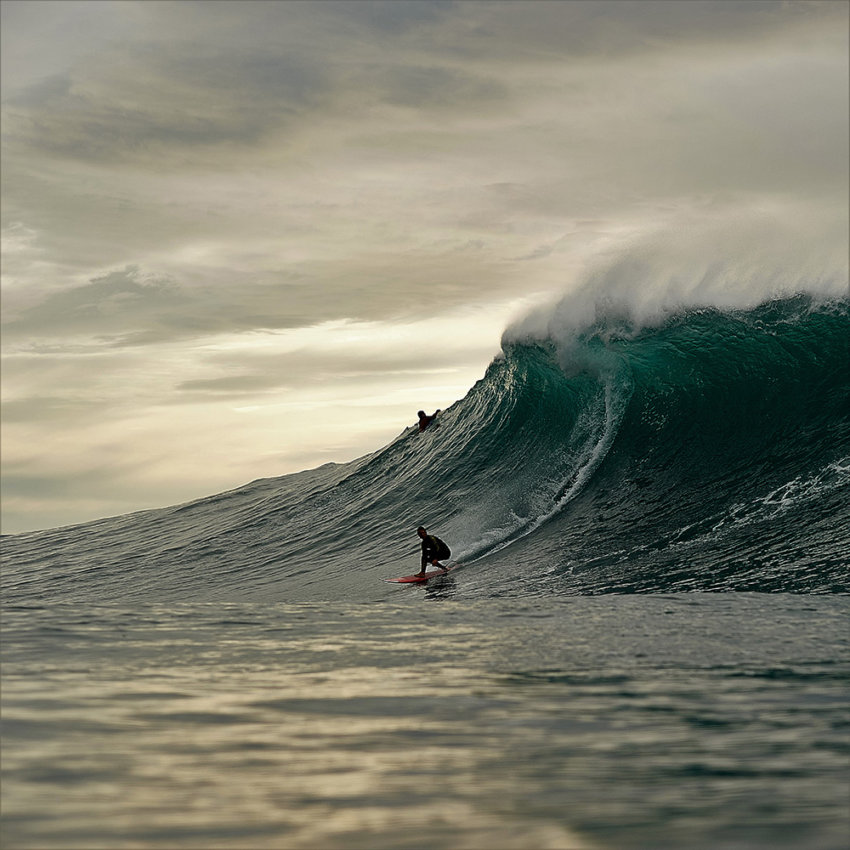 Different folks, different strokes. Well, thanks for the rundown on the concept, time for the real-talk: what’s it actually taste like? Are they four different beers?
Dude, they taste good! And nah, they’re all the same, one beer—4 designs. It’s just a nice easy-going lager. It’s organic though too, which is cool.
Organic beer! I’ve heard of wines but not beer, what’s the go there?
I think it just means there’s no artificial preservatives or anything like that and is just made from natural ingredients.
Nice. I’m intrigued. You cop some cases?
I think they’re all at Max’s (Zappas) place, so he’s probably already drunk them all (laughs).
I should probably let you go then, so you can grab some before they’re gone. Anything else you want to add?
Ah not really, I just think it’s cool that FREE Brewing Co. is an independent, Australian company who are really putting initiatives towards engaging with communities, and they care about creating original concepts and collaborations. It seems like new businesses are beginning with more of a conscience, which is nice to see and something to support.
Totally. It’s definitely up to the consumer to support shit that matters too and get behind things like this if they are to make any impact.
Yeah, exactly. I mean, any beer that aligns with my values and tastes good—I’m all for it. 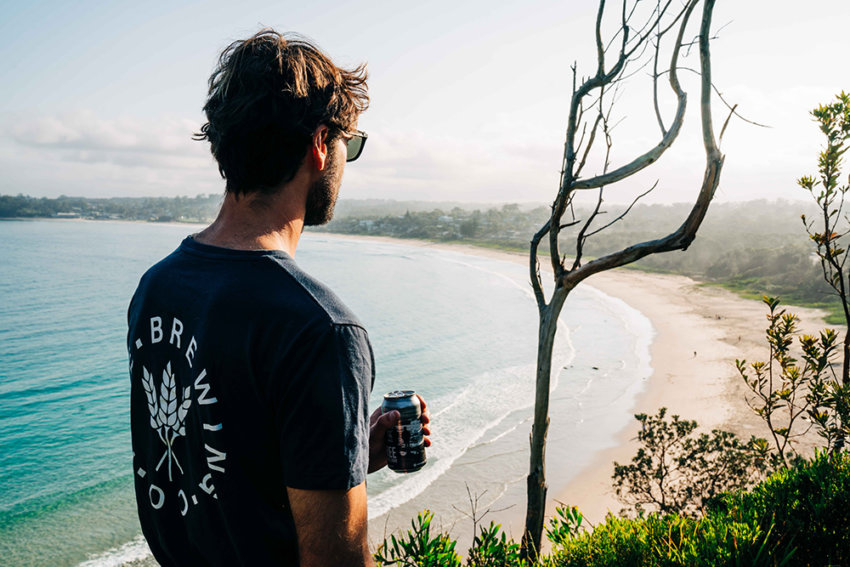 One last question: where do I get one of these things?
BWS and Dan Murphys should have them, head on in. Also, Free Brewing Co. are jumping onto that 1%  for the planet sales initiative for the environment too.
Okay, I think that wraps it up with a perfect little bow. Thanks, Brett.
No worries, thank you. 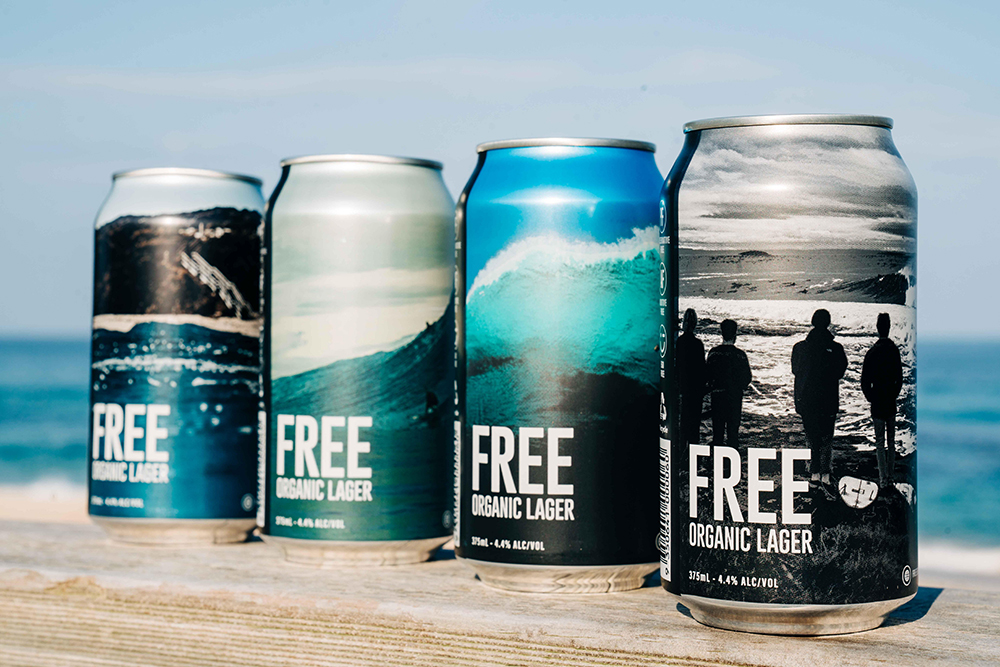