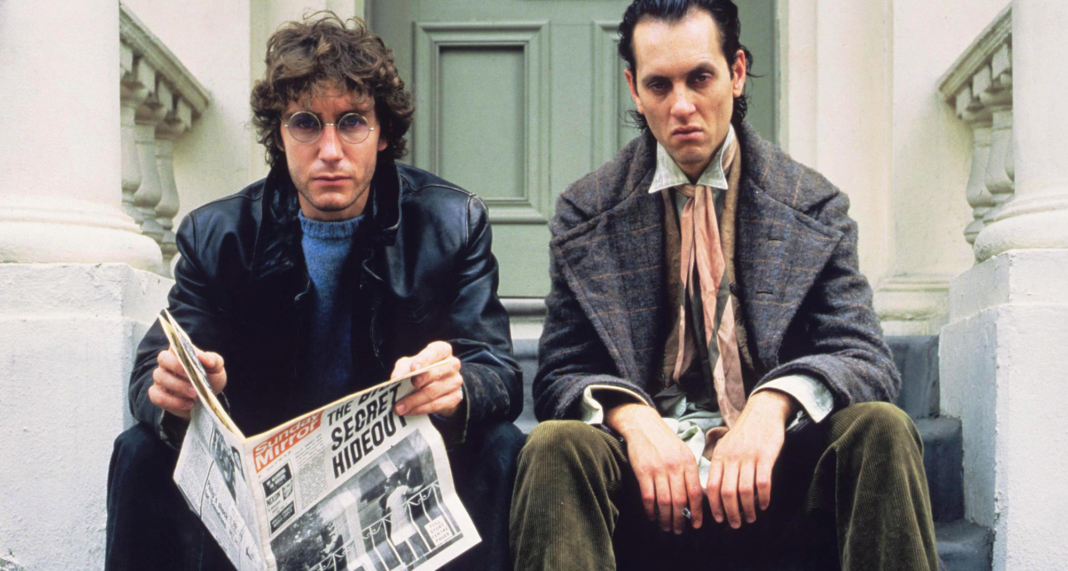 Settling in on the couch with the idiot box and a glass of plonk is a pastime as old as time itself.

And with the lockdown in Sydney leaving us little more to do each night than just that, I thought I might suggest some boozy viewing to make you feel a bit better about your life because at least you’re drinking less than the people in these shows are. Maybe. I also included drinks you might pair with each film or show because why not? Chin-chin!

A black comedy cult classic, the film that launched Richard E. Grant’s phenomenal career, and financed in part by George from the Beatles, Withnail & I is the story of two out of work actors living in a squalid apartment in Camden. ‘Fed up with damp, cold, piles of washing-up, mad drug dealers and psychotic Irishmen’ the pair convince Withnail’s wealthy uncle Monty (RIP Richard Griffiths, ‘Uncle Vernon’ from Harry Potter) to let them holiday at his cottage in the English countryside for a weekend, and, naturally, chaos ensues. They’re boozed up the whole film, although Withnail would tell you he’s ‘only had a few ales.’ Ironically, Grant is allergic to alcohol. Poor guy. Amazing ‘drunk’.

Pair with the finest wines available to humanity, or if you can’t manage that, some room temperature lager.

Edie: ‘You’ve given up drinking before.’

I think that pretty much sums it up. Two chic lunatics who never seem to actually do any work but have an endless supply of champagne and labels in their wardrobes, and constantly reassure everyone around them that they’re not that drunk. The scene where Edie falls out of a car is a masterclass in physical comedy. I aspire to one day own a champagne fridge, but since I probably won’t even own a house, that seems like wishful thinking. Incisive dark humour is what the Brits are best at, and Joanna Lumley and Jennifer Saunders as Patsy and Edina deliver every line with absolute* drunken conviction.

Pair with Stoli Bolli: ice-cold Stolichnaya vodka topped up with Bollinger champagne. If you don’t have the ingredients, a bottle of Chanel no. 5 will do in a pinch.

I nearly left this one out because it feels so obvious, but then that’s why it deserves to be on the list. Sideways is now 17 years old (fuck), and stars Sandra Oh and some other people. It’s an American buddy comedy, ‘one last fling,’ pre-wedding boy’s trip tale that takes place at a winery. Miles (Paul Giamatti)’s nasal wine commentary is irritating and accurate, Jack (Thomas Haden Church) just wants to get laid and Stephanie (Sandra Oh) breaks Jack’s nose with a motorcycle helmet. As with all American rom-coms, it all gets wrapped up with a nice bow by the credits, but it’s a bittersweet ending which is a nice departure from the usual saccharine bullshit.

Pair it with anything but merlot, even if that means you have to chug the communal spit bucket.

Oh, Hank Moody. The king of the red flags and the love of my life. Californication follows down-and-out author Hank Moody—played by David Duchovny—as he wreaks havoc across LA in a black, beat-up 1990 Porche 964 Cabriolet, burning every bridge, drinking every drink, doing all the drugs, and hurting everyone he loves and then some—all while being the epitome of the loveable rogue. And no matter what he does, I forgive him. I’m in therapy, it’s okay. If you ever want to feel better about your terrible life decisions, a couple of episodes of this show will make you feel like you’ve got it all sorted and actually, everything is fine.

Watch this with a whisky and a beer. Add a cigarette, in the pool, with a hangover, for top tier catharsis, muthaaafuckkkaaaa.

Another Round is listed as a comedy, but bear in mind it’s Scandinavian and they have a completely cooked sense of humour. Four friends decide to test psychiatrist Finn Skarderud’s theory that having a blood alcohol level of 0.05* makes you more creative and relaxed (this is a real theory). At first, it seems like a heaps good idea. Life is fun! So they crank it up to 0.10, then start to binging like teenagers, then the shit hits the fan, etc. Honestly, I could watch Mads Mikkelsen read the dictionary, but this movie is good. Fun fact: the actors did actually imbibe onset, but only enough to get a bit of a buzz on (reportedly).

Pair with a Sazerac and maybe some tissues.

*To have and maintain a BAC of 0.05 you need to have two standard drinks in the first hour and one every hour after that (which is the legal limit in Australia).

A show about dysfunctional duo Bernard and Manny who ‘work’ and live in a bookstore with their completely bonkers friend, Fran. This is another excellent example of the Brits making a show about people who are completely terrible but we accept without question. Bernard (Dylan Moran) is a filth wizard. He smokes constantly, doesn’t get up before 10, drinks wine at all hours, and can’t do his taxes. He’s a real everyman. His friends hate him, he hates everyone—it’s a huge 2021 mood. If you only watch one episode, make it ‘The Grapes of Wrath’. Plot: while housesitting, Bernard and Manny (Bill Bailey) accidentally drink a wine valued at 7,000£ and kill the pope.

Drink your most unbelievably rare and expensive wine, because wine is just for enjoyment, and pair it with a delicious coaster.

The Flight Attendant is a show I enjoyed way more than I thought I would. It stars Kaley Cuoco as ‘Cassie Bowden’, a good flight attendant/useless adult who happens to be a raging alcoholic. She wakes up covered in blood next to a very hot but very dead man, and her best friend Annie (Zosia Mamet, aka ‘Shoshanna’ from Girls)—a high-strung lawyer who I’ll bet is a Capricorn— try to work out what the heck happened. A fever dream and exactly what anxiety feels like, watching this when you wish to distract yourself from the people having fun, outside, overseas on Instagram.

Pair it with mini-sized spirits that you’ve hidden in your handbag, drunk straight from the bottle.