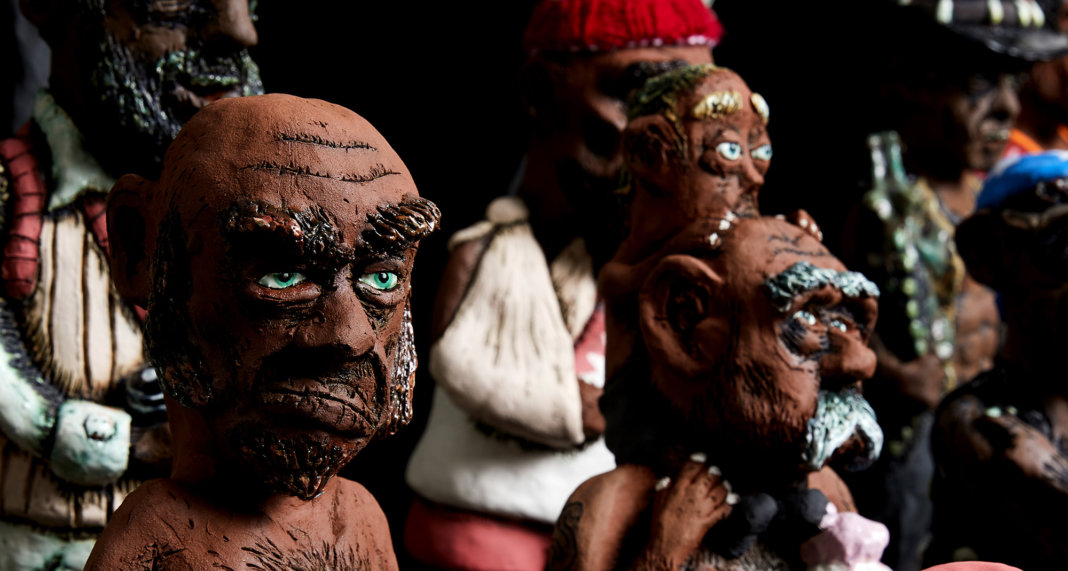 Ever since he could pick up a crayon, it was clear that Billy Bain was a gifted artist.

That’s not something I’ve gleaned from an artist bio or a gallery statement either—I’ve seen it firsthand. At our tiny primary school in Sydney’s Northern Beaches, Billy was the pride of the art department (coincidentally consisting solely of my mum, the school’s art teacher) from a young age. With a copy of MAD Magazine usually close at hand, his cartoonish yet incredibly mature drawings hinted at an artist in the making, and if that didn’t work out, well, there was always surfing (as the offspring of pro surfer Rob Bain, he’s predictably inherited his talents in the water too).

In the years since, Billy’s more than found his voice; helped along by a move to the big smoke from small-town Avalon for a degree in Fine Arts, but perhaps more importantly, a quest to find out more about with his traditional Indigenous culture from his mum’s side of the family. These motivations would eventually lead to his interest in cultural identity and Australian masculinity in Blokes, a series of clay sculptures exhibited at M Contemporary that dissect, but also poke fun at, the male stereotypes found at beaches and bowling clubs across Australia. Billy’s humorous observations of modern-day Australia, along with his proficiency as a skilled artist in a multiple of mediums, has seen him selling entire series of artworks before the gallery doors have even opened, and it’s about time we called him up to get his thoughts on it all.

One of my most vivid memories of you from school was—and correct me if I’m wrong—you were a perfectionist when it came to your art, even at a young age. You’d get the shits real bad if you messed something up. Do you still have that perfectionist streak?

Honestly, I think that mindset is probably what drove me to get to where I’m at now. There’s this kind of funny perception that artists aren’t competitive, which is true in the sense that everyone is on such different trips that it’s difficult to compare progress against someone else. But I still think to be a great artist you have to have that almost extreme level of self-determination, sometimes to the point where it’s a bit manic. I’m super competitive and I think that can cause me to be pretty critical of my own artistic output.  I think as far as perfectionism, I’ve found that making mistakes is part of learning. Especially with ceramics, it’s about learning the limitations of the material you’re working with. Often a happy accident is where I learn how far I can push something and that’ll help me with my next pieces. I try not to get shitty anymore but sometimes that is hard. I care too much.

Another memory I have is that you mentioned you were Indigenous from your mum’s side, but you didn’t seem to know much past that. Do you remember there being a specific point in time where you decided it was time to dig a little deeper?

I can’t really remember specifically when I found out I was Indigenous. I think I’d known I was Indigenous through most of my teens but hadn’t a clue what exactly that meant to me. I didn’t grow up around Indigenous culture, it wasn’t passed down through generations. I grew up on the Northern Beaches where it’s extremely white and basically devoid of any sort of Indigenous presence. If you told people you were Indigenous you’d often get harassed with questions regarding your blood quantum percentages, always being made to feel like you aren’t Indigenous enough. I think this is a real problem for a lot of urban-based Indigenous people. You’ve gotta understand that colonial powers did a real good job of conducting a genocide of our people.

It wasn’t until I was in my early twenties and I went to art school where I really started to understand my identity as an Indigenous man. I connected with a lot of other Indigenous students and artists and this is where I found my culture. It wasn’t this traditional idea of Indigenous culture and stories. It was very contemporary and very honest. People were making art that reflected, dismantled and challenged a lot of the colonial attitudes and systems that I’d been subjected to when I was younger and I was drawn to this style of artmaking. Making art has become a means of me deconstructing a lot of my own personal challenges and telling those stories about my identity in a way that feels right for me. I feel that it’s my responsibility to share our family’s story through my art. It makes me proud to still be a part of the survival and continuation of our culture.

What was one of the most interesting things you were able to find out about your roots?

We are of the Dharug people, who frequented much of what is now known as Western Sydney. I am a descendant of Yarramundi, a clansman and chief of the Boorooberongal clan which occupied the Windsor and Richmond Areas on the upper Hawkesbury River. Yarramundi’s children Colebee and Maria Locke are two prominent figures in early colonial and Indigenous relations and assimilation history. Because of this, I’m able to trace my lineage back to Maria as there are, luckily, some records available. Seeing my family tree and learning what I could about them really sparked my curiosity in my Indigenous identity. 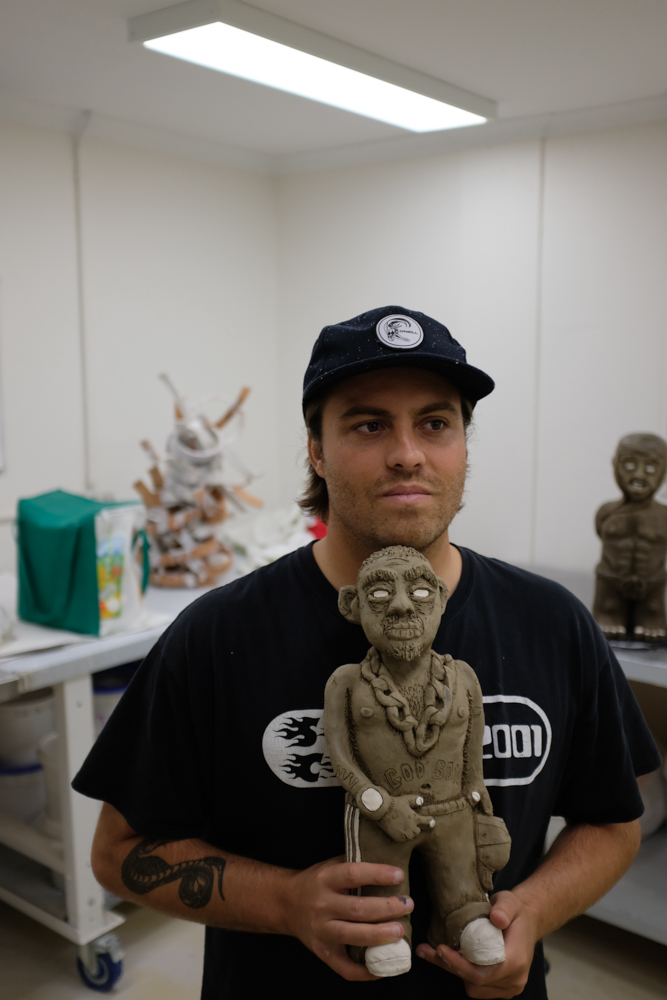 So your connection to country comes from mum’s side of the family, but I think it’s also fair to say your artistic talent comes largely from her too. What’s one of the most important things you’ve learnt from her over the years in terms of approaching your art?

Mum has always been super inspiring to me because she’s always working on something. Even if it’s just a tiny little exercise, she’s constantly making art. I think that work ethic is something I’d love to emulate in my practice. To constantly be making. She also really encouraged me to try lots of different mediums when I was younger which I think helped me generate a style that I can work across different disciplines. She’s always been in my corner and supports me to do what I love.

Your art, in particular Blokes, explores a lot of serious themes like masculinity, ownership of public space and identity. But it’s also really witty and pokes fun about these stereotypes that exist. Are there any artists who make art in this realm you’re influenced by?

Lately I’ve been really inspired by artists like Tony Albert and Abdul Abdullah. Their work is exceptionally loaded but also accessible. I think it’s important to make work that is endearing and seductive but also packs a punch when it comes to the message it’s aiming to deliver. These guys do that bloody well and are extremely important voices in contemporary Australia.

What was one of your favourite characters in the Blokes series?

It’s a toss-up between ‘Ice Cream’ and the ‘Bali Tourist’. I like the Bali tourist because it kinda borders on being really naff with the pink sunburnt skin and thick gold chain. I enjoy that I can make something like that and put it in a commercial gallery space.

You dabble in painting, printmaking and in recent years, sculpture—seems like you can work with pretty much anything. Is there any medium that gives you a headache?

I think they all give me headaches at certain times, but painting probably comes the least naturally to me. I think maybe because I’m juggling so many different things it can be hard to really devote as much energy as I’d like to painting, which probably demands a full-time practise to really master. But I enjoy painting. It just adds another dimension to the whole body of work and I think it’s nice to couple with the sculptures. I basically just make whatever I feel is going to communicate the idea best, so it’s necessary to have more than one way to go about that.

Last year was arguably your biggest yet as an artist, showing Blokes and your bird series at M Contemporary. What are you working on next?

I’ve got a solo show coming up in early 2022 with Manly Art Gallery & Museum that I’m really excited for. I was born in Manly and it’s my first solo show where I grew up, so it’ll be a lot of fun. Hopefully I can ruffle a few feathers.