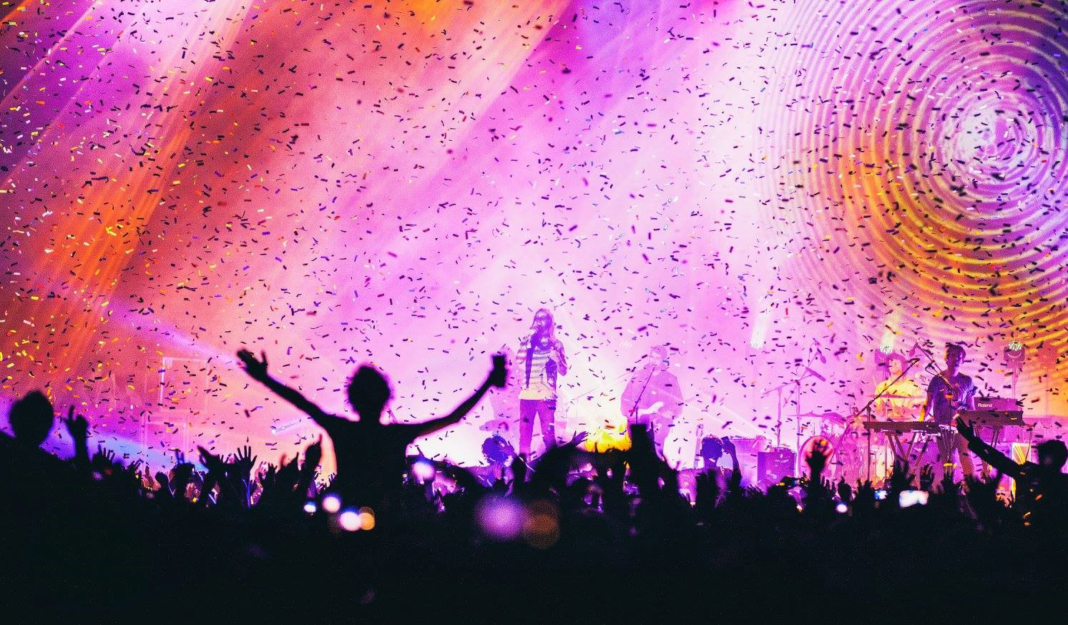 Live music is back, baby, so it’s time to get vaxed, waxed and max out your credit card with tix to these 18-month-in-the-making tours and festivals.

They had one of the best albums of 2020, Mordechai, but alas, no way to play it live—until now. Two weeks ago, the Houston based band announced they’ll finally hit the road this fall, kicking off with a performance at Omaha’s MAHA festival July 31 before a spate of shows throughout the mid and south west. They play their home state of Texas over what will surely be three memorable shows at Austin’s iconic Stubbs BBQ, Sept 15-18. Check out the full tour info here.

Have you missed lining up for porta potties in the thick of summer while the scent of corn dogs and sweat fill the air? Well it’s time to pack up the pity party, because music festivals are back in full swing. In less than a week, Illinois OG Lollapalooza will return to Grant Park after being cancelled last year for the first time in its 30 year run. There are so many draw cards on the bill, but perhaps none bigger than Tyler, the Creator, whose new record Call Me If You Get Lost is easily one of the best releases this year. It’ll also be the first chance to see 2021’s Best New Artist Grammy winner, Megan Thee Stallion, perform live before she joins the festival circuit over the next few months. Who else? Full lineup here.

Since 2002, Tennessee’s iconic four day festival has been held on a 700-acre farm in Manchester, now known as Great Stage Park. Last year, the festival was first postponed until September 24-27, 2020, but we no all know that was wishful thinking. Bonnaroo is always a good time, but this year you can bet your bottom dollar it’ll be the best time EVER because it marks Tame Impala’s first live performance since COVID unceremoniously pulled the plug on their world tour last year. Other acts include Lizzo, Run the Jewels, and Tyler the creator. Tix and full lineup here.

Another incredible 2020 release that is yet to have seen the light of the stage is Phoebe Bridgers’ sophomore album, Punisher, which landed on just about every music publication’s top 5 albums of last year. The 26-year-old LA based singer songwriter kicks off her tour with what will undoubtedly be a very emotional performance at The Pageant in St. Louis, MO, on September 3. Tickets to every single show sold out in about 3 minutes after going on sale last weekend, so your best bet is trawling craigslist for a last minute score. Nevertheless, find all the dates here.

On March 11, the NBA announced they were suspending the basketball season due to COVID-19. On the same day, Tame Impala were forced to cancel their San Francisco show, despite raising the roof of the Forum in LA just the night before. On March 10, 2020, a sold out crowd in LA attended Tame Impala’s last show in 18 months. ‘How could it be’ pondered many, ‘that last night we shared spit soaked joints with strangers as multicoloured confetti rained from the sky, only to awake today, allergic to one another?’ Just last month, Kev took to his socials to announced some 16 rescheduled dates while  lamenting that due to ongoing Covid restrictions, some shows were impossible to rebook until 2022. Are you one of the lucky cities? Check here.

*Added bonus if you’re a Perfume Genius fan, as the Iowa musician will support Tame Impala on tour, finally allowing him to play songs from his incredible 2020 album, Set My Heart on Fire Immediately.

Of the many simple joys this pandemic has stolen from us, our chance to collectively gyrate together to ‘Watermelon Sugar’ by Harry Styles is perhaps the most cruel. Harry released the pop-laden Fine Line back at the end of 2019, and soon announced that he’d tour the world in 2020, to which 2020 replied, ‘lol’. Finally, after much rescheduling, the North American leg of  ‘Love On Tour’  will kick off in Vegas on Sept 4 with special guest Jenny Lewis, stopping in 33 cities in total.

Big Thief last released U.F.O.F. and Two Hands in 2019, and were lucky enough to tour around a bit before the whole world went to shit. During the downtime of 2020, singer and guitarist Adrianna Lenker recorded and released songs / instrumentals, which she will perform live for a series of solo shows starting Nov 5. Meanwhile, fellow bandmate Buck Meek will embark upon his solo tour on Nov 2, playing songs from his new record, Two Saviors. One band, many talents.

Chicago is spoiled this fall. Just over a month after Lollapalooza, the windy city will be graced with another epic lineup, led by absolute queens Erykah Badu and St Vincent. The rest of the lineup is actually nauseatingly good, too, featuring Cat Power, Animal Collective, Yaeji, Angel Olson, Kim Gordon, Waxahatchee, and Faye Webster. Whew. Find all the deets here.

Two words for you: Billie Eilish. Perhaps the biggest musician in the world right now, and easily one of the most frenzied live shows I’ve ever witnessed. It’ll be the first time the 19-year-old LA musician will perform music from her new record, Happier Than Ever, which drops July 30—so expect fainting and Beatles-esque fanfare. The whole lineup is pretty bonkers, actually, including A$AP Rocky, DaBaby, King Princess, Rufus Du Sol, Future Islands, Leon Bridges, Princess Nokia, and more. It’s all happening in Citi Park, NYC, and you can get tickets here.