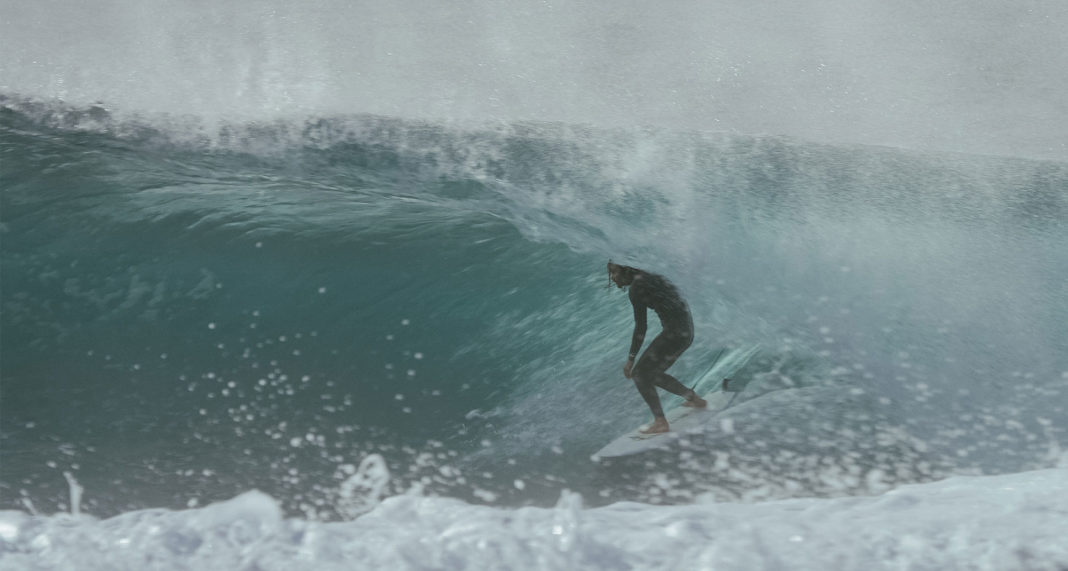 When I first saw Pama Davies chop-hopping over backpackers caught in the rip at south Bondi he would’ve been in his mid-teens.

He’s 22 now, and the only thing that’s really changed is the consistency of his facial hair. It’s gone from a wispy offering that he described as an “unwise, wise man’s beard” to a thick conquistador-style mustachio and goatee combo. And he’s grown a bit, proportionately, one of those people who look like you’ve pressed “command +” a few times. It’s always baffled me that Pama hasn’t received more love from the surfing industry. A handsome kid from Bondi Beach, the most recognisable stretch of sand in the world, who happens to be a world-class freesurfer seems like a marketing dream, but for years Pama didn’t receive the support he deserved. That all changed a year or so ago, however, when Rusty—looking to reinvent themselves and tap into the legions of coastal kids who’ve got little in surfing to rally around—shoved a piece of paper in front of Pama and made him a (admittedly modest) professional surfer for the first time.

When I met up with Pama and his best mate/filmer Dane Singleton yesterday morning, I had the suspicion we were in for some driving. We were in a region where there’s too many options. A three hour stretch of coast that has probably a hundred surfable options ranging from fun to death on a stick, all that work on a different combination of tides, winds and swell. Not to mention that checking the surf with surfers who’re looking to get clips on film is an entirely different sport altogether. See they’re not just looking for “fun” waves. They’re looking for angles, backdrops, waves that offer the surfer the opportunity to show an audience something that they might not have seen before. In short, it’s a total pain in the arse, and there’s a lot more misses than hits. And today’s no exception. We drive two hours south, checking various spots as we go. The countryside down this way is beautiful—rich soil making it rife for agriculture, and shocking green fields that run from the coast back to the mountain ranges that lurk in the distance. The surf to me looks really fun. Groomed two-foot spitters that had I been solo, would’ve had me out there in a heartbeat. But no one wants to watch footage of exceptional surfers threading two footers because it’s boring. After much ado, and a pie, sausage roll and choco milk combo, we point the car back in the direction we came from. “Argh… surfing,” says Pama as he jumps back in the driver’s seat of his “soccer mum” car.

Pama’s lived in the same house in North Bondi since he was born, and got himself to the level of surfing that he’s at today by pure bloody-mindedness. By that I mean he surfed Bondi Beach—one of the world’s most crowded, sub-par beachbreaks—every day, year after year. Anyone who’s lived and struggled as a surfer in the Eastern Suburbs of Sydney will appreciate what an achievement this is. Pama’s mum and dad have recently relocated to Bali, and these days Pama splits his time between his family home, Bali, and his girl’s folks’ place in Tamarama when his parents take advantage of their house’s positioning and beautiful interior and rent it out, although he says he’ll “see how long that lasts,” with a chuckle.

Pama and Dane have been a double act for years. Between Dane’s south coast abode and Pama’s city roots, the boys have tapped into a fair bit of fun over the past half decade. And it’s only getting better now that Pama’s got a little financial backing. The boys are currently working on a new edit, thus the day’s endless driving, and have already clocked up a European stint in Portugal earlier in the year, with a little Paris thrown in for good measure, and multiple Indo trips. The two bicker constantly, a common trait amongst really good mates, and in the car I ask whether they ever have any huge bust-ups on the road. Pama laughs. “Dane’s the most stubborn person in the world,” he says, with the instant rebuttal of, “And Pama holds a grudge.” We all laugh. The ironic thing about surfers like Pama is that they get paid to perpetuate this care-free coastal lifestyle—just hanging out, surfing, chilling—but the reality is that they actually work super hard to get the footage and photos that justify their existence. And at times, it’s stressful.

We eventually end up back in town after checking six different spots, at a slightly wobbly-looking wave breaking on a rock shelf covered mostly in sand. There’s no one out though, and the sun’s made an appearance for the first time in days. I had a horrible time—the surf being bigger and shiftier than it looked—but it was a useful exercise because it’s the kind of conditions that showcase just how good these guys are. While you (I) struggle against the rip and getting conned into going waves that look good but end up on dry rock, Pama’s catching wave after wave, slicing casual turns off the top whilst waiting for the end section to form, and then racing and spinning over the dry end section. In the surf we chat life and love, and when a seal followed by a huge pod of dolphins swimming right at us has us a little spooked, Pama tells me that dolphins keeping their more sinister aquatic neighbours away isn’t an old wive’s tale. “In south Oz we were surfing this remote spot and these dolphins were circling us the whole time,” he tells me. “Suddenly they all flipped onto their backs and started slapping their tails at us, warding us in and onto the rocks. There was something out there for sure and they were telling us to get out.”

On exiting the surf Dane tells me that Pama did a “finner to reverse that was pretty smooth” that they can use for the upcoming clip. Then, the boys get the call that a remote wave half an hour or so down the coast is on. It’s getting towards three in the afternoon, and it’s the shortest day of the year, leaving just enough time to get there, walk the track and fit in a surf before dark. “I’ll go,” says Pama, and we swiftly part ways, me heading north to Sydney, Pama and Dane south. Stuck in traffic in Nowra, I receive a captionless video from Dane. It’s a perfect looking three foot left spinning off a shallow rock shelf. With a mixture of jealousy and some jubilation that the boys finally found something, I press on past the car dealerships and industrial estates of what has to be the south coast’s most dismal town.

Watch this space for the follow up to “Dabble”.