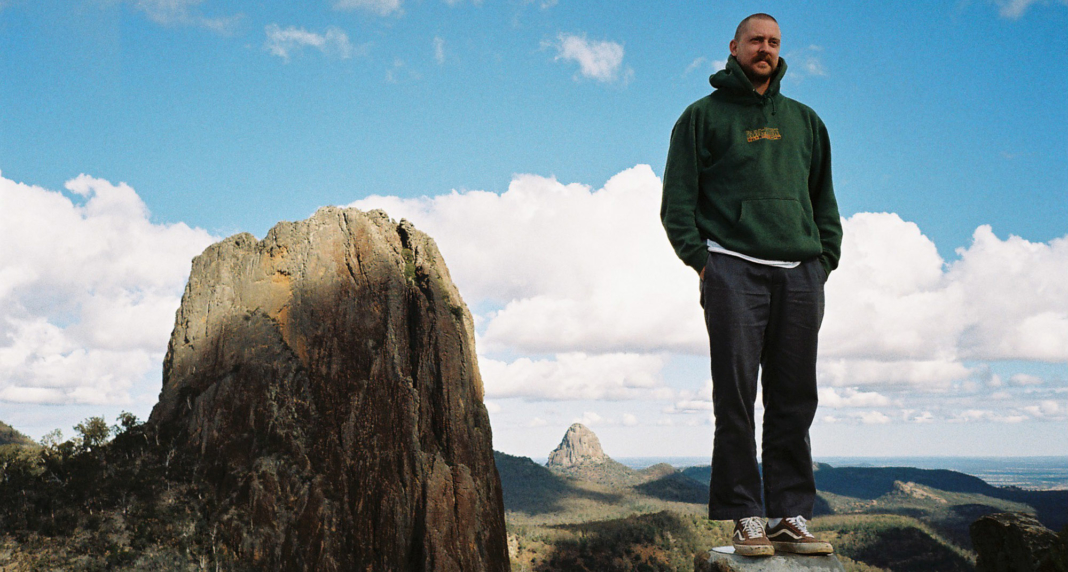 Marcus Dixon’s illustrations are somewhat retro, incredibly clean and they showcase a relatable version of Australiana.

Among his more recognisable drawings is an ode to the Stuart Highway, an image of folk musician Paul Kelly with Luna Park on his head, and a bull rider astride the Sydney Harbour Bridge. And even if the name doesn’t immediately ring a bell, you’ve probably seen some of Marcus Dixon’s art. He’s one of the guys who designs board graphics for Pass~Port and does t-shirt illustrations for The Grifter Brewing Co. He also has his own clothing company called Come Sundown. Skateboarders will remember his portraits of the Pass~Port team, printed on a scarf that came with the brand’s 2019’s full-length video, Kitsch. And Come Sundown was recently in the spotlight when Rowan Davis’s recent part, Meadow, dropped online. In light of Marcus’s talent for making work that is not only aesthetically pleasing but layered with meaning, I caught up with the dude to ask about what influences his practice, the time he met Paul Kelly, and what Come Sundown is all about.

Hey Marcus, are you from Newy?

I’m not from Newcastle originally, no. My dad is from down this way though, and there is actually a big park by the beach named after my semi-distant relatives: Dixon Park. I grew up in Old Bar, which is two hours north of Newcastle. It’s a tiny beach town on the Mid North Coast. It was a super chill place to grow up; a lot of booging and fishing. This year Old Bar actually got its first decent coffee shop, which was pretty exciting. But I’ve been in Newcastle now since 2009. It’s funny because it has most of the hallmarks of a tourist town—great beaches, close enough to Sydney, decent cafes, pubs, vineyards nearby—but it doesn’t really draw the tourism card too much. Probably due to its heavy industrial background. I find that just as interesting as the beaches though.

PLAN FOR THE BEST hoodies and tees online now

Yeah, Newcastle is the biggest coal port in the world. I saw one of your Come Sundown shirt designs has some mining equipment paired with the slogan: ‘The mass of faceless men lead lives of quiet desperation’. I’m interested to hear about the concept behind that work.

I always found enormous mining equipment super intriguing. It’s all so violent and aggressive looking, especially at night. That particular quote came from my friend Andrew Nash who has a knack for linking imagery and collecting interesting points of reference. I sent him the illustration after we had been talking about a graphic based on the mining equipment and he sent the quote back. The quote itself is an altered Henry Thoreau quote: ‘The mass of men lead lives of quiet desperation.’ The addition of the word ‘faceless’ was a nod to the graphic, which also fit seamlessly in with the original quote. I guess it was a pretty pessimistic breakdown of people not doing what they want necessarily, but what they must. Another one of Thoreau’s famous quotes is ‘Not that the story need be long, but it will take a long while to make it short.’ I thought that was interesting too.

What is it about that quote that you like?

For me, personally, it always takes the longest to come up with something simple yet visually effective. You work hard at things to make them as simple as possible.

What’s your background with art-making and design? Your work is super clean. Do you have formal training as a designer?

Yeah, I went to uni for fine art for a year and then visual communication design for three more years. I guess I was drawn to the business side of things in a way and that’s why I changed to the design course.

Come Sundown is incredible. How long has it been around for? I’ve heard you describe it as a passion project but it seems to have been gaining a bit more attention over the past year or so.

I think it has been about five years but pretty speckled. I mean, it has always been there as a side project, but I’m slowly investing more time into it, especially at the moment with lockdown and more lockdowns looming. I started it with a friend but now it’s just me. I have help here and there from other people. It is nice to float ideas around with them.

Some people were probably first exposed to Come Sundown when they saw Rowan Davis’s Meadow part. Rowan is also the current Australian SOTY and has been on an absolute tear for the past year or so. How did you get him involved?

I think it was basically just a word-of-mouth situation. He is from Medowie, which is just north of Newcastle, and I heard he liked the clothes so I just messaged him one day to see if he would like some Come Sundown stuff and he was keen. And then a few months in, Izrayl Brinsdon and I started talking about making a little part for him, supported by Jenkem, most of which was to be filmed in Newcastle. That was super-fun. Iz and all the filmers did a great job. Our other mate Jason Campbell [who produces music as Collector] made this amazing track to go with the part. It all came together nicely. Rowan is crazy good and a heaps nice guy, so it is great to be able to support him a little bit.

Is he the only dude on the team right now?

Yeah, technically I guess, but in saying that it was never started to strictly be a skateboarding brand or anything. It’s more an avenue of graphic output. But it is nice to be able to support friends who also support me, so a win-win.

I would imagine that even people who don’t know your name would certainly have seen your work in association with Pass~Port and The Grifter. The Kitsch illustrations and so many board graphics that I’ve personally owned were drawn by you. How did you get involved with Pass~Port?

I think it was back in 2013 or so. I emailed Trent [Evans, owner of P~P] to see if he would be interested to be part of a show I was organising and he asked if I could make him up some board graphics. It was only a few weeks after I bought my first P~P shirt too so I was pretty chuffed.

Do people ever assume that Trent Evans is responsible for your work?

I just assume that because there is a lot of graphic output from him and the other guys that work in-house there that it all might get rolled into one. It’s basically an aesthetic he created that I try to work under, if that makes sense. And then maybe because I have worked with them for a while, my personal style has positioned itself in the aesthetic a fair bit too.

Tell me about the Paul Kelly collab. What was he like?

That was an interesting one. My friend Izrayl [Brinsdon] had been trying to get an interview with him for some time. I think it was a year or so. Then more talks were made to use the project as a stepping-stone to raise some funds to build a skatepark extension for the Bidyadanga community south of Broome in WA. Then, after some negotiations, a few of us were allowed to go to his place, take photos, film and do a recording. It was pretty funny actually. Waleed Aly and The Project crew were leaving as we were arriving. They had like $200,000 worth of equipment and were loading it all up in the van as we got there. We turned up with one 16mm camera, a mic and a Bronica. Paul turned to Waleed and goes, ‘These are the skateboarders,’ as we were going through the gate [laughs]. He was nice though. But we ended up raising enough money to extend the park in Bidgy and Iz made a clip based on the trip so it was a success, I’d say.

What’s the next project that you’re working on?

I’m working on some stuff for a new venue in Newcastle called The Ship Inn so that’s quite a fun one. And I’m just going to try to put some more stuff out through Come Sundown. 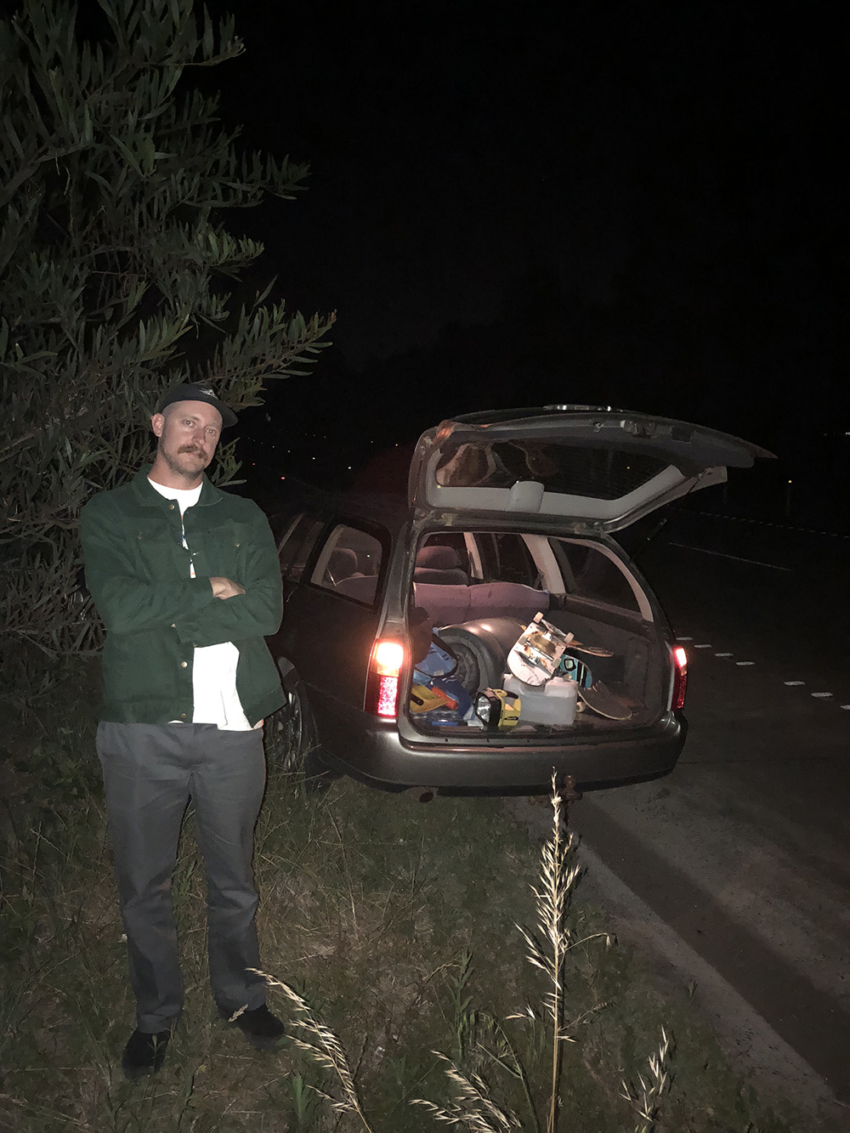