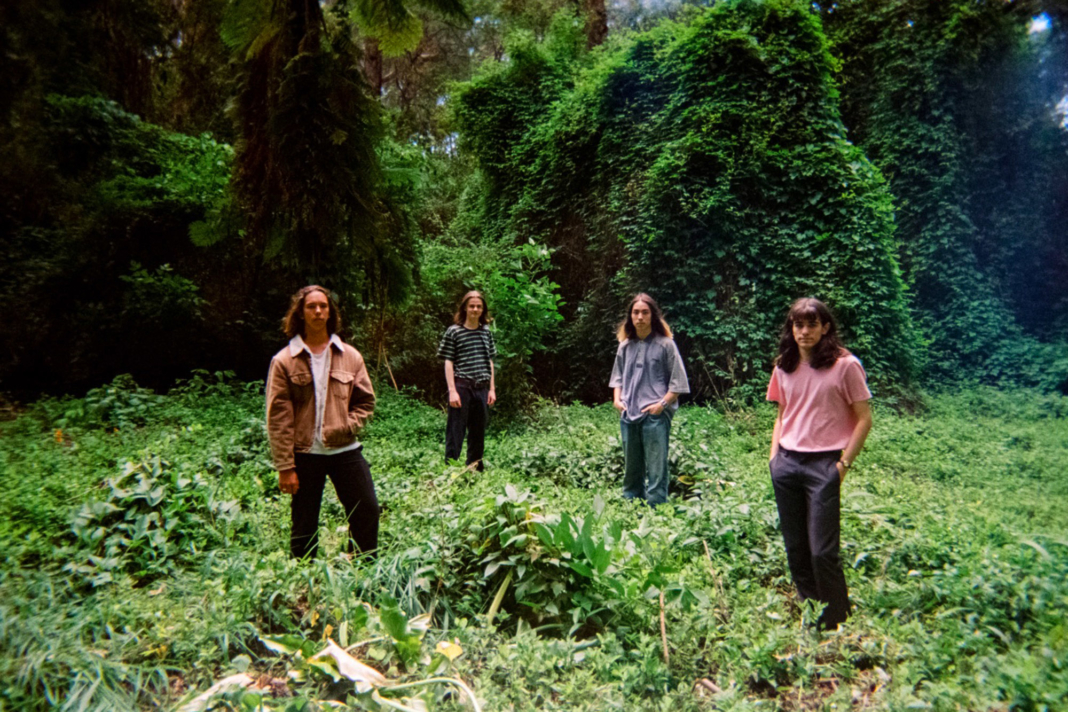 The Lazy Eyes formed at Newtown Performing Arts High School, and since graduating in 2018 have flourished into Sydney’s finest. Fully realised from the get-go, they quickly turned heads with their unique brand of psych-rock. Although rife with nods to bands like King Gizzard and Pond, their music retains a youthful freshness that, rather than recycling, reinvigorates the ingredients they have taken from their heroes. This naive charm culminates in a simplicity and cheekiness that has garnered comparisons to The Beatles and The Kinks. With their furious momentum suddenly stalled by COVID-19, the band found time to chat to us about song-fermentation, meeting their heroes and the beauty of nonsense.

It’s lazy music journalism to ask about band names. So… do any of you actually have a lazy eye?

Itay: He’s just incredibly shy. He won’t look you in the eye. But, no, the way the band name came about was I was on a plane, and y’know Beach House? They’ve got this lyric about ‘the girl with the lazy eye’ and I just heard that and was like, ‘I’m having that.’

You guys formed at high school; is it weird transitioning into an ‘actual’ band?

Harvey: I should probably say that we weren’t formed by the school, like a school ensemble. I always thought that the band had its own separate world. But being out of school has obviously freed us up a lot and we’ve got much more spare time. Maybe a bit too much spare time now.

Was there always a clear vision of what you wanted the band to be, and you’re only now getting the chance to realise it?

Itay: I think while we were in school there was a lot of pressure, like we were all heads down bums up with the HSC. But there were always a lot of ideas building up, and once we got out of school, it just became easier to start doing the things that we couldn’t do at the time.

Your songs have been fully realised since day one. Is it weird sitting on them for so long?

Harvey: I’ve thought about this a few times, actually. I feel like most bands just pump out music at a faster pace; I’ve seen interviews where they’re like, ‘we love playing new songs live,’ and I just thought, ‘we haven’t played a new song live in years.’

Itay: Which isn’t to say we don’t have them. But it’s like an endless bucket list. Like, we’ve got our first EP coming out on the 5th of June, but we finished recording it two and a half years ago.

Do you have any songs that you can’t stand anymore?

Harvey: We are just way past being sick of all of our songs. We were sick of our songs two years ago. And now it’s just like, zen mode. Buddha-feeling.

Blake: You know when you’re so tired that you transcend the feeling of tiredness? It’s like that. We’re so sick of them that we don’t have any emotional attachment to them at all.

You played at Laneway earlier this year. What was it like going from idolising and emulating bands like Gizz to literally sharing the stage with them?

Harvey: It was really weird. The way the audience sees festivals is so completely different to when you’re actually backstage, y’know? Suddenly it wasn’t such a huge leap from our league to theirs. Like, we thought they’d have their own backstage. But in reality, all the bands are there together, hanging out.

Blake: I shared a bowl of chips with Tones and I.

Nice. Did you make friends with any of ‘em?

Harvey: One cool moment was when we went up to the drummers from Gizz, and Eric [Moore, King Gizz drummer] was like, ‘Oh you guys are from the Lazy Eyes, right?’ And we were like, ‘Oh my god.’

You’ve got a pretty engaging live show. Are you actually getting into it every time you perform, or is there an element of showbiz?

Itay: In terms of the moves and stuff you’re mentioning, over time there’ve been certain movements that evolve their way into the set, that you kinda repeat. It becomes like a guitar part. Like a bit of choreography. We used to have dabs in our live set.

Itay: But that’s the other thing—everyone acts different onstage, so what the audience thinks the person is like is actually just their stage persona. Like, I might do some crazy guitar moves, but that doesn’t mean that if I’m at a party I’m gonna be writhing on the floor. You know?

In what context did you write the lyrics for ‘Tangerine’? They’re kinda nonsensical but still work.

Itay: The lyrics definitely just happen. And don’t really mean… anything. Something interesting about those lyrics, specifically, was that my only goal was for them to sound good phonetically. For them to feel like they flowed. Almost like the way a guitar tone sounds good, just treating them as a sound, rather than as words.

Harvey: We never really write lyrics, where the words come first and then you try them out in a song. We mainly just write them by humming along and then if a string of words happens to come out, we’ll quickly write it down.

Have you ever covered ‘Careless Whisper’?

Harvey: You know what? Yes. We had two friends in high school who played the sax and, man, ‘Careless Whisper’ was on weekly rotation. Maybe daily. And one of those sax friends—I shit you not—had a big-ass lazy eye.