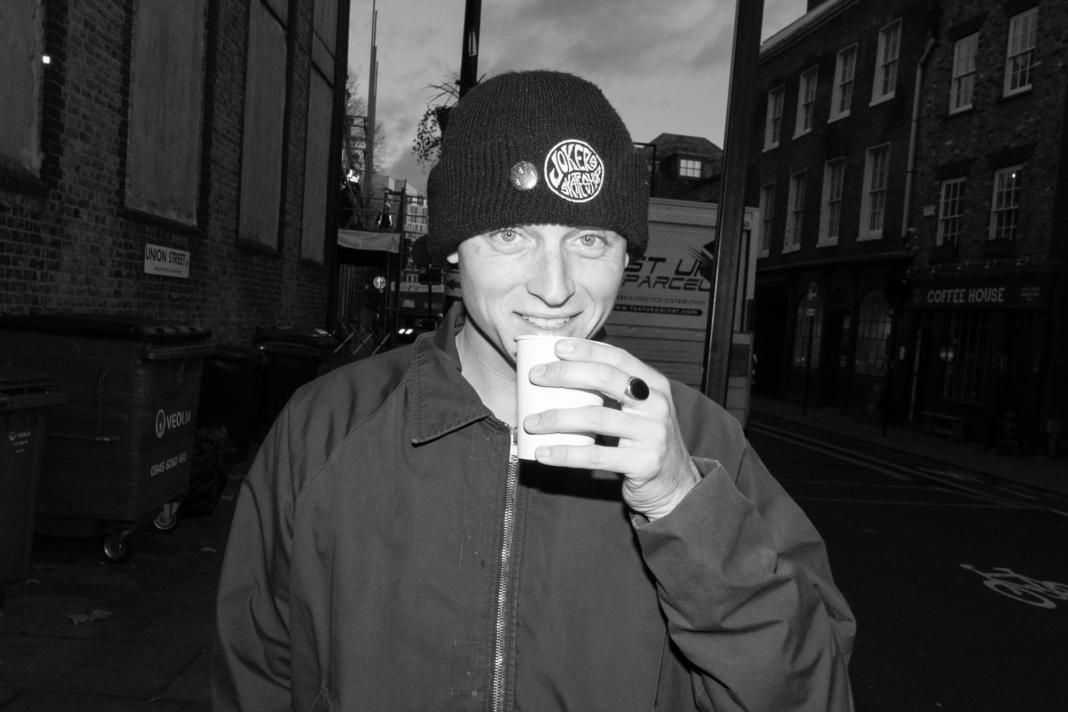 Michael Cukr is a dork. Nerd boy of the highest decree. He wears cartoon pj’s and listens to grindcore. Need to know what year the Sumicron Version 4 Apsh Leica lens glass was made in Germany? Ask Cukr. Wanna know what record label put out The Scientists song that Corey Duffel skated to in Foundation’s That’s Life video part? Ask Cukr. He’s a multi-faceted creative wizard, from the darkroom to the editing bay. And you know who else is a mega dork creative wizard? Brian fucking Eno. So I guess what I’m saying is, Cukr might just be the Brian Eno of our weird little subculture… if Eno wore Stewy pants and listened to Eyehategod.

So, we’re gonna chit-chat and then we’ll just pick out the bits that are cool. Let’s get into it: how much money do you think you owe me?

Ok so, you’ve always been interested in shooting things, right? Let’s talk about the beginning of that.

The beginning of that was my obsession with skating, starting at six-years-old.

You were more of a skate dog than a surf dog when you were younger, huh?

Yeah, well, let me finish the camera thing, then let me tell you more about my disdain for surfing when I was little.

You’re going to have to keep up, this thing is moving quick. We’re on a highway here, man, we’re taking off.

You’re intimidating me now. So, cameras. I was just watching skate videos and wanted to film and make skate videos and like, get sponsored. We would all just take turns filming with my dad’s camera and I had no affinity toward filming at all. Then once you become the filmer, you’re the filmer and people stop taking turns. It’s like, ‘you’re the filmer and fucking editor now and we don’t give a fuck, you’re not skating.’ 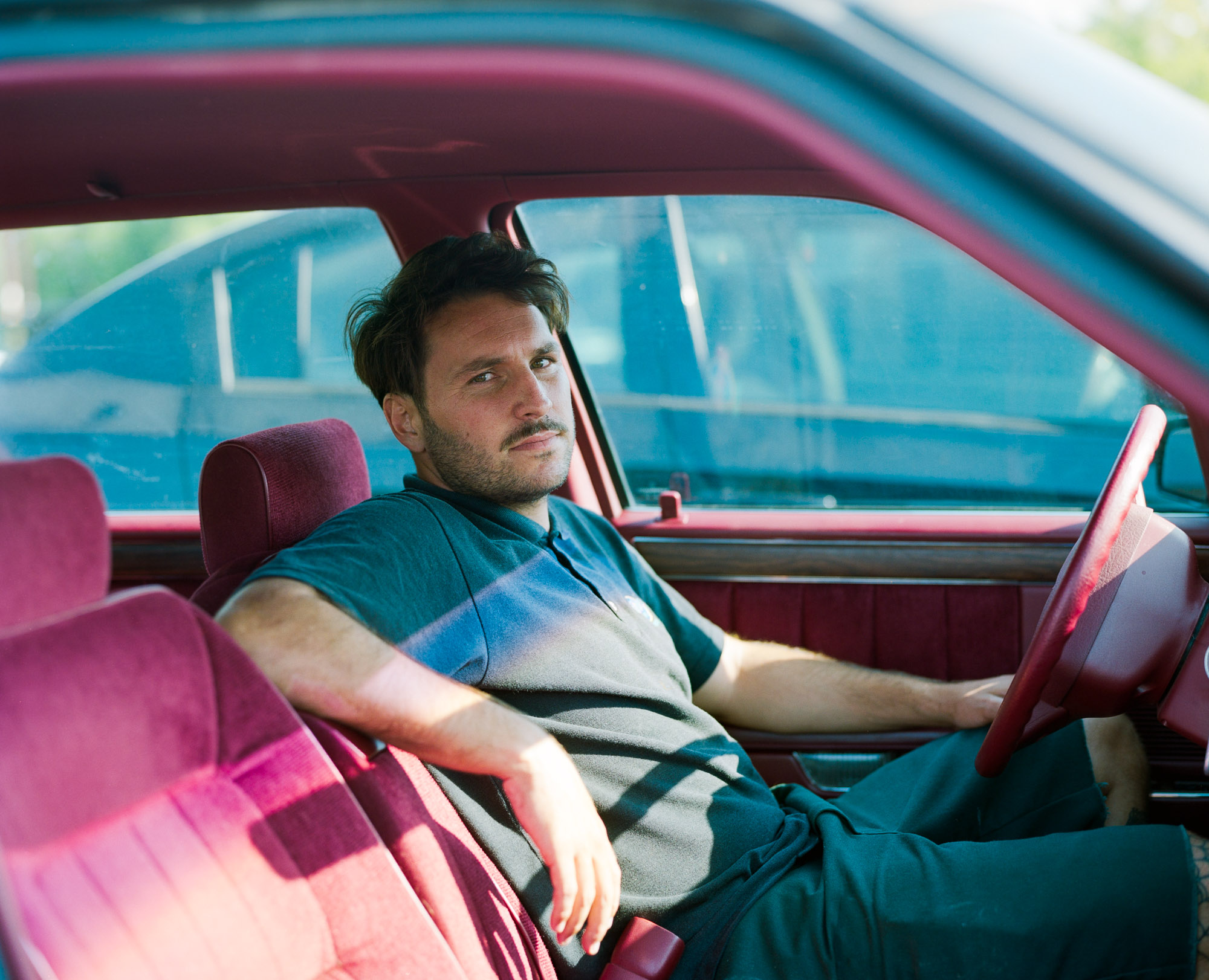 ‘Give the camera to Cukr—he knows what he’s doing.’

Yeah, so around that time I started noticing that certain tricks in videos were timed to songs, and I was like, ‘Oh, woah, they actually planned that, they edited that? I wanna learn how to do that.’ That was the beginning of that spark. Then I started caring about that a lot more than skating. And I don’t know, man, skating’s fucking scary. Once you start skating stuff that’s bigger, it’s fucking gnarly, it blows my mind what people do now.

Yeah totally. You’re a damn good skater too, though.

Thanks. I did that forever and then it started getting scary and all my friends got like, good good.

And then did that lead to photography?

Photography was at fourteen or fifteen years old. At that point I knew how to  make skate videos that were put on YouTube.

Are they still up?

Oh yeah, for sure. That was the thing back then, making a homie video and making a trailer. I remember we went on two trips and we had no footage, there was no fucking full-length in the works, but I made a trailer and that thing is still on YouTube.

Wait, like a trailer for a project that was coming up, but you never made the project?

Yeah, but photography came later. Around that time, I thought I had everything figured out and knew everything that I needed to know.

Yeah, I could export a video and put it on YouTube—I’d made it. My grandma was friends with John Dykstra, or she still is, who did all the special effects for Star Wars, he did Once Upon a Time in Hollywood, Inglorious Basterds… he’s basically credited for any special effects thing now. So, she set up a lunch between me and Dykstra and he was like, ‘So, what do you do, what’s going on here?’

How old were you?

Dude, the thing was, though, I was kind of arrogant. I didn’t really care that I was meeting this dude, I was doing it as a favour to my grandma. He was telling me all these cool stories, like that he’d shot The Doors and told me about printing in a darkroom, and shutter speeds and F-stops. At that time, I didn’t know what any of those numbers on my camera meant, I was just like, whatever, but that lunch set a fire under me. That was so fun and cool and new. The next year I ended up getting home-schooled from public high school so that I could take college elective printing in a darkroom, and that’s when that whole thing started. I became obsessed, I’d buy a camera and instantly run film through it so I could see what it looked like. And you would just shoot photos because you were stoked on the camera, not because it was even something worth shooting. I’m still obsessed with it. I’m a fucking nerd. 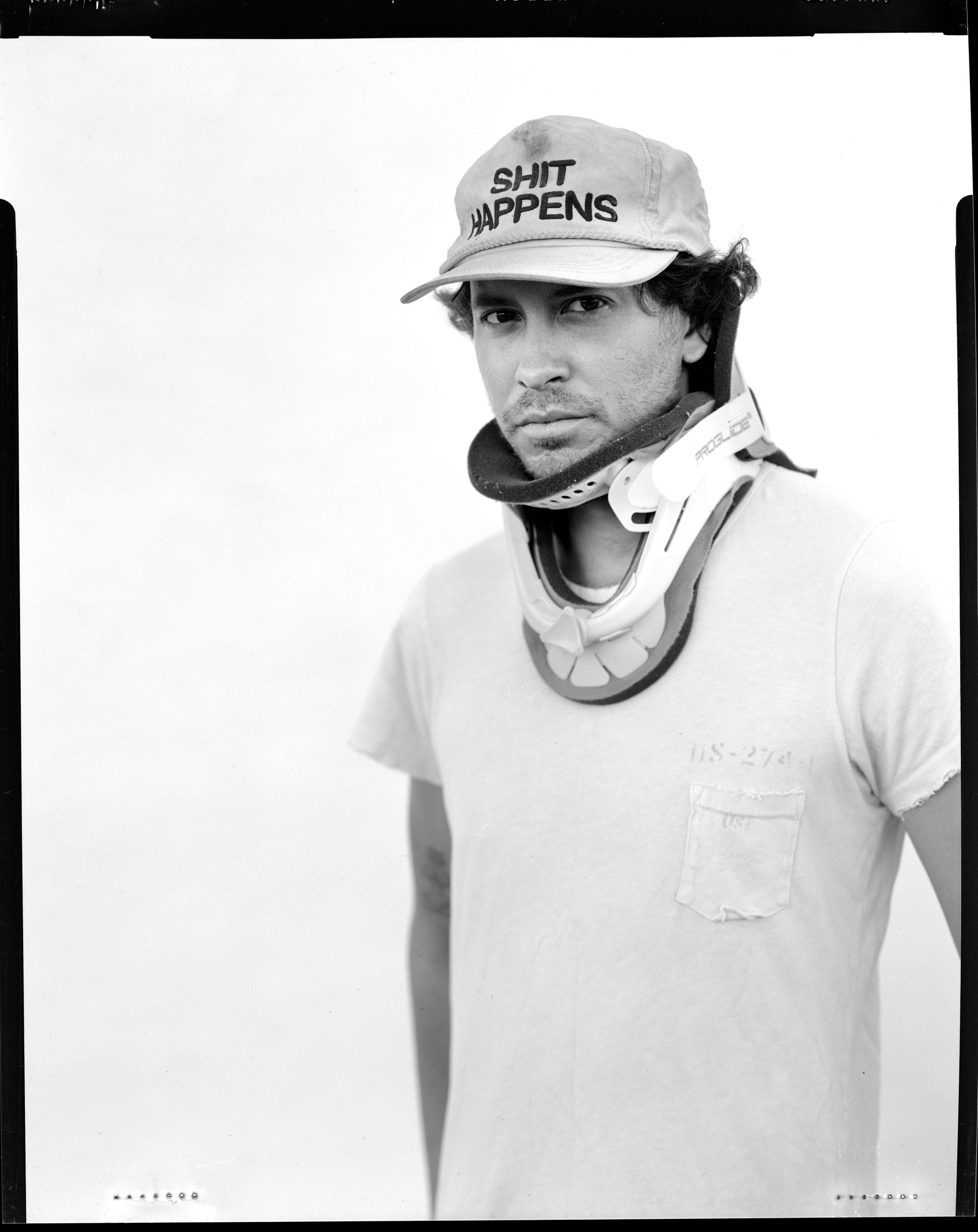 So, the whole time you’re nerding out on all the film stuff and kind of leaning into skateboarding and your pops is like this pro surf dog—is he just looking down at you like, what the fuck is my little man doing?

(laughs) Sort of, he used to be a pro surfer and rode for Quiksilver; he’s on posters with Kelly Slater and shit, which is so funny.

He tried to get me into surfing when I was little and I hated it, I hated the sand and the wetsuit and whatever. Also, once I became a skater I was like dude, surfing is so kooky. It was like, shitty pop punk and boardshorts down to your shins. Why would I wanna do that? I’m looking up to Dustin Dollin and Ellington, I’m not going to wear boardshorts down to my ankles.

You just didn’t even identify with any part of the culture?

Especially back then, there seemed to be a real divide between surfing and skating.

I learned to appreciate it later, but at the time it was like, Trilogy that had Angels and Airwaves and then at the time I had Baker 3, and I was like how can you even…? And then I got in a car accident and I hurt my back so I couldn’t skate anymore, I couldn’t take the impact of concrete. And my dad at the time was still going surfing every day, so I was like I’ll go surfing just to do something. For whatever reason I just ended up loving it and sticking with it from that point on.

So, you back it now?

Yeah, totally back it.  At the time too, once I got into it, I felt like surf media was so much more entertaining than what was going on in skating. Skating… I dunno, it just felt stale to me and surfing has this really dope new blog world, like you’re in Dion’s shit like Proxy Noise, and then Dane… I don’t know if it was Marine Layer yet, it might have just been danereynolds.com or something, and then the 3 Slobs. It was just a ton of creative people doing all their own shit, and it was coming out all the time. It was so much more entertaining than whatever was going on in skating, waiting for a full-length or whatever. 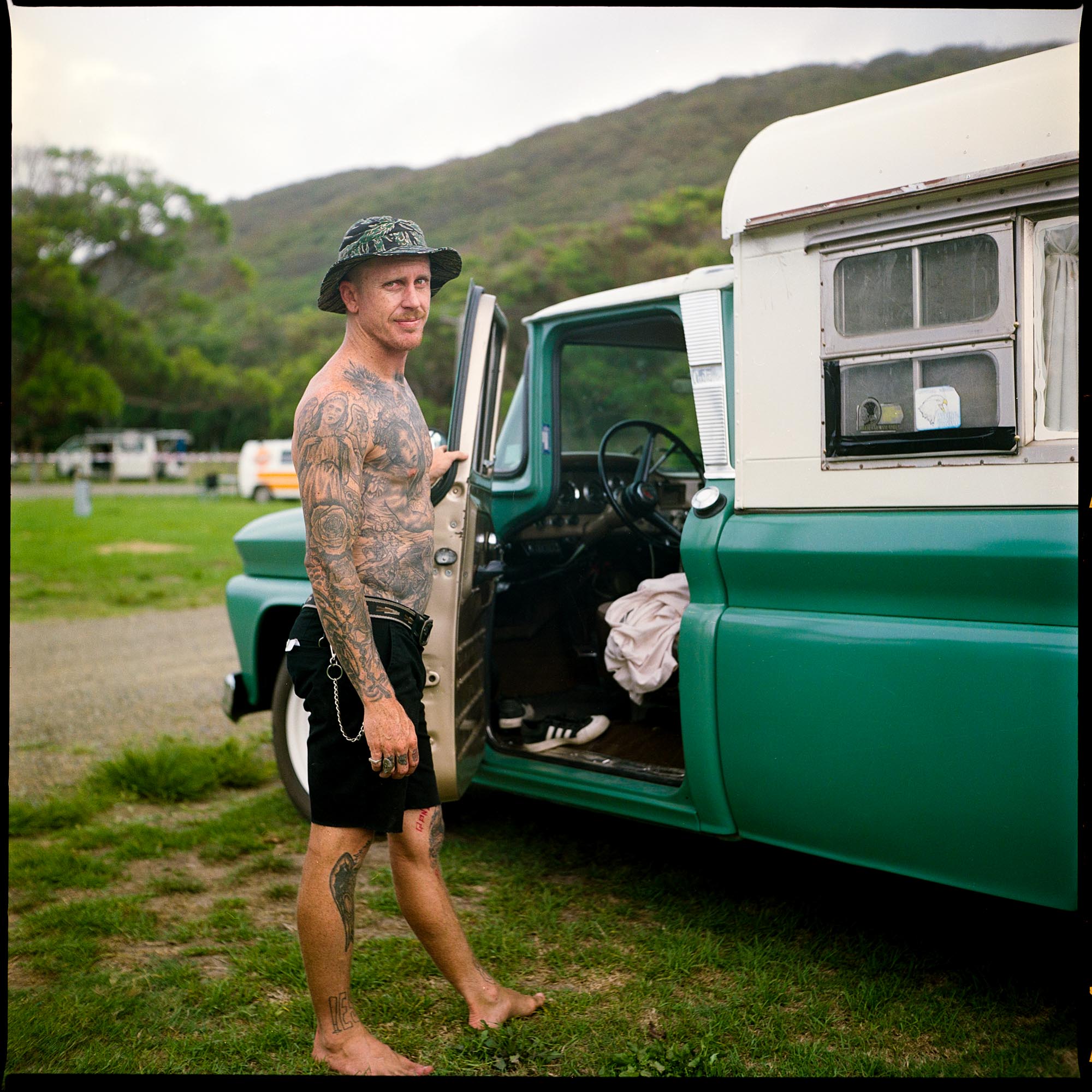 That’s interesting, I didn’t even really think of it like that. Surfing was kind of ahead of the game with that.

I would say so, I don’t think skating ever really did that. Kai Neville was making movies then, Joe G was making movies, and I totally turned my back on skating. That’s when I started to hit up the 3 Slobs, like, ‘Yo, can I film for you guys? I like what you’re doing.’ From that I met Tom, then from that I met you which, you know what happened.

So, you cut your teeth at What Youth, got some experience and found your voice. Then you took off on your own and started doing freelance. That must’ve been a fucking scary thing, that takes a lot of balls to go out there and start emailing Cory Duffel and stuff. How did all that go, you started Xorbent right?

So, I quit What Youth and I was like I still have this momentum, I have the ability to make this shit and I have the connections from skating my whole life. I want to keep doing this, where should I put it? I just wanted to make a new home for shit like that… It felt easy to just make shit for something that already existed. I was really inspired by DIY hardcore labels and things that you’d come across that’d be like, oh there’s only twenty of these from the 80s, that was it. I felt like the best way to do that was like, fuck it, I’m gonna make my own YouTube channel that’s not my name, I’m just going to make this little home for this style of work that I make. That way it’ll give me a place to at least click upload and people can take it and post it. Whoever wants it, they can have it, and that’s that. I thought that was my best option in terms of what I’m capable of on my own.

You’re basically trying to make something independent that reflected all your interests.

I want Xorbent to be this is me, from start to finish. I produced it, I came up with the questions, I filmed and edited it, graphics, whatever… that’s all me.

You got any advice for young filmmakers who want to band out on their own? Let’s hear some inspo from Cukr?

Learn how to use TikTok. That’s where all the money is. It’s fucking crazy.

I don’t even know anything about it, what do you do? 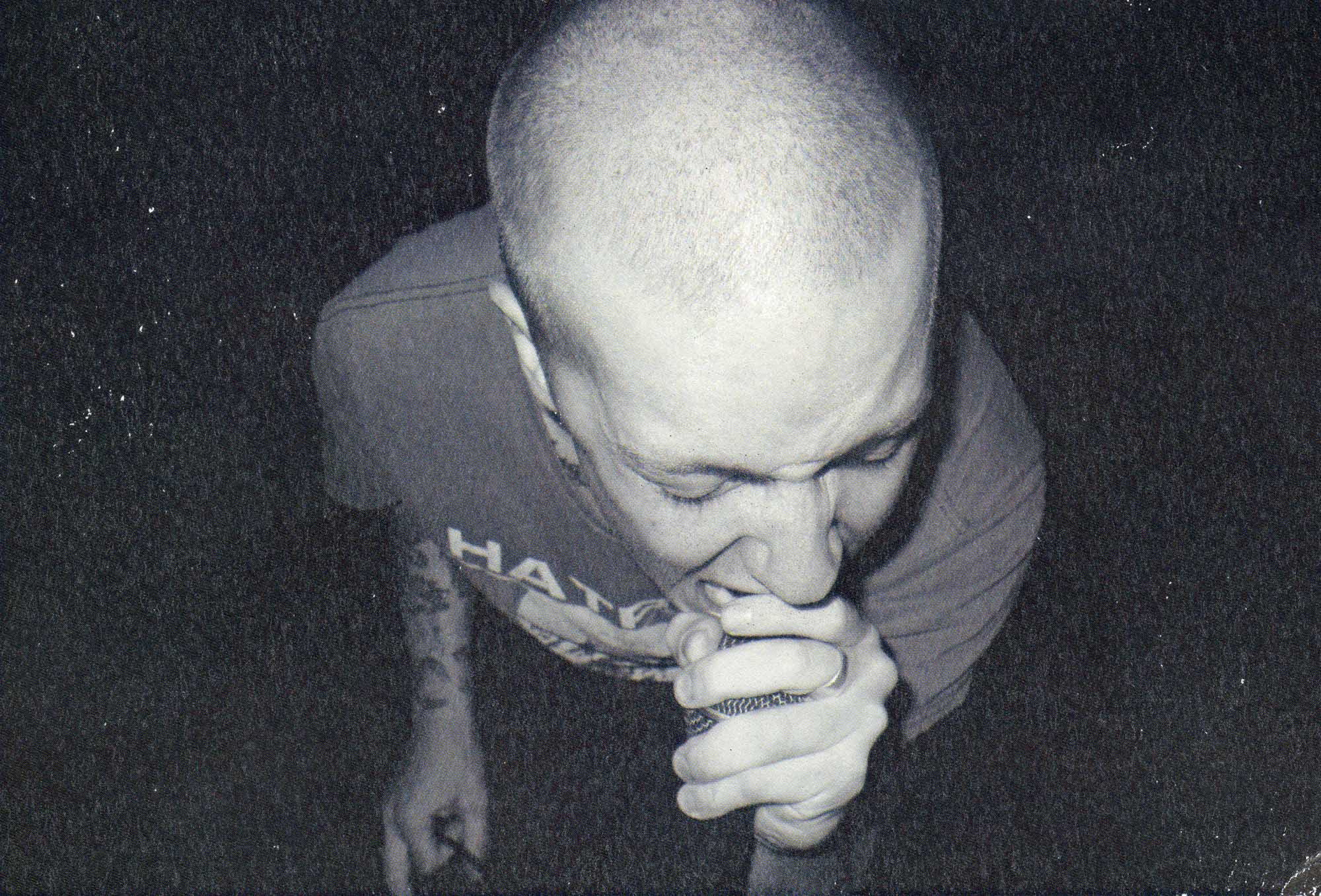 Okay (laughs). You started super young though; you went through magazine stuff and now you’re out there on your own shooting… you don’t got anything to say to little 19-year-old Cukr?

I think to figure out what you want to do, you have to make a ton of work and become really familiar with your cameras. It’s really hard to do that, because at the beginning your work doesn’t feel special, but when you look back at that stuff it’s kind of like what defines you. All my photos I shot when I was super little, they didn’t really sing to me, but now when I look back, I’m like, ‘holy shit, I’m still really proud of this work.’ I have some photos of friends who have passed away and at the time I didn’t care about the photo and now it’s really special to me. You can read books or watch films, and those things can kind of point your inspiration compass, but you’ve got to shoot a lot and put yourself in different situations to learn what you do or don’t like, then keep doing them.

There you go, you just gave your first inspirational quote to some little Cukr out there, bugging the fuck out of someone with his arrogance. You just set him on his path. 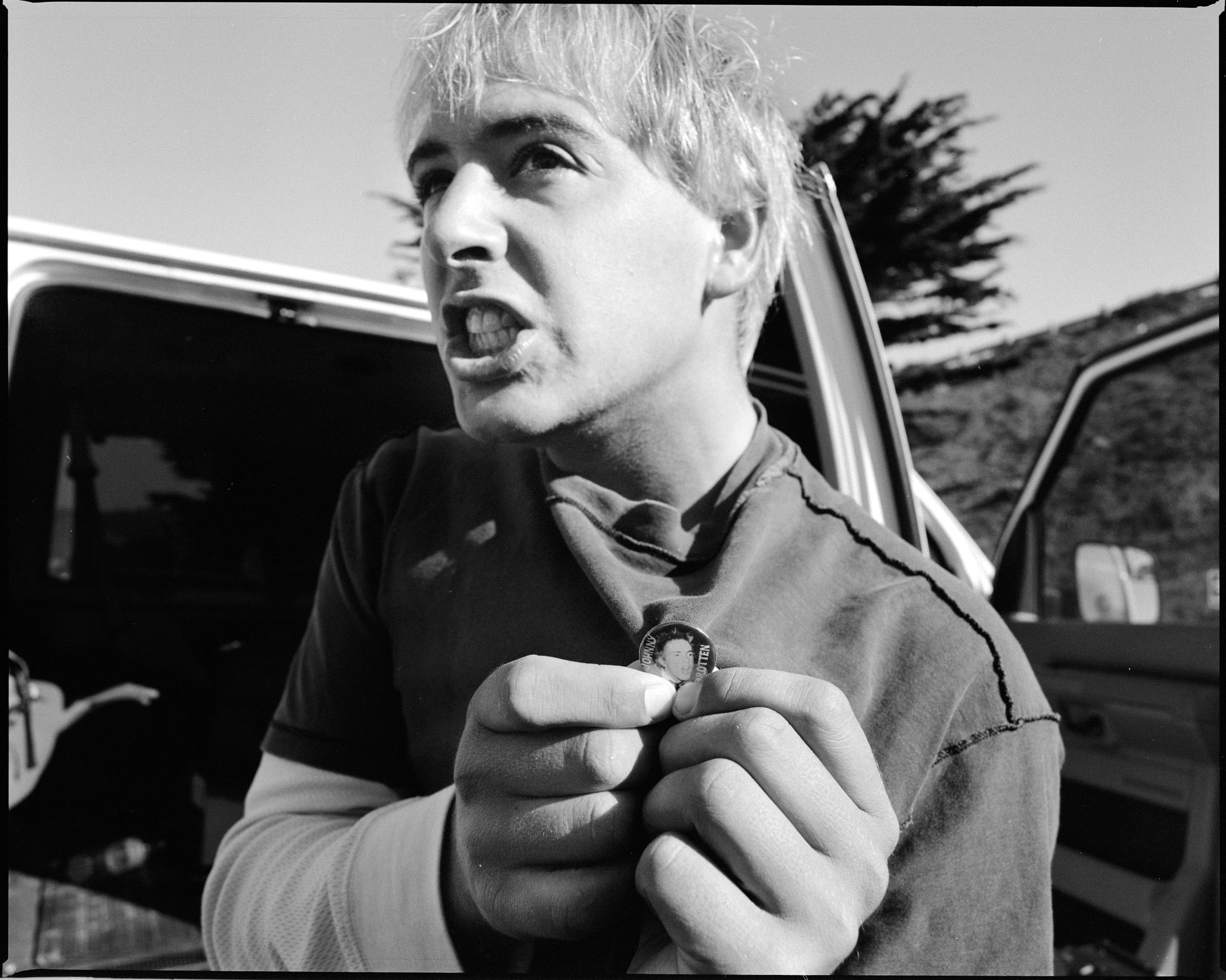