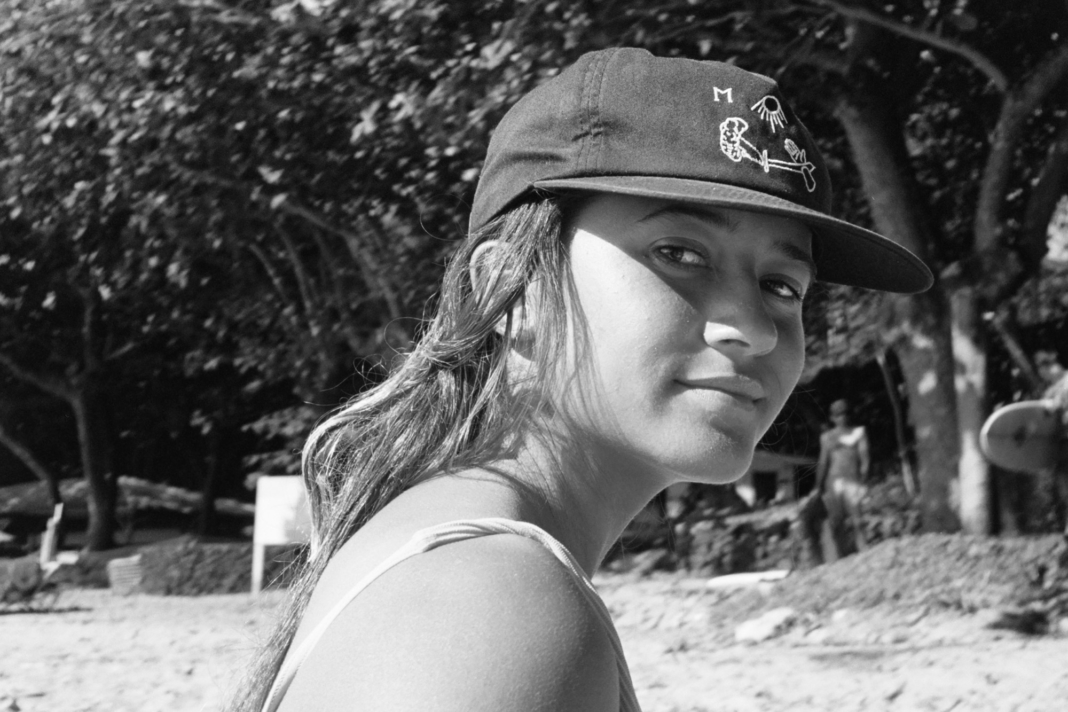 She surfs, she acts, she’s Aquaman’s cousin, and she’s waaaaay smarter than you and me. Who is she? She’s Mainei Kinimaka. At just 22 years of age, Mainei has done kinda everything. Not literally everything. She probably hasn’t climbed Everest yet, but she’s definitely the sort of spirited person who could and would. She is a blindingly bright young thing and at the time of this interview, she was in Hawaii thinking about whatever it is she wants to do next. The world is very much this girl’s oyster. Let’s meet her!

Let me get this straight, you’re an actress, a model, a professional surfer and a straight ‘A’ student with a degree in Cultural Studies.

Yeah, that’s it. There’s a lot of random things I guess, but yeah, pretty busy.

You started surfing when you were super young, like four, right? Maybe we should start there.

Yeah, my Dad pretty much put me in the water from day one, but I started on my own at four, and my sister surfed too.

Well, I definitely always surfed, but I actually remember in the first time my Dad got me to go surfing on my own. This is so bad, but we have this thing called Fun Factory in Hawaii. Do you guys have something similar in Australia? It’s kind of like an arcade?

My dad basically said ‘Well, you know, if you wanna go surfing, I’m gonna go surfing, but if you go on your own board—and I’ll push you in—then we can go to Fun Factory. And I was like, ‘Oh, sold, for sure!’

Are you kidding, that’s how your Dad got you to surf?

Yeah, I remember it so vividly, and that was the turning point. I was definitely going to go on my own board.

So, your passion for surfing was born at Fun Factory.

And now you’re a professional surfer.

So, you’re a Roxy model, an actress—which I’ll get into in a minute—and a professional surfer. Which one is taking up most of your time?

It’s kind of crazy how all over the place it’s been, but I pretty much started competitive surfing at… I think it was eight when I did my first contest. I surfed competitively all the way until… Gosh, I think it was three years ago now? And I did all the typical juniors, nationals, and then I did QS, starting in my tenth year in high school, so I did the QS all the way through high school. I went to a public school and I’d been with Roxy since I was ten years old; they gave me the option a year or so after I finished high school to go full-on free surfing; I didn’t have to do contests anymore. They said you can just free surf and go on trips and model and stuff like that, and you don’t have to do the QS. And at the time I had just lost second round in Pantene or somewhere where the waves were like 1ft, so I was like, ‘That sounds pretty good!’

So you’re a free surfer now.

Yeah, I’ve been free surfing and just travelling and doing trips for like almost three years now, and that was really cool because my mum is a school teacher and really adamant about me going to university and getting a degree, and my sister is super-smart. She graduated from Stanford with a degree in engineering.

Yeah, so it was the perfect time to start going back to school, so I started getting my degree in Hawaiian Studies. I kind of wanted to focus more on the Hawaiian language; my goal with that was to give back to my community and be a Hawaiian language teacher, ‘cause in the public schools they don’t really teach it any more.

Is it being phased out or…?

When I was really young there wasn’t many options for Hawaiian immersion schools. It wasn’t really spoken that much and was kind of getting lost, but recently there’s been a lot of cultural revival with… Are you familiar with the Mauna Kea movement?

Yeah. That was happening just this past year, but basically this company called TMT was trying to build these crazy telescopes on Mauna Kea which is one of the most sacred spaces. So, that whole thing happened and there was this massive protest that is still actively going on. Basically, people were occupying the road where they were going to build the telescope and so that whole thing got a lot of cultural revival and directed a lot of people’s attention to Hawaiian indigenous issues. So, it is coming back a little bit.

I mean, it should be mandatory curriculum, right? You know in Ireland they teach Gaelic all the way through school.

Yeah, it should totally be the same, but unfortunately, it’s not. But it is coming back and there’s a lot more interest, which is really amazing.

Let me ask you this: how come you and your sister are so smart?

(Laughs) Honestly, I’m pretty sure it’s my mum. She was like really, really on it, she was a good mum.

During the time when I was getting my degree, that was when I stumbled into the whole acting thing.

It was just seriously out of the blue. So, my cousin is Jason Momoa who plays Aquaman.

In the movie Aquaman.

Yes. All through high school I was really interested in film, and if I was going to a proper university, I wanted to study film and photography and he (Jason) kind of knew that. And I’d done a couple of short films that he’d seen and helped with in high school. He kind of always had in the back of his mind that I was interested in film and all those kinds of things, but I never wanted to act. That was like the last thing in the whole process that interested me.

Why did you not want to act?

It just never occurred to me. I like to be behind the camera. I just never had a background in it. I definitely had friends that were in theatre, and I always thought it would be fun to do that, but never like acting in front of a camera.

Are you a shy person?

Or were you a shy person? Better question.

Sometimes I think I am really shy, and then other times I find that I’m not. I think it really just depends on the scenario. I guess with modelling, since I’ve been with Roxy for so long, I’m not really shy in front of the camera because I’m working with people who are legends that I’ve known forever and love, you know? So, it’s hard to be shy in that context…

But performing, acting is different.

Yeah, I was really nervous.

Basically, he calls me up one day out of the blue—seriously, so random—and I think he’s calling just to say hi or tell me that he’s coming over for his birthday or something like that, but then he tells me how he was at a friend’s property in Joshua Tree and he came across this spot, like with a hawk feather on top of it, and his friend was like, ‘Woah, that’s so crazy—this is the spot where Carlota was shot in 1908.’ And Jason was like, ‘What are you talking about?’ and his friend tells him this whole story about a Chemehuevi indigenous girl from this area of Joshua Tree who had gone on this crazy long journey running away from US and tribal police with her soul mate because they had a forbidden relationship…

So, he tells him this whole story, and I guess he’s so enthralled that he immediately wrote a draft script for a movie (The Last Manhunt), and I guess during the whole process of creating this script he was envisioning me as the character to play the girl. 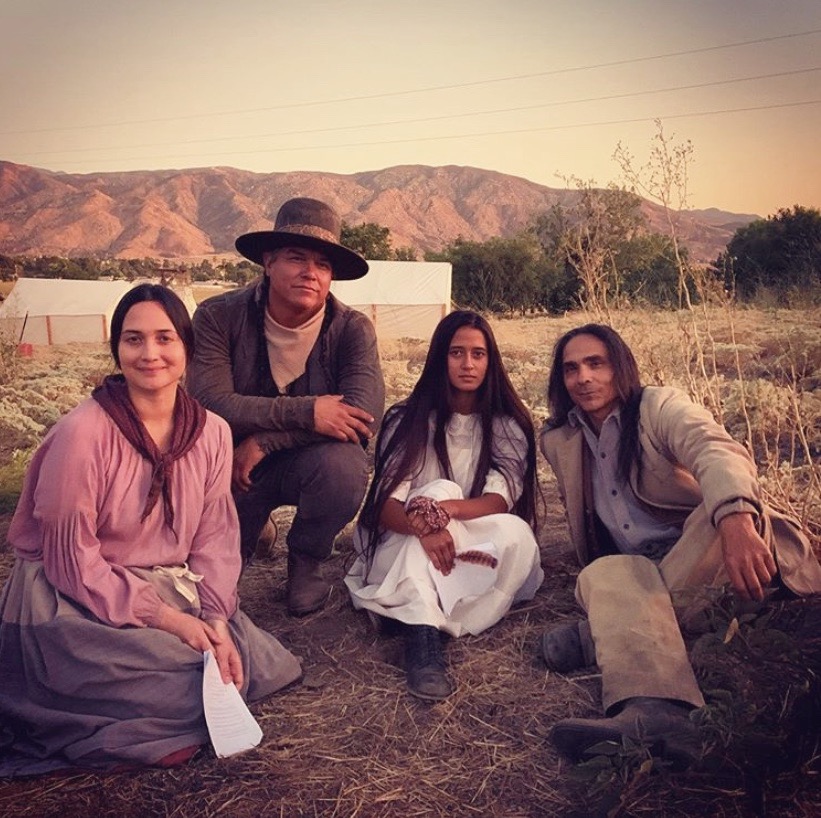 So, he just called me up and asked if I wanted to do it. It’s really funny, because he’s like, really pushy, in a way that’s very nice but also terrifying.

He’s really nice and super outgoing and very creative; he literally has the most energy of any human being I’ve ever met. It’s ungodly. He’s just like this huge ball of energy. Basically, he just called me and didn’t ask if I wanted to do it—it was like ‘Hey Mainei, so I just thought of this story, da-da-da-da-da-da-da—and then you’re gonna do it. You’re gonna do it right? It’s gonna be so great! Thanks! Bye!’ And then he hung up the phone. He kind of gave me no option, but I was like, ‘What the heck.’ I didn’t really wanna do it, because I didn’t really know what I was doing.

Did you have to have acting lessons?

No, that was the thing. He didn’t want me to take acting classes, because he wanted to preserve my natural disposition. Acting classes can be really weird, and culty sometimes, and people can, I dunno, weird you out… I guess he didn’t really want for that to affect me. So I didn’t have any acting classes, which was really kind of scary because I didn’t really know if I was doing something wrong or something right. But his suggestion was that I move to Canada with him and work as his assistant on this show called See, Apple TV’s tent pole series. So that was where I did my learning, I went over there, and I was his assistant for seven months in Vancouver; the winter of Vancouver. I’ve never lived anywhere cold in my life.

I’ve been to Vancouver in winter and it’s not very pleasant.

No, it’s just rain, rain, rain. I did that for seven months and basically just watched him all day on set, and all the other actors too, and that’s the best way to learn: observing.

And are you a good actor?

Alright, well I’ll wait until I see you in action and give you a call back for a critique.

So, the basic storyline of the Apple TV show, See, is that no one can see and that a couple of children are born with the gift of sight? Is that right?

And that creates havoc because I assume people want the sighted children because of its power, is that it?

I just watched the trailer, it looks amazing.

Let me ask you this though: how come everyone in See looks really cool and they’re, like, ornamented with beautiful jewellery and stuff—but hang on a minute, if you can’t see what are you doing wearing jewellery on your head? Good question.

I dunno, they can just sense it. They’re like, ‘This rock feels really cool, it feels like it’s got some cool energy.’

‘Hmm. I like whatever this is on my finger—Feels good. Guess I’ll keep it.’

‘Oh, this makes a cool sound…’

Everyone has amazing haircuts too.

Honestly, there’s people who probably have that all sorted out, the exact answer to that.

One last question: Mainei, what are you gonna do now? Are you gonna be an actress, continue surfing for the rest of your life, lobby for the Hawaiian language to become mandatory in schools? Are you going to become political? What’s going to happen?!

Oh god, I wish I knew. I wish I knew the answer to that, holy-moly. This worldwide shutdown has kind of given me a chance to think about it and I still don’t know. I’ll always surf, but Hawaii and my culture will always, always be number one. At the end of the day, my biggest goal is to do something that’s going to give back to Hawaii in a positive and impactful way.