‘Wake up every day and it’s the same. Reality is pressure in my brain,’ Dan Cunningham screams while strumming the chunky riff that is the backbone of a song called ‘NRVSNRG’.

It’s a pressure-cooker of sound, lyrically and sonically built around the theme of nervous energy and high pressure, which is a recurring theme in his songs. This is Arse, the three-piece Sydney band who play a particularly confronting and somewhat experimental brand of bass-driven punk. They’ve been aptly described as, ‘equal parts dumb, terrifying and fitting for the times.’

Dan works in hospitality, an industry that’s often characterised by high-pressure working environments. On another track called ‘First World Fever’, he growls, ‘All I do is work. All I am is work.’

When I catch Dan on the phone for an interview, he’s at his house in Ashfield, in Sydney’s inner west, sounding comparatively mellow and unassuming. ‘That song was written at a time when I was working four jobs,’ Dan explains. ‘I was so burnt out, I was as burnt out as you could possibly be, I think. My life was defined by work.’ He says that at the time, he was working in a café by day, two bar jobs by night and full-time study.

‘Sometimes I’d be working two jobs in a day. Working during the day, until the afternoon. Then I’d work right through until midnight in the bar. It was fucked, I was so angry.’

The song is mostly autobiographical, but it’s also partly about the standard white-collar career path that people like him are expected to follow after going to a Catholic School and getting a degree. He explains, ‘A lot of my good friends and family have gone the very, very typical path and I’ve seen the toll that that’s taken on their spirit… A lot of them are fucking miserable. And if they’re not saying that out loud, it’s manifested in all these other areas of their lives, with substance abuse and things like that. I’m really interested in that story.’

Formed in late 2016, all three members of Arse—Dan, Jonathan Boulet and Tim Watkins—grew up in the Hills District, which is a leafy and fairly unremarkable area on the north side of Sydney. Dan describes it as, ‘so boring, you can’t imagine’ and goes on to explain that it was the heartland of the world-renowned evangelical church Hillsong. Dan says his family didn’t go to the church but Jono’s and Tim’s did. Hillsong had a high-budget youth group and they threw concerts every Friday night, and that was about the most interesting thing to do for a teenager growing up in the Hills District at the time.

Apart from being a conservative, Christian area, Dan says that growing up in the Hills District was characterised by a decade of commercial construction and re-development. ‘All the nature got ripped up for the M2 motorway, which went right through the guts of where I lived,’ he explains. ‘By the time we got to high school, everything was very white. I don’t think I ever ate any kind of Asian cuisine until I was fifteen or sixteen.’

Knowing all this, it’s easier to place Arse in context; they sound like a violent reaction to boredom and conservatism, an outlet fuelled by anger and excess. And Arse could only have come out of Sydney, a city that is great in many ways but which has become inseparable from its well-documented flaws: unaffordable housing, rapid redevelopment, financial stress and state government corruption. In the band’s Spotify bio, they describe their home city as ‘dystopian Sydney.’

‘I’ve lived in Sydney my whole life pretty much,’ says Dan. ‘We moved up the coast to Port Stevens, near Newcastle, to my in-laws place, to save money. And it’s funny how you realise that there are very viable ways of living outside of the city that don’t require the kind of insanity that we’re oblivious to in Sydney.’ He continues, ‘I kind of had a fucking nervous breakdown going back to Sydney, going back into the rat race, which is when all that stuff was written.’ 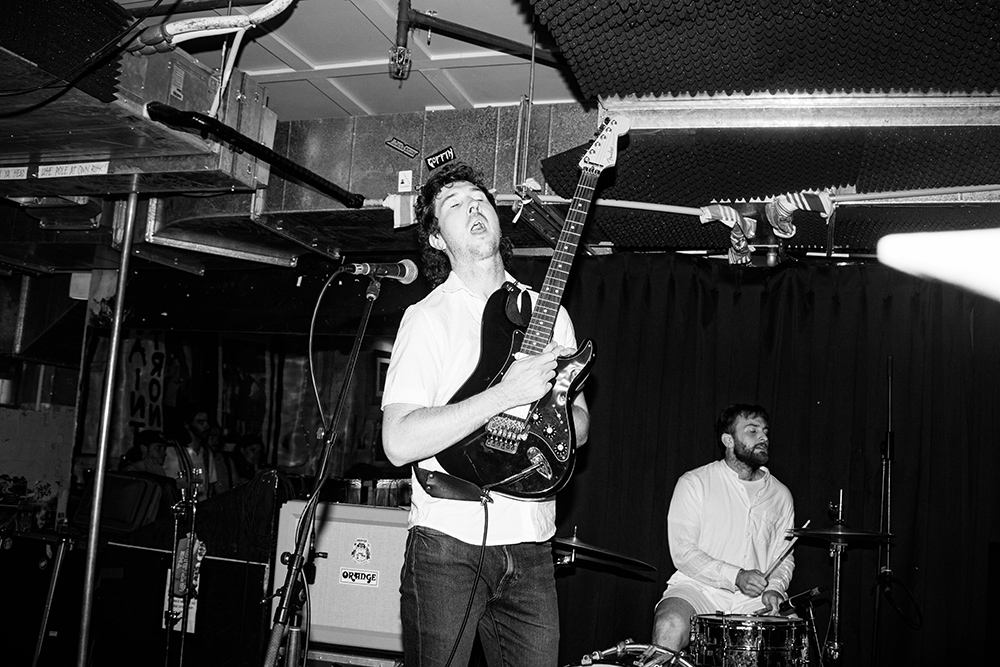 Arse’s last release was a five-track EP in 2019 called Safe Word. It’s about the excess that is so prevalent in the hospitality industry and beyond. On the title track, which builds and builds with drum fills, Dan roars, ‘I need the safe word. I’m about to get fucked.’ He explains, ‘It’s about going too hard with all our vices, which I’m certainly guilty of, as is everyone I know, particularly in the industry that I work in.’

A few days after our interview, Arse are going into the studio to start recording a new album and it will almost certainly be dark and weird. At thirty-two-years-old, Dan and Jono (bassist) have been playing music, together and in different bands, since they were teenagers. At this point, they want to push boundaries and get experimental.

Fans of Arse would probably never have guessed it but Dan and Jono started their music careers in the indie pop scene. Jono made music under the name Jonathan Boulet until around 2014 and he actually had a lot of success in that world—some of his songs now have over one million streams on Spotify.

‘He got real big, he got fucken huge,’ says Dan. ‘Kanye West Tweeted about Jono back in the day… I remember he played Splendour with that project and we were walking around Splendour and people were gawking, wondering if they could come up and get his autograph and shit. He’s the most down to earth, humble guy. But he’s probably been more successful in music than anyone I’ve ever met.’

Dan continues, ‘That’s where we started. We started with that weird triple j indie scene and all our friends today were part of that… We’ve travelled all over Australia together and we’ve had some pretty special experiences that people would kill for. But we’ll never have them again because we’re too old and we’re just not interested in that music anymore.’

That indie pop sound is about as far from Arse as you could get. Dan says it was great at the time and he made a lot of friends through that scene, but that some of the music he made is slightly embarrassing to him now.

‘There’s some fucking terrible shit of me on the internet from that era of music, don’t you worry… Nobody wants to see a 30-year-old play indie pop music. It gets to a point where it gets a bit sad,’ says Dan, which makes me laugh. ‘It’s true,’ he insists. ‘At this point, we may as well go hard on the weird stuff.’

Arse’s new album will be out through GRUPO Records sometime in 2021.