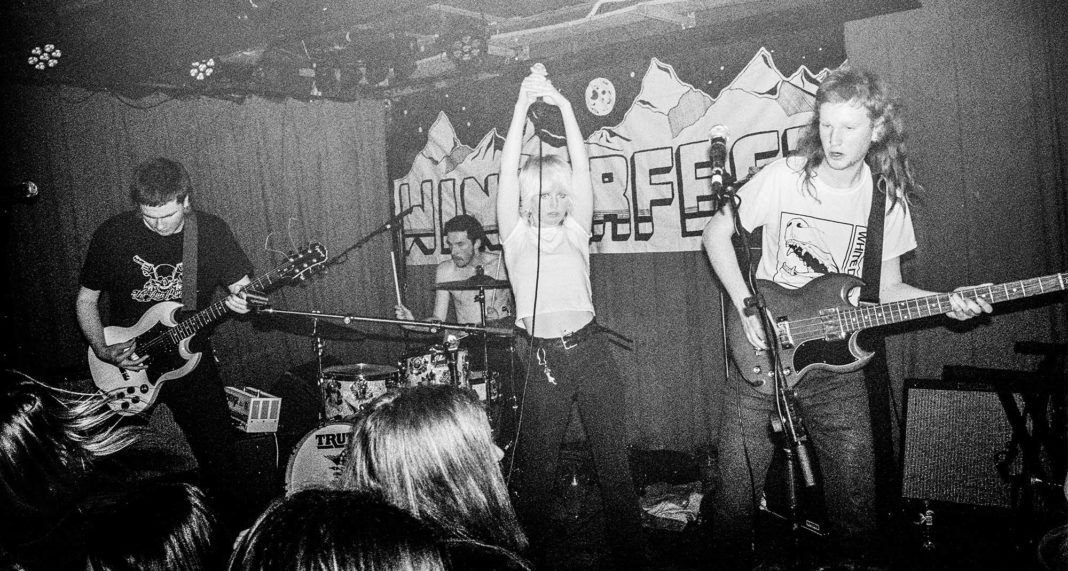 My favourite Amyl and Sniffers song is called ‘Mole’.

It’s not as catchy a ‘Westgate’ or ‘Balaclava Lover Boogie’, rather, it’s a fierce, 47-second rant that advocates violence in a way that’s unmistakably Aussie and so relatable that it’s a little confronting. “Rack off mole / I wanna see some biting, I wanna see some biff,” Amy Taylor yells over an urgent three-chord riff. The lyrics could be confused as flippant or sarcastic, but Amy insists she’s serious. “It’s about this chick that I was hanging out with and I got really fucken sick of her so it’s a bit of a biff song.” She pauses for a second, then clarifies, “Well, not a biff song, but it’s like, ‘Fuck off, bitch.’”

‘Mole’ is also about Amy’s preference for audience participation at her shows: “I just want everyone to push each other and go nuts and have a go,” she explains. “I don’t want everyone to just stand there and chill.” Amyl and the Sniffers gigs aren’t supposed to be chill.

A bit over a year ago, the members of Amyl and the Sniffers were living together in a sharehouse in St. Kilda. They’d been talking about starting a band “for ages”, then one day they all got home from work, uni and whatever else they’d been doing and spontaneously wrote and recorded their first EP. They called it Giddy Up and Declan, the guitarist, was still wearing his Big W uniform when they finished it. It took them just four hours to get the whole thing done, after which they released it for free on Bandcamp. “We were like, ‘We’ll start a house band, play at parties and it will just be something funny we can do,’ ” Amy explains. 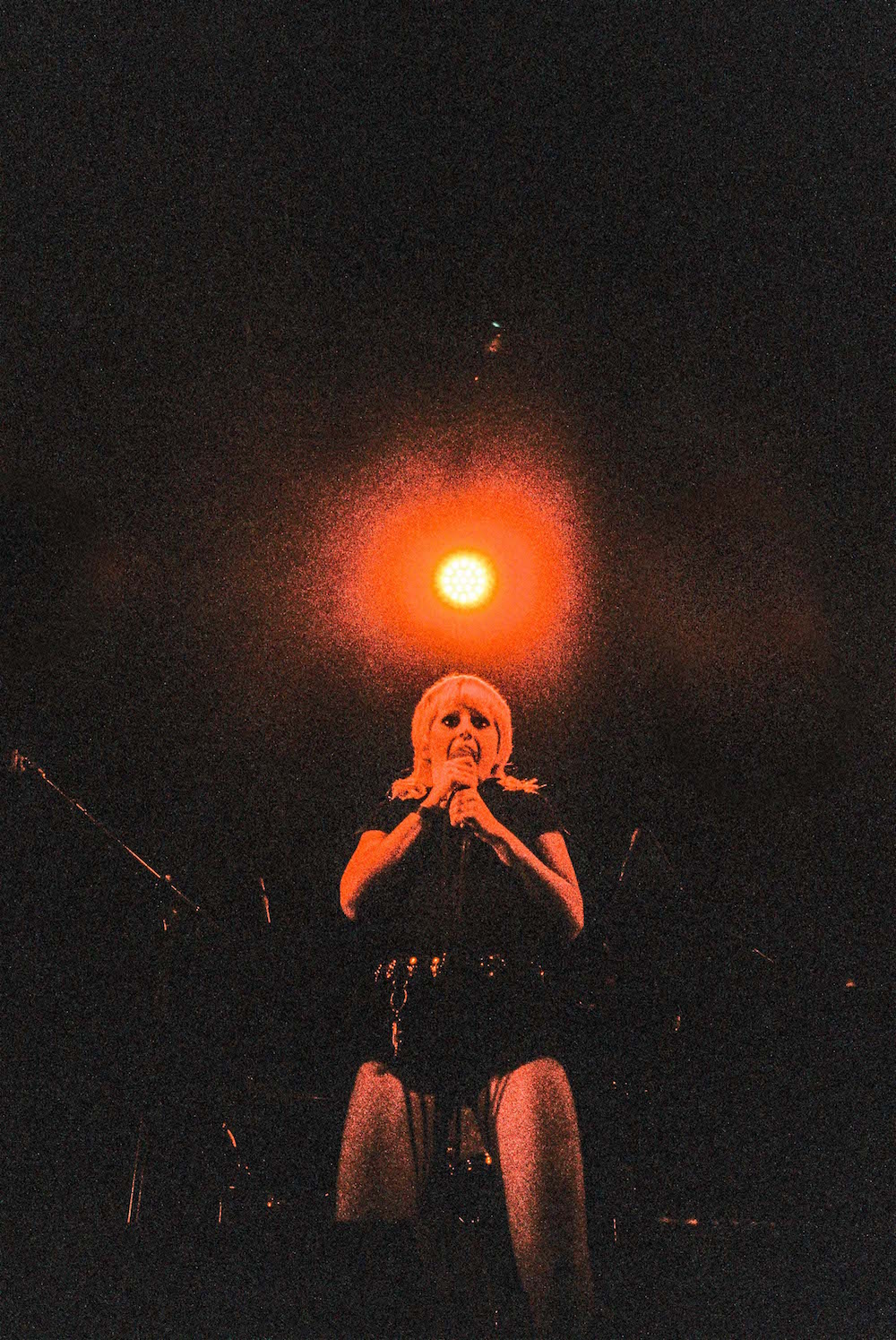 “I don’t really know what the fuck has happened between now and then,” says Amy, “but it’s crazy.” Indeed, Amyl and the Sniffers have some pretty big gigs lined up: they’re touring with the Aussie punk legends, the Cosmic Psychos in November, then playing Gizzfest, Meredith and touring with the Foo Fighters in January. In addition to all that, they just scored a deal to put out a tape with California label Burger Records.

None of this would be particularly surprising if they were playing the kind of radio-friendly rock and roll you commonly hear on a station like triple j, but Amyl and the Sniffers are a garage punk band who sing about biffs, blowjobs and Chiko rolls. They’ve all got mullets and they look like the sort of people who could drink a Tasmanian skateboarder under the table. They’re proudly sporting shitty tatts and they named their band after a seedy drug that provides a brief, intense euphoria, followed by a brutal headache—which may or may not be a metaphor. They give off the vibe that while they’re stoked to be playing gigs, they’re not taking any of it too seriously.

With the mullets, the aggression and the unflinching embrace of Australiana, Amyl and the Sniffers have been likened to the sharpie subculture of the ‘70s—a pre-punk movement that was birthed in Melbourne and characterised by “sharp” outfits and that quintessential Aussie larrikin attitude. The soundtrack to this era was Australian boogie: bands like Skyhooks, The Coloured Balls and AC/DC. Amy says she and the boys are definitely influenced by that ‘70s Aussie rock, but lyrically, she’s also intrigued by the storytelling of country singers like Dolly Parton; she likes the cheek of a Southern woman in the 1960s singing about cheating on her husband.

Amy grew up in Mullumbimby, a small town just north west of Byron Bay, which, coincidentally, is also where I grew up. We agree that the music scene in Northern NSW always seemed to be wildly polarised—a typical gig was either some soul-surfer guy with an acoustic guitar or a brutal hardcore band playing an all-ages gig at the youth centre. At 15, Amy gravitated towards hardcore shows, “I was pretty into it because in Mullum everyone’s so focused on being chill and happy and nice, but I felt like that was the only scene where people were ok with being violent. I was like, ‘Yeah, this is sick.’ ”

Amy’s parents moved to Mullumbimby from Penrith, in Sydney’s west, which had more of a cultural influence on her music and style than Mullumbimby’s Aquarius Festival roots. “Dad’s a bit of a bogan, in the best way possible, he pretty much only listens to AC/DC, Snoop Dogg and The Angels,” Amy explains. “I feel like growing up in Mullumbimby I should be a hippy or something but I think I got more of the Western Sydney vibe.” 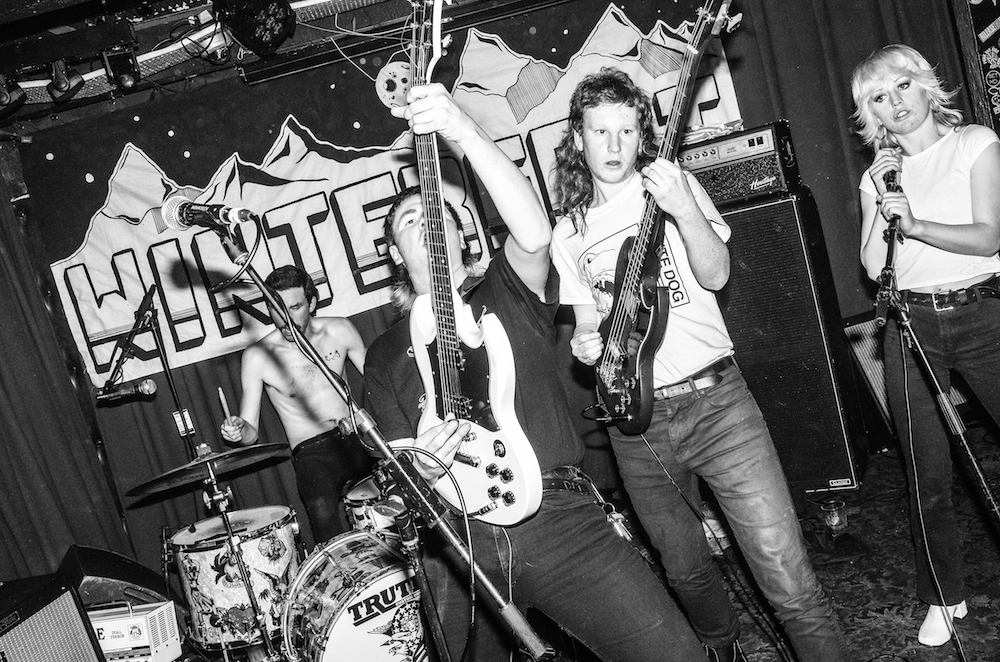 And what a vibe it is. Amy mentions her appreciation for shitty tattoos, muscle cars and touch-footy, which segues into a story about her favourite tatt—the words “GIDDY UP”, which she stick-and-poked into her own foot one night in her living room. “We were just drinking goon at home and I was pretty pissed and I was like, ‘I should do a tattoo,’ ” she says, “You can read it but it’s pretty shocking.” The boys in the band have similar stories, Amy explains: “The other night Gus [the bassist] got Bryce [the drummer’s] middle name tattooed on his leg.” The plan was for Bryce to return the favour but they ran out of ink so it wasn’t to be.

With the record deal and all those upcoming shows, I ask Amy if there’s any pressure to get more serious now. She says that while the band just want to “fuck around and have a bit of fun”, they’re also pinching their pennies for a tour overseas at some point. At the moment, there’s not too much holding them back. She explains: “Declan works at Big W, Bryce works at Woolies and me and Gus are unemployed at the moment so everything’s pretty casual. Like, we don’t take work too seriously.”

All photos by Jamie Wdziekonski