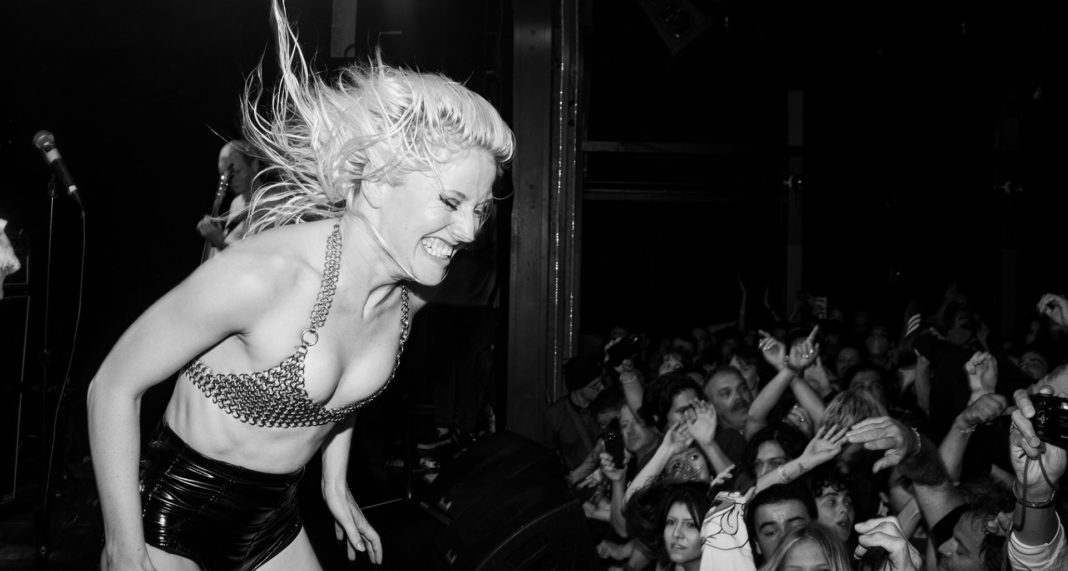 Amyl and The Sniffers are a raucous and formidable presence that moved swiftly from the local pub scene in Melbourne to international sell-out stages, festivals and acclaim.

The recent lockdowns saw the band move in together and come out the other side with Comfort To Me, a new album with more sentimental lyricism than their eponymous debut, but with the same pent-up, live-life-to-the-fullest energy and punk attitude the Sniffers are known for. Monster Children spoke with lead singer Amy Taylor in the lead-up to this year’s Splendour in the Grass.

Being such a quintessential Australian band, are you surprised at how much the international crowds have embraced Amyl and The Sniffers?
I think that’s why they like us to be honest. We sound foreign and sure some countries wouldn’t get what some of our stuff means but it still gets the message across. Even though it’s got the twang and stuff it’s still similar in terms of universal feelings or whatnot.

And what about all the swearing, I mean for Australia it’s the norm, but how has the rest of the world taken to it?
I think it’s weirder with UK crew, they come up and go, ‘Are you right?’ as in ‘Good morning, how are you doing?’ or whatever, but in Australia, obviously when you say ‘You right?’ it’s like, ‘You want to have a go?’ That’s a funny one, differences like that. But pretty much everyone knows swearing comes with Amyl and The Sniffers. Our favourite word starts with ‘C’.

Are women taken more seriously in the punk scene these days?
Yes and no. I think I still cop a lot of misogynistic stuff and there’s still a lot of things that aren’t really fair. I don’t know what it was like to play in the 70s, 80s or 90s but it’s probably getting better, because surely there are more females and people speaking up about stuff. I also think who gives a fuck? Because it’s going to happen everywhere; it’s happened my whole life, being surrounded by misogynistic people, including in the punk scene. There are still lots of assholes in the punk scene.

Is the punk scene a supportive place?
I guess it’s kind of nuanced. Some people aren’t very nice because that’s their whole façade. Just macho assholes like there are in any kind of scene. But there’s a rally with the good ones too.

Have you copped Australia’s tall poppy syndrome?
Yeah, sometimes. I try not to blanket it as tall poppy even though it is definitely a thing. But, yeah, I try not to blanket it as that too much because sometimes people just don’t like us for an actual reason and not just because we’ve moved past playing to 10 people. It’s also important not to use that to cop out because sometimes it’s good to listen and see how maybe we could do something better here or there. But I’ve come to terms that people will be jealous and I kinda don’t give a fuck because I’m really proud of what we’ve done. I’m really proud of the boys and myself. I’m having the best time, so it’s kinda like who fucking cares? People will always poke at that but who cares, because I’m having a fucking sick one.

You recently had artist Aretha Brown open up your London show to teach Brits some First Nations history, huge respect for bringing her up. Why did you do that and how did you find her?
Yeah, she came on stage with us. I read one of her articles about Gary Foley when he came up on stage with The Clash and kind of talked about Black history and Australia’s fucked up past; bit of colonisation talk and stuff. So, I knew she was in London and was going to come to the show anyway, and we talked about if she wanted to come up and talk as well. So, she came up on stage before the song ‘Capital’ and kinda gave a little spiel and was like you know Amyl and the Sniffers are from Australia but Australia has a dark past. It was really dope. It was Jubilee weekend, too, so she was like, ‘fuck the Queen’ (laughs). And the crowd absolutely loved it. That’s super important, you know, cause that’s the thing, across the globe—we’re being recognised as an Australian band, but it’s important for them to know what that means, and what that means to Indigenous people. Australia isn’t just a white mismatch of barbeques and beers. That’s a part of our culture, sure, but that’s not all there is to it.

Would you say you’re a very political person?
Nah, that’s pretty new. I wouldn’t even say political, but I suppose just more educated on things. As the band has gotten bigger, I realise there’s a big- ger responsibility. I learnt a lot of it myself. I’m political because I care, but not necessarily because I’m intellectual or articulate. It’s more just common knowledge that I’m trying to figure out and learn, because I feel like it’s my duty in the position I am in now. It’s not necessarily something I was preloaded with. I am very much still just learning everything and trying to listen to crew, but I think that is political in itself. I also think just existing is political, whether you do anything or you do nothing, both are political moves. I honestly don’t know the ins and outs of Australian politics; I barely know even how to vote but it’s something I care about so I’m going to have to learn.

Do you see yourself as someone that can bring about some change with the band and the following that you’ve gathered?
Yes and no. I am pretty nihilistic. I don’t believe in Utopia. But there’s power in music and power in lyrics that’s inspiring and encouraging and can change someone’s mind. But I’m not delusional about that fact the me singing about my points of view is going to be the catalyst for fucking capitalism to come down or anything. But I do know that a lot of our fan base is super varied. We’ve got the political activists from Melbourne and the hipsters from Brisbane and truck drivers from Perth. When a truck driver listens to something like ‘Knifey’, they might go, ‘Oh true, maybe that’s how a lady feels, sometimes that would be hard,’ you know? We can kind of reach a variety of people. Some American shared a video on Father’s Day of their dad playing the guitar to us and the caption said, ‘I showed my right-wing, gun-loving, Trump-voting dad Amyl and The Sniffers and he actually liked it.’

Behind the tough exterior of the band, there are heartful lyrics on Comfort To Me that speak to climate change, mental health, sexism, and it’s all a whole lot more vulnerable. Was that a conscious shift from your previous album? Do you think that introspection during lockdowns motivated that?
There was a lot of change in the last couple of years. I think I grew up a lot and understood myself a bit better. I went through some really hard times. Before, I think I was just kind of blanket angry at everything, like, fuck, fuck, fuck, but now it’s a bit more pointed like fuck this, fuck that, fuck yeah.

On the spectrum of punk, where do Amyl and The Sniffers sit?
When we first started, we never really called ourselves ‘punk’. We thought we were just a garage pub rock band. But when we started going international that category kind of came about with the press. I think even punk can be quite limiting and restraining, though. I have ideologies and attitudes of punk. I’m punk but I don’t have to do a real job and I’m really pumped on that but at the same time if I wasn’t doing this, I would happily be a manager at a Coles supermarket, you know what I mean? It’s complicated. I am from a working family and I would do anything for a job essentially. So, I guess pub punk? (Laughs) pub punk feels right to me.

What is the most punk thing you’ve witnessed from your audience?
I have seen some crazy shit. I won’t say what because I don’t know if it’s offensive, but Manchester fucking went off. That’s all I’ll say.

Is there something you want to achieve with Amyl and The Sniffers?
I think to just keep going. I am really excited by it. With all the tall poppy stuff and all the judgement and all the hard stuff we gotta do to be here, I just want to see what can happen and how far we can go. I really like writing songs. I like playing the small stages. I like playing the big stages. I like playing music. I like trying to figure out myself a bit, figure out people, get a bit more empathetic, which happens when I write music. I just want to see how much we can do.

What do you do outside of Amyl and The Sniffers that gets you hyped on life?
I love books so much, to be honest. I never read books before lockdown and now I’m fucking hooked on them. It’s taught me empathy and stuff, which I don’t think I had a lot of before. Watching a movie with my boyfriend and having a cup of Earl Grey tea—that’s living to the fullest. I’m a simple gal.

Alright last one: who cuts your hair?
Well, I haven’t had a haircut in a little while actually. I was just looking at it then when I got out of the shower. I bought scissors at the chemist yester- day, so I might get Declan: [Martens, guitarist] to give me a trim. Now that I’m getting a bit boujee, I go to a hairdresser. Our tour manager gives us haircuts when we need them (laughs) but usually just Declan. I don’t actually know if he’s any good but he’s got thinning scissors, so I figured he must be alright.

Anything else to sign off?
Umm, I just wanna say, yeah the girls and my non-binary friends.