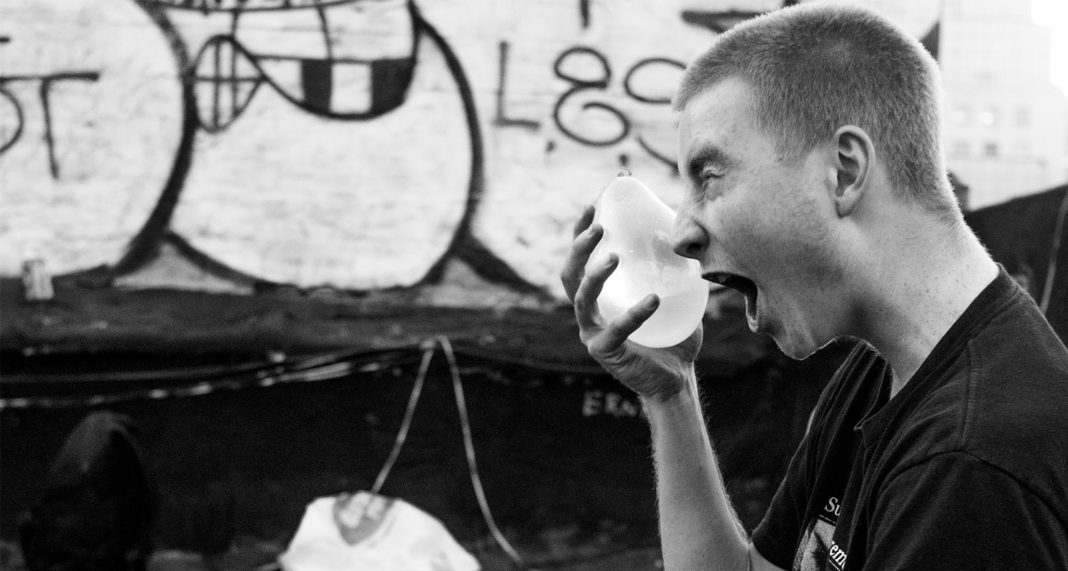 Words and photos by Andrew Peters

I keep forgetting Aidan Mackey isn’t even allowed to legally buy booze yet, but he’s the biggest pisshead I know in LA.

At least the one that’s proud to admit it. The first time I heard of Bag (Alexander Riley/Rilebag /bad ass ginger) was by asking how the hell Aidan could buy himself beer and cigs. This senior ginger from the same hometown of Pasadena was the answer. These dudes are like two peas in a pod. The smartest, dumbest dudes I know. If the following interview is evidence of how much fun gingers have, we should probably try a little harder to preserve this obscure, rare and dying breed. 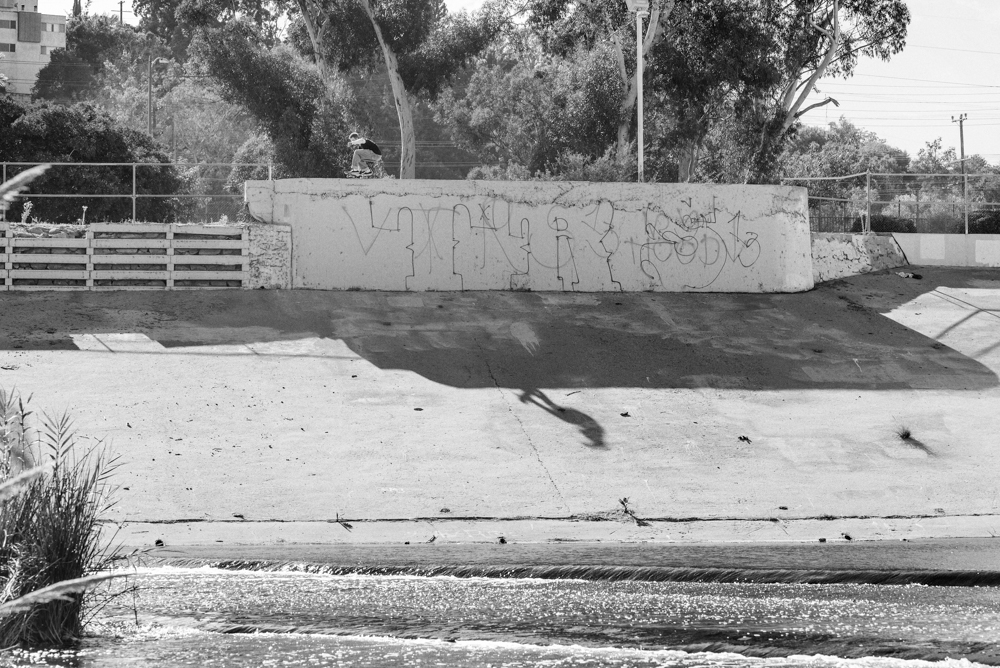 Aidan: Were you really a mistake?

Aidan: How much money do you think I spend on you a day?

Aidan: What would you give it though? 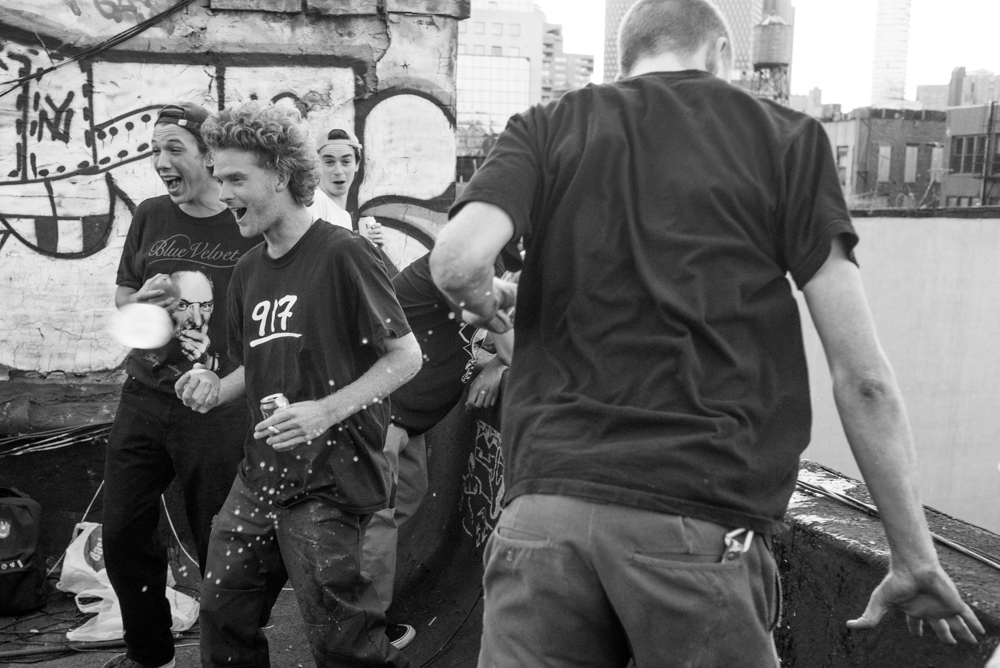 Bag: Hmmm more. Maddie or Mara, which one do you love more? (Aidan’s sisters) 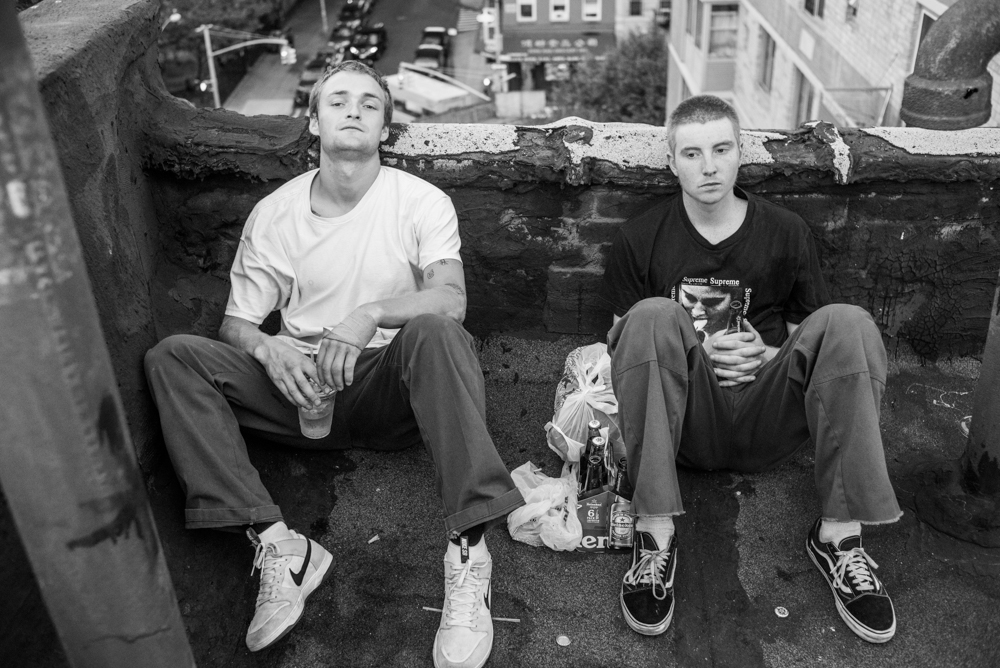 Aidan: Damn, family questions. I like them both. That’s fucked up. Biggie or Pac?

Bag: Pac’s got some dope beats and he’s from the West Coast.

Aidan: Technically born on the East Coast though.

Bag: But Biggie’s innocent and he’s dope as fuck. I don’t give a shit, I like everybody. 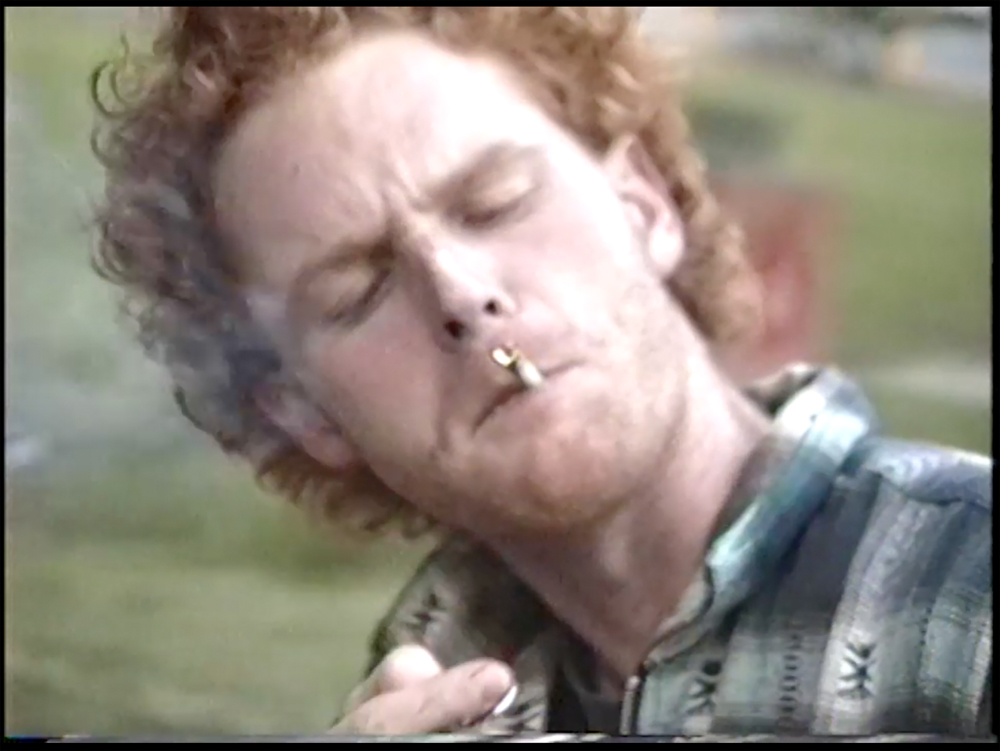 Aidan: Would you rather quit drinking or smoking cigs?

Bag: Drinking. Smoke cigs till the day I die, every single one of them. I was thinking about it earlier, remember when I gave you so much heat about only smoking American Spirit. Fuck that shit, American Spirit can go to hell, if that shit was gone I’d smoke every 27 in sight.

Aidan: He was telling me the other night that if American Spirit stopped making cigs that he’d stop smoking and I was like “That’s bullshit you’d smoke”. 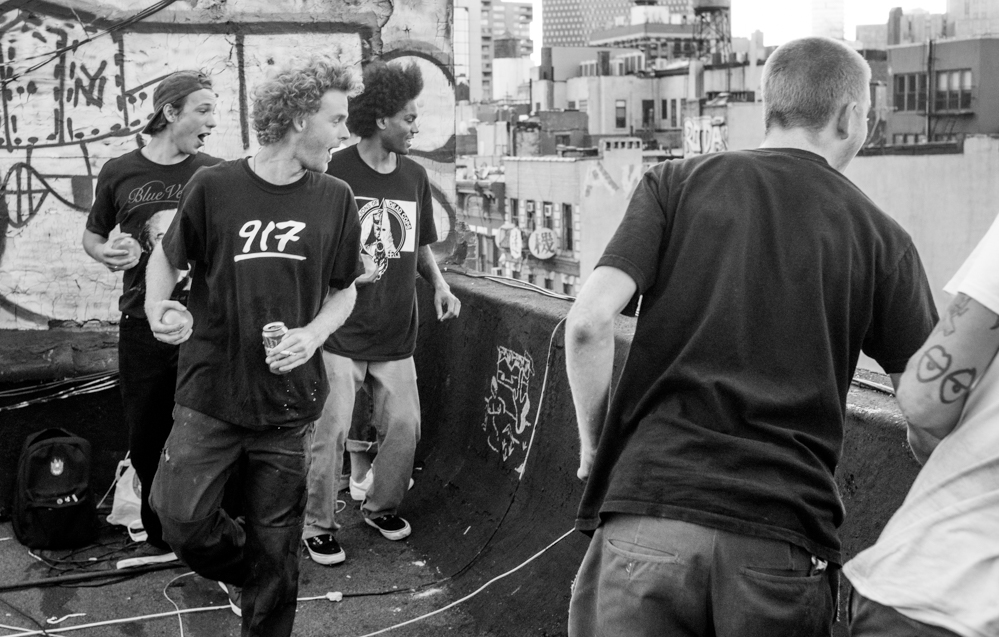 Bag: It’s kinda true though, I love this (points at American Spirits) but I guess if I didn’t have a cig and you had another cig I guess I’d smoke it cause I’m a freak and I want smoke, but I’d hate it. If you handed me an American Spirit I’d suck you down right there in the street, I don’t give a shit. At the same time, smoke is dope. I don’t know why, smoke is so heinous and awful.

Aidan: Would you rather wear girl’s underwear for a year or high heels for a month?

Bag: Girls underwear for a year, are you shittin’ me? I’d just wear tighty whities, granny panties. High heels, you can’t get nothing done in high heels. You’d try to run cause you gotta take a shit, break your ankle and shit your pants. 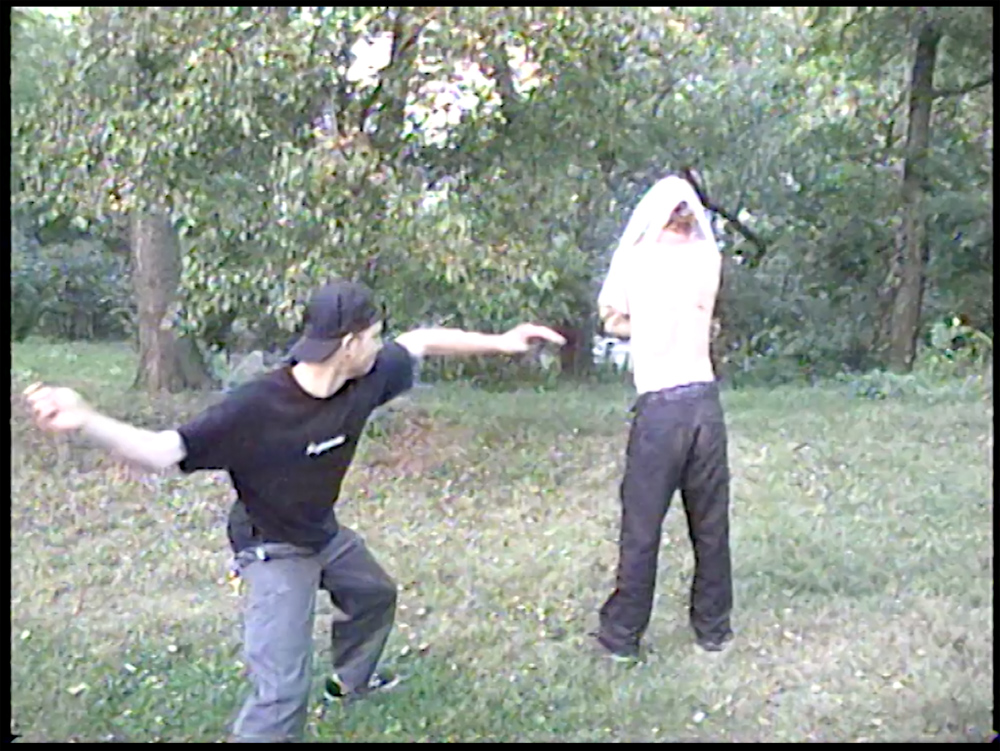 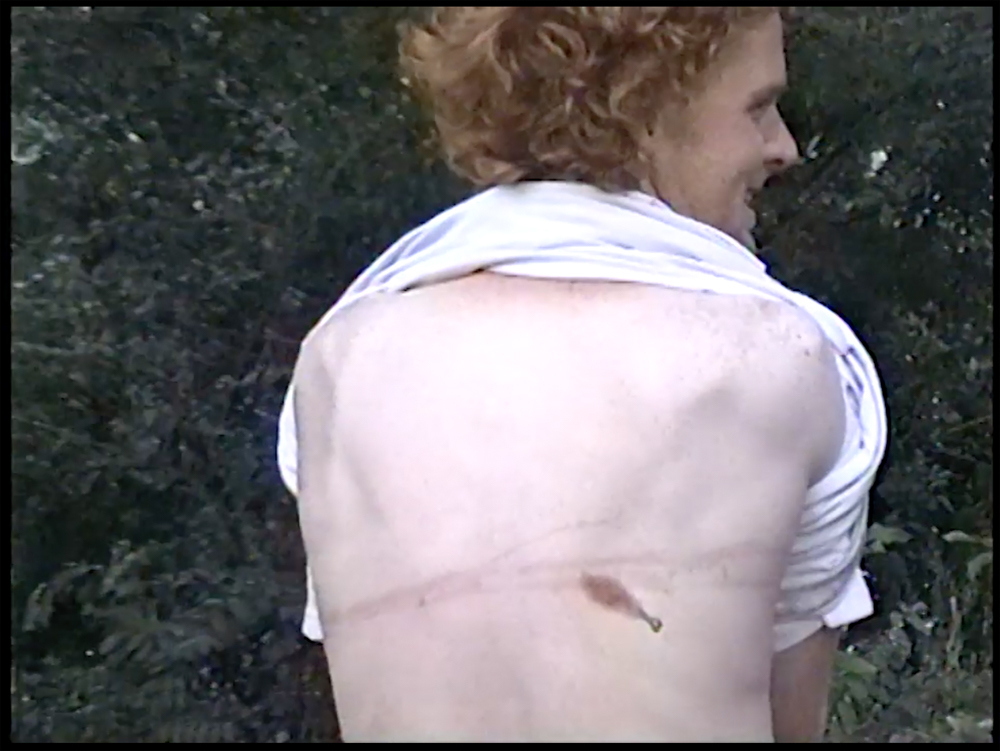 Aidan: How many run shits are you doin’?

Bag: I dunno, but I feel like that’s gonna happen if you’re stuck in high heels. Underwear, no one’s gonna know that shit, keep that shit hidden for years. How do you know I’m not wearing women’s underwear right now?

Aidan: I would definitely kick you in women’s undies. You were in your undies tonight, imagine if I was like, “alright film this skit” and you’re like, nah I can’t. I guess the skit would have been better actually. You’ve got the silkies on. 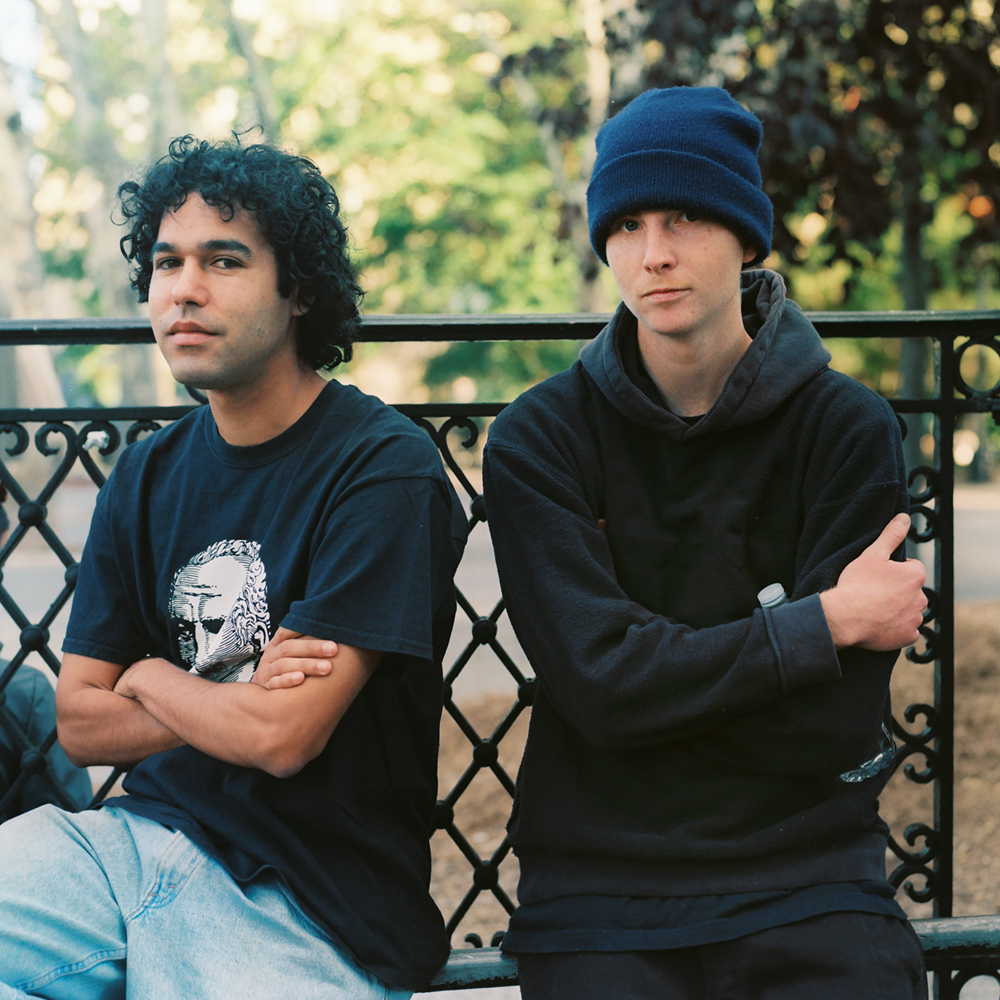 Bag: Peters (photographer Andrew Peters) left his house and we just filmed all these skits.

Imogene Von Barron: You should have just jerked off in his bed.

Bag: We had some ideas.

Aidan: That was one of them.

Bag: Had to keep it kosher for the gram. Otherwise it’d get deleted. 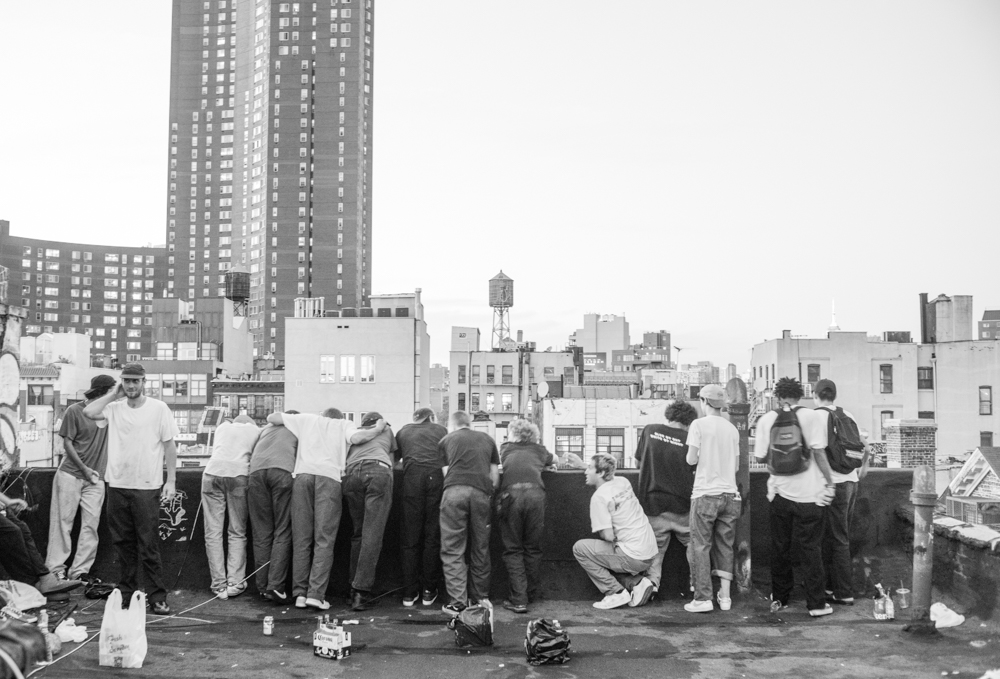 Bag: Oh we got some eyeball footage for sure.

Bag: We wanted to film more skits but it kept escalating. Hmmmm some questions for Aidan. I’ve got so many, but I’ve got so much smoke in my eye too.

Aidan: Have you jerked off in my house? 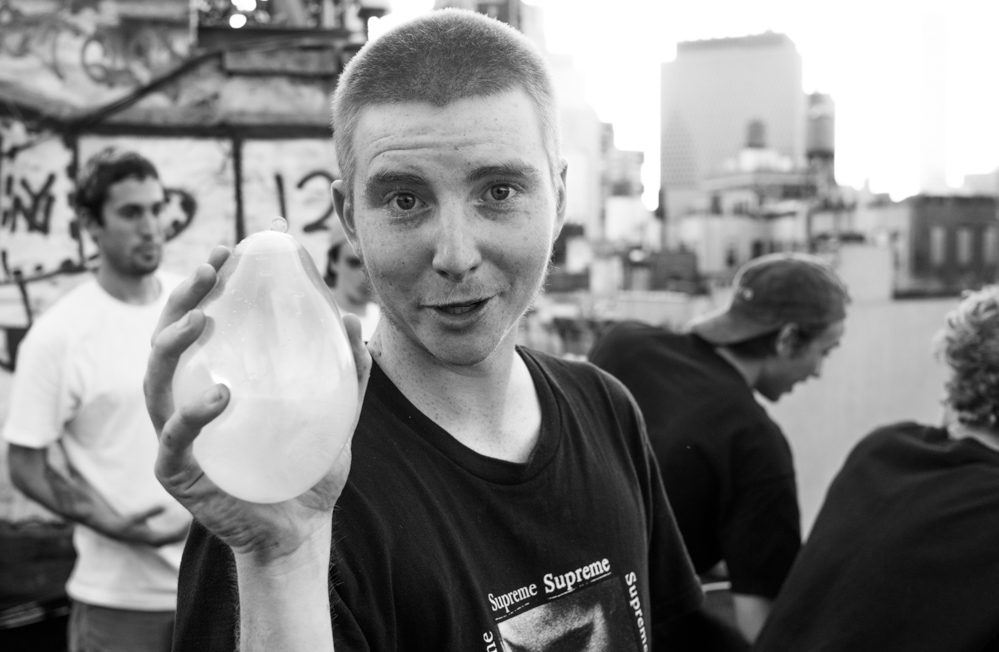 Aidan: I don’t believe that.

Bag: I don’t think I did at least.

Aidan: I’m pretty sure one time you came down and told me “I jerked off”. 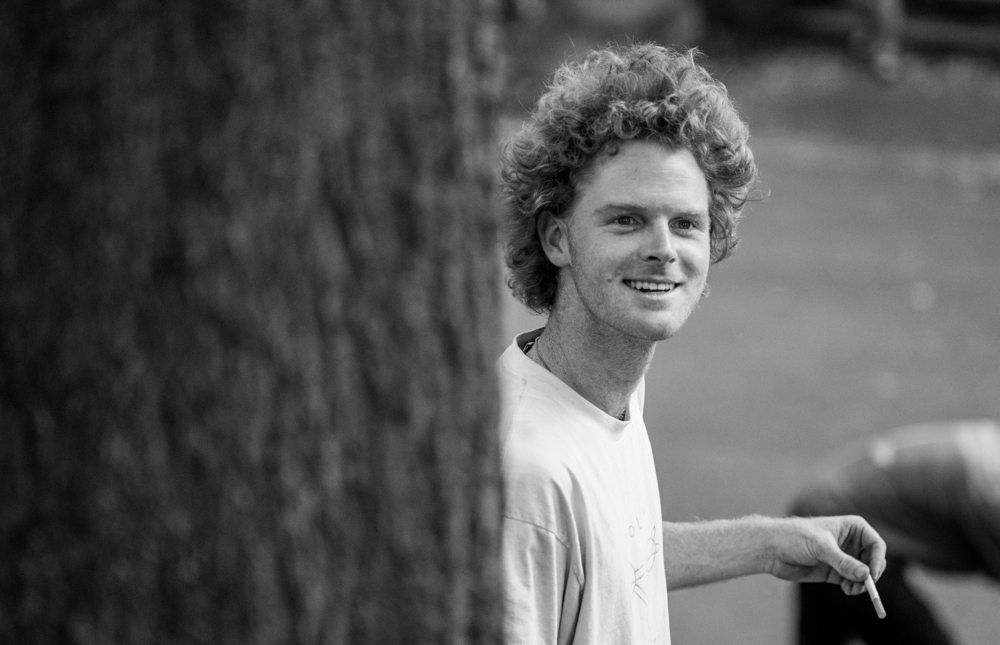 Aidan: Have you ever been caught?

Bag: No. I’ve been caught turning off the computer really quick. 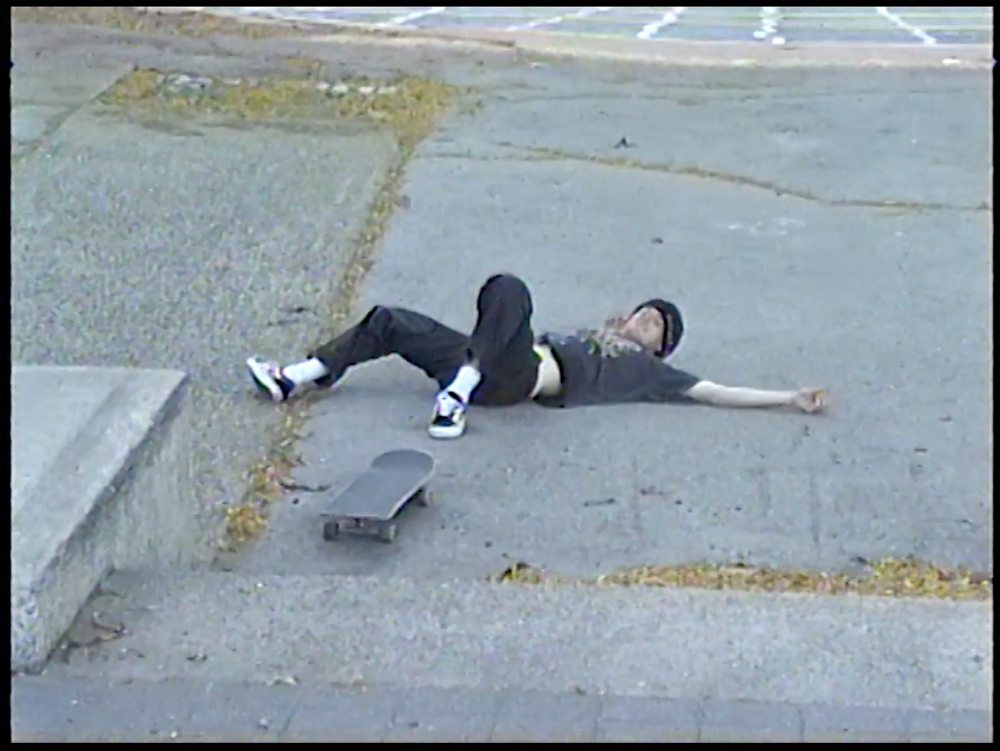 Aidan: Same. It was so fucking tweaked. By who?

Bag: I was in the living room and my stepdad came home and I was like, dude. No, but the weirdest place I have, one time we went to Orcas Island and I lost my skateboard ‘cause I was just fucked up. On the way home to Washington we went to this one skatepark but I didn’t have a board. So everyone went and skated and I was just in the car and I was all fucked up. So I got out of the car and went into the handicap port-a-potty and just jacked off in there. 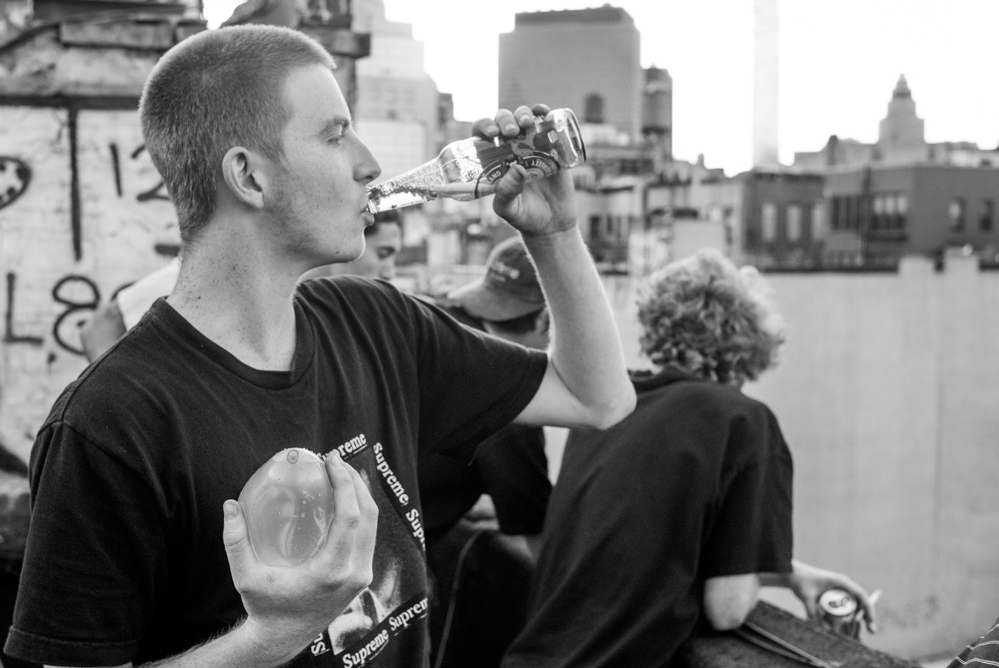 Aidan: It smelt all bad in there.

Bag: Probably. At like a kids’ recreation center at the skatepark. Shitty, honeybucket- port-a-potty, destroying myself.

Aidan: Just going to town in the youth recreation center. Smells like hell and you’re just going for it, staring at a piece of poop, jerking off.

Bag: So awful. One time when I was dating this girl I visited her in her hometown and we banged during church service in the bathroom at the church.

Aidan: Ok, so you’re going to hell for sure.

Bag: That was like, more wrong then jacking off in the youth center honey-bucket. You’re not go to hell for that, that was my own Honey-Bucket, and I locked the door. Imogene I’m so sorry. This is rare stuff. Got any more questions? Where’s the weirdest place you’ve jerked off? 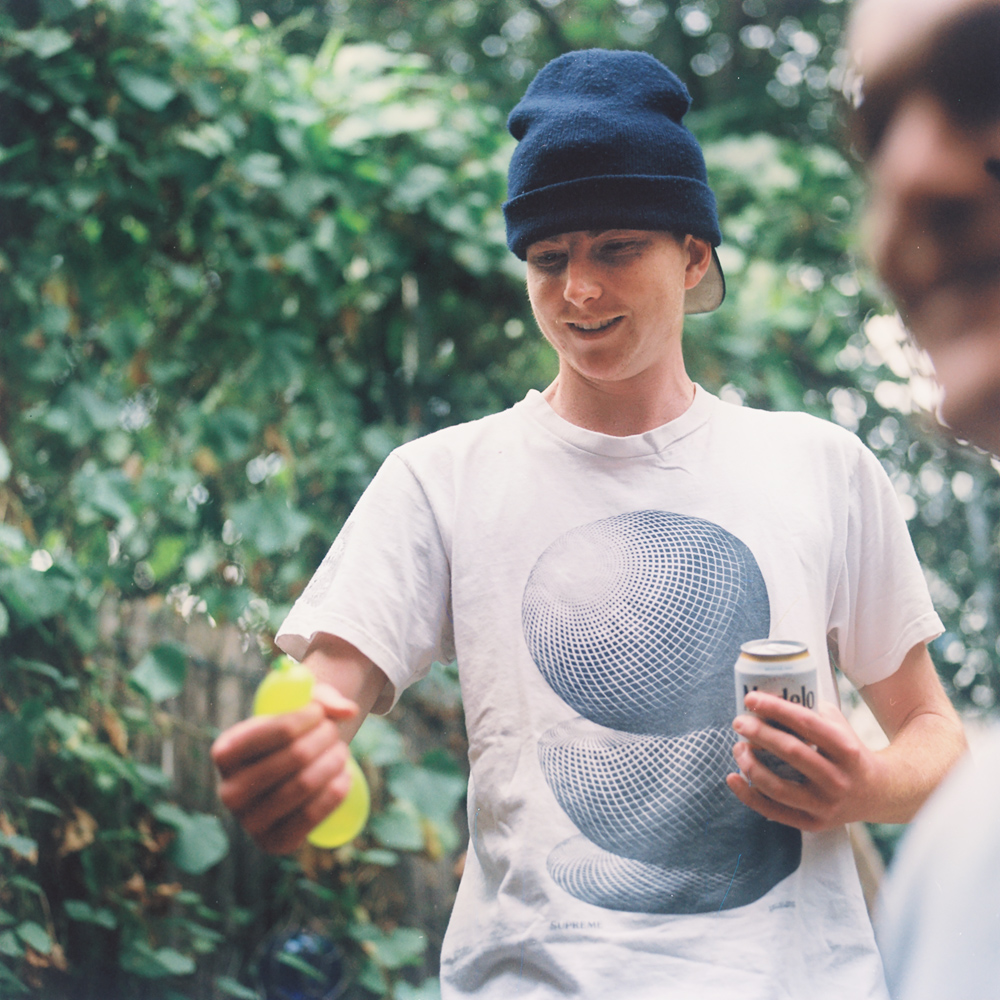 Aidan: I haven’t really done anything that crazy.

Bag: That was just heat of the moment shit. And an airplane for sure. From here to Spain, I swear like four times I hucked some of myself.

Aidan: The sketchiest place I’ve ever jerked off is definitely just at a homie’s house. Like Santi’s house or something. We were asking this question one night at Sean’s mom’s house and everyone was like “yeah I’ve jerked off here”. Everyone that was at the house had jerked off there and Sean was like “what the fuck, why the fuck have you guys all jerked off here.” We’d all done it there over the years. I’m sure you’ve done it at Grady’s house a million times.

Bag: Exactly. It’s hard to think of questions unless you want to know something about someone. What makes you curious about us? (to Andrew) 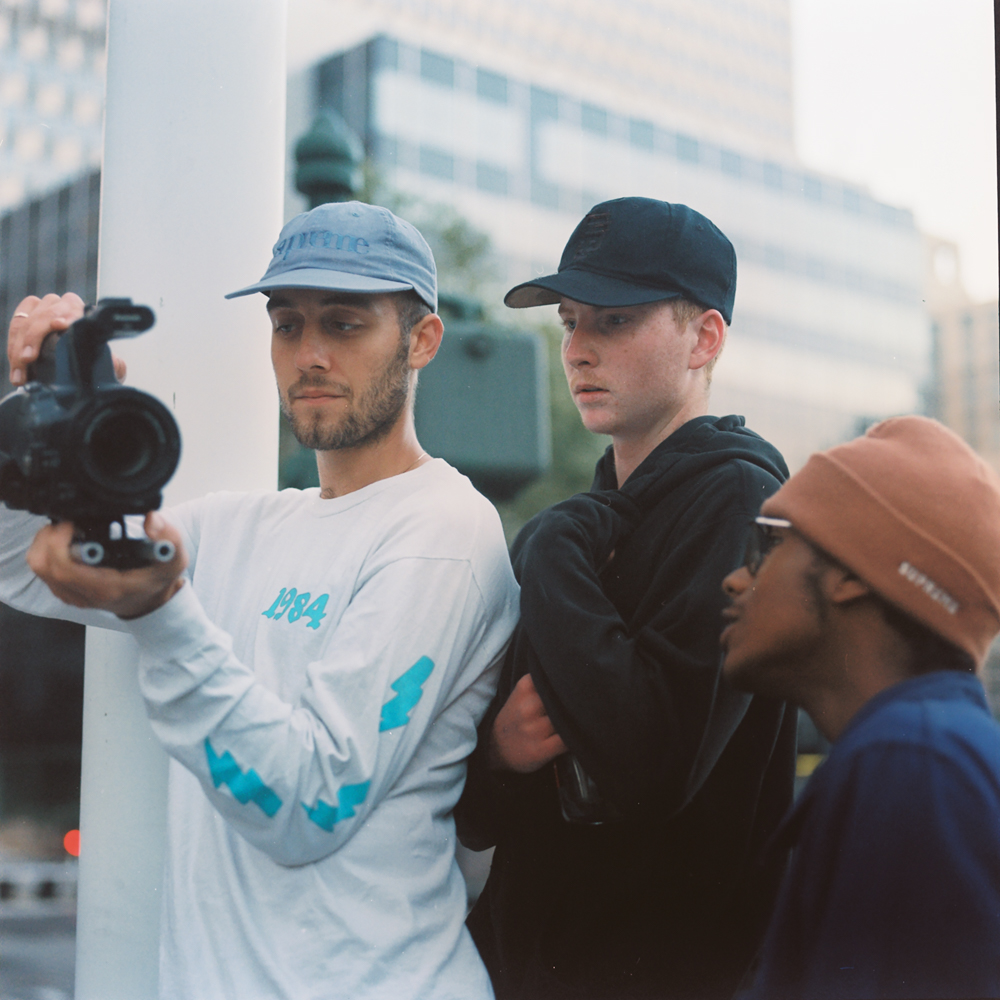 Peters: I want to know what it’s like to be a redhead.

Bag: Not much different honestly, and honestly you’re an asshole. That’s giving me a lot of anxiety. I have this idea, but I can’t pitch it to Pixar cause they’ll just steal it.

Bag: You’ve seen Ratatouille? You know how it’s set in France and cooking is huge, it’s like big time cooking. Well, it’s not a sequel, but it’s a continuation of this world of rats. My first one is Mexico and it could be called Los Ratones and it’s this group of Mexican rats, and they make a band and their family doesn’t like them playing music but they form a Mariachi Band and move on from their family.

Then they learn about the rock scene and start getting into the underground Mexican rock and punk scene. And then they start touring and they’re in France and there’s a cameo from the other rats and they go to the restaurant and eat at the Ratatouille restaurant. That’s all I have so far. Los Ratones. A lot of the ideas kinda get a little racist. I was thinking of stories for China and stuff and then realized they can kinda get dark. They’re all rats so to actually illustrate it would be kinda racist. 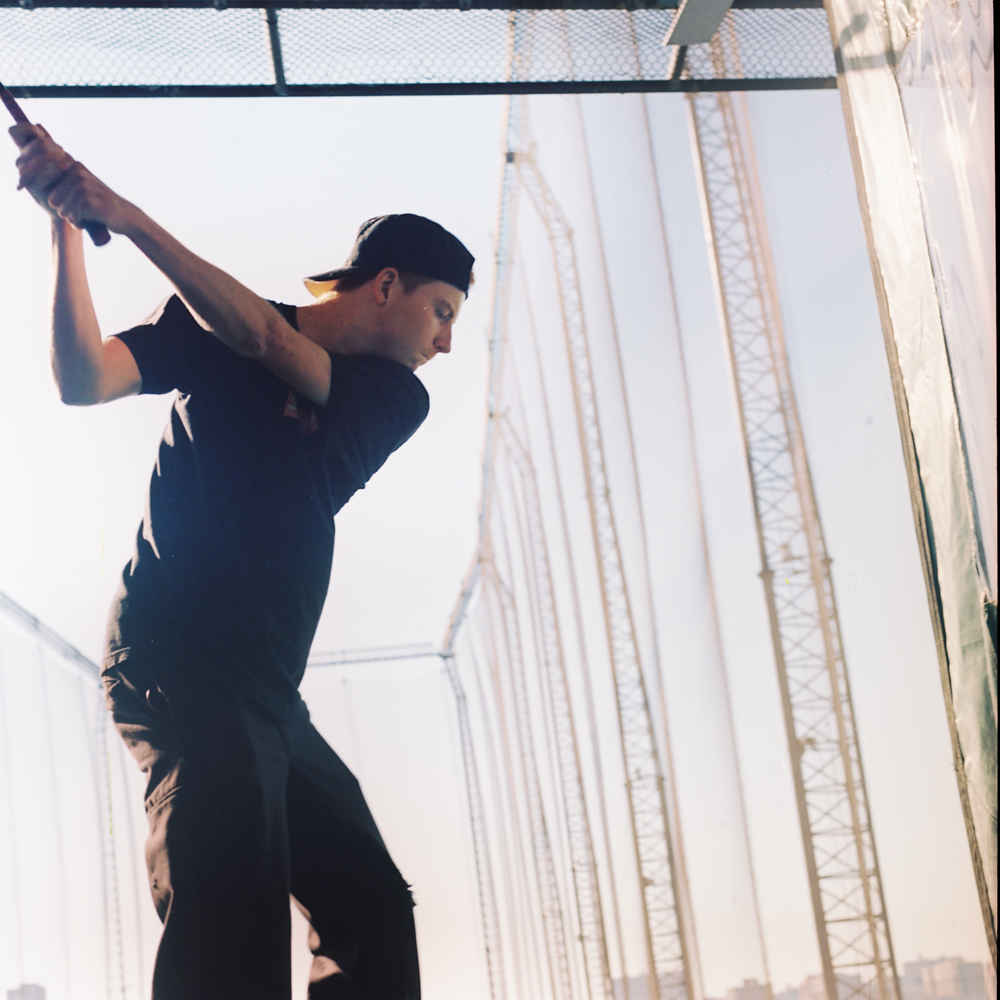 Aidan: So you gave up on the idea.

Bag: Kinda. I feel like we could do it for Ratatouille 2.

Aidan: Should we just do it ourselves and sock puppet it? The really racist sock puppet.

Bag: You could do so many rat movies about stuff in their culture. I’ve thought of a lot but most of them are racist. I’m trying to polish the edges.

The real-life version of Ratatouille. The New York rat in Mexico.

To see more from our 2017 Photo Annual, you gotta buy it here. 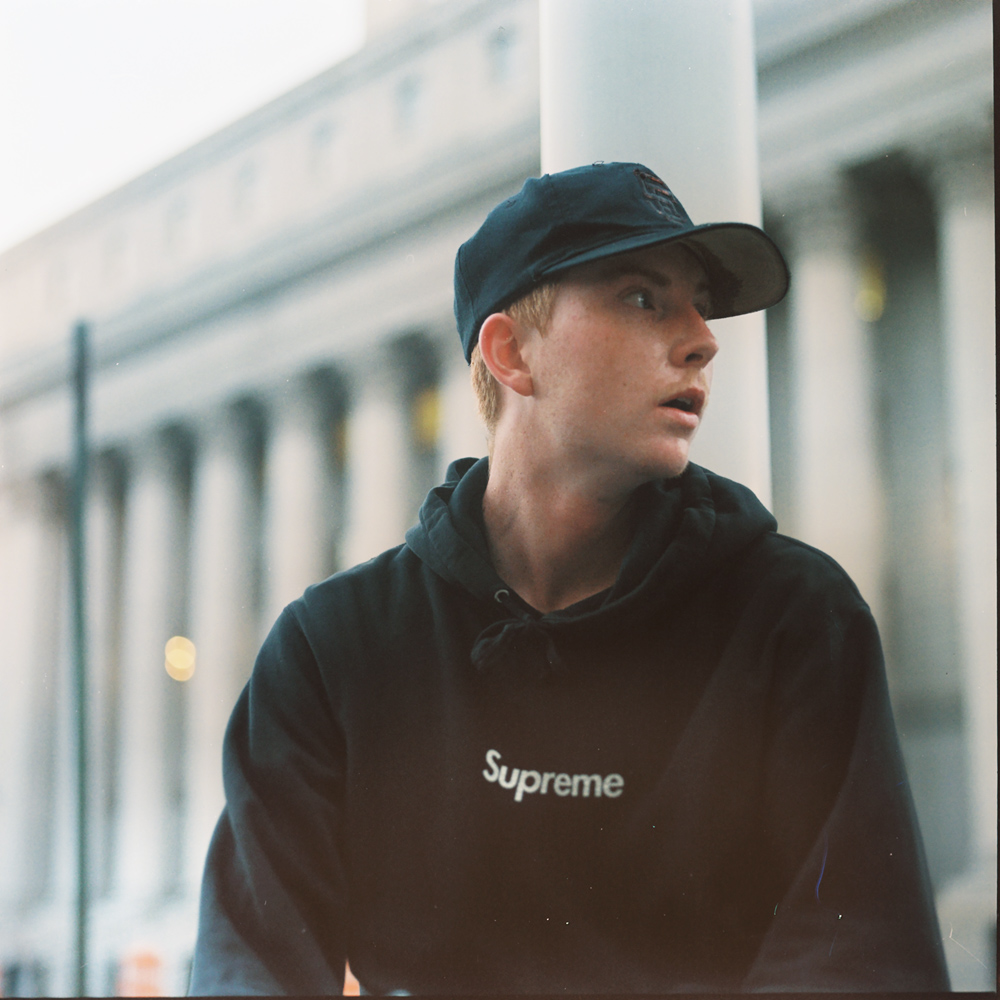