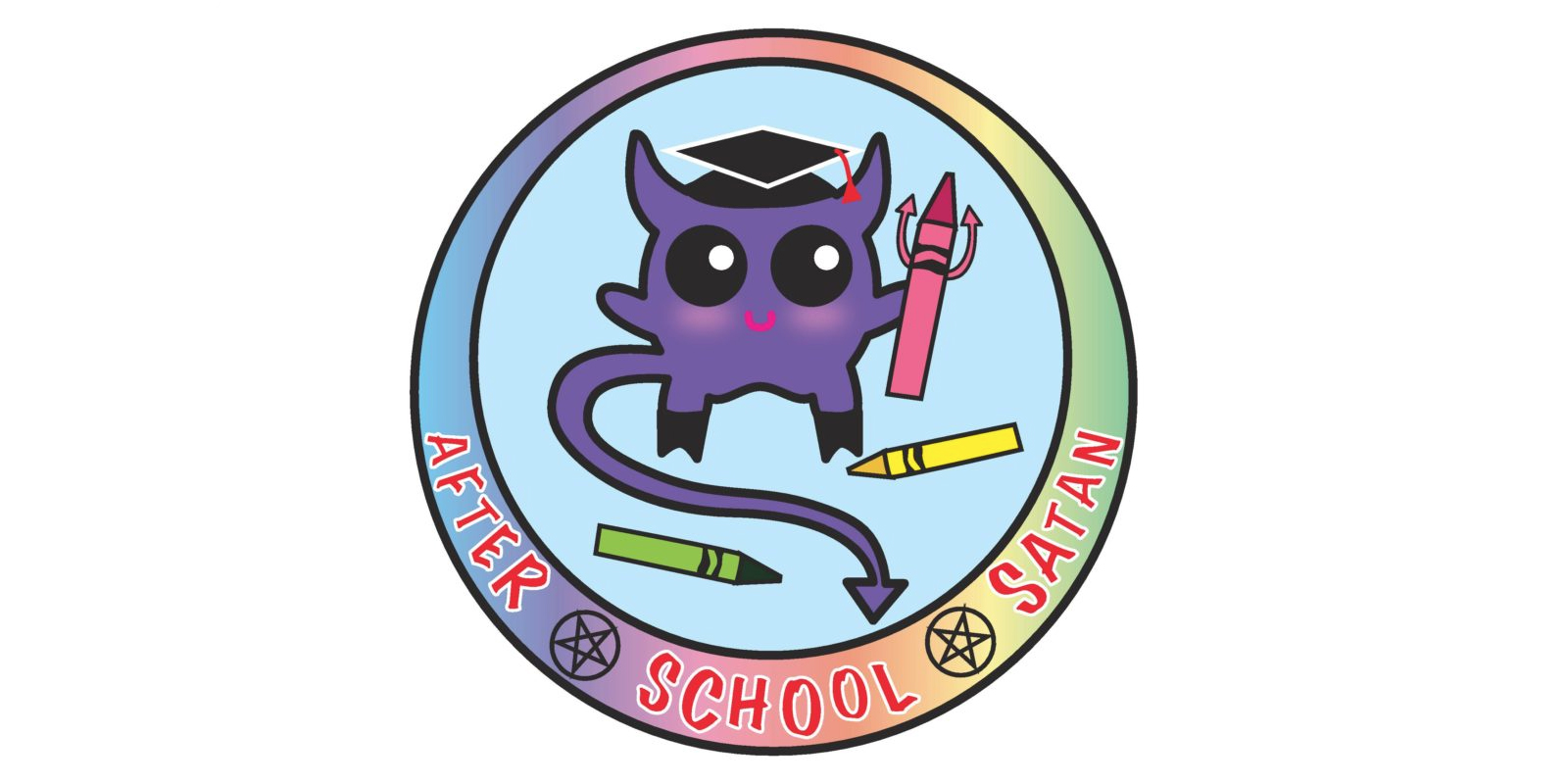 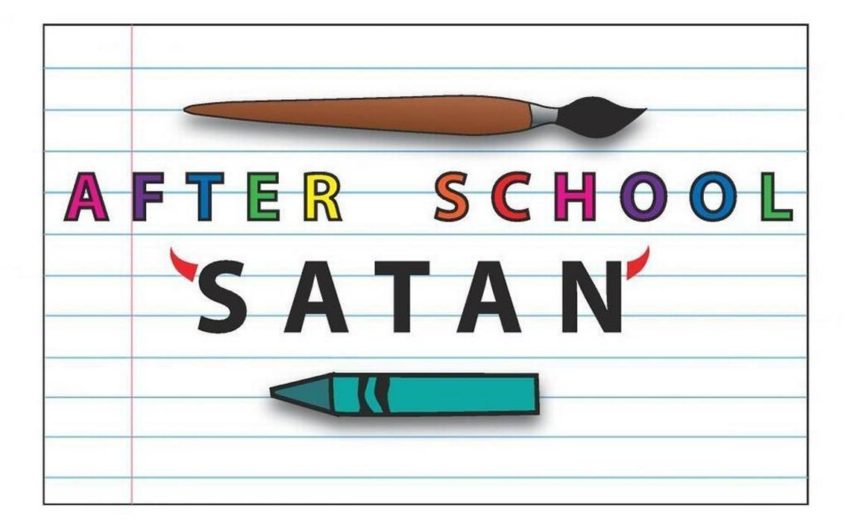 You may have seen the headlines recently that the Satanic Temple is fighting to bring an extracurricular program called ‘After School Satan’ to public schools across America.

Before you get your god-fearing girdles in a twist, get out the bolt cutters and pry open that rusted padlock that’s been affixed to your mind since birth. Our kids deserve to know the truth (spoiler: dinosaurs are real), and the evangelical ‘Good News Clubs’ currently operating in schools across the US sure as hell aren’t telling it. We spoke with the Satanic Temple’s founder, Lucien Greaves, to discuss their program’s purpose and curriculum, and why fundamentalist zealots are way scarier than Satan could ever be.

To be clear, the After School Satan Club curriculum does not contain items of religious opinion, insofar as we offer no commentary upon religious practice, customs, or mythology. Our curriculum focuses on fun activities that teach children critical thinking skills, cultivate their curiosity, and help them to develop a sense of scientific exploration. Children certainly do not need to identify as Satanists to be part of our after-school program, and we’re absolutely not interested in proselytizing. We uphold science as the best arbiter of truth claims, and one should always be prepared to revise their beliefs based upon the best available evidence. In contrast to the Evangelical “Good News Clubs” which indoctrinate children with a twisted, subjugating fundamentalist form of superstition, we hope to provide children with the cognitive tools to appreciate and better understand the natural wonders around them. With that all said, however, we view Satan as a metaphorical icon for the eternal fight against tyranny; so the goal of After School Satan Clubs—developing freethinking autonomy in the face of oppressive superstition—is every bit in line with Satanic principles.

How did the Satanic Temple come to be?

We originally thought we could be more like Anonymous: completely non-centralised, a type of banner that various types of Satanists could fly in fighting similar Church/State battles. We felt we were filling a very distinct and obvious need, but even we underestimated how strong that need was. Our numbers have grown at a remarkable rate in a very short time, and managing The Satanic Temple has become more than a full-time responsibility.

There has been national outcry after you requested to establish After School Satan Clubs in elementary schools across the U.S. Why do you think everyone is so upset?

Not everybody is upset. In fact, since we revealed our designs to put After School Satan Clubs in school districts that host Good News Clubs, we’ve received an outpouring of positive response; offers from volunteers, some of whom are parents or educators, and requests from various people asking that we bring the After School Satan Club to an evangelist-occupied school district near them.

Happily, we’re finding that our clubs are actually attended by enthusiastic children whose parents are fed up with fundamentalist zealots trying to convert their children to some horrific backward superstition. What isn’t generally recognised, is that there has been a huge population of parents trying to bring this problem to the public’s attention for a long time. Aside from the journalism of Katherine Stewart (author of The Good News Club: The Christian Right’s Stealth Assault on America’s Children), there’s been remarkably little to alert the public that an extremist cult has infiltrated public schools and is training children to indoctrinate other children into sharing their primitive fanaticism.

Naturally, there has also been uproar surrounding the notion of an After School Satan Club, and some of it has been rather humorous. For instance, the so-called ‘Liberty Counsel,’ a group of evangelical litigators who claim to fight for “Religious Liberty,” quickly laid bare their hypocrisy by offering pro bono support to any school districts trying to deny access to The Satanic Temple. Obviously, they don’t honestly care about actual religious liberty, but are instead clearly attempting to establish exclusive privileges for their own religious point-of-view. But then, the Liberty Counsel are the same group of assholes who represented Kim Davis, fighting for her supposed religious liberty to deny marriage licenses to gay couples in Kentucky. Lobotomy-eyed Liberty Counsel chairman Mat Staver is also on record stating that the U.S. should have laws against homosexuality.

What do you think is the biggest problem with children being taught about Christianity without being offered a balance of alternative theories?

First, let’s not credit the Good News Clubs with merely teaching “Christianity.” The Child Evangelism Fellowship does not speak for all Christians, and they themselves are very clear about this. Of course, in the heat of public controversy, they will invoke the idea that they represent a Christian majority to help maintain the illusion of a populist voice, but in reality, they are a minority sect of fundamentalist zealots who don’t recognize anybody outside of their cult as ‘true Christians.’

They don’t believe that Catholics are real Christians, and they certainly don’t have any reservations in trying to convert children from differing Christian sects into their own. In fact, that is the very function of the Good News Clubs: they seek to indoctrinate children into apocalyptic fundamentalism at an age in which they are most likely to accept such an intellectually insulting narrative from an adult authority figure. Our own presence in schools where Good News Clubs exist offsets the impression that the irresponsible evangelical teachings enjoy exclusive sanction in the school or community. Children should know that there are other options. They should have the opportunity to learn various points of view so that they may ultimately decide what’s best for them at such a time in which they feel competent enough to do so. To coerce children into a specific religious affiliation is a form of child abuse is so ubiquitous that it’s unfortunately taken for granted.

What is the general proposed curriculum for these after school lessons?

As stated, we’re focused on critical inquiry and scientific rationalism. The curriculum contains basic character-building exercises, songs, and games. Typically, after we outline this basic curriculum premise, we tediously hear the same question again and again: “Why can’t you call it something like the After School Science Club? Why Satan?” The answer, of course, is that it’s the After School Satan Club because we’re Satanists, and we see no reason to hide that, or to apologise for it. We don’t see the “Satan” in our title as needlessly provocative. In fact, we believe our use of Satan serves a very positive social function. We simply don’t agree that traditional religions are the arbiters of all that is morally correct, nor do we believe that an outright rejection of traditional religious institutions is evil.

Throughout history alternative religions, heretics, freethinkers, and the otherwise marginalised have been beaten, burned, tortured, driven out, forced to convert, ‘Satanized,’ and falsely accused of conspiracies against the common good. Far from being a thoughtless insult against social norms, we view our embrace of blasphemy as a conscientious objection to thoughtless, harmful, divisive fealty to superstition. It’s long past time that we put aside our irrational fear of the Satanic ‘other,’ and learned to judge people for their real-world actions. Let’s compare the content of the Good News Club curriculum against that of After School Satan Clubs and see which lessons are truly based on education, and which are based upon authoritarian conditioning. Removed from its symbolic context, I don’t believe any semi-rational person would see anything objectionable in the After School Satan Club, nor do I think anybody could reasonably defend the depravity of the Good News Club.

Have you had many parents register their interest in sending their kids to a club since you’ve been in the news?

We have received quite a bit of interest in the program, but we can’t be quite certain yet what the enrollment numbers will be. We’re still in the process of securing our Liability Insurance before turning in our facility fees to the school districts. Then we’ll be able to register children.

If you could get one simple message across to a bible basher, what would it be?

Nothing could be less American than the establishment of a theocracy. When you drape your cross with an American flag, you defile both.

And last, any plans to go global with your movement?

We’re already global. We have international chapters that are established, establishing, and many more in the works. We’re not going away.